The remaining contents of my 400-count mystery box -- after I separated out the players I collect, along with the Mets cards -- contained a potpourri of years and brands, as you can well imagine.  And while it's not necessarily stuff I collect, that doesn't mean that I didn't enjoy it.  There were quite a few cards that caused me to pause and admire.

The above '87 Topps card of Fernando Valenzuela isn't exactly a "stop the presses" piece of cardboard.  Don't get me wrong, it's a fine card of one of the 1980s' best pitcher.  It's also my favorite of the All-Star subset designs from the era.  But, I mean, I have one or two of these already and I think it's safe to say most of us have seen this one kicking around.

I can't say the same for the other two Fernandos I received.

What are the odds of getting three Fernando cards, two of which are him at the plate?  The '88 Donruss is a nice shot of Valenzuela showing bunt, while we see the big man hacking away during his San Diego days of 1996. What I didn't know, and was astounded to learn, was that El Toro has 10 career homers to his name.  Two of which came during the '95 season, his first as a Padre.  Alas, if the photo on the '97 Collector's Choice card is indeed from the '96 campaign, the best outcome of that mighty swing was a double (he had two that year) or a long fly ball.

And speaking of pitchers at the plate:

Journeyman Robert Person shows his bunting technique during a BP session.  Man, these 1997 Fleer cards are puzzling to me.  Thin card stock, matte finish.  I'm not sure what they were aiming for with these attributes, but I don't find either one particularly appealing.  Which is a shame, because I really like the fonts for the design. 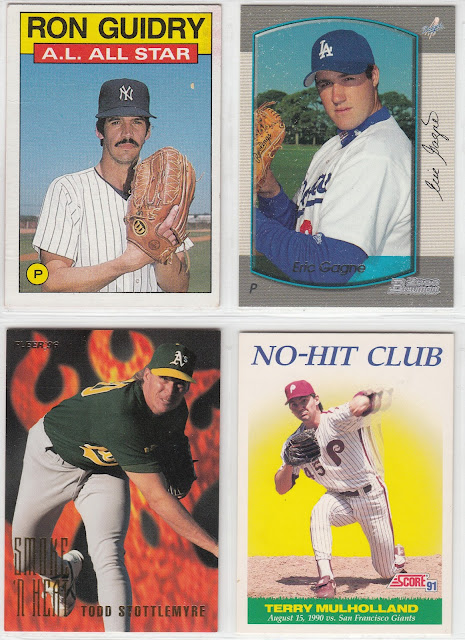 Here are some pitchers in their more usual element.  I hadn't even realized Todd Stottlemeyer pitched for Oakland, but pitch in the Bay Area he did.  For one season, 1995.  And it was a pretty memorable year for Todd, as he won 14 games and established a career high with 205 strikeouts.  Thus, a "Smoke 'N Heat" insert in 1996 Fleer.

Keeping with the pitcher theme, here we've got a pair of Diamond Kings from the late '80s.  I was a little bit surprised to learn that each of these guys -- both accomplished major league hurlers -- only landed on one All-Star team apiece.  Hough -- a winner of 216 career big league games -- made the AL squad in 1986, a year in which he won 17 games.  Bedrosian, meanwhile, not only made the NL team but also snagged a Cy Young award when he saved 40 games for the Phils in 1987.

Since I'm giving all this attention to the mound men, it's only fair to show some appreciation for the hard-working, underappreciated battery mates.  That O'Brien is one of my favorite photos from '88 Topps.  Just a classic picture of a true backstop captured during the calm of Spring Training.  Conversely, 1991 Score gives us a window into the hectic everyday of the catcher when the games begin to count.  Joe Oliver was one of my favorite backstops when I was growing up.  I think it had something to do with all the great baseball cards he had.

Oh, about that harried existence for a catcher?

Looks like Charlie Hayes gave some poor catcher the business here.  The dust is still settling, and who knows if Kansas City backstop has the bill in his mitt or if it's bouncing its way towards the dugout.

Meanwhile, this artfully doctored '98 Upper Deck specimen depicts Darin Erstad scrambling for his life back into the safety of the first base bag.  I really like this card, but I know a fellow blogger who might enjoy having this card for his collection more so than myself.

Speaking of that blogger, here are a pair of Padres:

Derrek Lee is fond of his bat in this Rookie Class card.  And while he'd only collect 14 hits in his short tenure in San Diego, his 1,959 career hits are plenty good reason to embrace your bat.  As for the Heritage '11, I was excited to find this in the box, but was bummed when I found that I didn't need it towards my set.

From Friars to Angels we go:

Fred Lynn's grand slam during the 1984 All-Star Game was the big blow to ignite a seven-run inning by the American League en route to a 13-3 victory.  I think you definitely deserve a "Super Star Specials" card in the Fleer base set if you play such a big part in baseball lore.  Especially in a time when All-Star Games mattered. As for Mr. Escobar, he's featured on a 2007 Topps Heritage card.  Man, I really love this reproduction of the 1958 vintage Topps design.  Then again, I guess I probably have expressed that sentiment about all the Heritage outputs, so it's not all that interesting of an opinion. [Ed. Note: See, I can be honest with myself about myself.]

He may not be an Angel, but Justin Upton looks like he's prepared for flight here.  I don't collect Justin Upton cards, but if I did this would certainly be among my favorites.  This is also another example of why I miss Upper Deck.  Great photo on a nice, clean design.

I got one serial numbered card in my box, and this is it.  The future was sure worth watching back in 2003 for Brandon Webb.  Five short years after this card came out, Webb was a 22-game winner and seemingly on top of the world.  I thought this guy would be at the top of some team's rotation for a very long time.  But, circumstance and the human body have a funny way of altering the future.

Here's some Bowman gold foil.  Ryan Klesko was a bright young star in the early '90s and, as the back of this card informs us, was fresh off being named the Southern League's Player of the Year in 1991.  And while he fell short of 300 homers and 1,000 RBIs for his career, he was still a pretty solid player for a good many years for both the Braves and Padres.

Todd Walker is the recipient of some love in the Twins dugout.  Either he's scored a run or contributed some sort of sacrifice hit or bunt.   Regardless, I like the photo Fleer chose here.

I have yet to crack open my recently purchased 2009 Topps complete set, but I'm even more excited to do so after seeing this Fukodome card.  I've never come across this card previously, and the same is true of a lot of the 2009 cards.  I can't recall buying any 2009 Topps packs back then, and that was also one year before I caught the set collecting bug.

Well there you have it.  For five bucks, I would buy one of these 400-count boxes all day long.  I'm sure another one or two are in my future.  It's certainly a lot more fun going through one of these than, say, a "jumbo pack" of some Topps product or another.

If anything I've posted catches your fancy -- whether it be for a player or team collection -- I'd be happy to send it your way.  Just drop me a line.  Hey, I collect Carl Everett cards, so why would I be surprised if anyone out there has a fetish for Todd Stottlemeyer inserts or Brandon Webb serial-numbered cards?

Thanks for checking in, and I'll catch up with ya soon.