A Double Shot of PWE Fireworks 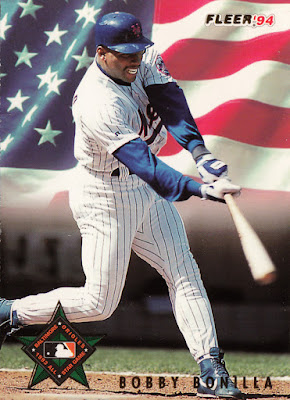 Happy Fourth of July, folks!  I hope you're all enjoying some quality down time with family and friends on our nation's birthday.

I'm using this time to catch up on some overdue trade posts.  Specifically PWEs that have been coming fast and furious from the great state of Rhode Island.  That means, of course, my good buddy Shane of Shoebox Legends.  I've gotten a pair of primo PWEs from Shane over the past couple weeks that are dying to be shared. So, let's have a go!

I'll start with the most recent edition, since it contained the above Bobby Bonilla All-Star insert card from 1994 Fleer.  It's the perfect card--perfectly patriotic, that is--to lead off this July Fourth post, no?  And, if you're on Facebook, Twitter or if you just read the baseball pages regularly, you know that July 1 marked Bobby Bo's annual payday from the Mets.  He'll be receiving checks from the Mets til doomsday, I believe. 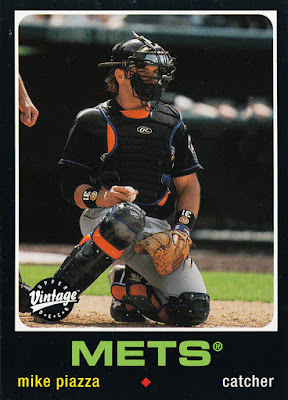 This UD Vintage base card of Mike Piazza had been on my Zistle want list for a dog's age.  With its addition, I'm only lacking one base card from the 2002 Vintage Mets team set, and that would be the team checklist card. I really dig the look of this Topps Gallery base card of David Wright from 2005.  No matter the year, Gallery cards were a neat concept and always well-executed from what I can recall.  By the way, that's Kaz Matsui looming at the shortstop position in the background. 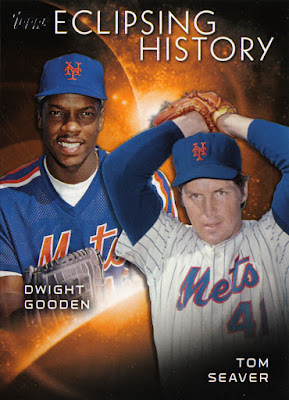 This is one of the new Series 2 inserts from Topps.  To boot, I believe this is the first card in my collection to feature both Doc and The Franchise.  The blurb on the back informs us that Gooden's 1985 WAR of 12.1 bested Seaver's franchise record of 10.6 (1973 season) and was the lowest for any hurler outside of guys name Walter Johnson and Cy Young.  Pretty cool stat! 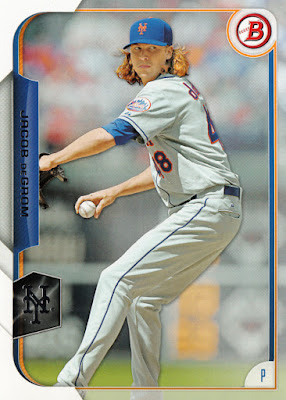 Jacob deGrom's base card from this year's Bowman set.  Of the regular non-prospect portion of '15 Bowman, only another lower-case D (Travis d'Arnaud) eludes my collection. 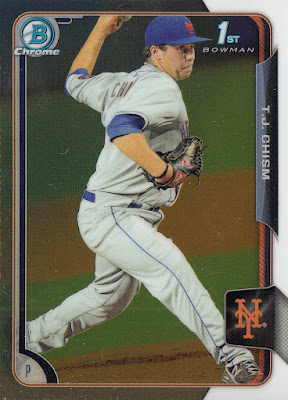 While we're on the topic of Bowman, here's a Chrome Prospect of T.J. Chism, who is no longer a Mets farmhard and is presently toiling in the independent Atlantic League.  He's apparently a longtime trading card collector who was pretty stoked to learn he finally got his own big league baseball card.  So geeked was he, he's been posting pics on his Twitter account of this card and all its parallel versions.

The most recent mailing from Shane also included a trio of Vlads... 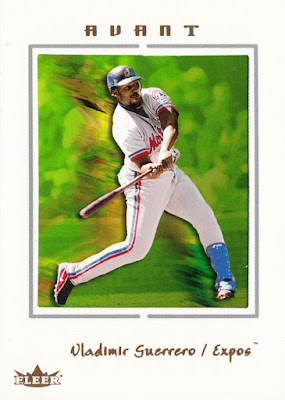 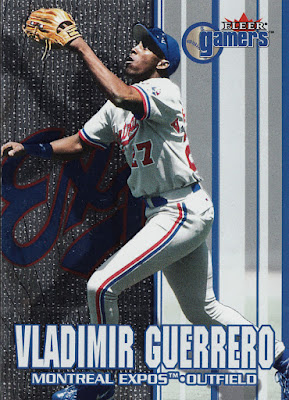 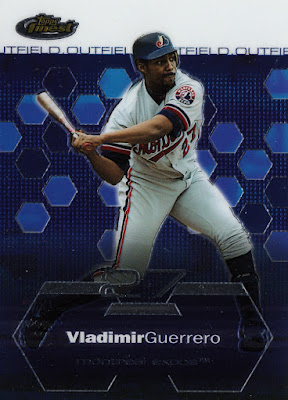 These three bring my Vlad Guerrero count to a robust 342 unique cards!

And the cherry on top is a French-language hockey card from 1991-92 Parkhurst... 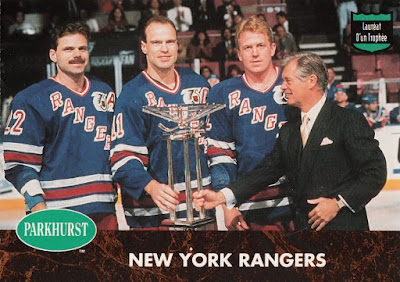 The Rangers have three times in their history won the Presidents Trophy (1991-92, 1993-94, and this past season).  Considering the Trophy has only been around since the '85-86 season and just 15 teams have ever claimed it, that's a pretty decent numbers of times.  In fact, only the Red Wings (six) have won it more!

But, hold on, there's more!

I'll start off the second of the PWEs with the guy who led off the first... 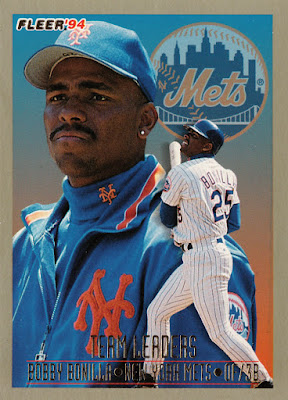 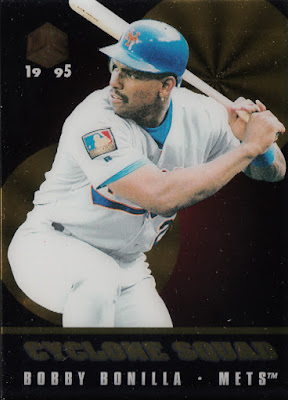 Certainly, Bonilla didn't have the most memorable stay for his hometown ball club, but, on the positive side, he was featured on some pretty great inserts during his Mets days.  This "Cyclone Squad" card from 1995 Sportflix is now among the favorite Bobby Bo cards in my collection.  Of course, you can't really gather how visually awesome it is from the scan.  Just take my word for it! 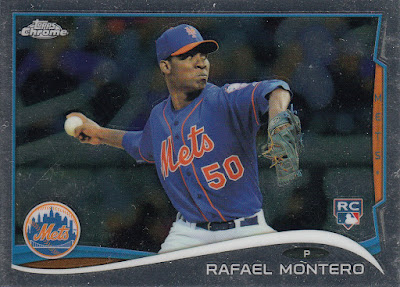 Righty Rafael Monero has been on the shelf with a shoulder injury since late April and is clearly the odd man out in a crowded crop of Mets young stud pitchers.  He and deGrom made their MLB debuts on back-to-back days last May against the Yankees.  But, while deGrom has become a nearly untradable asset, Montero's name frequently comes up in the rumor mill. 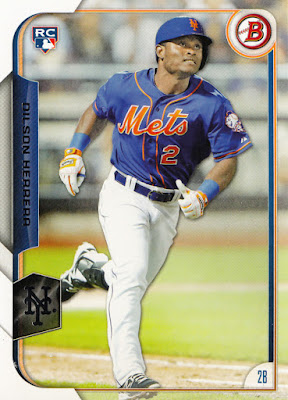 The Mets recently optioned Dilson Herrera back down to Triple-A, as Daniel Murphy returned from the DL list earlier this week.  It seemed pretty obvious that the native Columbian needed some more seasoning in the minors.  He still figures into the club's future. 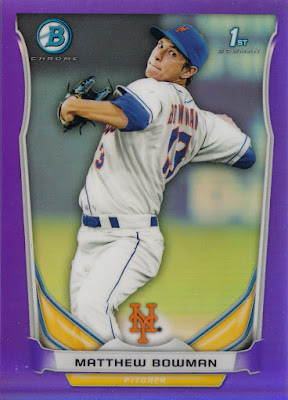 This is a purple refractor of Matthew Bowman, numbered to 199.  Bowman is currently at Triple-A Las Vegas and isn't necessarily finding PCL batters, ballparks or land elevations to his liking.  The former Princeton Tiger is 5-9 with a 5.71 ERA for the 51s so far this season.

A pair of Piazzas were definitely a highlight of this particular PWE... 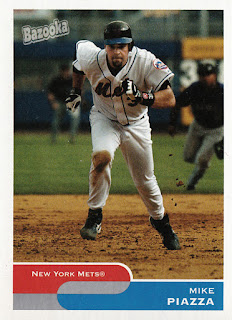 First, this Bazooka mini of Mike.  There are apparently two versions of this card (as well as the normal sized card).  One features Piazza in his catchers garb, while this one shows him on the base paths. 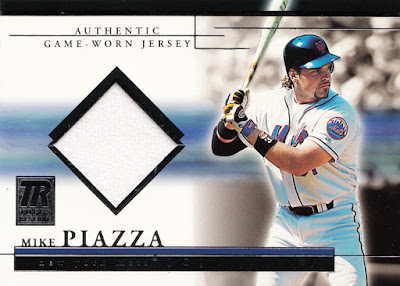 A relic card of the future HOFer is always a treat!  This is just my second jersey card of Mike's.  This one is from the former high-end brand known as Topps Reserve.  Surprisingly, this is the first Mets card I own from the Reserve brand!

And we finish the PWE with yet another Vlad for the count... 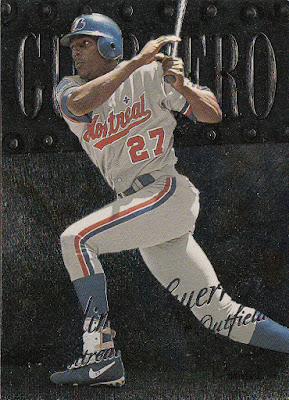 Whew!  That completes the full tour of two PWEs from my main man Shane.  I've got a new stash of Sox ready to make their crawl up to New England, buddy, so be on the look out!