It'll Be Here Before You Know It... 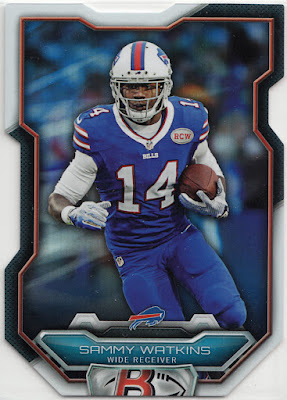 We are finally on the other side of the All-Star break.  I was starting to go through baseball withdrawal.  And because there weren't any real sports on TV on Wednesday and Thursday, I started to dream of the upcoming football season which isn't too far off.

You might be tempted to think that I--as a diehard Buffalo Bills fan for nearly 25 years--wouldn't get amped for disastrous and heart-breaking football season after season, but that couldn't be any further from the truth.  Well, O.K. I don't like the disastrous or heart-breaking aspect of it, but I'm sure as heck pumped beyond belief for each and every season.

This season is no different, of course.  And I'm even more excited than usual because Rex Ryan is the new sheriff in town.  It's nice to have a head coach who actually takes pride in his franchise.  That's not always a given in Buffalo.  Also, lots of new talent is on board, including the likes of Shady McCoy, Percy Harvin, and Charles Clay.  Couple that with a defense that was near or at the top of the league in most every category a year ago, and you've got the makings of a potential playoff season in 2015!

To help stir me further into a football frenzy was a package I recently received from Douglas of Buckstore Cards fame.  He sent me a bundle of Bills from 2015 Bowman. 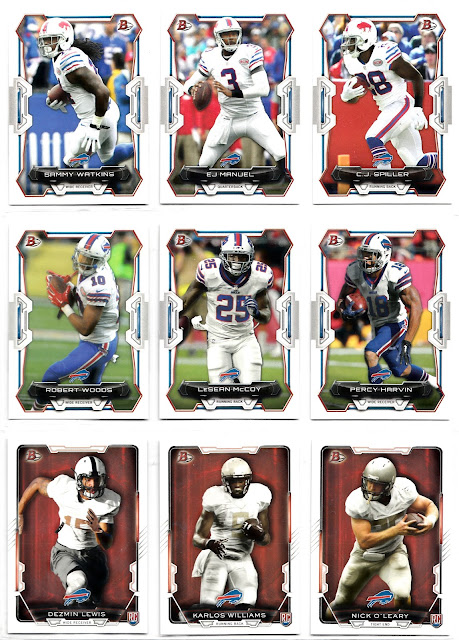 Looks like Bowman cards to me.  And, of course, Topps' football sets can't help but feature photos with oodles of photoshopped jerseys and helmets.  If you think baseball is bad, the football sets create a new gold standard. I mean, obviously McCoy and Harvin were just acquired during the off-season and, thus, have yet to suit up in a game for the Bills.  Does that stop Topps from slapping red, white and blue garb on 'em?  Nope!  Well, at least they dropped the mouse and backed away from the keyboard before doing the same to the draft picks.  Thank goodness for small miracles!

Anyhow, and regardless of the minor gripes, I'm really happy to add these to my Bills collection.  Especially the Watkins cards.  These are my first two of Sammy, actually.

My gung-ho football collecting days are way in my rear, as I can't tell you the last time I bought a football pack. But, I'm still a Bills collector and, believe it or not, I'm actually very organized with my football cards.  I have all my Bills in a neat and tidy binder.  All that's left to do is catalog them on Zistle and I'll be all set to have a go with building up my cache of Bills cards with even more gusto.

It's funny, the complete opposite is true of my Mets collection.  I have everything accounted for and cataloged on Zistle, yet there are Mets cards in about 28 different places in my 'sports room'.  One of these days I'll get my act together, I promise!

Speaking of getting one's act together... 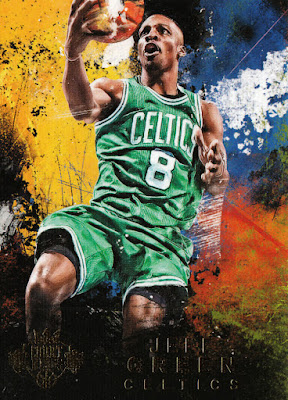 Included in Douglas' mailing was a copy of this Jeff Green card.  I'm a huge fan of the C's and I love to acquire new Celtics cards whenever I can.  However, I'm a general failure on all fronts when it comes to basketball cards. Not only are my Boston cards not neatly organized in a binder, but they aren't cataloged on Zistle. For the most part, I have no idea what I have and/or what I need, etc.

Finally, a couple of new entries into the Gabriel collection... 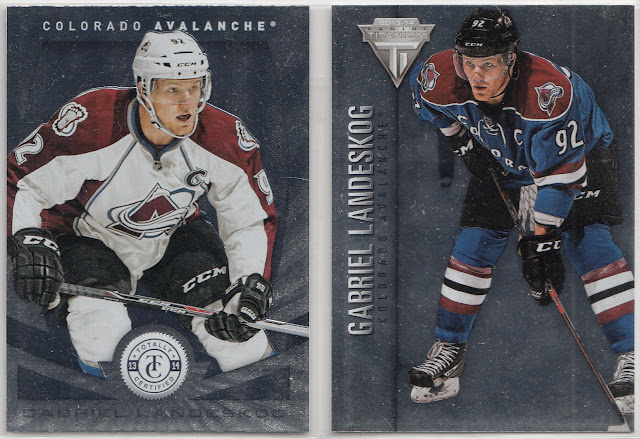 With these two new Landeskogs, I now have 10 unique cards of the guy.  In relative figures, that's the equivalent of having 300 cards of a given baseball player.  I just don't have a lot of hockey, but it's always fun to get a few new cards, whether they are Gabriels or New York Rangers.

Douglas, thank you, as always, for keeping an eye out for my collection(s)!