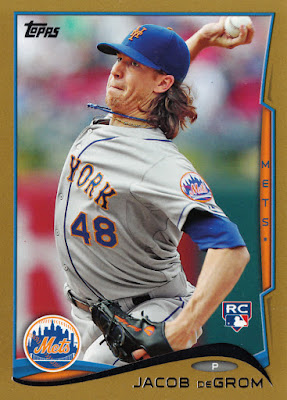 Hats off to Mets righty Jacob deGrom for his selection to the National League All-Star squad.  It's a well-deserved honor for the former college shortstop who's in the midst of first full season in majors.

Through 16 starts this season, the reigning Rookie of the Year is 8-6 with a 2.30 ERA.  He's fanned 102 batters through 105 2/3 innings and has only issued 20 walks (0.97 WHIP).  For my money, he's the ace of a very good and very deep young staff in Flushing.  And that includes Matt Harvey, who's still finding his way back from last year's Tommy John surgery.

Most likely, deGrom will be New York's only representative on the NL team.  Closer Jeurys Familia is among the five players for that fan-driven Final Vote thingie, but he's long shot given he's up against the likes of Clayton Kershaw and Troy Tulowitzki.  Familia has been awesome this year, regardless.

Anyhow, I recently picked up this deGrom gold parallel rookie off eBay for less than five bucks shipped.  I'm always on the lookout for gold rookie cards at decent prices for promising players, and this one more than fit the bill.  Of course, I'm a huge fan of Jake and I think (knocking on wood with fingers and toes crossed) he's going to be a good one for a long time with the Mets. 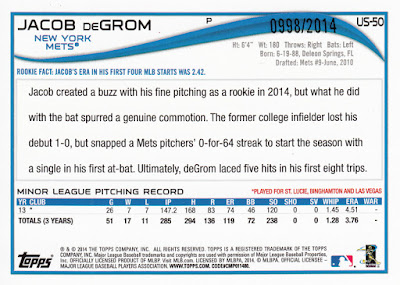