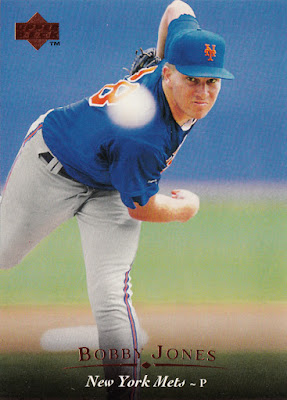 A little over a week ago, I posted about an amazin' trade package that I received from a reader named Jeff who was referred to my remote outpost by Shoebox Legends CBO (Chief Blog Officer) Shane D.  It was a huge lot of cards that touched on nearly all corners of Metsdom over the past few decades.  In other words, it was absolutely fabulous(!) and filled lots of gaps in my ever-growing collection.

Well, apparently that package of nearly 100 cards wasn't quite generous enough, because I was recently the lucky recipient of an unsolicited second shipment of Mets from Jeff!  Over 70 new Amazins added to my collection.  Not a single card was a duplicate from what I already had in my inventory, since Jeff went the extra mile and cross-referenced my Mets collection on Zistle.  I mean, is this guy a gem or what?!

I had such a blast going through these cards!  So many different brands and years--many of which are hard to come about anymore--and lots of great memories of the players included.  I'll share a bunch of them in this post and save some others for a separate post since I want to show a lot of 'em but don't want to make this thing too long.

At the top of the post you'll see a '95 Upper Deck base card of Bobby Jones.  I love the photo choice on this card.  Also, I have really developed a much greater appreciation for and devotion to Bobby's cards since I got into the 'team collector' thing.

Jones pitched eight years for the Mets, beginning in '93 when the club was down in the dumps.  But he was around just long enough to be a part of the special (aka playoff) teams in '99 and '00. He even authored one of the best moments in Mets history when he spun a series-clinching one-hit shutout in Game 4 of the '00 NLDS versus San Fran. 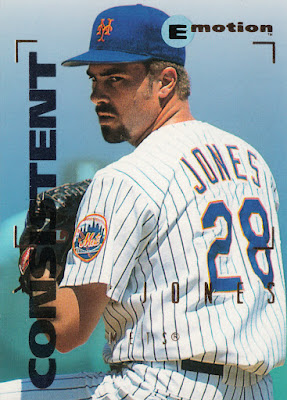 Another base card of Bobby, this one from 1995 Skybox Emotion.  This is just my third Mets card from that set. I'm sure it has its detractors, but I actually like this set a lot!  The photography is very solid and I think it's pretty neat how each player gets his own adjective.  In this case, "Consistent."

While Bobby Jones spent a lot of his career in Flushing, he's got nothing on this guy: 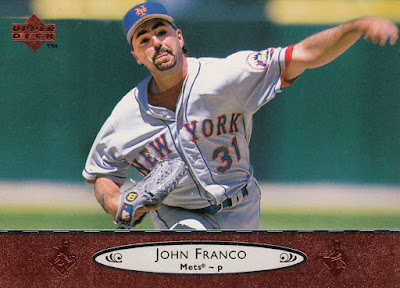 John Franco wasn't a Mets lifer; it only seems that way.  Franco pitched 21 seasons in the majors, 14 of which were in a blue and orange uniform.  The Brooklyn native logged two playoff wins out of the 'pen for the Mets, and both were memorable to say the least.  The first was New York's Game 4 clincher against Arizona in the '99 NLDS--better remembered for the Todd Pratt walk-off (more on that later).  The other was Game 3 of the 2000 Subway Series at Shea Stadium.  It was the lone game of the hotly-contested series that the Mets captured.

And speaking of that World Series... 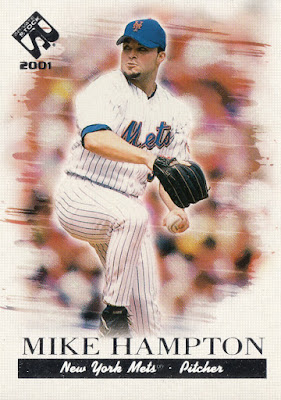 Mike Hampton was definitely instrumental in landing the Mets in the '00 Series.  He was utterly dominant in that year's NLCS against St. Louis.  The southpaw won both his starts (including the series clincher), limiting the Cards to just nine hits and four walks over 16 innings with zero runs allowed.  He was easily the MVP of the championship series. 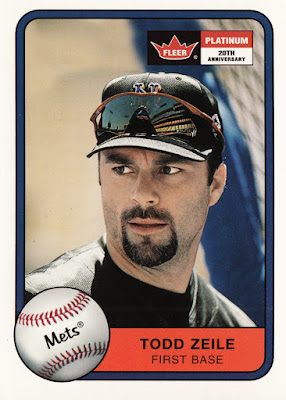 Man, I really love this card.  The throwback Fleer design (mimicking the '81 debut set) still looks good to this day--probably the sharpest-looking set Fleer ever produced, in my opinion.  Couple this classic design with players from the '00 NL champion team, and you've got a real winner.  I absolutely need to get my hands on more Mets cards from this set!

Zeile, by the way, scored the eventual winning run in Game 3 of the Subway Series when he raced home all the way from first base on Benny Agbayani's eighth-inning double.  If you remember, Zeile was probably one of the slowest runners in sports, so it was a pretty extraordinary moment for him to score from first! 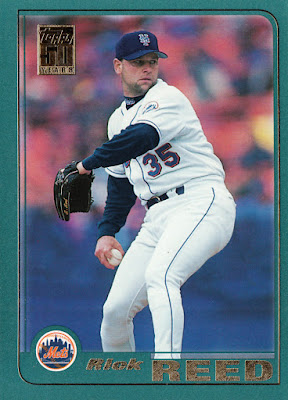 Rick Reed started Game 3 of the '00 Series and settled for a no-decision.  The workman-like righty scattered six hits and two runs while fanning eight men over six innings.  Reed, a former 'scab' player was always one of my favorite Mets.  He was the antithesis of flashy, but he always seemed to get the job done in big spots. 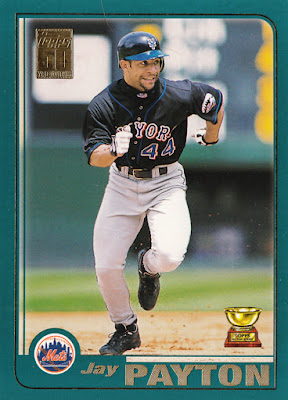 I think 2001 Topps is a set that took some time to really accept, mostly for the color of the front borders.  But, looking at the cards nowadays, I really love 'em!  This was smack dab in the middle of the era when Topps strayed from white borders.  There were silvers and golds and blues and whatever this is.  Sea-foam green maybe?  Search me. 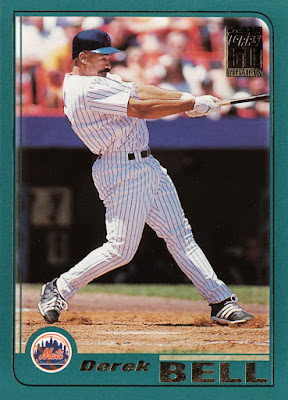 Ah, Derek Bell.  The man who lived on his yacht in Flushing Bay when he played for the Mets in 2000.  Always a fun and colorful guy, Bell had a solid season for the Amazins, but unfortunately became a footnote when he was Wally Pipped by Timo Perez at the outset of the playoffs. 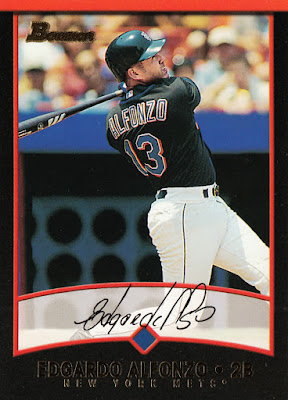 I think I've been to exactly two games at Citi Field.  Living in Delaware as I do, it's pretty tough to make it up to Queens for baseball these days.  I mean, you might as well be talking about going to Venus.  Hell, when I lived in Central NJ as a kid it was a decent a hike to ol' Shea for a ballgame.  Anyhow, one of the two games I've been to at Citi was an absolute must: back in the 2012 season for Edgardo Alfonzo bobblehead day. 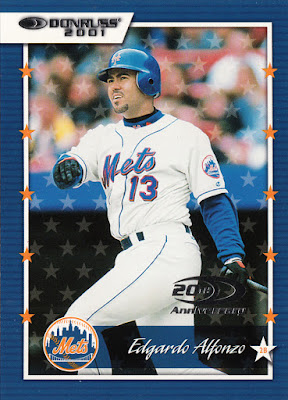 The Mets, as an organization, too infrequently produce any position players worth a darn, so I'll always hold Fonzie near and dear.  His career might not have produced the prolonged greatness for which we all hoped, but his productive years were pretty amazing.  I'll always recall his epic performance in Houston in late August of '99 when went 6-for-6 with three homers, five RBIs and six runs scored.  The next day I left for my freshman year of college, so I'll always associate the two.  I did pretty good in college, by the way, but not 6-for-6 good.

So, I didn't plan on this post being centered on the '99 and '00 Mets; it just sort of unfolded that way. Honest!

In any event, let's take a slight detour back a little further in Mets history with these next two cards... 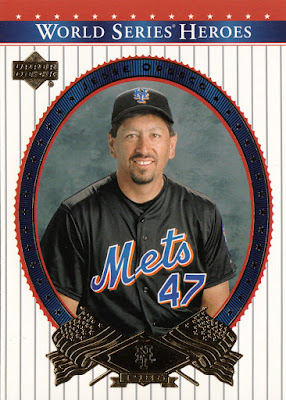 Man, this is a strange card!  Sure, Jesse Orosco was certainly one of the many heroes of the '86 Mets.  But, why in tarnation is ol' Jesse shown in latter-day form wearing a black jersey and cap combo which he never donned during his Mets playing days?  Furthermore, at the time this card was produced (2002), Orosco was still an active player pitching for the Dodgers.  My only guess is this was from a photo shoot from when the Mets held some sort of 40th anniversary celebration.  Still...strange! 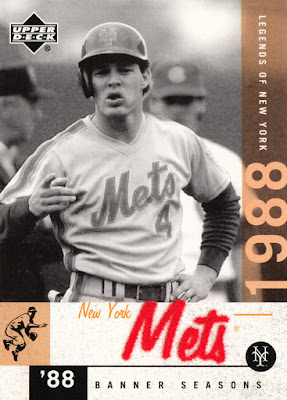 When I think of Lenny Dykstra--and I do think of him--I tend to remember the guy pictured on this card.  Hands on hips, batting helmet on head, eyes kinda squinty, and cheek full of tobacco product.  The 1988 season, by the way, should have been a real banner season for the Mets.  How that era's Mets team produced just one World Series is equal parts baffling, maddening and disappointing. 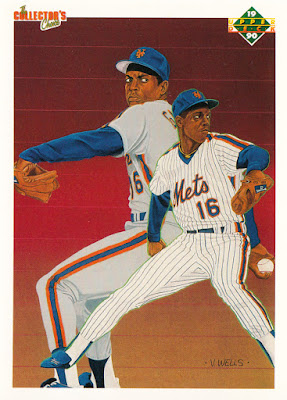 I think Upper Deck revolutionized the checklist card, right?  At the time of UD's arrival on the card scene, checklists for the most part did not feature any sort of photos or artwork.  And if they did they certainly weren't on par with something like this.  This card makes me think of the huge billboard of Gooden that used to adorn the side of Manhattan high-rise in the '80s, when Doc was on top of the world.

And we'll round out this edition of the "Jeff sent me another huge batch of awesome Mets cards" post with a pair of outstanding 1993 Stadium Club samples: 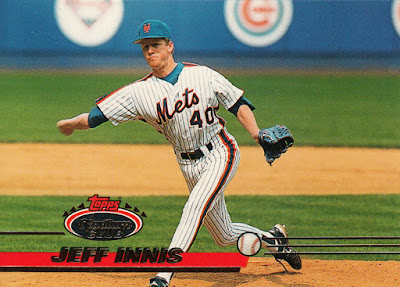 To truly capture the quirky side-arm delivery of Innis, the horizontal format is the way to go! 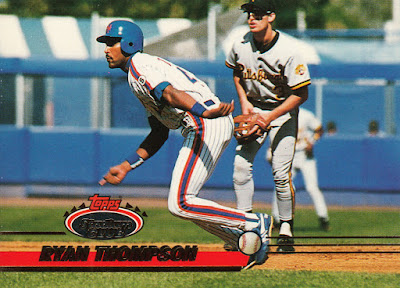 Lots to admire about this card.  Chiefly the cameo appearance of then-Pirates shortstop Jay Bell, but also the tops of the picnic tents just beyond the left-field bullpen.  Yes, I know it wasn't an architectural or aesthetic marvel, but I miss my Shea!