And now here are some Mets cards that came in the box o' 400 cards I recently got from my local card shop.

Believe it or not, I collect Carl Everett cards.  During his brief time as a member of the Mets, I guess he had a profound impact on me.  I recall a game from the early part of the '97 season in which he homered from both sides of the plate.  After a quick Google search, I see that he turned that trick four times in his career.

Before R.A. Dickey reached the 20-win plateau for the Mets last season, Frank Viola was the last N.Y. hurler to accomplish that feat.  Frank, a native New Yorker, went 20-12 in 1990, his first full season as a Metropolitan. And, hey, check out the back of this card: 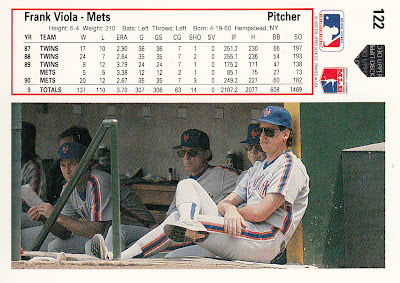 This kind of stuff made Upper Deck a pretty awesome card company.  As much as I love Topps, I sure wish UD was still in the game.

From one St. John's alumnus to another.  Ah, and 1998 Topps.  This is such a cool-looking set.  Unfortunately, it came out during my senior year of high school -- a time when buying baseball cards was far from my radar.  This one kicked off the first of six straight years in which the Topps flagship cards didn't feature white borders.  And I kinda like that.  Maybe not for six years in a row, but it's nice to mix it up every so often.  You listening, Topps??

I thought for sure I already had this Hundley, but I didn't.  So, hooray for me! This was certainly early in Todd's career, as he was still wearing the number 49 instead of his customary 9.  I know a lot of Mets fans don't care for Hundley anymore, but I still wear his jersey with pride whenever I get the chance.  For a few important years of my high school life, he was the only guy I could lean on when trading barbs with my Yankee fan friends.

I also relished the opportunity back in the late '90s to remind Yankee fans that Derek Jeter didn't deserve to hold Rey Ordonez's glove.  Naturally, Jeter was/is 100x the complete player that Rey was, but you couldn't argue the defense.  That went to Ordonez.  I loved this period of Bowman and Bowman Chrome, by the way.  Back when I didn't look at Bowman mostly as a throwaway effort.

See what I mean?  Even a bust-o prospect like Alex Escobar looks downright spiffy on this sharp Bowman design from 1999.  I can only imagine what card hawkers were asking for an Escobar rookie back in '99.  Most "experts" of this period had Alex tabbed as the next Darryl Strawberry in Queens.  We Mets fans are still waiting.

Oh look, another Mets can't-miss prospect that detonated before launch.  Hey, I never promised that any of these cards were of the superstar ilk.  I can't help it if I have a soft spot for the awful Mets teams of the '90s. It's what I grew up with!

On the topic of soft spots, here's a fella who has plenty.  Perfect last name for a guy blessed with Butch's rotund frame.  The last Met to ever wear the number 42 [Ed. Note: The last Met not named Mo Vaughn, that is.  Whoops!  Thanks to reader Steve for the correction...], Huskey will always be one of my favorites.  Obviously he has one of the base ballplayer names ever, but he also socked some moonshot-style home runs.  He only hit 86 long balls for his career, but 24 of them came as a Met in 1997.

And there you have it.  A small sampling of the Mets cards I got.  I hope I didn't depress anybody to the point of eating a whole cheesecake.  But, as I've said on numerous occasions, I'm a pretty simple person and easy to please when it comes to things like baseball cards.

I'll share a few final odds and ends from the box in my next post.  And I'll do my best not to highlight such a dastardly (but oh so lovable) group of players.