The Art of Thievery 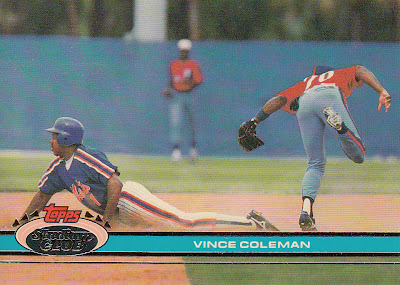 Earlier today, while I was waiting for the first NFL playoff game to come on, I was putting the final touches on what had become a two-week project of getting my player collections squared away.  I had way too many cards that were sitting in neat little stacks that were scattered around my sports room.  All the great cardboard masterpieces that I either acquired via blogger trades or from card shows needed to be filed away.  I had neglected the task for too long and decided to make a neater and more organized collection one of my New Year's resolutions.

While I was having a go with this project, I had the MLB Network on in the background.  They were airing the 1965 edition of the "Baseball Seasons" series.  What a great show, and what a great season 1965 turned out to be!  In the show, it  was mentioned that '65 was the sixth-straight -- and final -- season that Maury Wills led the league in steals, with 94.

Now, Wills was the first player in the modern era to break the 100 steal barrier, with 104 in 1962.  But I was left wondering, Who was the last player to reach the century mark?

But who was the last major leaguer?

Originally, I assumed it was the King of Stolen Bases, Ricky Henderson.  But, the last guy to do it in the big leagues was the aforementioned Coleman.  In 1987, Vince had 107 thefts to lead baseball.  His totals of 110 and 107 in the prior two seasons were also tops in the game.  He was the first National Leaguer since Lou Brock in 1974 to reach triple digits. 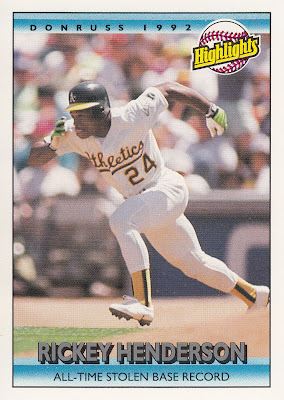 Henderson had three seasons of 100+ steals, including a baseball-record 130 during the 1982 season.  He had 108 in 1983, which stands as the last time a player from the Junior Circuit performed the feat.  And he's still the only AL player to have ever reached the 100 steal plateau.  At least in recorded history.

Anyways, just a little piece of baseball trivia that I figured I'd pass along.

And, ya know, even with all this great football ongoing, I do miss the great game of baseball...