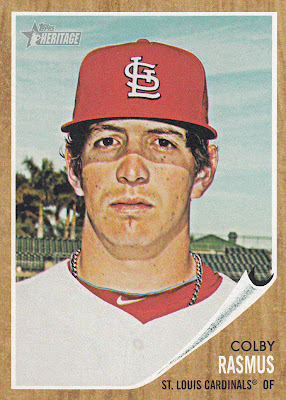 My freshman year of college was a roller coaster of emotions.  Specifically the first month or so.  And that was without the sports landscape being factored in.  But, since this is a website devoted to sports cards, I'll try to stay on the rails.

My favorite sports teams were all over the map, figuratively and literally speaking.  The Buffalo Bills were about to embark on the first year of the post-Marv Levy era and, thanks to some Flutie Magic, would become one of the NFL's surprise teams.  The Boston Celtics were mired in the Rick Pitino era, though they just lucked into a future NBA Finals MVP in that June's draft.  The New York Rangers were not so much a hockey team but a vehicle for Wayne Gretzky's farewell tour.

And then there were the Mets.  In my late teen years, I could probably count on one hand the number of things that mattered more to me than the New York Mets.  Their triumphs as well as their failures were my lifeblood. To say I lived and died with them was an understatement.

Thus, going to college in South Jersey (read: not the New York television market) was something of a Mets fan's internment.  It was difficult for me to follow the team on a daily basis in September of 1998, much less catch a game on TV.  I didn't have a computer at the time and had to depend on campus computer labs or ESPN to get my fix of updates.  I mean, for the first time in my life, I was separated from my Mets, both in print and in living color.  Talk about culture shock.

Compounding the problem was the Mets' slow and painful slide from the top of the division to the top of the wild card to out of the playoffs, all over the course of the season's final weeks.  My roommate was a Yankees fan, and he took great pleasure in making sure I got word of a Mets loss.

But, looking back at the wide view, the saving grace of that September was the sheer excitement that the McGwire/Sosa home run chase provided us with.  And it was exciting.  Due in large part to all the steroid stuff that bubbled to surface years later, that whole summer of baseball and its climax seems like a dream. Regardless of what sort of picture history or Congress of the BBWAA insist on painting, I'll always hold that September close.  Because it was magical, steroids or no steroids.

Don't get me wrong, I'm certainly pissed at both McGwire and Sammy for being so reckless and dishonest, but they weren't alone by a long shot.  Therefore I don't feel it proper to single them out and pretend like that summer didn't happen.  Because it did happen and it lifted my spirits and made me fall in love with the game on an even deeper level than previously.  And I'm confident I'm not alone in that regard.

Wow, okay, so I seem to have veered far away from the Colby Rasmus card at the top of this post, no?  I mean, what does Colby have to do with any of this?  Well, the simple answer is Nothing, really.  But, it's a Cardinals card that I got from a great Cardinals blogger, Kerry at Cards on Cards.  This Rasmus card is one of two Heritage '11s I received from Kerry, aiding my set quest.

I received a huge mailer from Kerry just the other day, loaded with tons of Boston Celtics cards (more on that in a bit) and a few other assorted baseball cards such as the Rasmus.

But the most intriguing part of the package, and the thing that got me onto my September 1998 tangent, was a sizable run of Sammy Sosa cards from 1998 Pacific.  Each of the 33 cards bore the title of "Home Run History" and featured a different stage of Sosa's extraordinary season, including some of his milestone homers.  I figured these cards were either part of a specialty set that Pacific released late that year, or were inserts from the regular Pacific Baseball product.

As I discovered, the latter scenario was the truth.  But, I found it curious that each card had a card number that was even, beginning with the number 2 and going all the way through 66.  Why is that?, I wondered.  So, because I'm too dense to figure these things out for myself, I whisked over to The Trading Card Database to look up the checklist.  And as most lucid folks might have already deduced, the odd numbered cards were devoted to the Summer of '98s other Home Run Hero, Mr. McGwire.

Here the cards, by the way: 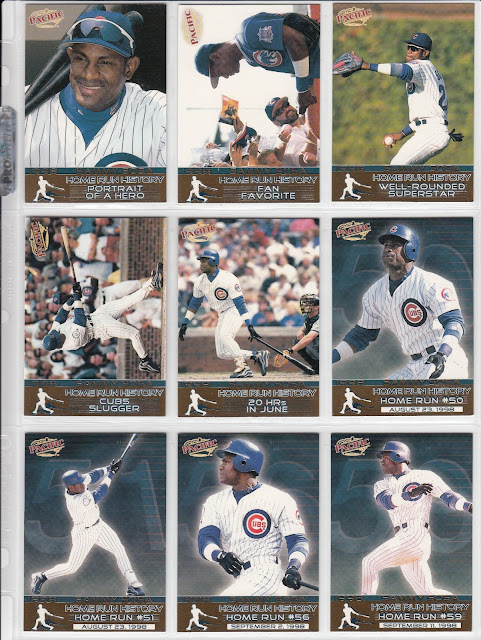 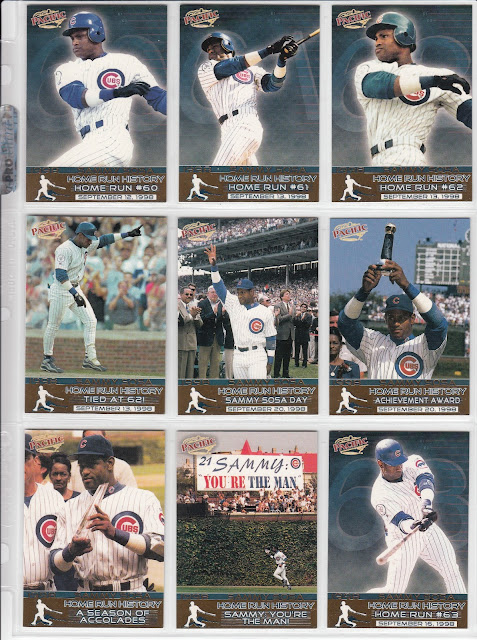 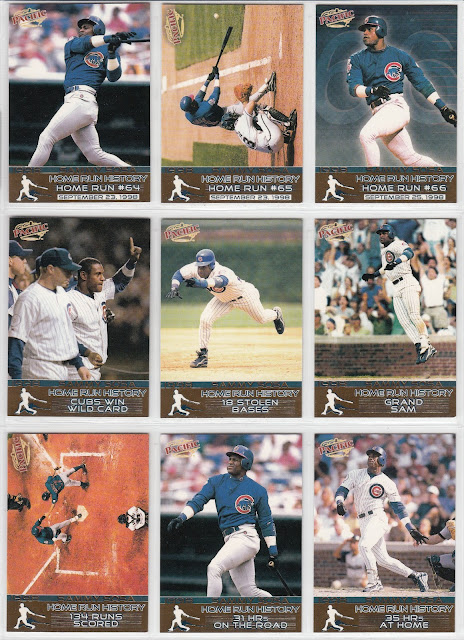 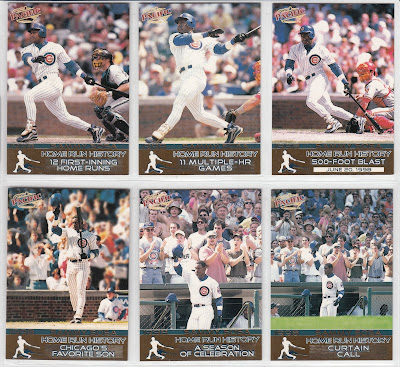 Anyhow, I think it's pretty freakin' neat that I am now the owner of all the solo Sammy Sosa cards from that insert set.  I'm absolutely appreciative for these, Kerry.  I hope you're as proud of the Cardinals/McGwire portion of this set as I am with these Sosa cards.  I'm no Cubs fan, but Sammy became one of my favorites that summer, both for his baseball prowess as well as his enormous personality and charm.

Here are a couple other fun cards from Kerry: 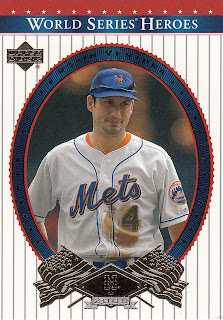 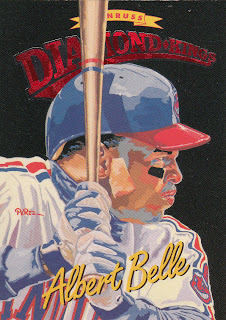 I certainly applaud Upper Deck for trying to paint a less vulgar picture of the 2000 World Series, but there we no Mets heroes -- certainly not Robin Ventura -- in that series.  Yes, he had a home run in Game 3, but Robin was 2-for-19 otherwise in five games.  At the most critical time, the Mets offense was as potent as wet cardboard. Robin was pretty emblematic of that.

On a cheerier note, Albert Belle is looking as bad-ass as ever in that sweet Diamond Kings card from 1994. At the time this card was produced, Belle still held seven career offensive records at LSU.

Oh, before we part company, I have to talk about the Celtics cards.  So, Kerry also contributes to the blog A Pack A Day.  And that's where I encountered his post about a pack of Stadium Club Basketball from the mid-90s.  He made mention of a need to liquidate lots of his basketball cards, and I chimed in on my Celtics fandom. The rest, as they say, is history.  In exchange for some Trailblazers cards along with a group of 2012 Heritage towards his set, I was to receive a good number of Celtics cards.

And a whopping number I did receive. 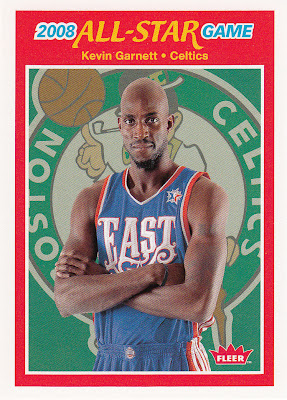 I'll just share this one (and this is a good one!), since there are, like, a bazillion others.  But, for anyone who is interested, I'll be parading them all around on my sister blog, Charting the C's.  It's just a silly little side project for me.  Nothing more than an excuse for me to scan Boston Celtics cards.

What more can I say?  Thanks for an amazing package, Kerry!  You've added a lot of tremendous items to my collection.

But, more than that, you've rekindled some good memories from one of baseball's greatest seasons.