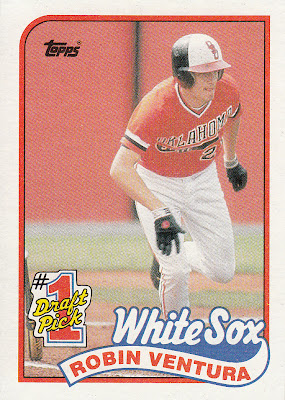 I haven't done a "Clubhouse Favorites" in quite some time.  Not since September 13, to be precise.

But, a recent package I received from my ol' pal Marcus at All the Way to the Backstop (who, by the way, really snazzed up his blog's header in case you missed it.  Way cool, Marcus!) inspired me to pick up the baton once again.

And it was the very card above that done did it.

I have several copies of this Ventura card already, but that doesn't mean I don't love getting another.  I think a lot of 1989 Topps base cards would make it into my "favorites" category.  After all, it is my favorite set of all time.

But this one is on a level all it's own.  Something about those great OSU uniforms coupled with the orange background.  Not to mention the fact that Robin is  pictured in an off-centered fashion to make room (I suppose) for the neat-o #1 Draft Pick insignia.

Now, normally, I don't dig the "rookie" cards that picture the players in their college unis.  Well, except for the Jim Abbott and the Chipper Jones and the Frank Thomas and the...  Hmm, okay, I guess I do like the college cards after all.  Forget I said that.

Anyhow, Topps did this a lot in the late '80s and early '90s.  And, as you may or may not know, Robin Ventura is kind of a hallowed college player (See: 56-game hitting streak).  So that makes this one all the more appropriate.

I'm really glad that Marcus sent me this card; I had almost forgotten how awesome it is!

I'm also really glad he sent me all the other great cards that he did.  Ever the generous blogger, Marcus included oodles of Mets cards and assorted other goodies..

I've mentioned a few times that I'm really into 2009 OPC.  By reading many of the other quality baseball card blogs out there, I know I'm not alone.  So, I was only too pleased to find a bunch of Mets cards from that set.

That Ryan Church cards is already one of my favorite Mets cards in recent memory thanks to the great photo. And you can see how hard Mike Pelfrey is straining to keep that oversized mouth piece pinned behind his lips.  In case you forgot -- or didn't know -- Pelfrey had a bad habit of biting his tongue upon his follow through.  It seems he had the Michael Jordan tongue disorder.  Except I don't recall Mike ever chomping down on his.

A couple more Metsies here, including a nice black parallel of Bobby Parnell.  And I had to include a scan of the Vlad Guerrero All-Star Game card.  If only more players ditched the batting gloves...

Sticking with the Mets theme, we have a cool Al Leiter card here.  Numbered to /6,000. 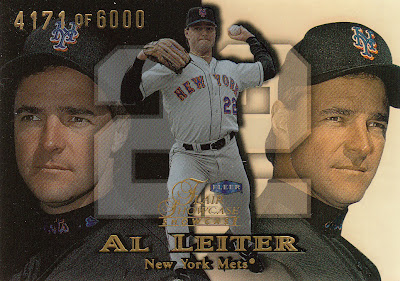 Leiter has a notoriously vivid personality and is a lot of fun to listen to.  At least I think so.  That's why I get a kick out of the two "serious" faces he's sporting on this card.  Nice try, Al.

And this green parallel of prospect Domingo Tapia is from this year's Bowman Chrome.  That's a product I don't have much of, so I was pretty happy to receive this. 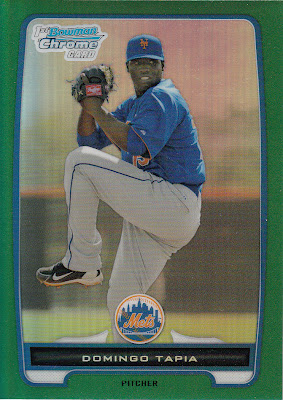 And I'd have to say the cherry on top was another Bowman Chrome card that Marcus included.  It's not a Met, but it's definitely a great card to have... 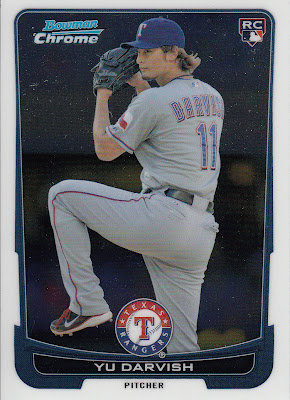 Bowman's designs have been pretty bland recently.  Actually, they've always been bland, who am I kidding? But the 2012 effort was one of their best, I think.  It still didn't motivate me to collect the set, but when I get a card like this it reminds me.

Much appreciated for all the great cardboard, Marcus!