Jesus to Gibson: What's the Connection? 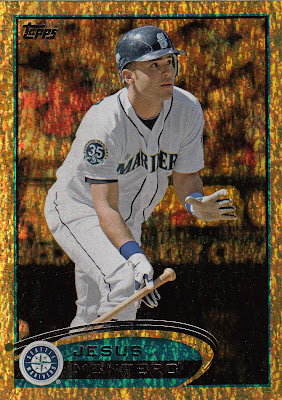 Every baseball card is like a little piece of baseball history.  Sure, the pictures on the front are what the majority of us collectors are primarily drawn to.  But, what's on the back can make even a bland card memorable.

In addition to stats and percentages, lots of cards feature a little career factoids or personal tidbits on their flip sides.  My favorite among those are the ones that link the featured player to another player -- whether that other player be a Hall of Famer or a flash in the pan; a former teammate or a long-passed legend.

Now, I'll admit, I'm absolutely guilty of often neglecting to take in the minutia on card backs.  Half the time the only time I flip the card around is to glean the card  number for set-building purposes.

However, I was recently looking at the above 2012 Topps Update parallel of Jesus Montero and decided to give a closer look to the back.  Montero is a guy that I think I'm going to start collecting in greater volume.  Not sure why, exactly, except to say that I really like all the cards of his that I've come across.

Anyways, check out the knowledge contained in the lil' paragraph underneath the batting record columns. 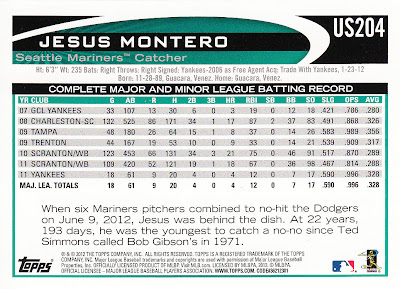 Now, this is a pretty neat connection between Jesus Montero and fellow catcher Ted Simmons.  And it's something I would have never known or perhaps cared about except for card No. US204 from this year's Update set.

So, naturally, that sent me clamoring to dig up one of my few Ted Simmons cards.  I don't have a lot of '75 Topps, but I have Simmons. 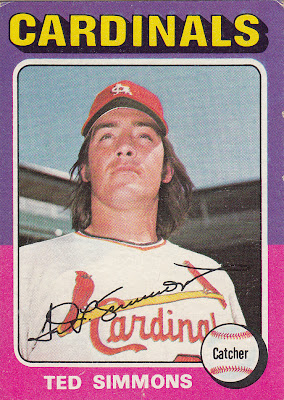 The flowing brown locks, the smugly stoic face, and the bent-brim of the ball cap calls to mind Kelly Leak of Bad News Bears fame.  At least it does for me.  And who am I, really?

But back to Montero.  The really great thing about the info nugget on the back of Montero's card is that it not only links him to Simmons, but also to the immortal Hall of Famer Bob Gibson. 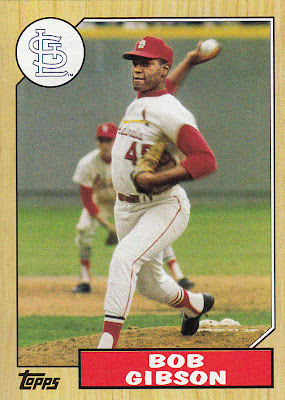 Who woulda thunk that you would be able to link the likes of Jesus Montero to the ferocious Gibson in just two rungs of the Kevin Bacon ladder?  It's pretty wild, if you ask me.

And I'm sure all sorts of secret little backdoor links such as this exist on the backs of baseball cards.  Just waiting for you, me and collectors all over the map to discover them.  Somewhere out there, I'm sure there's a solution to the ancient mystery, "Hey man, can you connect Timo Perez to Ernie Lombardi in just three degrees?" 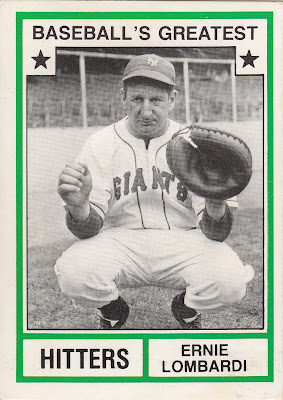 So, I've learned my lesson.  I'm definitely going to be more attentive to the written (or typed) word on the backs of my baseball cards.

If you're too quick to dimiss 'em, who know what sort of baseball history you're gonna miss out on!