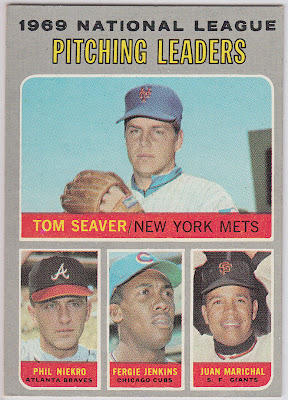 Other than a stray eBay purchase last week, I've not treated myself to any cards in roughly a month.  Each time I stroll past the card aisle in Target, Wal-Mart or K-Mart, I talk myself out of squandering my dough on a rack pack of this or a hanger box of that.  Perhaps my subconscious is preparing myself for life with a baby.  [Ed. Note: Yes, Mrs. K is due in late December with our first little one!]

Whatever, the reason, I've fallen behind in my pursuits of Series 2 Topps plus Heritage and Archives.  I'm to the point with each product that any new pack or box purchased is sure to net me mostly doubles.  And I know they're good for trading and such, but I just don't feel like throwing down 10 or 20 bucks on a hefty lot of dupes.

And that's the beauty of card shows.  You can attack set needs efficiently without taking on all the unwanted clutter and excess.  Thus I trekked to the fire hall in my town on Sunday for the monthly card show, fully intending to pursue the three aforementioned sets.

Well, you know what they say about the best laid plans?  Oh, I went to the show, but my stated mission was a bust.  None of the discount dealers had much of anything in the way of these sets.  Actually, let me be more accurate; I could have paid a quarter or more per card, but I'm much too cheap for that.  If I can't get a Topps common for a dime or less, I'm really not interested.  Unless it's the final card I need for a set, then I might splurge.

Rather than sulking, I made the most of my visit and picked up some other fun items.  I was happy to add on six vintage Mets cards to my collection, including the above '70 Topps "Pitching Leaders" card.  Tom Terrific led the league with 25 victories in 1969, en route to the first of three Cy Young awards he'd capture as a Met.  This, and each of the following, set me back a dollar.  To me, a much better deal than a 2013 Series 2 Colin McHugh card for 25-cents. 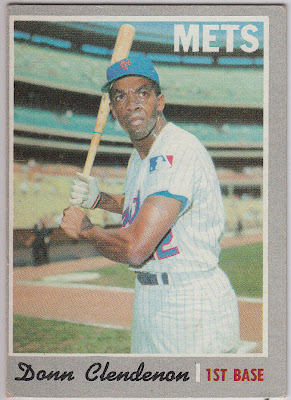 Miscut, yes, but a smooth-looking card of the '69 Series MVP.  And also my first card of Clendenon, thus allowing me to cross off this Mets hero from my All-Time Mets checklist. 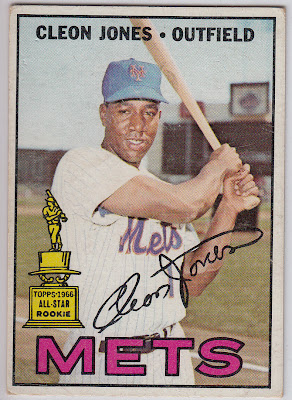 Very excited to find this card of Cleon.  I've decided to make it a mini-goal of mine to collect all of Cleon's vintage Topps cards, this being my fourth.  And I believe this is his first stand-alone card.  Fun fact from the back: "Cleon hails from the same Mobile suburb which produced Hank Aaron, Billy Williams and Willie McCovey."  Wow, what a neighborhood! 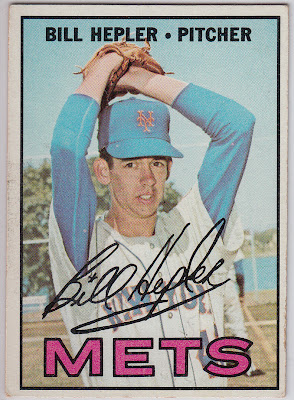 Another from the '67 set.  Strictly according to physical features, Bill Hepler appears to have more in common with Orville Redenbacher or Frank Perdue than, say, Tom Seaver or Steve Carlton.  Well, Hepler did play in the big leagues, which is more than Orville or Frank can boast.  However, his career consisted of just 37 games, all within the 1966 campaign.  But, who's counting?  As long as he suited up for one game as a Met, and Topps or any other company put his likeness on a card, that player's card will be sought after by yours truly.  Another crossed off the ATMP list. 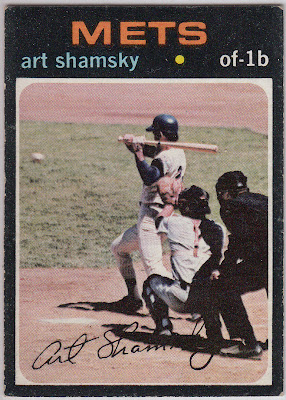 Shamsky, a member of the Miracle Mets and a player who was also lacking from my collection, has one of the best cards from '71 Topps.  At least from those I've seen, and there are plenty of good ones.  I've been hunting for this card and it's unique photo for quite some time.  Happy to own it, finally. 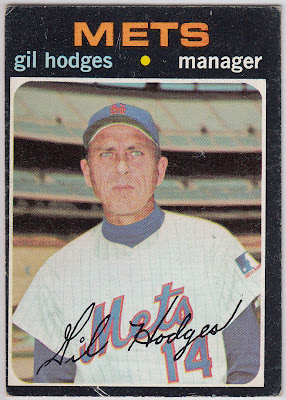 I badly wanted an archival Hodges card for my Project, and this is the cheapest one I've come across that's not torn and chewed-up to Kingdom Come.  It's obviously miscut and ever-so-slightly diamond cut, but it doesn't detract from an otherwise great card.  The famously stoic Hodges, a should-be Hall of Famer, will always be one of the true giants of Mets lore.