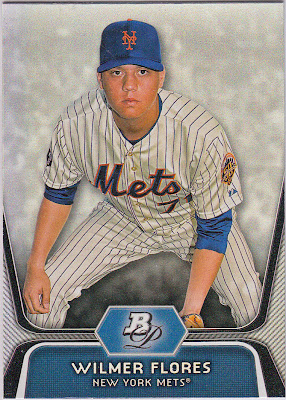 Mets fans have been clamoring for GM Sandy Alderson to promote Wilmer Flores to the big club for weeks. Well, today those wishes were granted.  And perhaps "wishes" is the right term, as Tuesday also happens to be Flores' 22nd birthday.  How about that for a birthday gift?!

Flores, the No. 5 prospect in the Mets system according to Baseball America, will make his big league debut for New York in its Citi Field tilt with the Rockies.  Weather permitting, Flores will play third base and bat sixth in the Mets lineup.

In 107 games at Triple-A Las Vegas, Flores was batting.321 with 36 doubles, 15 homers and a league-leading 86 RBIs.  Not bad for a guy playing primarily second base.

Equally exciting (for me, anyways), this also means the above 2012 Bowman Platinum card of Wilmer will now be inducted into the All-Time Mets Project mix.  It's a real beauty of a card.  The handsome pinstriped uni, the 50th anniversary patch on the left sleeve, and a high school yearbook-esque backdrop all contribute to making this card a winner.

Now, the one downer of Wilmer's arrival is that it was necessitated by David Wright's unfortunate trip to the DL with a tweaked hamstring. 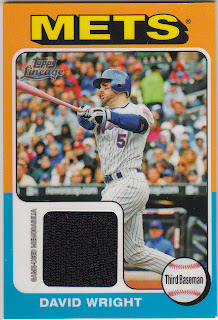 Wright tried to play through it, but he really aggravated the hammy last Friday trying to leg out an infield hit.  In yet another losing season in Flushing, at least we had David.  And, now, we don't even have that for at least a couple weeks.

Oh well, Captain America's spirit will endure despite the DL trip thanks to great cards like this 2011 Topps Lineage mini.  But, not just any mini -- a relic mini!  Mrs. K recently ordered a couple of Chris Cooley jersey cards from COMC.com [Ed. Note: Man, she's getting as bad as me!] and picked up this mini Wright as a surprise for her dashing hubby.  Very nice!!