All That Sparkles Ain't Silver 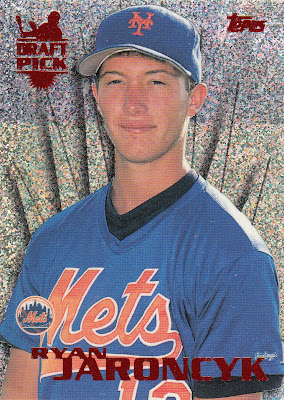 Sometimes -- okay, lotsa times -- baseball cards can unknowingly lead us to a story that goes beyond the cardboard.  Such was the case with this Ryan Jaroncyk card that was part of a neat trade package that I recently received from Nick at Dime Boxes HQ.

A Mets cap and a Mets warm-up jersey?  Gotta be a prime candidate for the All-Time Mets Project, right? Well, after a little sleuthing, I came across an old New York Slimes article about Jaroncyk, who was another in a tired line of failed Mets first-round draft picks.

But, rather than physical issues or just plain bad scouting, Jaroncyk derailed from the track towards the big leagues because, well, he just didn't like baseball anymore.  In fact, he probably never liked it.  Seems he thought it was "boring."  Pretty interesting piece, check it out here.

So it is, Jaroncyk never set foot on a big league diamond and, thus, never swung a bat or fielded a groundball for the Mets.  Sadly, this 1996 Topps Power Booster parallel - which would have been a non-brainer addition to the Project -- becomes just a really cool footnote in my Mets collection.  I can live with that, I suppose.  It's still a pretty great-looking card.

Not to worry, though, because Nick's package had lots of other prime pieces for my collection.  Including a couple of legit additions to the ATMP. 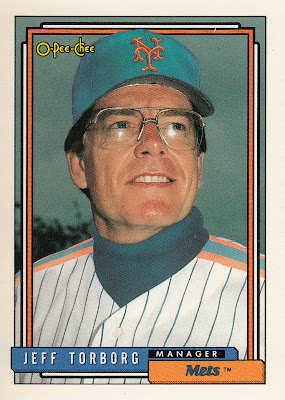 It's tough to get too psyched up for a manager card.  But, if nothing else, Torborg is an important piece to the puzzle because he presided over the fabled "worst teams that money could buy", the 1992 Mets. 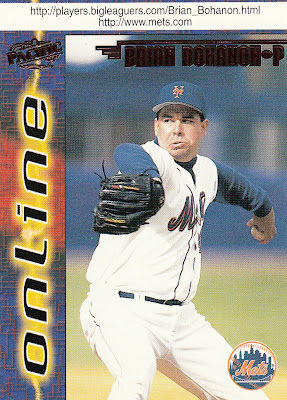 I completely forgot about Brian Bohanon, who spent 1997 and half of 1998 in Queens.  Nothing extraordinary about his time as a Met (8-8, 3.57), but he was an effective member of the staff during a time when the Mets fortunes were looking up.  This also happens to be the first of these snazzy Pacific Online cards in my collection.

Elsewhere, Nick is always an ace when it comes to adding onto my player collecting pursuits. 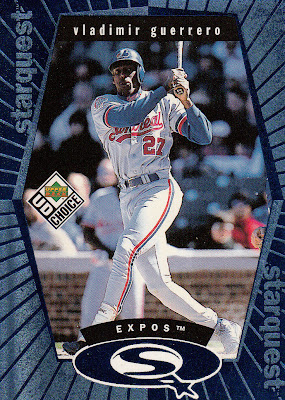 Example A would most certainly be Vladimir Guerrero.  Every padded mailer that arrives from Dime Box Central is always blessed with a few Vlads.  My Guerrero collection now stands at 264 unique cards, thanks in large part to Nick.

Vlad isn't the only player that we share, however, as Nick always finds a way to sneak in some spare Oleruds. 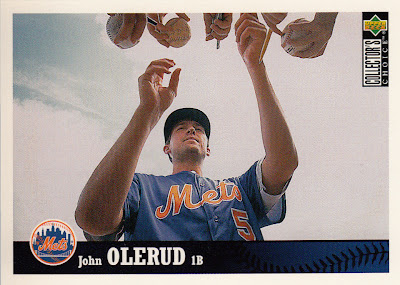 I'm gonna assume that Nick's copy of this card will work it way into his ongoing frankenset project.  At the very least it will be in the running.  A very unique camera angle of Johnny O signing some autographs under partly cloudy skies.

This next guy, you may have heard his name in the news recently...every minute of every day. 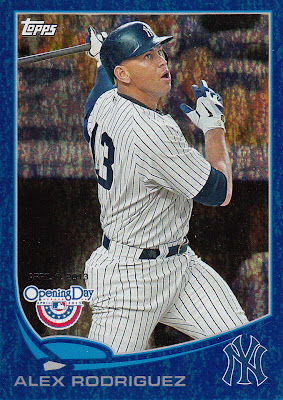 Some might think this would be the right time to abandon their A-Rod collections.  To that I say balderdash! This is the exact perfect time to kick that bad boy into high gear.  Oh boo hoo, he did some drugs and he lied.  No one is baseball has ever done that!  Viva A-Rod! 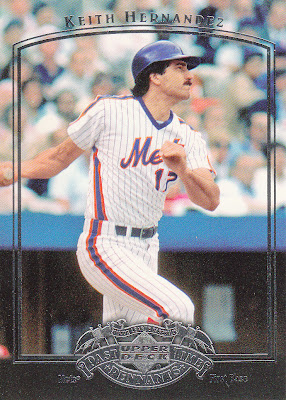 I mean, wasn't Keith Hernandez shuffled out of St. Louis because of, among other things, a rampant cocaine fetish?  In today's social media-mad world, there would probably be thousands of stories and Deadspin videos about Hernandez.  Instead, Keith is a beloved figure in New York, both for his '86 World Series heroics as well as his broadcasting antics presently on SNY.

I know, I know, A-Rod's cheating isn't the same as doing lines in the players' parking lot or smoking in the dugout.  Well, whatever, I'll take A-Rod over a loser like Ryan Braun who basically chastised baseball and all the non-believers last year when he knew he was a lying cheat. 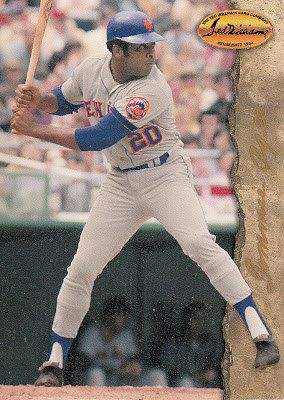 If Tommie Agee's 1970 Topps card wasn't a perfect piece of art, I'd consider using this 1994 Ted Williams Co. card for the ATMP binder.  I love everything about this photo, from the batting helmet to the sideburns to the bare hands to the stirrups. 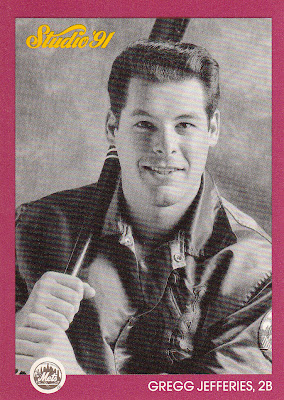 We'll finish up with this.  Back in '91, how badly was Gregg wishing Aaron Spelling would call him for a spot on 90210?  Instead, Spelling went with Brian Austin Green for the role of David Silver, while Jefferies had to continue with baseball.  If only Gregg coulda been around to mentor Ryan Jaronyck...

Another grand slam, Nick.  Thanks for the cards!