Have You Met...? Ken Singleton 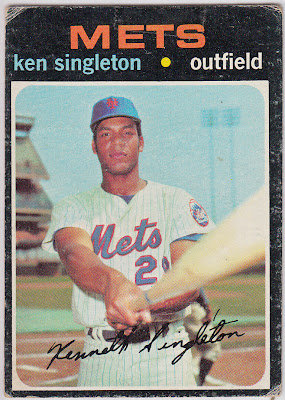 Before he went on to star for the Baltimore Orioles, and long before he became a talking head for the television station of the Evil Empire, Kenny Singleton was a New York Met.

The Mets made Singleton, a New York native, the third-overall selection in the 1967 amateur draft.  Three years later, at the age of 23, the Hofstra product made his big league debut for his hometown club.

In two years in Flushing, Singleton played in 184 games and smacked 18 home runs.  But, prior to the 1972 season, the Mets sent their former first-rounder in a package to the Montreal Expos in exchange for the great Rusty Staub.

The '71 Topps card of Singleton you see above came to me in a PWE courtesy of the GCRL blog.  Judging by the corner wear and what appears to be a piece of scotch tape along the top edge, this boy has been well-loved and well-traveled.  When I come across cards like this, it makes me wonder what sort of stories a piece of cardboard could tell (if it could talk, of course).

Regardless of condition, I really dig the photo of Kenny.  Plus, it's a player that was previously lacking from my All-Time Mets collection.

In addition to the Singleton, Jim included a couple of 1977 set needs in the envelope. 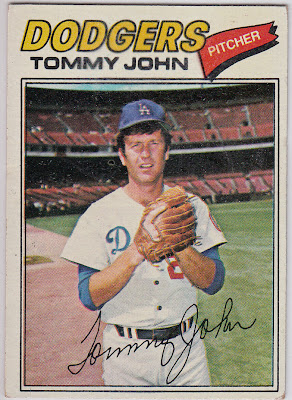 Naturally, one of the cards would have to be a Dodger.  I appreciate this Tommy John card, and I'm happy to admit it to the collection, but I'm all Dodgered-out after the past three nights of baseball torture the Mets endured in Chavez Ravine. 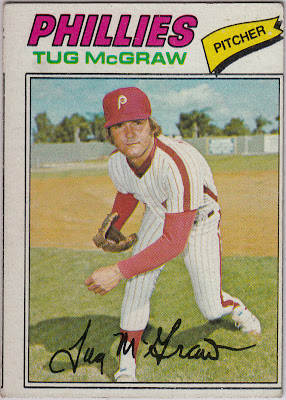 Now this is a player I can get behind.  Perhaps he's not wearing the right uniform, but Tug McGraw is still Tug McGraw regardless of the clown costume he's pictured wearing here.

Many thanks for the goodies from the '70s, Jim!