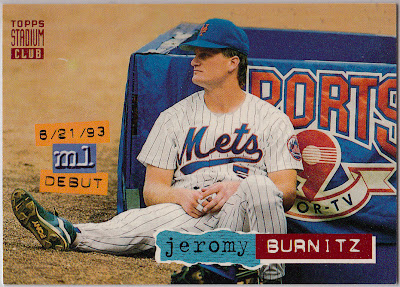 I nice big box of New York Mets cards arrived at Kaz Manor last week, hailing from New Mexico and the lair of Tim Wallach blog's mad scientist, Corey (or Stack, as I call him).

All the cards dated back to the lovable overproduction period -- and I say that genuinely.  I'm never disappointed to receive those splendid "junk wax" cards.  It's my childhood, after all.

Gems like this Jeromy Burnitz '94 TSC card definitely brought a smile to my face.  WOR-TV (or Channel 9 as we in the NY/NJ metro area called it) was the flagship television station for Mets baseball for thousands of years until cable TV swallowed up the entire sports broadcasting racket.  It was a "superstation" at one time, also, as I can recall watching Mets games on WOR when we visited my grandparents in Florida back in the '80s and early '90s. 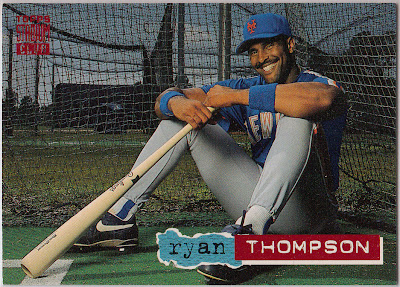 The Burnitz card is one I've seen before, but never had I witnessed this Ryan Thompson card til the box o' Mets arrived from Stack.  Thompson's trademark style is on full display in this quirky card that could only come from the annals of old-school Stadium Club.

Both of these TSC cards may force themselves into the All-Time Mets Project.  Remember, each player gets just one card to represent them in the binder.  I can't imagine a better specimen of either player. 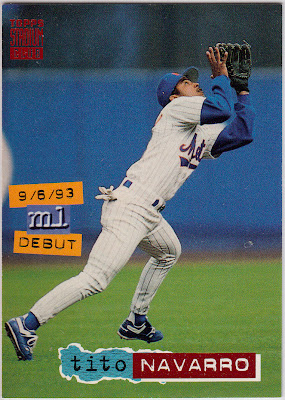 Sticking with the Stadium Club theme for a moment longer, we find little-known shortstop Tito Navarro, who appared in just 11 more Major League games following his September 6, 1993 debut.  His only career RBI defeated the Braves in 10 innings on September 18 of the '93 campagin. 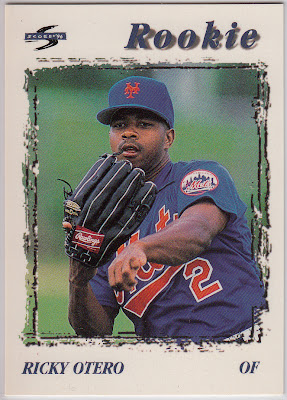 The speedy Ricky Otero played in 35 games for the Mets in 1995 before moving on to Philadelphia for a pair of seasons with the Phillies.  He was out of big leagues thereafter.  He managed just seven hits in 51 ABs (.137 BA) as a Metropolitan. 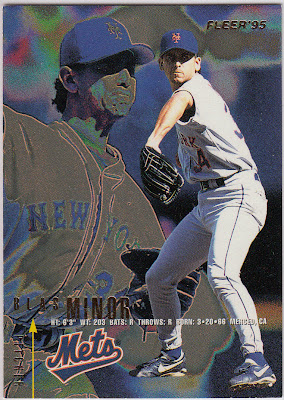 Boy oh boy, did Fleer Update '95 produce some scarce players.  And for that, I love 'em!  Much like fellow hurler Kevin Lomon who also appears in this set, I hadn't a clue a Blas Minor Mets card existed. Furthermore, I had no recolletion of Blas Minor pitching for the Mets.  A double bonus! 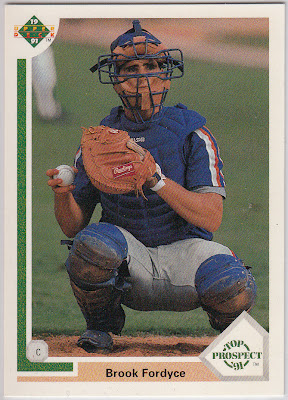 The extent of Brook Fordyce's big league service in Queens equaled four games, all within the 1995 season.  His only folly was coming up around the same time as Todd Hundley.  He would go on to play for the Reds, White Sox, Orioles and Devil Rays over the next nine seasons.

Four very obscure and much-appreciated additions to the Mets count.  To be honest, I get more excited about cards of guys like Navarro and Fordyce because they're often times tougher to come by than the established stars.

Thanks for all the Amazin' cardboard, Stack!  And may Wallach be with you, always...