Clubhouse Correspondence: Swing and a Pop-Up 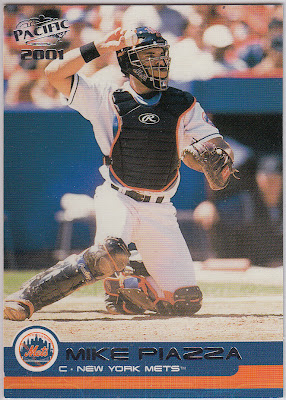 Every so often you come across a photo on a certain card that puzzles you for a moment or two.  Such was the case with this 2001 Mike Piazza card from the Pacific collection.

The hockey-style mask; when the hell did Mike Piazza wear the hockey-style mask?  Then it dawned on me. Since this is a 2001 card, the photo is most certainly from the prior season.  And what happened to him during that 2000 season that might cause Piazza to wear this more protective style of catcher's mask?

In case you forgot, before the whole "I thought the bat was a ball" nonsense from the Subway World Series in '00, Clemens felt the need to throw the ball at Piazza's head in a regular season meeting between the two clubs in July.  Cos, y'know, Mike had essentially embarrassed Clemens in every prior matchup.

Anyhow, as a result, Piazza was advised to wear the hockey-style mask upon returning the lineup following the All-Star break.  From what I recall, Piazza hated the mask and didn't wear it very long.

I've never seen another card featuring Mike with the goalie mask til this one arrived in a package from Bert of Swing and a Pop-Up recently. 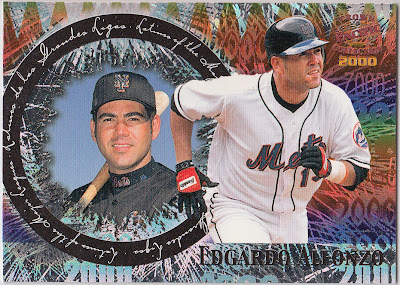 To my delight, there were a few amazing Pacific-brand cards included in the mix.  To some, Pacific and its many eccentric sets and styles are something of a blight, but I love 'em all.  If can add unique and colorful cards of my favorite players, like Edgardo Alfonzo, then I'm all for it.  It's, like, pizzazz, man! 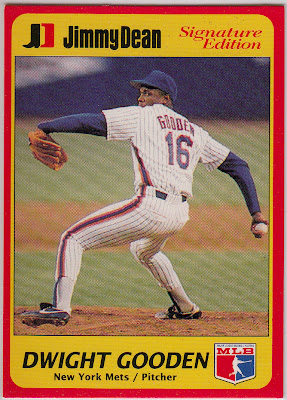 Oddballs are always favorites around the Clubhouse.  Whether they came from a package of breakfast sausages or in eggs containing ladies' pantyhose, it's all the same, and it's all good.  Give Jimmy Dean some credit, as this photo captures the iconic pitching motion of Dr. K circa 1990. 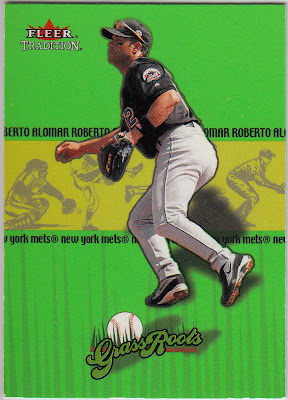 I only wish my lawn looked this lush and healthy.  Roberto Alomar, a sure-fire Hall of Famer but a pretty forgettable Met. 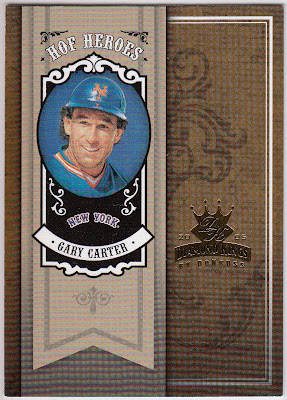 The composition of this 2005 Donruss Diamond Kings insert leads me to believe it was designed to hold some fashion of bat or jersey relic, or both.  Kinda like Topps does nowadays for every insert they produce. I certainly don't mind in this case, though, as the Kid can do no wrong even on baseball cards. 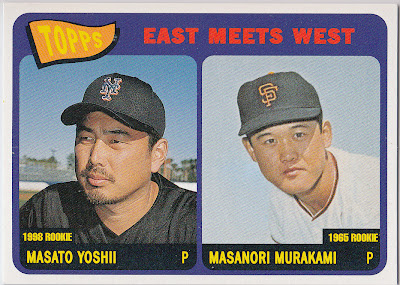 I had to do a double-take on this one, because I initially thought it was a card I already had.  But upon further inspection, this one features former Mets hurler Masato Yoshii and not outfielder Tsuyoshi Shinjo, which would be the "East Meets West" card that already owns space in my collection.  A great find, Bert! 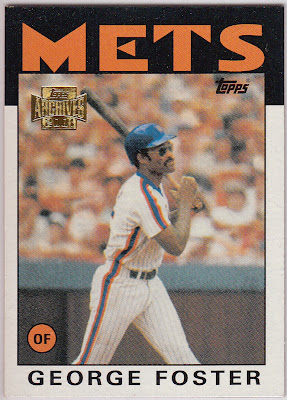 The dark aviator shades and seemingly lazy follow-through on the swing make George Foster look more like a hitchhiker than a former MVP.  By the time the original copy of this '86 Topps card came out, Foster's best days had faded and his playing time in a crowded Mets outfield had seriously dwindled.  Still, Foster is a player that intrigues me.  It's always fun to get cards of his. 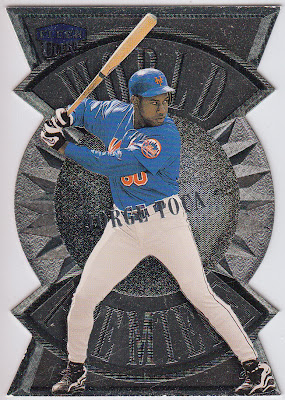 A neat insert of an obscure Met.  Jorge Toca's last name lent itself to any number of tedious and outright annoying plays-on-words.  For instance, Jorge drives in a run to give the Mets a lead in a late-season ballgame at Shea.  Logically, "It's a Toca Party here at Shea Stadium!"  You might not be surprised to know that Tim McCarver used that exact phrase in a Fox telecast during September 2000. 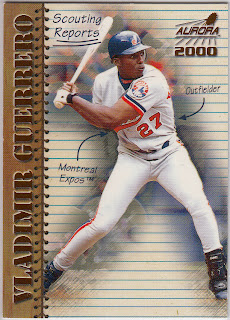 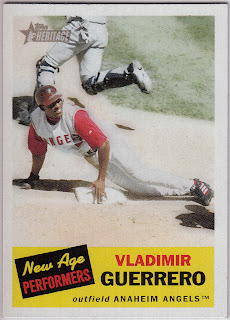 Some really fantastic Vladimir Guerrero cards made their way into the package from New Hampshire.  Just a couple to highlight here, both inserts.  To play it fair, I plucked one from his Montreal days and one from his L.A. days.  In particular, the level of activity on the New Age Performers insert form Topps Heritage is tremendous.  I guess we have to assume some sort of rundown sequence is unfolding since the catcher appears to be rounding third base in a Piersall-esque manner in pursuit of another baserunner.

Many thanks to you, Bert, for these and all the cards that traveled south from New England recently!