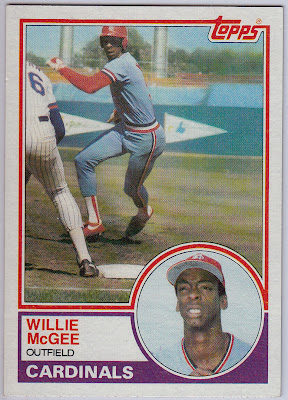 It's always a treat to come across an iconic card for a bargain basement price.  Example A is Willie McGee's 1983 Topps rookie card.  You might not consider it to be any sort of cardboard mile marker, but I've always held it in pretty high esteem.

See, I used to have a baseball card price guide a long, long time ago -- I'm talking long ago, like "I bought it at my grammar school's book fair" long ago.  And the 1983 Topps pricing section featured Willie's card as a sample of what I assume the publisher deemed one of the more important cards.  Well, when you're 8 or 9 years old, you tend to put a lot of stock in that sort of thing.  Thus, I always hoped that someday I'd have a copy for my own.

Plus, you know, this is one of the more outstanding photographs to ever grace the face of a baseball card.  Its real beauty lies in the quirky nature of the cropping.  You've got half a first baseman and only 7/8 of McGee's head.  And the action sequence is amazing.  Looks like a scene from Veritgo.  And I haven't even touched on the background, replete with blue Shea Stadium wall, tarped-over bleachers and steel light stanchions.  Did we yet mention the inset photo, with a sneering Willie?

Easily, McGee's '83 issue is one of the top cards of the decade.

This card and the ones I'm about to feature were among the hundreds I snagged for a nickel each at last month's mall show.  Best deal in town! 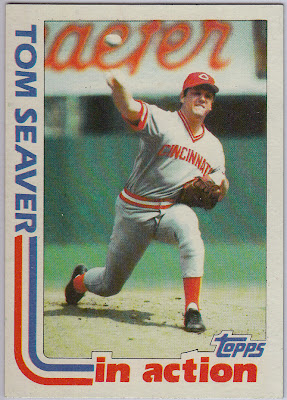 Not only is Tom Terrific "in action" on this '82 Topps card, but he happens to be in action at Shea Stadium.  The Schaefer beer advertising panel int he background is a dead giveaway! 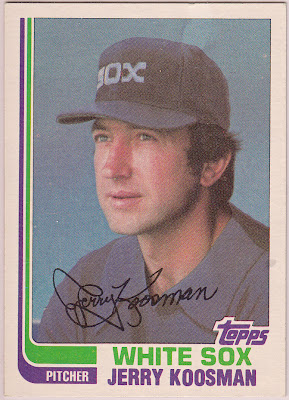 I've really become fixated on '82 Topps lately.  I guess I can thank this year's Archives release for that.  In some far-off day, I'll begin the task of putting the set together.  Until then, I'll just enjoy some individual pieces, like this Koosman. 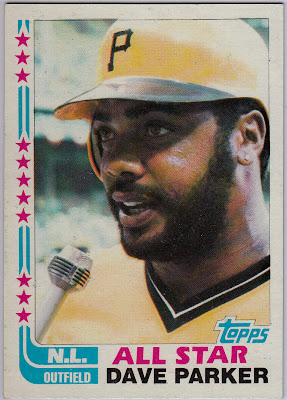 ...And this Dave Parker All-Star card. 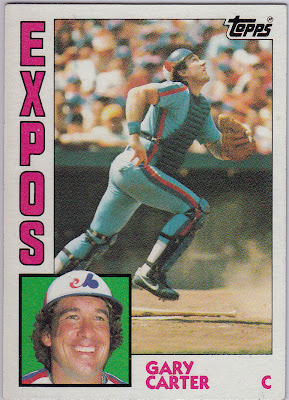 The 1984 Topps design is kind of a 'meh' experience for me.  As others have stated numerous times before, the '84 effort was essentially of a weak redo of the previous year's template.  Still, with the right player and the right photo, an '84 Topps card can really pop.  The above Gary Carter is a fine example of this. 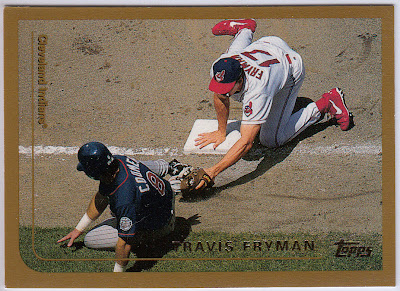 Mid-to-late '90s Topps is basically an unexplored frontier for me.  I bought very few packs between 1995 and, well, 2010, but the sets from '98 to 2004 are the most alien to me.  Thus, I was happy to find quite a few cards from sets like 1999 Topps.  This set, like the 2000 set, is odd because it doesn't feature the standard 660-plus cards.  It's considerably smaller.  The reason for that, I don't know.  But, the quality of the individual cards didn't suffer much at all.  In fact, it probably improved quite a bit.  Travis Fryman's '99 Topps card is solid proof of that. 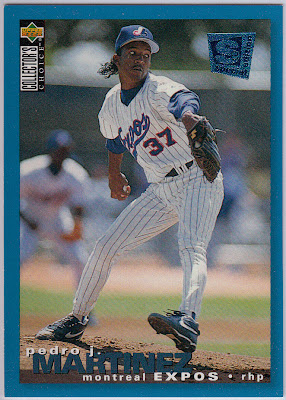 Does anyone remember the other Pedro Martinez?  You know, Pedro A. Martinez?  I recall 1994 Collector's Choice had cards of both, the other being a Padres pitcher at the time.  That was the first time I became aware there were two Pedro Martinezes.  The Pedro you see above was only beginning to make a name for himself, so he still received the middle initial treatment from certain companies on some of his cards.  Before too long, however, the middle initial would disappear, just like the other Pedro Martinez. 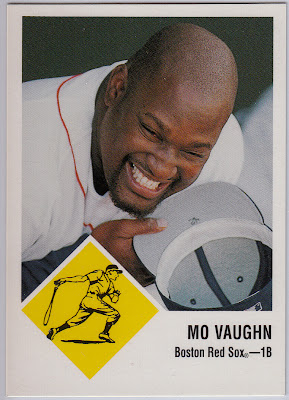 I've always been fascinated and borderline obsessed with baseball caps.  I was constantly wearing one when I was growing up.  Whether I was playing ball with my buddies or eating Easter supper, I would always have my ball cap.  I kinda outgrew that once I got into my 20s, but I still love a good cap.  I suppose that's why I'm partial to cards with players fooling with their caps or adjusting them or taking them off, etc.  I'm not sure what Big Mo is doing with his cap, but he's having a good time of it. 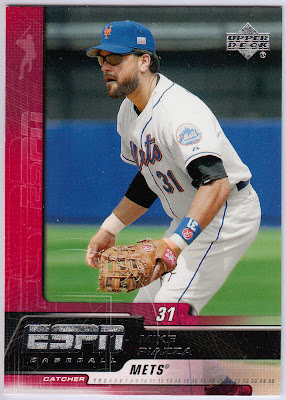 In 2004, the Mets tried moving Mike Piazza to first base on a part-time basis to extend his career and keep his bat in the lineup without creating a defensive liability at the catcher's position.  And since the Mets play real baseball -- aka the National League -- and there's no such thing as the DH, the most likely place to 'hide' a player is first base.  He wasn't very good there, either, but you can't blame the Mets for trying.  Anyhow, you don't see too many cards of Piazza playing the field, so I got a kick out of this one.  By the way, the less areas of life that ESPN oozes itself into, the better!  So I'm glad this set didn't last. 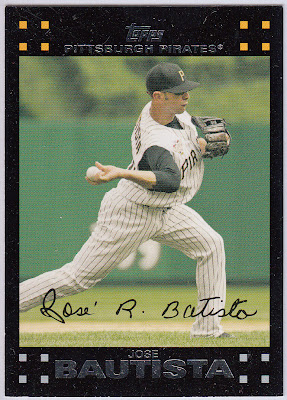 I dabble in a little social media from time to time, but I'm not one of these obsessed people who has to tweet or drop Facebook status updates when they're in the hospital waiting room.  Hell, my phone doesn't even have a data plan.  Anyhow, it was  my own personal social media "Story of the Year" when I recently received an email notification that Jose Bautista -- the real MLB Jose Bautista, not Jose B. from 125th Street -- was now following me on Twitter!  How and why, I can't say because I don't know.  I don't even really tweet that much.  Irrespective of circumstances, I puffed my chest out a little further in the aftermath of that knowledge.

Now, if I can just get more than five people to read this blog, I'll be ready to take on the world...