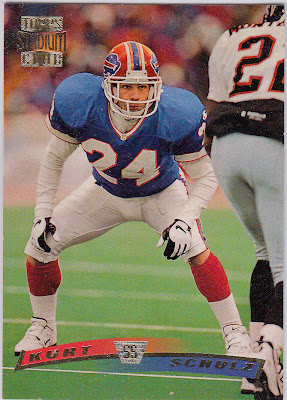 Happy Sunday!  When the calendar flips to Septebmer and the weather takes a turn for the nippy, the imaginary multi-purpose stadium here at TWTTC converts from baseball to football dimensions.  At least on Sundays.  I missed the chance to post last week -- opening week -- because I was actually up in Buffalo with my pals to take in the pageantry of the Bills home opener.  Not a happy result, but a great weekend per usual.

Anyhow, we move forward and focus on Week 2 in the NFL.  A trio of marquee games highlight today's slate, beginning with a crucial Redskins/Packers clash at 1 p.m. and concluding with a NFC West grudge match tonight between the Niners and Seahawks.  Smushed in-between is that little matter of the Manning Bowl, Pt. 3 in East Rutherford.  Just your normal second week in the NFL, right?

Well, here at the Clubhouse, we focus on our beloved Buffalo Bills.  Tough-luck losers to New England a week ago, the Bills play at Ralph Wilson Stadium for a second straight game, this time hosting the similarly 0-1 Carolina Panthers.  Cam Newton and Co. nearly pulled off the upset over the Seahawks in Charlotte last Sunday, but are now faced with an 0-2 start unless they come away with a win in Orchard Park this afternoon.

I received an email from an associate recently asking me about the Bills/Panthers series.  Kind of an unusual pairing at first glance.  The question: Have the Panthers even played in Buffalo before?  The answer: Yes, three times actually.  Most recently, the Cats scratched out an ugly 13-9 win over J.P. Losman, Willis McGahee and the Bills in November of 2005.

Buffalo leads the all-time series 4-1, including a 20-9 victory at Carolina four years ago.

But the game between these two interconference foes that stands out most to me is their first-ever meeting, way back in Week 2 of the 1995 season.  That happened to be the inaugural season of Carolina Panthers football, with former Jim Kelly back-up Frank Reich at the helm for the expansion club.

It was the home opener for Buffalo, which was stomped the week prior by Denver in front of a Sunday night national audience.  And the patrons at then-named Rich Stadium had to be getting itchy when the Panthers went up 9-0 early in the second half on the strength of John Kasay's third field goal. 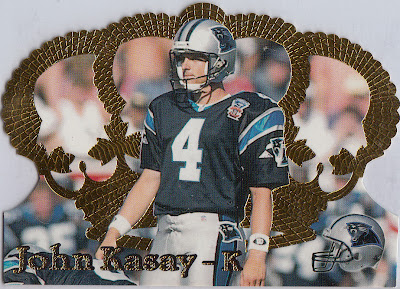 But, the Bills, sparked by a Kelly-to-Russell Copeland 77-yard scoring strike on the ensuing drive, went on to score 31 unanswered points to secure the win.  Free safety Kurt Schultz, shown atop the post, crushed any hope of a Panthers comeback when he stepped in front of a Reich pass late in the third quarter and raced 32 yards for a touchdown.  The Labatt Blues went down a tad easier for the home fans at the post-game tailgates, I'm sure.

As for today, neither squad wants to start the season 0-2, but I'd say this one is a bit more critical for the Panthers.  After all, the Bills are under the helm of both a rookie head coach and a rookie quarterback, not to mention brand new coordinators all around.  Thus, expectations in Western New York aren't exactly high.

Nonetheless, I think this plays out to be a fun game.  The favored Panthers probably will come away with a W in the end, but I'm looking for strides from EJ Manuel, who showed flashes of promise against the Pats. My area of concern, however, is the running game for the Bills, in that CJ Spiller clearly wasn't himself last week.  Couple that with a Panthers D that handcuffed Beastmode and the 'Hawks ground attack seven days ago, and this could be a sticky situation for Buffalo.  Additionally, Cam Newton could be in for a huge day against a banged-up Bills secondary.

Oh, and in case anyone cares, give me the Packers, Broncos and Niners in those three marquee games.

Enjoy your NFL Sunday!  (Or your MLB Sunday if you could give two squats about football.)