Ocho Orel (aka A Case for Art Appreciation) 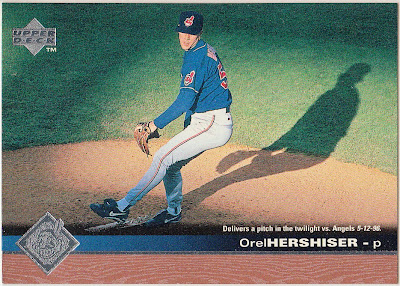 One of the reasons I like to keep the cards from my player collections in soft sleeves is kind of a childish one. Then again, most outsiders might insist this hobby is for kids, so what difference does it make?

Anyhow, back to my immature reasoning.  I like to think of each card as its own piece of miniature art.  And while one wouldn't think of cobbling together a bunch of Van Goghs or Dalis for instantaneous viewing, I've tended to shy away from the binder method for my player collections despite several fractured attempts.  Instead, each player-collection card resides in its own sleeve, organized within a slotted box and available for individual gazing anytime I need a fix.

But Mark, then why is it okay to put your complete sets in binders?

Well, okay, because there is a sense of order and balance with complete sets.  The card designs are alike and there is a numeric sequencing that keeps the cards in order and their collector sane.  Get it?

Anyhow, I respect all the different techniques and methods that all of you out there subscribe to for your collection.  There is no wrong way of doing things, which is one of the more comforting ideas embedded into our little hobby.  Do what you do and don't worry about what the Joneses are up to.

The above 1997 Upper Deck masterpiece of Orel Hershiser is a card that I'd call to the witness stand if I were asked to defend my penny-sleeve-over-binder-page argument in court.  In one snapshot, it encompasses everything perfect about a baseball card, and maybe the game itself.  It's art without the pretense and brawn with a brain.  Kinda like Orel himself.  Clearly, it's one of the most stunning cards Upper Deck ever fashioned.  It was also one of my eight Hershiser acquisitions at Sunday's card show.  At just four cents, it was a true steal. Perhaps my favorite pickup from the show.

Here're the rest of my new Orels, shown in chronological order by year...


Look at that face on the '97 Ultra, would ya.  The Bulldog is, without a doubt, one of the most fun players to collect.  Lots of quirky cards and plenty of battle-snarled faces.  I know he's ultimately a Dodger at heart, but I'm proud of Orel's brief time as a Met and I'm glad he wore the orange and blue at least for a season.

Next time, a six-pack of one of my favorite all-time backstops...