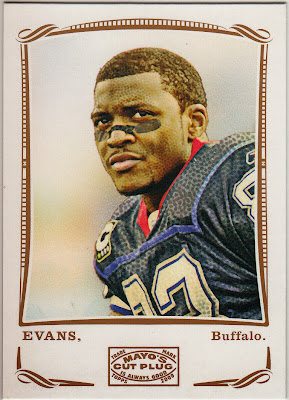 It's very rare that a season that produces only four wins would provide so many indelible memories.  Such was the case of the 2010 Buffalo Bills who, under the management of first-year head coach Chan Gailey, lost their first eight games en route to a 4-12 mark.

Don't get me wrong, there were a ladle full of forgettable efforts and results speckled throughout the 2010 campaign.  However, skimming the season based off final record would cause you to miss three wild overtime losses to three playoff-bound teams (including the eventual AFC champs); a shootout loss to the New England Patriots; and a three-point loss to a Bears team that was a quarter away from the Super Bowl.

One such memorable loss that would fit into the first of the aforementioned categories came against the Baltimore Ravens, a team Buffalo will encounter this afternoon in Orchard Park, NY.  Buffalo was 0-5 following its bye week and a frustrating home defeat to the Jacksonville Jaguars. Heading into Baltimore to play a heavily-favored 4-2 Ravens squad, not much was expected of a Bills team that had been outscored 161-87 over the first five contests.

Out of the gates, though, the Bills built a surprising 14-point lead midway through the second quarter.  Lee Evans, who had been seemingly invisible to that point in the season, hauled in a 20-yard pass from Ryan Fitzpatrick that gave Buffalo a 24-10 lead.  It was Evans' second TD of the game.  But the Bills yielded 10 points to Baltimore before the half and, eventually, found themselves trailing the Ravens 34-24 late in the fourth quarter.


Rather than throw in the towel, though, the Bills went to work, as Fitzpatrick hooked up with Evans for the tandem's third TD connection of the day, a 17-yarder with just under six minutes to play.  And with seconds on the clock, Rian Lindell hit a 50-yard FG to unbelievably send the game into overtime.

Unfortunately for the Bills and their fans, the Ravens would kick the winning field goal in the extra frame and the Bills would drop to 0-6.  The following week, Buffalo would again go on the road and take a playoff caliber team to overtime, as Todd Haley's Chiefs would survive the Bills' uprising.  Tack on a three-point loss to the Bears a week after that, and you could sense the Bills were getting close to turning the corner.

And, they did win their next two games and, after that, lost another OT heartbreaker to the Steelers.  This six-game stretch essentially defined Buffalo's season.  Very easily they could have been 5-1 or 6-0 during this stretch and, therefore, woulda been in the mix.  Then again, good teams win the close games and, in 2010, the Bills were not a good team.

As far as Lee Evans goes, this game was pretty much his swan song as a Buffalo Bill.  Though he finished out the season with the Bills, it was clear the aging star was on the decline.  Furthermore, he didn't fit the scheme of Gailey and his short-passing spread offense approach.  Evans compiled 105 yards and three TDs on that October Sunday against Baltimore, but completed the season with just 578 yards and four scores.  The man who ranks third in Bills annals in receiving yards and receiving TDs joined the Ravens the following season.  You might remember him dropping a pretty big would-be touchdown in the AFC title game against the Pats.

Back to the future now, and today's Bills-Ravens clash.  The Bills and their rookie QB were handed their teeth by Rex Ryan and the Jets last Sunday, while Baltimore (as I predicted) smacked the favored Texans at M&T Bank Stadium.  Baltimore's defense looks like, well, Baltimore's defense again after rebounding from the opening week salvo engineered by the immortal Petyon Manning.  That probably doesn't bode well for EJ Manuel and the Bills, who looked uninspired and overmatched on offense versus New York's scheme.  Don't expect the Ravens to cut the Bills any slack this week.  Could be another one of those annoying "teachable moments" at Ralph Wilson Stadium for Manuel.  On the other side of the ball, look for Joe Flacco to test Buffalo's battered secondary, specifically whichever poor CB has to cover Torrey Smith.  Smith might be fantasy football gold today, especially if neither Leodis McKevlin or Jairus Byrd suit up.