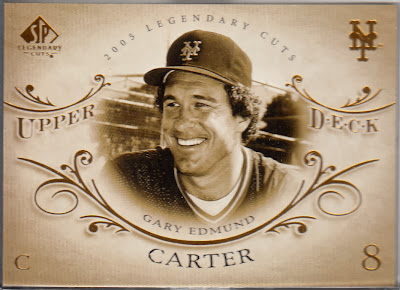 Before completely indulging myself in all the caloric spoils of a football Sunday at my favorite pub, I was able to sneak in an hour or so at the monthly card show at my local fire house.  It's been a while since I went to this show (or any show), and my main focus was shaving cards off my 2013 checklists -- namely Series 2 Topps, Heritage and Archives.

But, you know how that old song and dance goes, right?  Although I attacked my Series 2 and Heritage needs with great gusto (not so much with Archives), I couldn't resist the siren song from some of the other cardboard distractions on hand.  Namely a table that boasted monster boxes with "25 cards for a $1" placards.  I had three single bills that were burning a hole in my pocket and about 15 minutes to spare before I had to depart the show.

Lots of beautiful junk wax and mid-'90s stuff of lots of great players.  If I had more time, I'd probably still be at that table going through all the boxes.  As it was, I had to quickly flip through a few rows of cards, not being as thorough as I usually am.  Nonetheless, I turned up some real winners in my hasty search.

For this post, I'll focus on eight new-to-me cards of Gary Carter, one of the most wonderful human beings to ever put on a baseball uniform.  The first of the octet, the headliner card you see above, is form SP's 2005 "Legendary Cuts" set, which I hadn't seen before.  A beautiful set like this is the kind of thing Upper Deck ought to be remembered for, not arbitrary, wasteful crap like their Documentary set or the banal 2010 swan song.

The next seven cards of Kid all hail from that glorious overproduction era that so many of us grew up during.


At four cents apiece, it's pretty hard to argue with any of these pickups.  When I look at any of Carter's cards, I can't help but smile.  It reminds me of card collecting from my childhood.  And, well, Gary's smile is contagious, so it's next-to-impossible to not crack at least a grin when you look at the guy.  Jeez, I can't believe he's passed on.  The worlds is a worse place without Gary Carter, that's a fact.

In my next post, we'll go over a little "Orel" history...