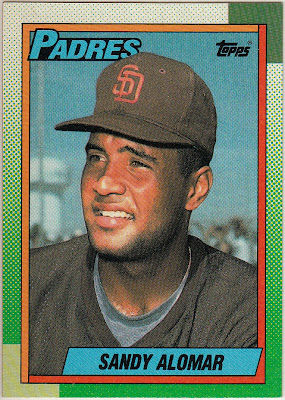 In about a month from now, we here in the Mid-Atlantic and Northeast will reach the one-year anniversary of Hurricane Sandy, one of the deadliest and costliest storms in American history.  Not to burden poor ol' Sandy Alomar, Jr. with any of that, but I remember posting a card of his a day or so before the storm breached the Jersey shoreline.  So, fair or unfair, I guess I'll always kinda associate the long-time backstop with the hurricane.

That doesn't dampen my enthusiasm for his cards, not one iota.  When I was hastily browsing through the 25/$1 box at last Sunday's show, I was happy to stumble across half a dozen cards of Sandy that were missing from my player collection.  I'm sure there were oodles more in that very same box and its identical twins at the seller's table, but time squeezed me out of discovering them.

Nonetheless, it was all about quality, not necessarily quantity.  The above 1990 Topps is Alomar's second-year Topps card.  Recall, he had a "Future Stars" card in the beautiful '89 set.  This was Sandy's final Topps card in brown 'n orange, as he was flipped to the Tribe in December of 1989 and featured in Indians garb in the '90 Topps Traded set.

The excess of the 1990's baseball landscape afforded the players of that era a barrel full of cards.  I won't even try to guess how many Sandy Alomar cards exist, but I'm positive it's a pretty outrageous number.  I wouldn't mind hunting down as many of them as possible.

There are plenty of him in a Cleveland uniform, this we know.

I absolutely favor the cards of Sandy wearing the catcher's gear.  After all, he's most known for being one of the best technical backstops of his era.  And, well, the majority of his cards feature badass action sequences of him blocking the plate or tagging out a runner or busting his arse to chase down a pop-up, etc.


It's a tough call between this '04 Fleer Tradition and the '96 TSC as to which was my favorite of the new-to-me Alomars.  Look closely at Sandy's uniform on this Fleer card: number above the right thigh and the blue/red stripe around the sleeve.  These are some throwback threads!  That certainly earns this card some bonus points and may give it the edge.