Today, the Buffalo Bills (2-3) host the Cincinnati Bengals (3-2) at 1 p.m.  The Bengals are coming off a huge victory over Tom Brady and Patriots, while the Bills have had a long time to ponder last Thursday's loss to the Cleveland Browns.

I hope everybody is ready for the classic QB matchup that is Andy Daulton vs. Thad Lewis.


Thad Lewis is pressed into action today in the aftermath of EJ Manuel's LCL sprain that will sideline him for the next few weeks.  Backup Jeff Tuel, who entered the Browns game and looked like a stranger in a strange land, is an undrafted rookie who is obviously not ready to operate within an NFL framework.  So rather than chase after one of the many middling FAs on the market, the Bills dipped into their practice squad for their own unknown quantity.

A Duke product, Lewis has started one NFL game:  the season finale last year in Pittsburgh.  And that was as a member of the Browns.  So there isn't much to glean on Thad other than that and his performance from this year's preseason finale versus Detroit.  He's got many of the same tools as Manuel in terms of mobility and quickness, but lacks EJ's rocket arm and linebacker-esque size.

I guess we'll have to watch and see.

Today's game is the 26th time the Bills and Bengals have locked horns dating back to 1968, with Buffalo holding a 15-10 advantage all-time.  Daulton and the Bengals beat the Bills in their last meeting, a 23-20 decision in 2011.  Unbelievably, that snapped Buffalo's 10-game winning streak in the series.

Prior to that win, Cincinnati's last triumph over Buffalo occurred when this guy was behind center:


Boomer and the Bengals not only beat the Bills during the 1988 regular season, but also denied the Bills their first-ever Super Bowl trip when Cincinnati knocked out the Bills, 21-10, in that year's AFC title game.  That's when, you know, the Bengals were a proud franchise.  And when sneakers came with a built in air pump.  In other words, long, long, looooong ago.

Getting back to today's game, the Bills could get a huge boost to their defense with the return of top CB Stephon Gilmore and top safety Jairus Byrd.  With Cincy's array of talented WRs and TEs, the timing couldn't be better.

On offense, the Bills are hoping that CJ Spiller and Stevie Johnson will be able to go.  Both are listed as questionable, but I think the former is a pretty safe bet to play.  Not sure about Stevie, who will be a game-time decision. 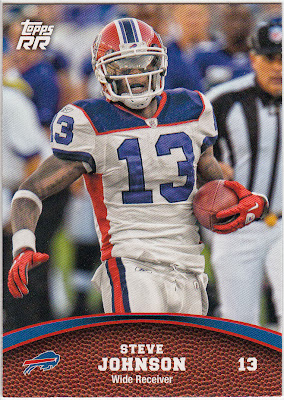 Speaking of Stevie and the Bengals, it was the 2010 matchup that saw Johnson haul in three second-half TDs and lead Buffalo from a 17-point deficit to a 49-31 road victory.  It was also the occasion that Stevie unveiled this bit of, uh, personality:


Hey, when you're a 1-8 team--which Buffalo was at the time of Stevie's stunt--and your team scores five unanswered TDs to erase a big deficit, I guess you are allowed to have a little fun.  (I think.)

I have no idea how to handicap today's game.  The Bengals are a five-point road favorite, and rightly so considering the Bills' QB situation.  But, Buffalo's defense has been strong and Cincy's offense has been somewhat spotty.  So I suspect this will be a much closer game than some folks might expect.  I hope Thad makes me a believer, but I think the Bengals will make enough plays to pull out a W at The Ralph.

My Week 6 Picks:  I hit on the Saints and Colts last weekend, but failed badly with the G-men.  This week, let me get the Steelers (+1) to beat the Jets; the Raiders (+7.5) to lose a close game or win outright in Kansas City; and the Patriots (-2) to tarnish the unbeaten Saints in primetime.