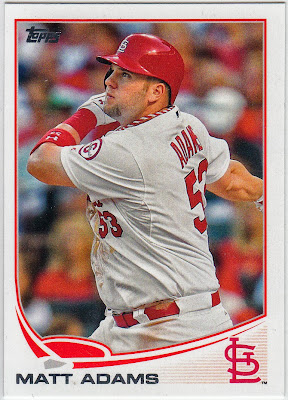 I'm sure I'm not the only one who has noticed this, and probably not the first to blog about it.  But why in the Wide World of Sports are there two Matt Adamses in this year's Update set?

Above you see the first Matt Adams, card No. US4.

But then his evil twin appears later in the checklist with card No. US213: 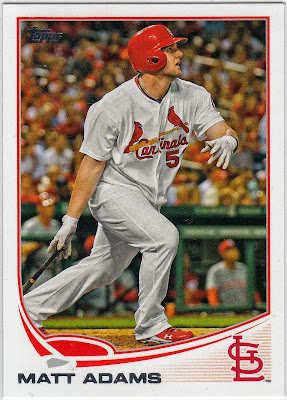 Will the zit-faced interns at Topps be fighting among themselves to be the first to offer an explanation for this?  I know this isn't the first time Topps has goofed and included a base card for the same player multiple times in a checklist.  (The Mark Teixeira twins from 2011 Heritage spring to mind.)  But, good grief, how about a little quality control so this sort of thing doesn't happen every two or three years?  Heck, if I did something as careless as this at my job...

Now allow me to parlay Topps' gaffe into my official World Series prediction.  Originally, I went with the Sox in seven games.  But, the Ancient Aliens-watching part of my brain can't help but think this Matt Adams thing is some sort of secret message, or perhaps a clue to the outcome of the series.

So, my formal prediction in light of recent events: Cardinals in six.