Not Ready for Primetime Players 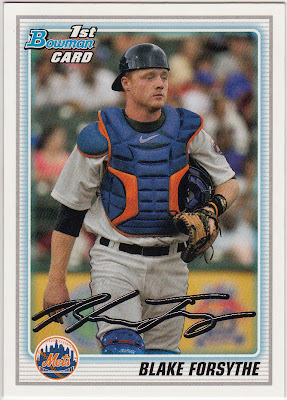 Not every player and not every card gets to make it into the All-Time Mets Project binder.  It's a solemn reminder that not everything in life is all-inclusive.  I didn't make the National Honors Society in high school (despite having a top-20 GPA, mind you) and I'll never be a member at Augusta National.  I can live with both of those things, I suppose.

But, just 'cause you don't fit the mold of a certain club or organization doesn't mean you're any less important to someone or something.  Right?  Right.

What I'm getting at pertains to a very thoughtful PWE delivery I received from north of the border.  Douglas of Sportscards From the Dollar Store previously hooked me up with a bevvy of names that were missing from my ATMP checklist.  The envelope that arrived from Ontario late last week had an assortment of cards featuring a few must-have Mets names as well as a few guys who I'll call Not Ready for Primetime Players (in honor of SNL chief Lorne Michaels, who also happens to be Canadian).

Now, while I do place a premium on the Mets who have made the big league rosters, that doesn't mean I cast aside the almost-was population.  If one of the card companies took the time to slap these guys on a piece of cardboard, they'll find a spot in my collection.

The above card is a fine example.  I really hope Blake Forsythe makes it to Citi Field someday, because I'm a sucker for catcher's gear cards and this is a nice one.  It would be a nice addition to the ATMP checklist. Forsythe, who the Mets drafted out of the University of Tennessee in 2010, appeared in 88 games for Double-A Binghamton this past season, slugging 10 homers and driving in 33 runs.  Not bad...until you take a quick glance at the BA category which reads .192. Eek!  Well...still...it's a nice card. 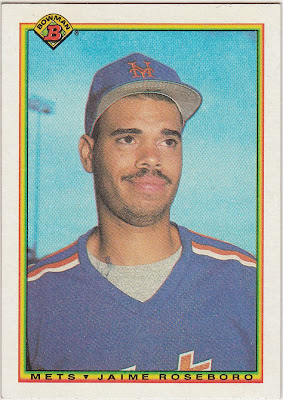 Though he never made the bigs, I'll gladly take this card of career minor leaguer Jaime Roseboro.  As you might have seen on this blog before, I'm not shy about professing my unusual fascination with 1990 Bowman.  One of these days I'll get around to putting the set together.  Anyhow, back to Jaime, who batted .309 in 95 games for Single-A St. Lucie in 1989.  I guess that's why Bowman tabbed him for this set; they like to get the jump on the best prospects because, you know, that's their thing.  Unfortunately, Jaime scaled only as high as Triple-A Tidewater (1991). 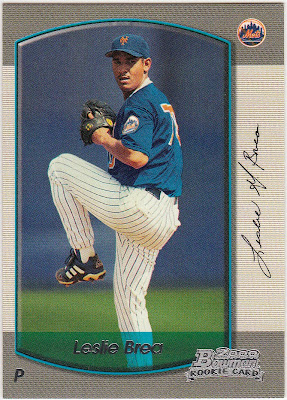 Leslie Brea never pitched for the New York Mets, but he was a barter piece in two very dubious Mets trades. (Well, they were dubious by my account anyhow.)  In December of 1998, the Seattle Mariners swapped the minor leaguer Brea to the Mets in exchange for *gulp* Butch Huskey.  My Butch Huskey.  And if that wasn't bad enough, Brea was included in the package that Steve Phillips cooked up in order to acquire shortstop Mike Bordick from Orioles at the 2000 trade deadline.  Bordick wasn't a disaster, but he certainly wasn't worth the price they paid to get him, namely Melvin Mora. 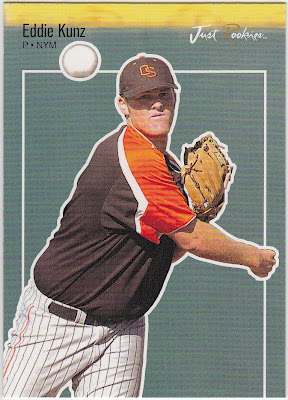 Here's a guy that did make it to the game's biggest stage.  I'm not a huge minor league card guy--though Topps Heritage Minors is getting me warm for such things--but this is a pretty nice looking card.  New York's first-round selection in 2007, Eddie Kunz made a quick ascension to the majors when he pitched in four games for the Mets during the 2008 season.  Alas, that was his only brush with the big leagues.  I think Kunz has an actual big league card, but until I find that this Just Minors piece will serve as a placeholder.

But the real meat of this latest delivery--the Eddie Murphy or John Belushi, if you will--is yet to come... 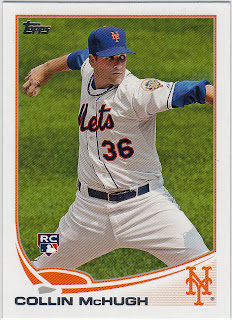 McHugh wasn't long for New York, appearing just 11 games over two years for the Mets as a part-time starter. In June he was shipped to Colorado in exchange for Eric Young, Jr., who became an everyday fixture in left field for the Amazins.  It was a pretty good yield for the Mets, considering McHugh is a former 18th round draft pick.  Not to mention his combined big league record is 0-8.  By the way, this is a 2013 Topps Mini.  My first '13 Mini of the year. 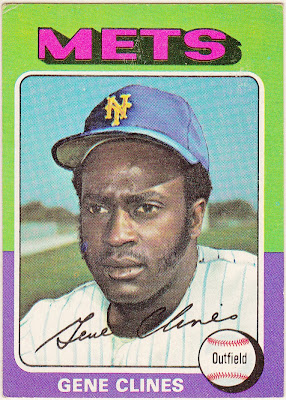 Ah, a little dip into the vintage end of the pool.  This 1975 Gene Clines card is a world-class airbrush job by the elves at Topps.  Clines came over to the Mets via trade in October of 1974 in exchange for Duffy Dyer and played just one season in Queens, hitting .227 in 82 games.  Great card of a one-and-done Met! 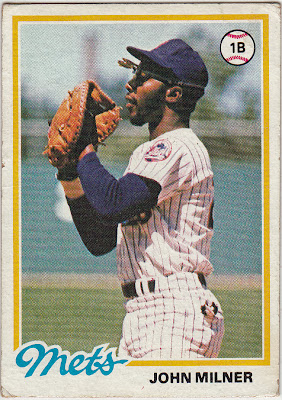 On the other hand, John Milner played seven years for the Mets and led the 1973 NL champions with 23 home runs and was second to Rusty Staub with 72 RBIs.  Though he batted just .245, he crushed 94 homers in his time with New York.  This 1978 Topps card respresents Milner's last in a Mets uniform, as he played the '78 season with Pittsburgh.  The Atlanta native contributed 19 homers to the "We Are Family" Pirates of 1979, who beat the Orioles in seven games to capture the World Series.

Thanks again for this bit of Mets potpourri, Douglas!  I always appreciate any chance I get to blog about those players who only too briefly blazed through the Mets universe, as well as those who never did.