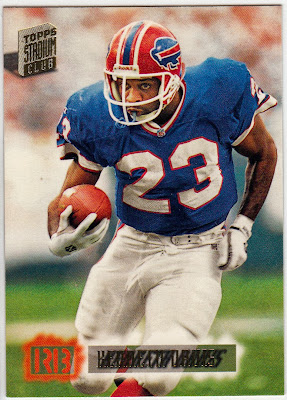 Throw out the records and forget the trends.  This is Week 7 in South Florida.  This is Bills-Dolphins, folks!

And while this isn't the Griese Dolphins against O.J.'s Bills, nor is it Shula vs. Levy, most long-time Bills fans would tell you that the two Dolphins games each year represent the biggest rivalry games on the season-long calendar.  I don't know what Dolphins fans might say; then again I really don't care.

When I was growing up--when the Bills ruled the AFC and Marino's Dolphins were always chasing Buffalo's coattails--two players stood out to me as being complete and total warriors when it came to the Miami game. Neither was among the handful of stars you might first think of when conjuring the early '90s Bills, but both were truly important pieces who were always passionate about this rivalry.

Kenneth Davis (card above) was a second-round pick of the Green Bay Packers in 1986, but he made himself a known commodity by spelling Thurman Thomas for the Super Bowl-era Bills.  In his 12 games against Miami as a Buffalo Bill, Davis sprinted, chugged, and vaulted his way to six TDs.  Impressive for a player who only scored 27 NFL rushing touchdowns during his career.  The Bills were 8-4 vs. Miami in games Davis played. 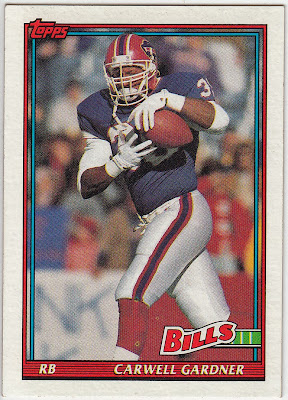 The fullback position never featured prominently in Marv Levy's offense, but when it came to the Dolphins game, Carwell Gardner always seemed to factor into the decision on the score sheet or otherwise.  When he wasn't scoring  a goal-line TD or making a big special teams tackle, the fiesty Gardner was likely to be mixing it up with Buffalo's Enemy No. 1, linebacker Bryan Cox.  I recall more than a few post-whistle clashes between those two. 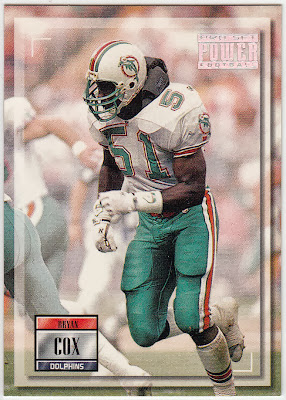 By the way, of Gardner's 10 career TDs on the ground, three of them came against Miami.

The Bills no longer have a rushing attack that consists of Thomas, Davis or Gardner, but their present-day backfield isn't anything to sneeze at.  CJ Spiller, Fred Jackson and Tashard Choice have made Buffalo one of the league's best rushing attacks, and each will be a 'go' today.

Buffalo will need all hands on deck this afternoon in Miami to overcome a fast and talented Dolphins defense which should be getting back Cameron Wake.  Coming off their bye week at 3-2, Miami is well-rested and as healthy as they've been since the season opened.

Other than QB EJ Manuel, Buffalo (2-4) is also pretty fit heading into the game, albeit on the heels of a two-game losing streak.  Thad Lewis played well enough against Cincy last week to lead the Bills on a 14-point 4th quarter rally and an overtime session.  Consider this Lewis's first big test, though, as it's a divisional road game.

The Bills defense will be the key to victory, as Miami's pass blocking and run game have both been suspect this year.  If they can harass Tannehill and force a few TOs, they might be able to escape with a sorely-needed 'W'. Otherwise, it's a 2-5 record and a road date with the Saints next week.  Yikes!

My Week 7 Picks: Well, the Steelers and Pats made me look like a genius last week; not so much with the Raiders, though they made it interesting.  This week, let me get Lions (-2.5) over the Bengals; the Cowboys (+3) to upset Philly; and the Rams (+7) to beat the spread in Carolina.