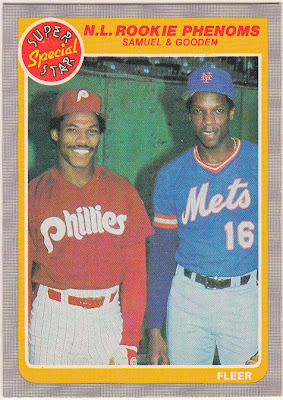 Continuing with a look at a few of the dozens of cards recently sent to me by Kevin, The Diamond King.  Last time we checked out my fave five of Gary Carter, and now we switch to his most famous battery mate, Dwight Gooden.

Above, Doc and Phillies' second baseman Juan Samuel take a moment to pose for one of the SuperStar Special cards from '85 Fleer.  These guys would eventually become teammates--albeit for a very short time--when Samuel was dealt to New York in 1989.


Can it be, back-to-back SuperStar Specials?!  When they're this good, you betcha!  Doc's smooth 'n sweet mechanics are captured to a 'T' on this one.


I love these box sets from the '80s.  Fleer seemingly put out a hundred of these things during the decade, using retailers such as K-Mart, Woolworth or Kaybee to distribute them.  I like this Gooden because of the no-BS look on his face, plus we get a good view of the commemorative patch on the left sleeve.


One of the best Finest sets that Topps ever produced.  And, yes, the very first.  Gooden appears larger than life here.


Topps has produced plenty of quality off-shoot card sets during its many years, but not many top the All-Time Fan Favorites.  It was tough for me to include a card in this fivesome of Doc wearing Pinstripes, but it's too nice a card, plus being of Fan Favorites stock definitely elevates its status.

Still more Diamond King loot to come in the near future.  The next player in the queue is a former Met who finally punched his World Series ticket with this year's NL champs...