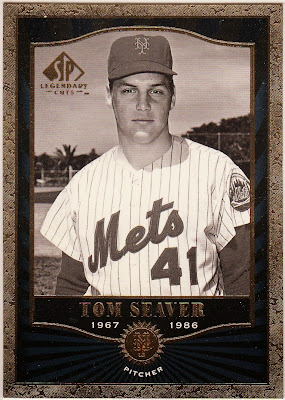 Man, I can't tell you the last time I bought a pack of cards.  Believe me, I've wanted to, but every time I approach the card aisle at Target or Wal-Mart or even K-Mart, I just don't pull the trigger.  I think I'm having a severe case of card-aisle anxiety.  Not sure if they make any fancy meds with those oh-so-trendy sounding names (you know the kind I'm speaking of; usually they cause annoying side effects like dizziness, blurred vision, and/or prolonged and excessive blood flow to embarrassing quadrants of your body).

In any event, I'll be just fine.  Besides, I'll be more than ready to jump back into the pack ripping circus once 2013 Topps Update hits the shelves in the near future.  I received one of those Mastercard gift cards for my birthday a couple months back that I've set aside for a hobby box of the stuff.  I guess that's better than any pill-shaped tonic Pfizer or Bristol-Myers has put out recently, and without the painful urination that accompanies it.

[Hey Mark, what's with all the nasty bodily humor today?]

In the meantime, thanks to eBay, card shows, and trade packages, my itches have been sufficiently scratched over the past few weeks.  The latter of which means has been providing me with many great catches of late.

Late last week, a robust yellow envelope from Illinois arrived in my mailbox, as Dime Boxes Nick compiled a nice batch of loot from his trek to the National this summer.  A large portion of that cardboard bounty consisted of New York Mets cards from all eras.  The gold-encrusted Tom Seaver you see above is one of the many Metropolitan greats making the guest list.

Let's meet some more Mets, shall we?


Nimmo, New York's top draft choice from 2011, has one of the best Twitter handles in the land: @You_Found_Nimmo.  The Wyoming native spent this past season at Low-A Savannah where he batted .273 in 110 games.  We're still a few seasons away from finding Nimmo at Citi Field. 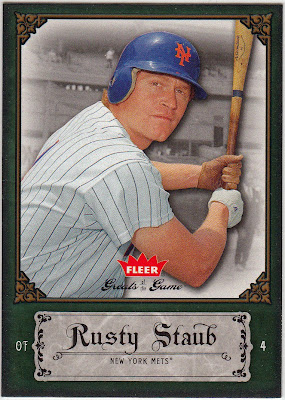 Fleer's 2006 "Greats of the Game" is one of the best retrospective sets around--in my opinion, of course.  I like this card so much, I'm toying with including it as Rusty's entry for the All-Time Mets Project.

Oh, and speaking of the ATMP, Nick hit a home run by netting three new pieces to my newest collecting project.


Travis d'Arnaud was one of the key pieces coming back from the Blue Jays in exchange for R.A. Dickey.  The former first-round pick of the Phillies, d'Arnaud broke his foot in the spring and didn't join the big club til mid-August.  He became New York's everyday catcher following the John Buck trade.  Supposedly a prospect with the bat, I was more impressed with his abilities behind the plate than I was with his offense (.202 AVG in 99 ABs).


Aahhh, beautiful '63 Topps!  As a rookie in 1962, Hickman played in 140 games for the original Amazin' Mets, swatting 13 homers and driving in 46 runs for the expansion club.  In six years in Flushing, Hickman compiled a .241 average with 60 homers.  Of his other three big-league stops, Hickman is probably most remembered for his All-Star campaign of 1970, when he posted a .315-32-115 stat line for the Cubs.  Not too shabby!


A sweet swing on a partly cloudy afternoon in the borough of Queens.  A rather picturesque entry in the 1970 Topps collection, wouldn't you say?  Pfeil played just two major league seasons, one of which was in 1969 for the Miracle Mets (he also played for the Phils in 1971).  The Passaic, NJ native split time at third base, second base and outfield over 62 games for the '69 world champions.

A great assortment of Mets names from the very beginning of the franchise through the recently completed season.  I'd expect nothing less from Nick, who is the king of the discount boxes (in case you've been living under a rock and didn't know!).

And, as a postscript to the Orange and Blue collage above, let me share a few of the non-Mets player collection gains that also made their way into Nick's recent bundle.

Some of the main food groups are represented here... 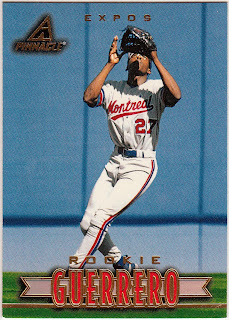 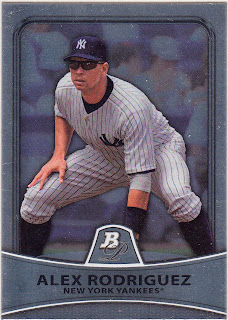 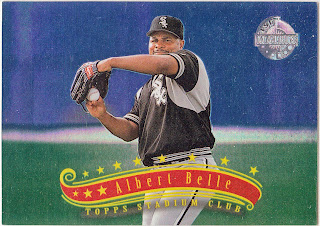 I'm especially fond of that Matrix parallel from '97 TSC of the ferocious Albert Belle.  And, yes, I still enjoy getting cards of A-Rod!

A big-time hat tip to you, Nick, for an awesome assortment!  I'll surely be on the lookout for some more Frankenset needs for ya at my next card show cameo.