Thursday was the day I grabbed a 2013 Topps Update hobby box on my way home from work.  I was anxious but, as always, ready to be let down.  After all, I pulled a Mike Schmidt auto/relic from the Series 2 hobby box I opened over the summer, so it would be unfair and impractical of me to expect greatness from this box.

I'll get into the various inserts, parallels and, yes, relic that came in this box (its nothing earth shattering, I assure you), but the majority of my eagerness stemmed from getting at the new Mets cards.  In my last post I gave a rundown of the Mets cards one should expect to come across.  Of the nine, I got eight, so that's pretty decent I suppose.

The best of the bunch? 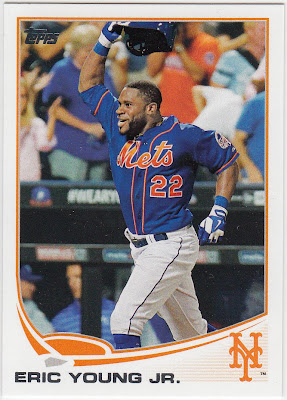 I was a bit worried that Topps would goof up the card of one of my new favorite Mets.  Not only did they avoid a pratfall, but they hit a bulls-eye with EY Jr.'s card.  Dare I say, this card made up for some of the minor gripes I have with this year's product and the hobby box I lucked into.  Oh, and since this copy of the card goes towards the complete Update set, I'll be looking for another one of these at the next card show for my All-Time Mets Project. 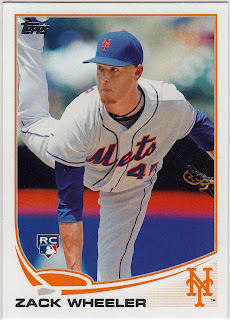 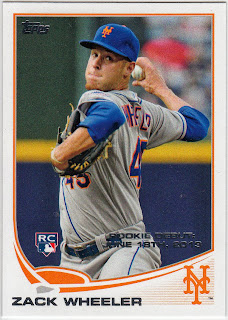 On the left, Zack Wheeler's rookie card [Ed. Note: Which was a little bent int he top left corner, might I add. Grrrrr.] and his 'Rookie Debut' card on the right.  I wish they had used the photo from his debut on his normal rookie issue. 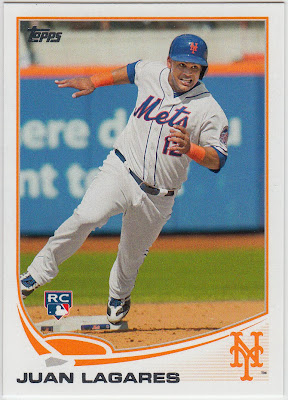 While I might've opted for an outfield action shot of Juan Lagares if I were Topps, this is a pretty cool photo. Lagares is a Gold Glove-caliber defender in center field, but he's also a hustler on the bases, too.  So, I can't really complain about this card. 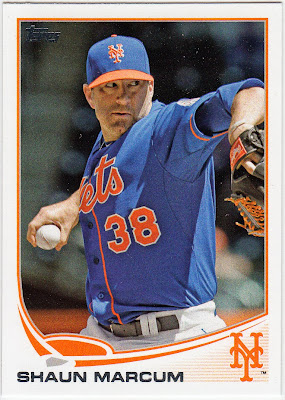 I can excuse Topps for including Marcum in it's Bowman base set, since that thing comes out in, like, February.  But there is no excuse for this guy being in Update.  Especially after it was announced he'd need season-ending shoulder surgery on July 9.  And, yes, he was a woeful 1-10 prior to that.  Sigh. 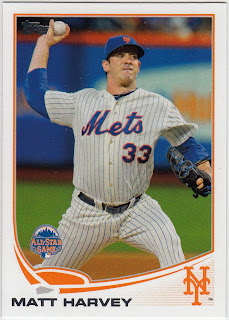 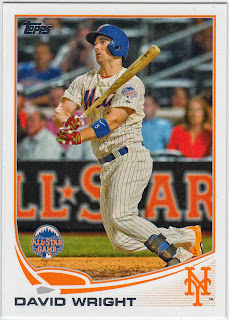 The two Mets All-Stars.  I like how Topps went simple and unobtrusive with the All-Star Game shield, but how about using the respective league logo (NL or AL) instead of the team logo?  It is an All-Star card, after all. 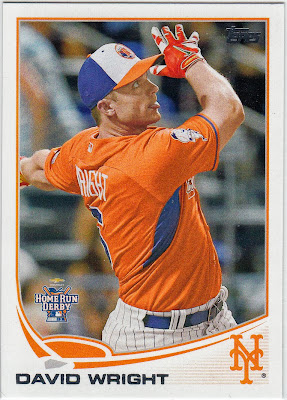 I'd rather have a Josh Satin or Jenry Mejia card than this.  I love David Wright, don't get me wrong, but Home Run Derby cards are pimples on the checklist, in my opinion.  Don't need 'em.

So that's eight of the nine Mets cards from this year's Update.  The one card I didn't get?  Well, I actually did get it, but not really... 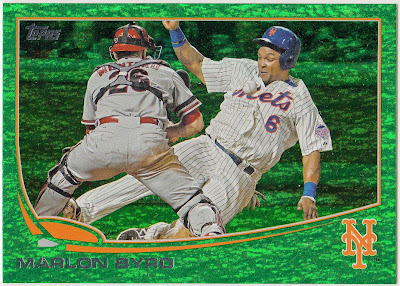 Seeing as this will be Marlon Bryd's one and only Mets card, I'm pretty stoked about the photo choice.  Heck, the ball is still in the process of arriving to Miguel Montero in this picture!  I guess I could use this ecto-green emerald parallel for the ATMP, but I'd prefer the regular card.  Still, I thought it was pretty good fortune to get this one of Marlon because it's such a neat photo.

If I had to grade Topps performance with the Mets portion of the checklist, I'd give them a 6.5 out of 10, which is a passing grade.

How did Topps do by your favorite team?