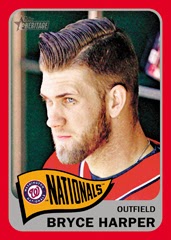 One of the most anticipated Heritage releases in recent memory is scheduled to hit hobby shelves next Wednesday.  I've been so busy with the little guy and some extended work hours -- among other things -- that the release date has kinda snuck up on me.

But, thanks to the wondrous blog world, I caught a much needed reminder when I happened upon the blog of The Topps Baseball Fanatic earlier today.  And, much to my excitement, he brought news of the checklist going live.

I'm going to provide a little commentary and my initial thoughts on the checklist and so forth, but if you'd rather skip that and just scope out the checklist, be my guest!

Okay, so my first task was to jump directly to the 75-card short print portion of the checklist, because this is the area that causes me and the rest of the set collectors a great deal of grief.

As was the case in 2013, this year's Heritage set has overloaded the SP checklist with a vulgar amount of the game's most sought after names.  For starters, the hottest young players such as Puig (shocking!), Jose Fernandez, Matt Harvey, Wil Myers, Yu Darvish, and Stephen Strasburg can be found here, as well as established stars like Cabrera, Votto, Jeter, Verlander, Cano, and Felix Hernandez.

But, in the interest of fairness, I will point out that Mike Trout and Bryce Harper are not SPs this year, nor is my boy David Wright, who was a short print each of the last three years.  Zack Wheeler, Yoenis Cespedes, Clayton Kershaw, Michael Wacha, and Andrew McCutchen are also in the regular 425-card non-SP base set.  All easily could have been made SPs, further driving us all into madness.  I guess I have to concede that Topps did a pretty fair job this year, even more so than last.

-- Chris Davis finally made the 500-card Heritage set!  The last two years he was only included in the High Numbers box set.  Way to go, Crush!

-- New Age Performers, Then & Now, and Flashbacks have returned as insert series.

-- Blue, Red and Black bordered parallels are back (YES!).

Those are just a few of my initial thoughts and observations.  I haven't had a chance to digest the whole thing yet.  Plus I'm too giddy to process and recite much more than this.

But, all gripes aside, I'm geeked out of my mind to get my hands on the new cards.  I think the '65 set is one of the true home runs from Topps' history of card designs, and I know many of you folks reading this likely agree.

Whereas last year I bought a hobby box, I think my plan of attack this year is to just buy a truckload of the 3-pack blister packages from Target.  You know, the ones that have the three black variants as a bonus.  For the price of a hobby box, I figure I can snag about six or seven or eight of them.  For me, the black bordered cards are of greater interest than the photo variations or jersey cards that I'd otherwise get in a hobby box.  Plus, you can still score autos and relics in retail packs.

Of course, I reserve the right to change my mind regarding this plan, but that's where I'm at right now.

The release of Heritage is always a special occasion during the baseball card calendar, and this year's edition looks like it'll meet and exceed the excitement levels from any prior year.