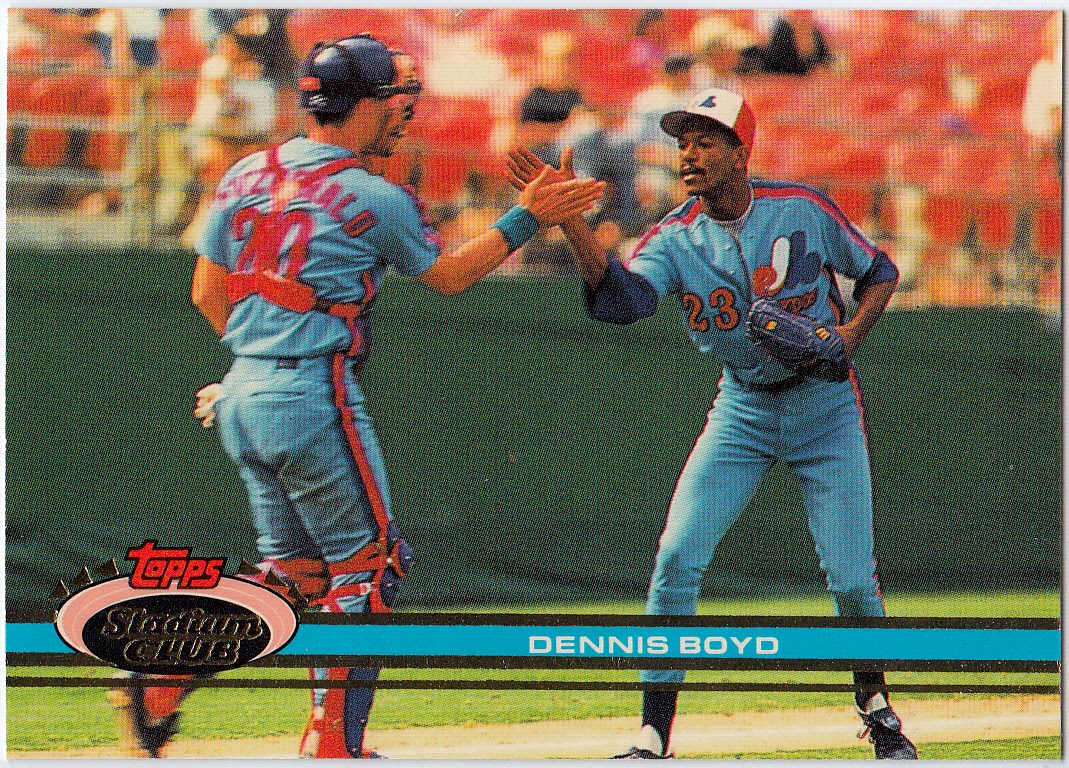 About a week or so back, I scored what was probably one of the best value deals I've come across on eBay since I've been buying cards on the world's most favorite online auction site. 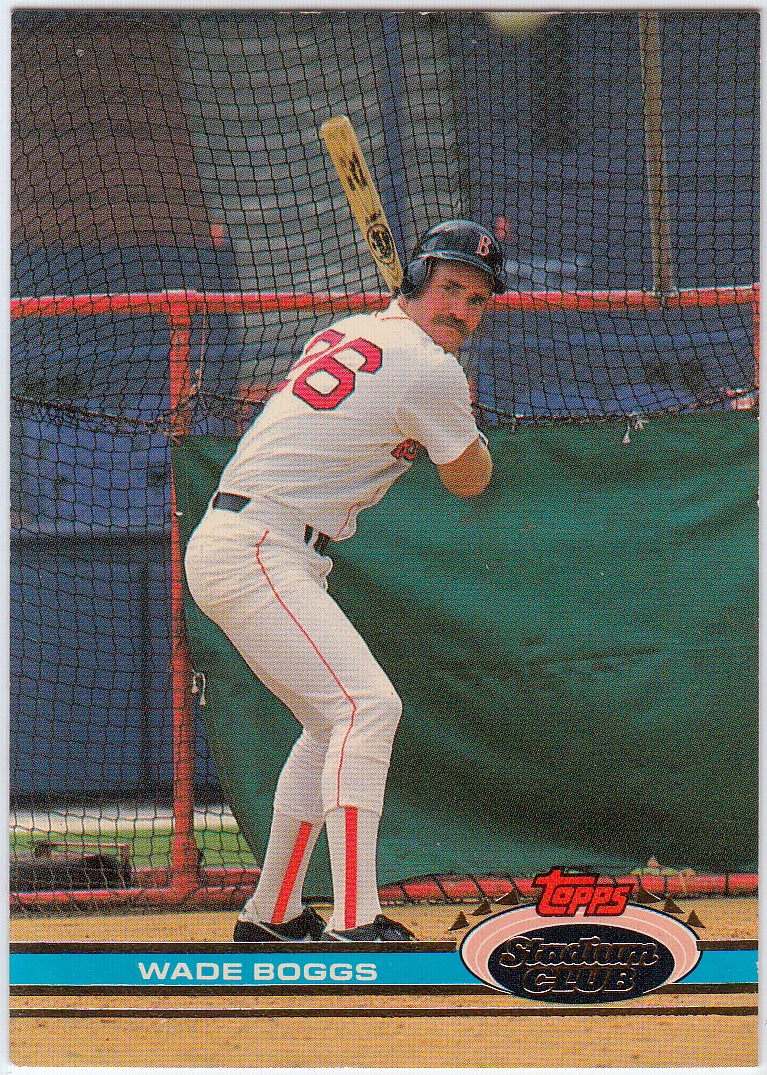 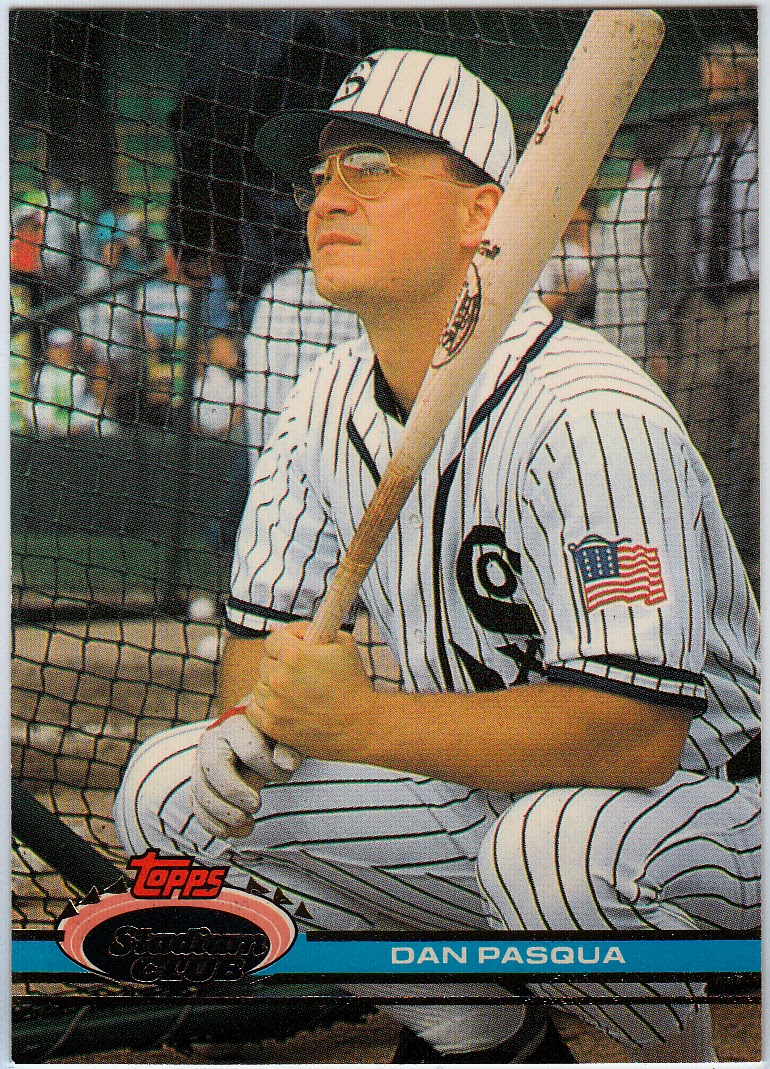 So, for approximately $25 shipped, I got two complete baseball sets housed in pages and binders.  I was extremely happy, to say the least.  The '91 TSC set is one that I've been eyeing for quite a long time, so that was a no-brainer.  But, when I saw the '99 Fleer Tradition set, I was very intrigued.  I had seen quite a few samples of the set through the years, but never considered rounding up a set.  This made the decision easy. Previously I had been wary of such auction types, because I figured the binders and/or pages would be junk or the packaging of one or more albums in a single box would result in a catastrophe if done in a slipshod manner. What can I say, I always assume the worst!

But, this seller hit a home run in every way possible.  The cards were all in great shape, the albums and pages were in fine (if not new) condition, and it was packaged and shipped with the utmost care. 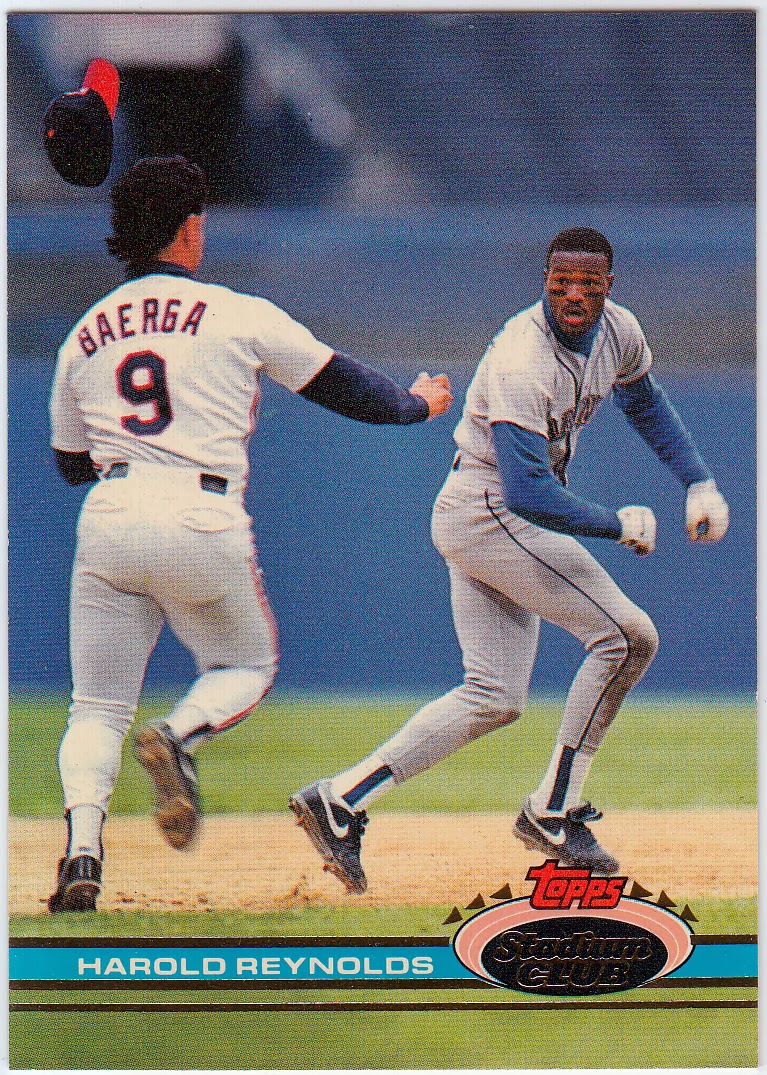 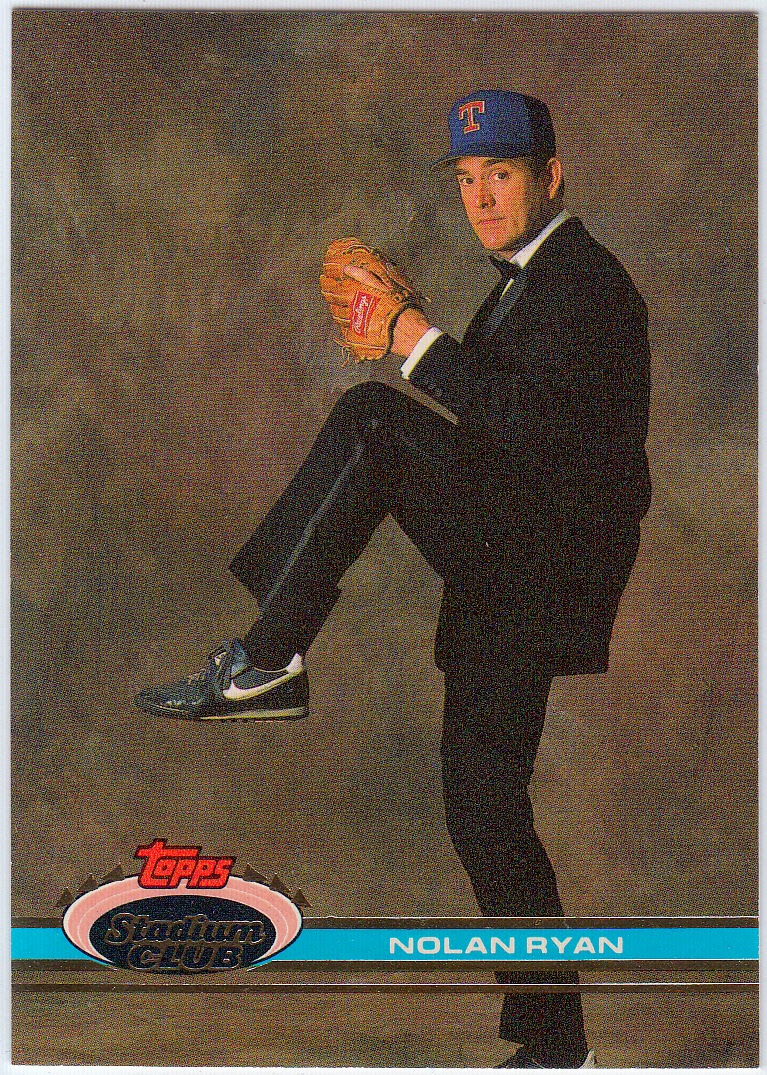 So, now I have these two beautiful sets, both of which place a premium on stunning photograph and off-the-wall action.  And I couldn't be more pleased with both.

Of course, as most of you know, 1991 was the debut year of Stadium Club.  I can still remember the first time I saw the Stadium Club brand in the store (I think it was K-Mart), but it was the football set.  Different sport, yes, but identical design.  I was only 11, so of course I had to ask dad to buy me a pack or two. 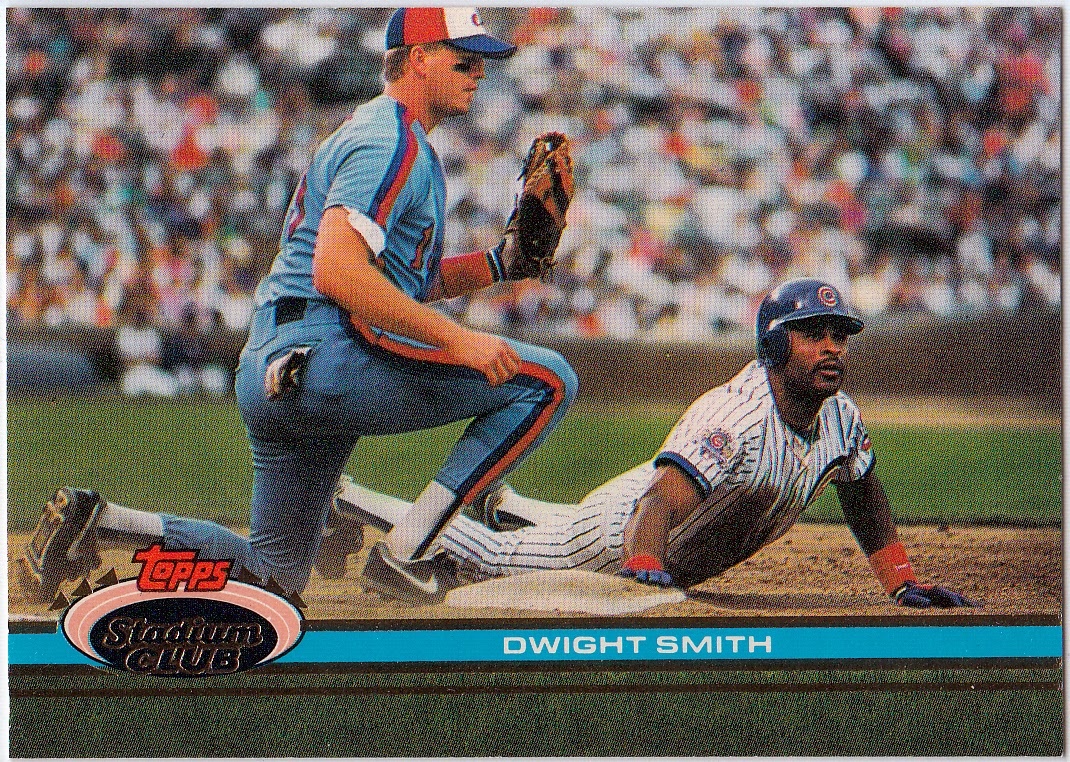 The thing that struck me immediately about these cards was seeing the Kodak brandmark on the package and thinking, What are these things?  Surely they can't be regular Topps cards, right?!  They didn't look like any cards I had ever seen: no borders, full bleed pictures, super glossy, etc. 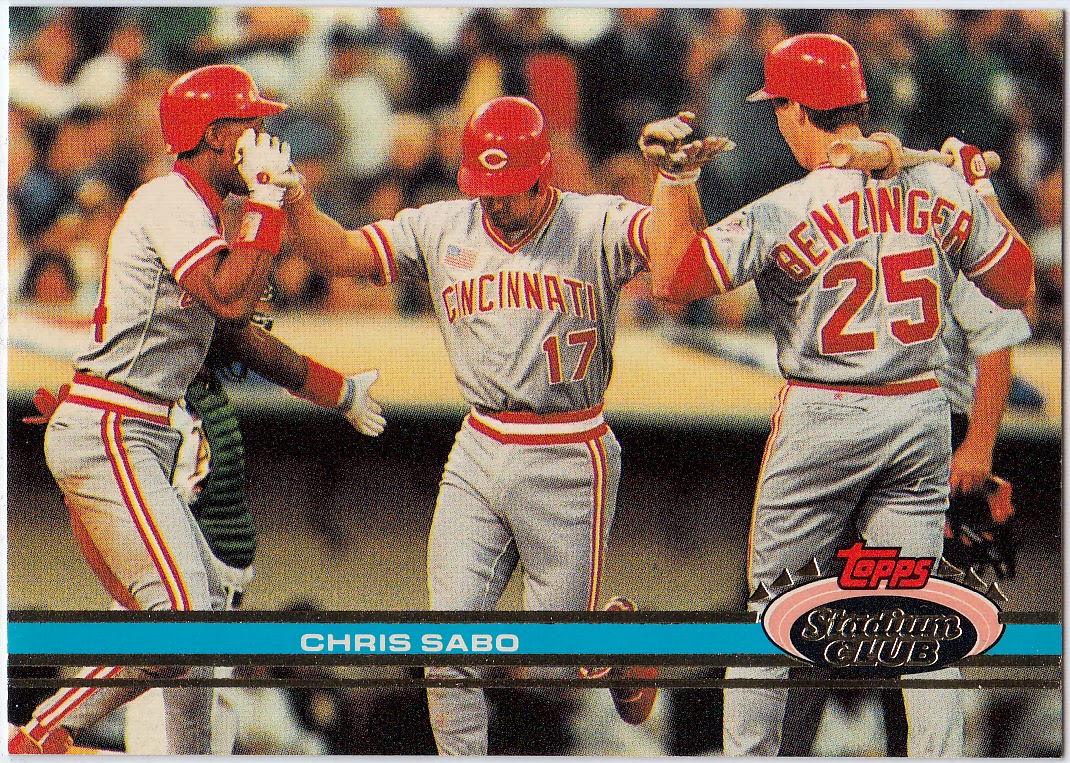 Pretty revolutionary stuff, especially since we had all been raised on, well, cardboard trading cards our whole lives up til that point.  Sure, Upper Deck came along in '89 and raised the bar, but Topps pretty much obliterated that bar with Stadium Club.  As far as I'm concerned, all other premium cards since then and those yet to come will be measured against Stadium Club. 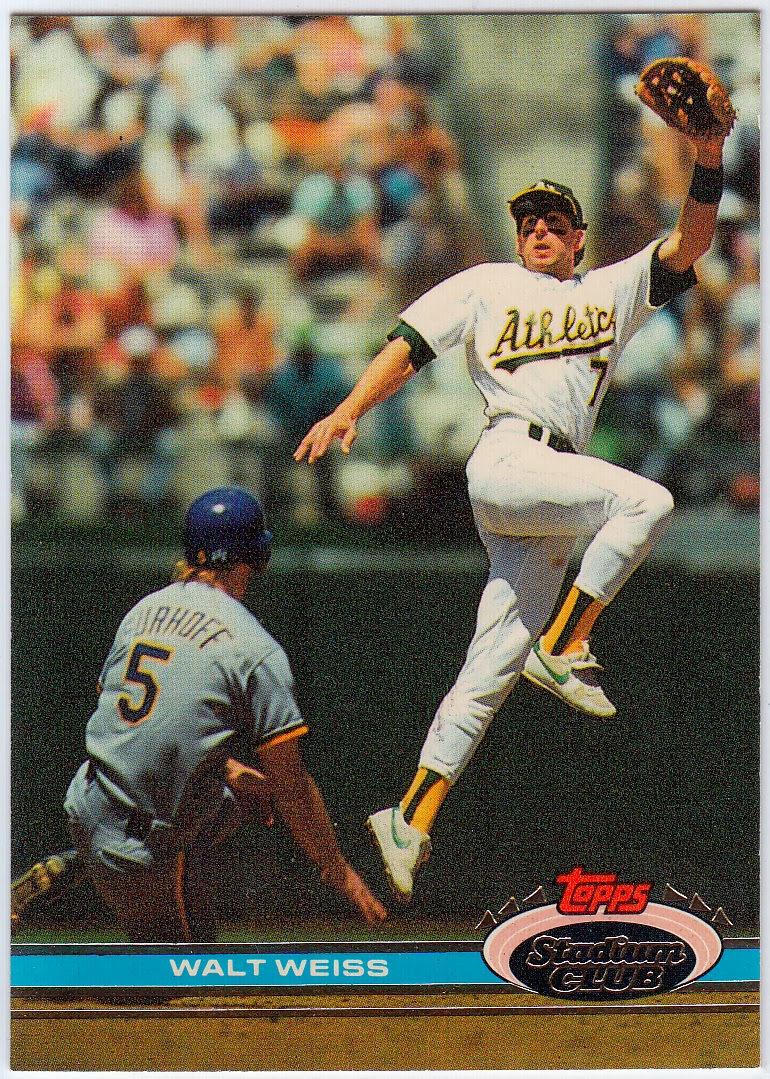 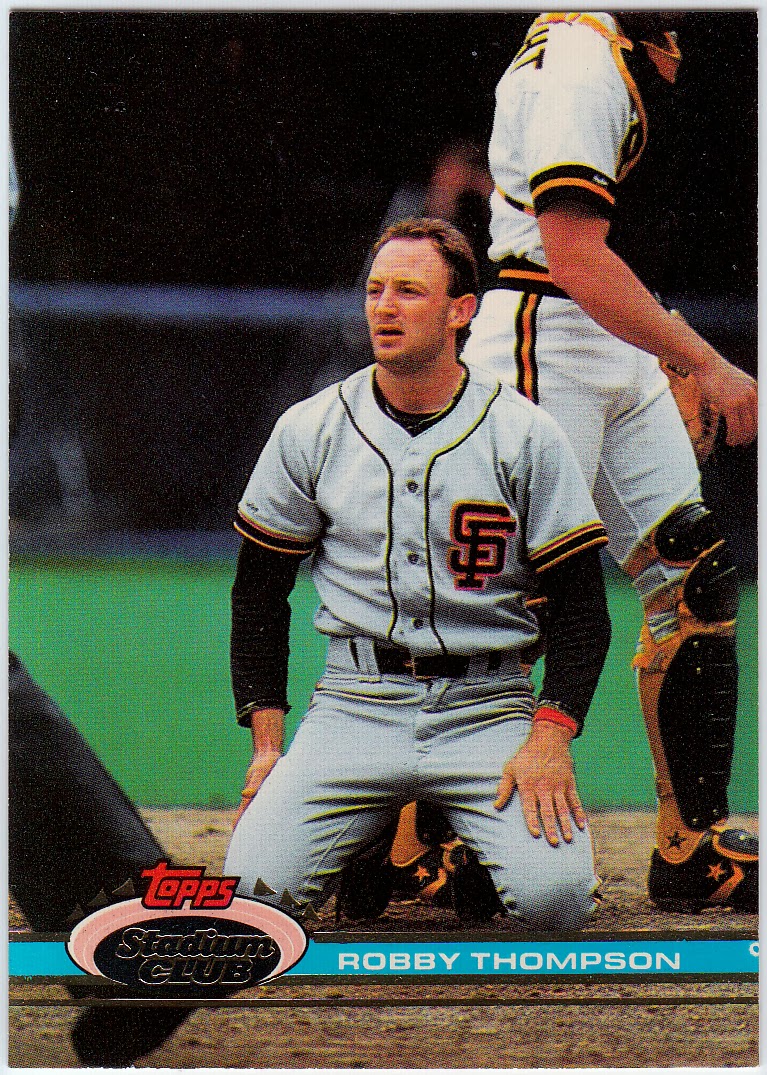 And the '91 set begin it all, making it an essential part to my collection as a Topps guy.  At 600 cards, it's a pretty thorough collection of player cards.  Not quite as sprawling as the three subsequent years' sets, but definitely not a shy offering. 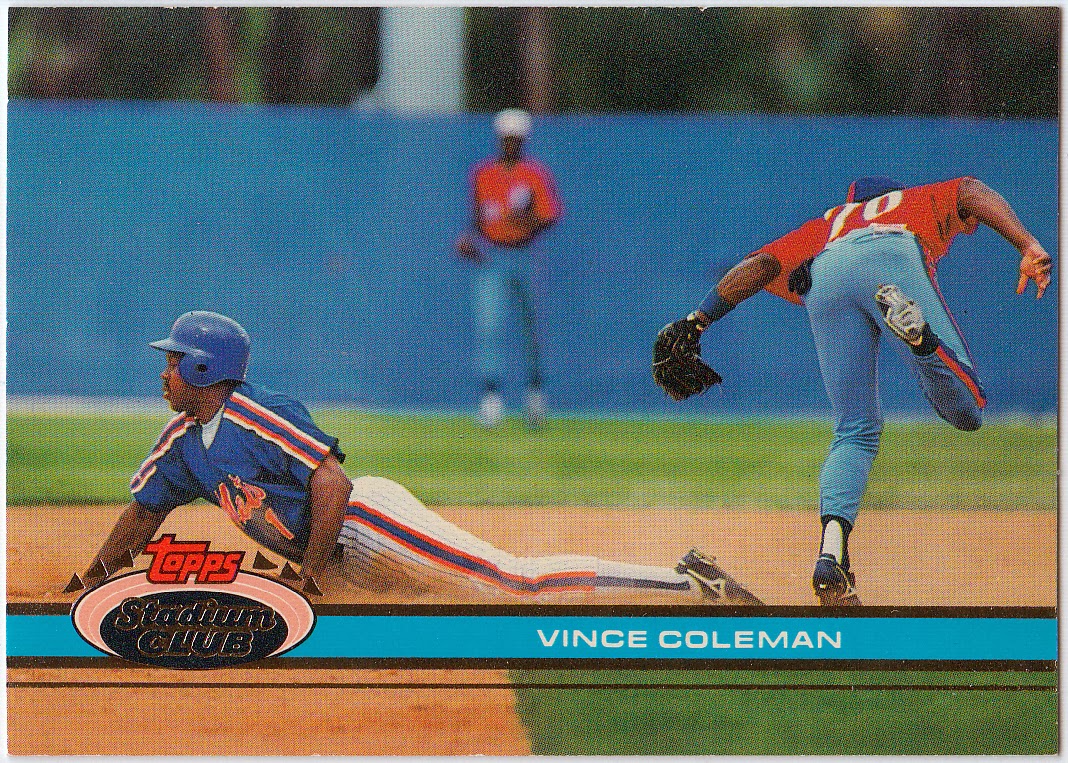 Of course, the '91 set is loaded with the superstars of the day and also a few essential rookies, such as Jeff Bagwell, Mo Vaughn, and Chuck Knoblauch.  But the thing that makes TSC special is that even a backup catcher or long reliever can have the most breathtaking card on any given album page. 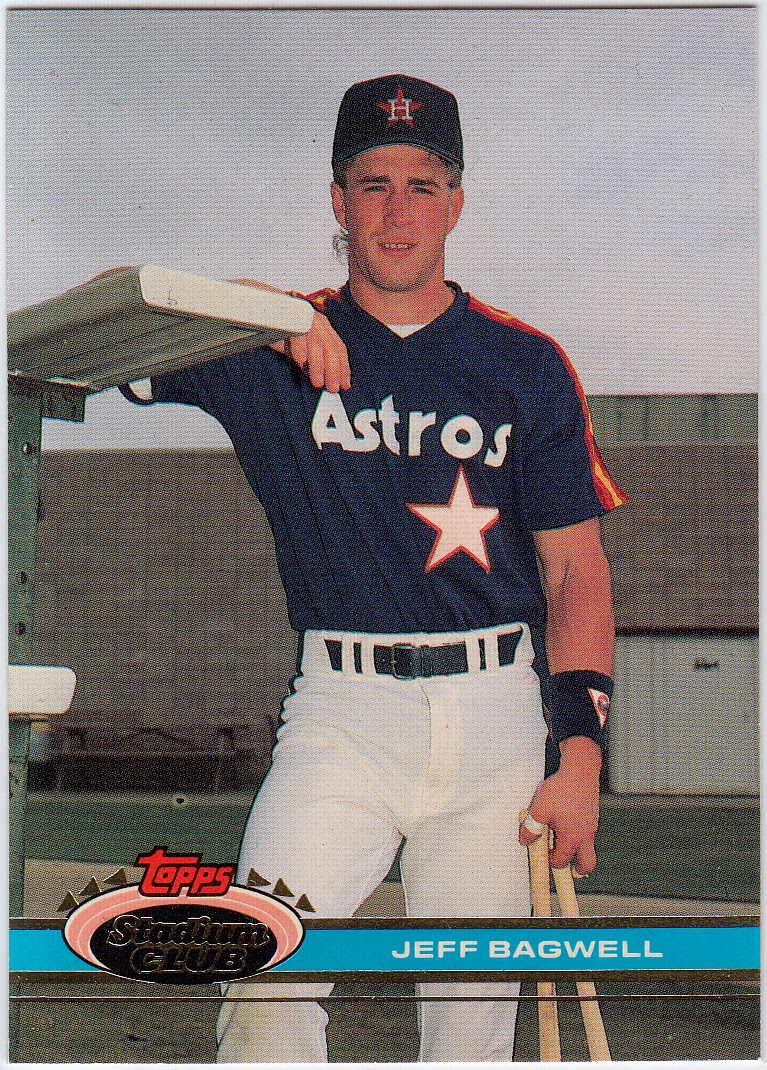 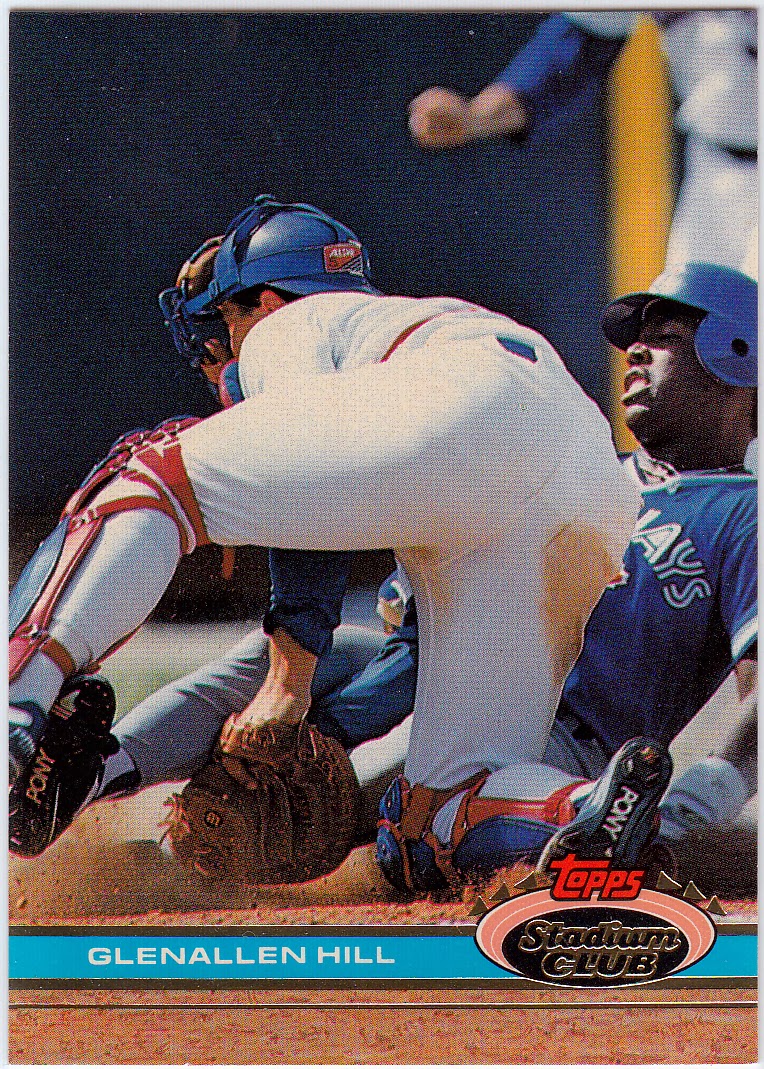 It's a damn shame that the brand was phased out by Topps, considering they annually produce 358 different trading card sets, plus poker chips, mini figures, cubezzz, and all that other jazz that no one really is interested in.  I'd gladly see them trade in about a dozen of these weird, unethusiastic projects to resurrect Stadium Club. 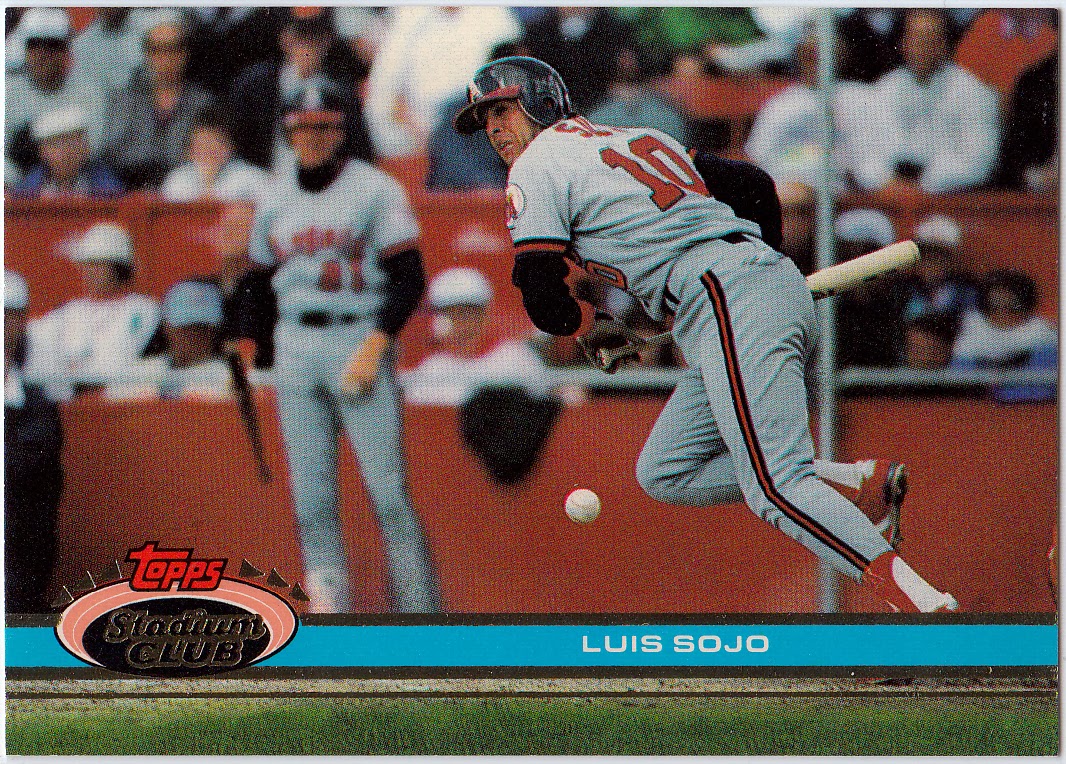 But, til then, there are many years worth of Stadium Club cards for fans like myself to track down.  I'm still in the throes of completing the 1997 edition, and that's kept me plenty occupied (and frustrated) for the past year-plus. So, there's still plenty of fantastic TSC cards to discover, I suppose.

It would be tough to choose an absolute favorite card from Stadium Club '91, but if forced to do so, I think I could do a lot worse than this one: 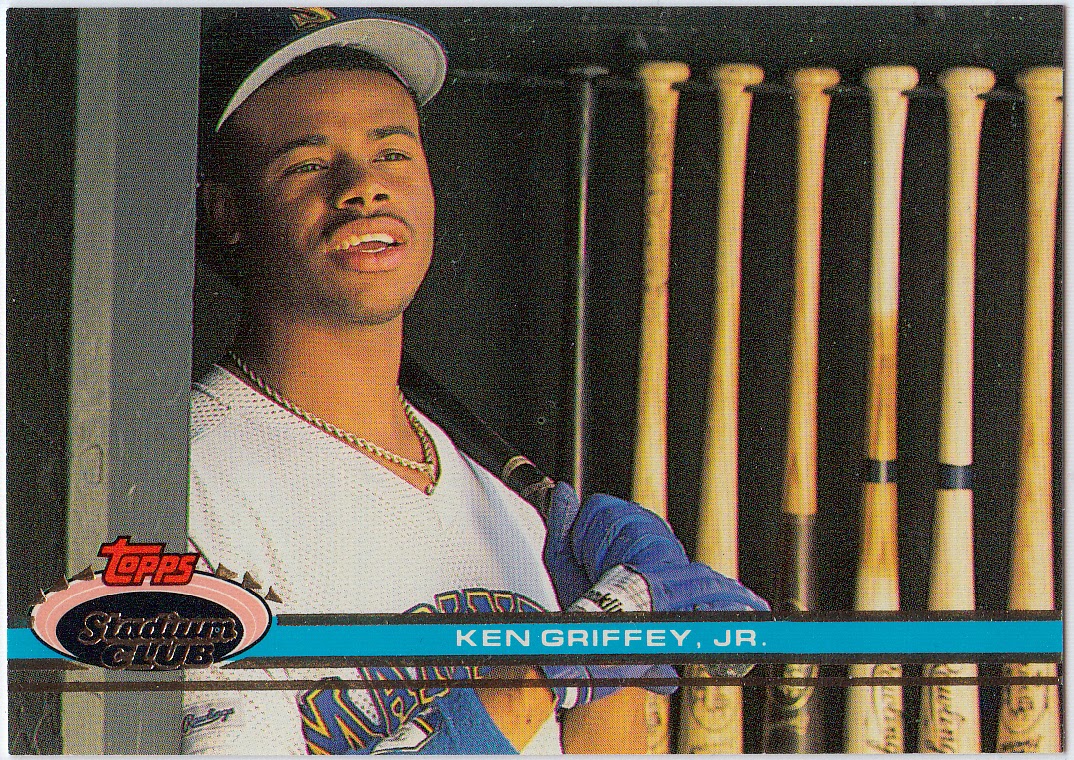 I know Junior was kinda the Upper Deck poster boy, but this is such a unique portrait shot of the game's up-and-coming megastar of the early '90s.  Sometimes you feel like a horizontally oriented card has way too much wasted space, but in this case I think it's way cool and way necessary for us to see the bat rack.  If nothing else, Griffey's card is the truest emblem of Stadium Club's artistic bent and playful personality.

In my next post, I'll take a tour through the '99 Fleer Tradition set.  Perhaps not as game-changing as Stadium Club, but nonetheless memorable and exciting.