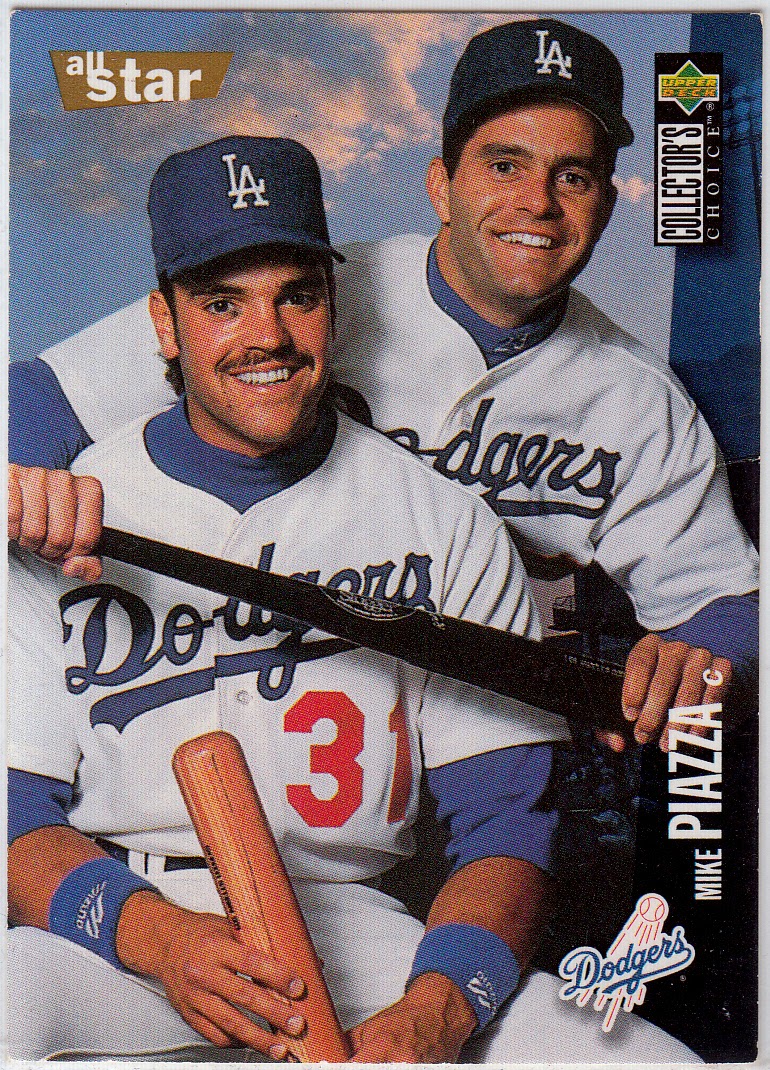 It's Friday night and the weekend's here, so what better time for a Piazza Party?

One of the blogosphere's all-time great Mike Piazza collectors once again graced me with a most amazin' assortment of Piazza cards towards my collection.  Joe M. of The Sandlot is nearing 900 unique cards of the should-be Hall of Famer.  And, thanks to a recent package he sent me, I'm two Piazzas shy of the 300 mark.

Let's take a gander at the career-spanning array of Piazza cards that are now part of my collection.  The '96 Collector's Choice above is maybe my favorite of the bunch, simply because it features another guy I collect, Eric Karros.

But there's plenty more where that came from... 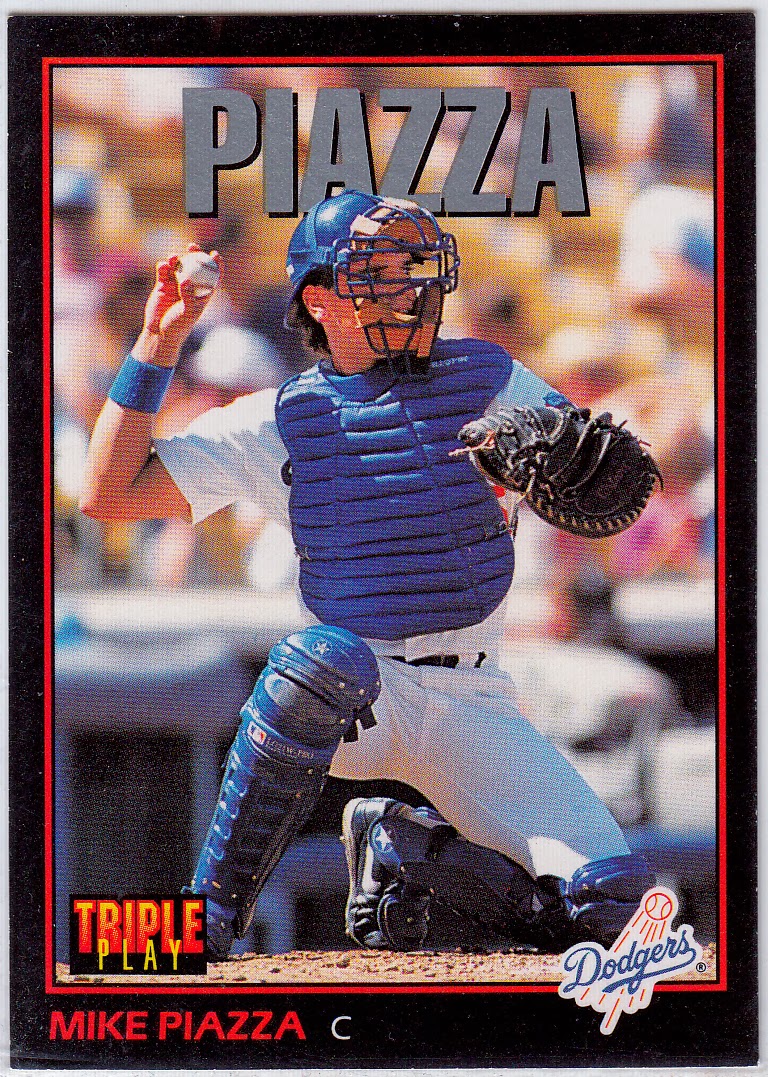 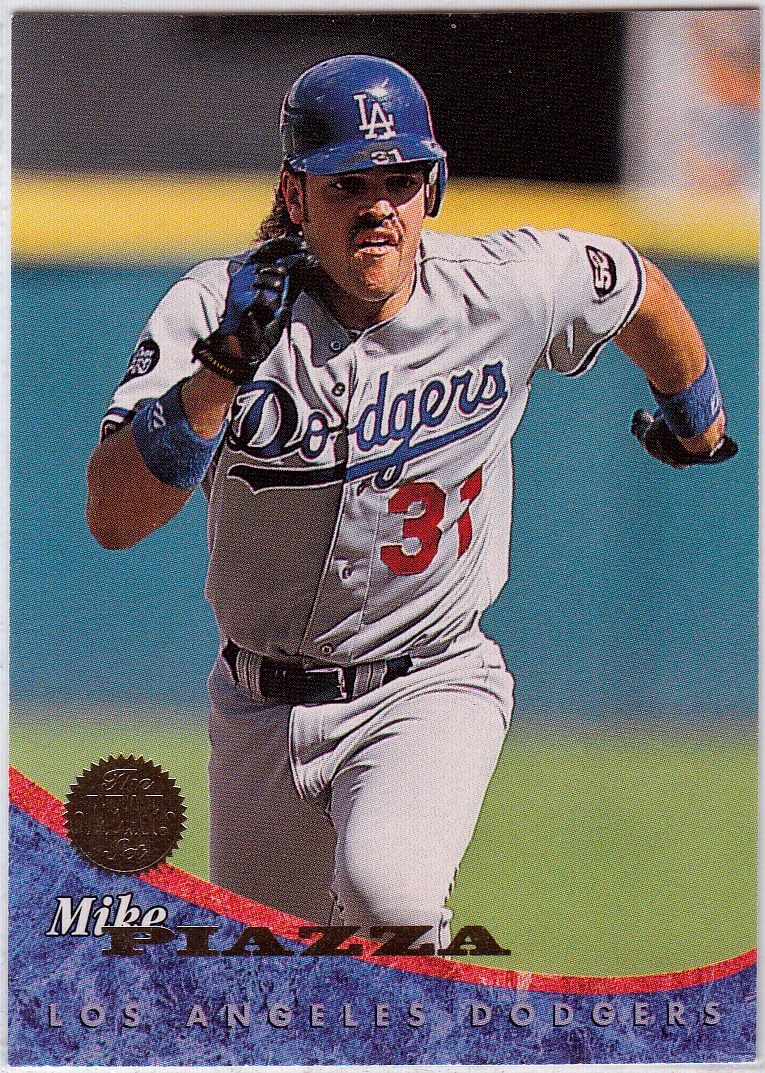 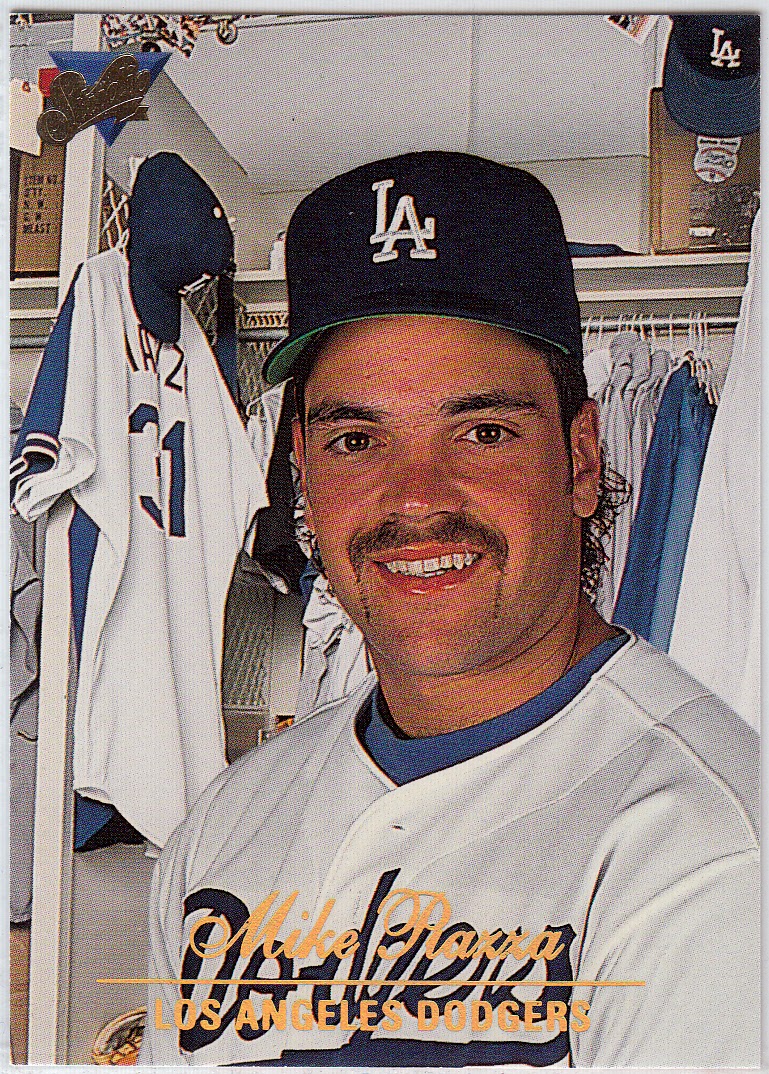 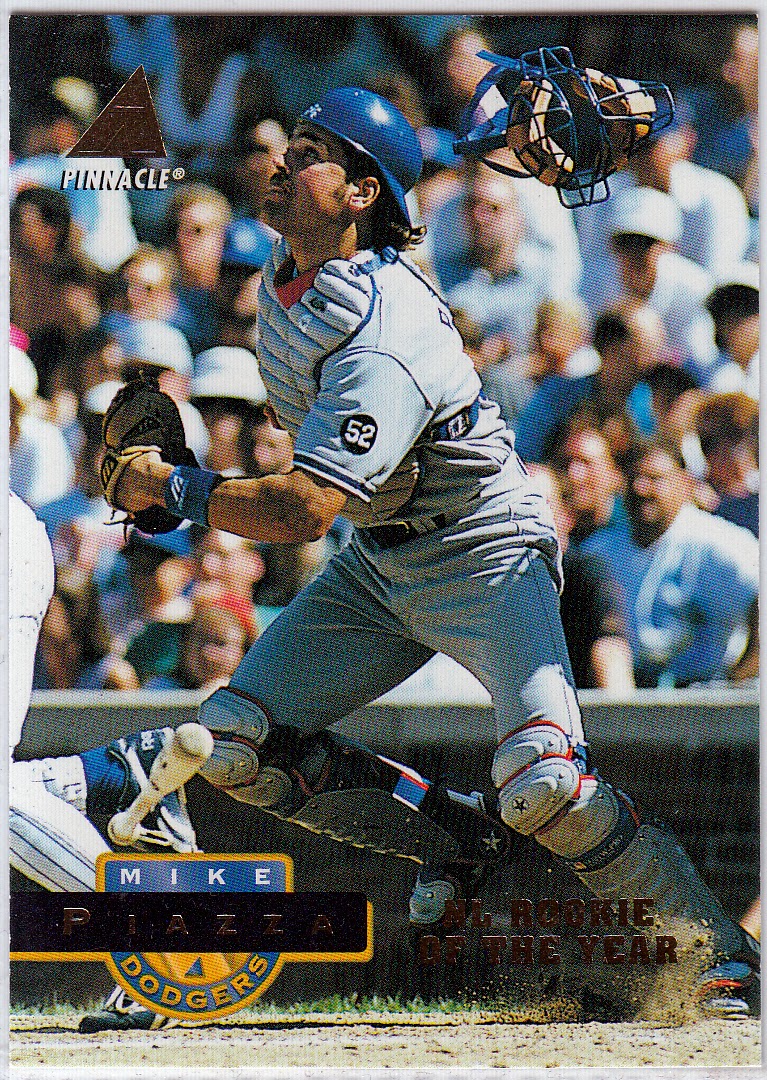 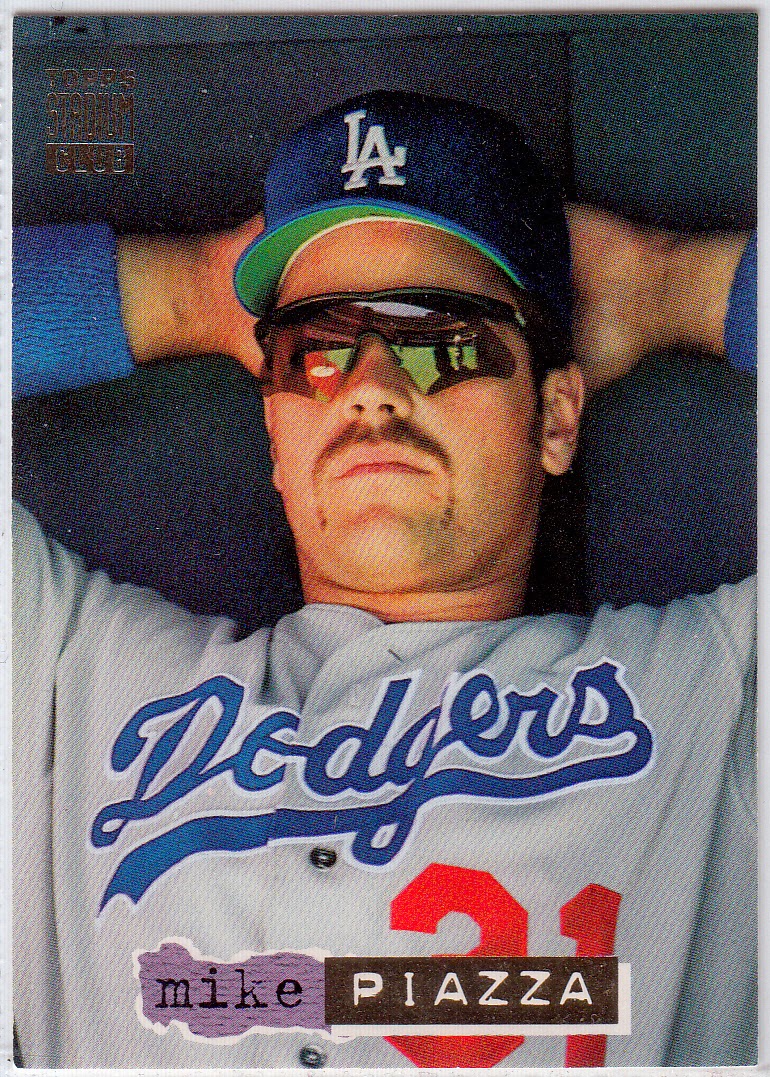 Two more from 1994.  The Pinnacle "NL Rookie of the Year" card features a most outstanding action shot, while Mike is just chillin' on the TSC Dugout Dirt card. 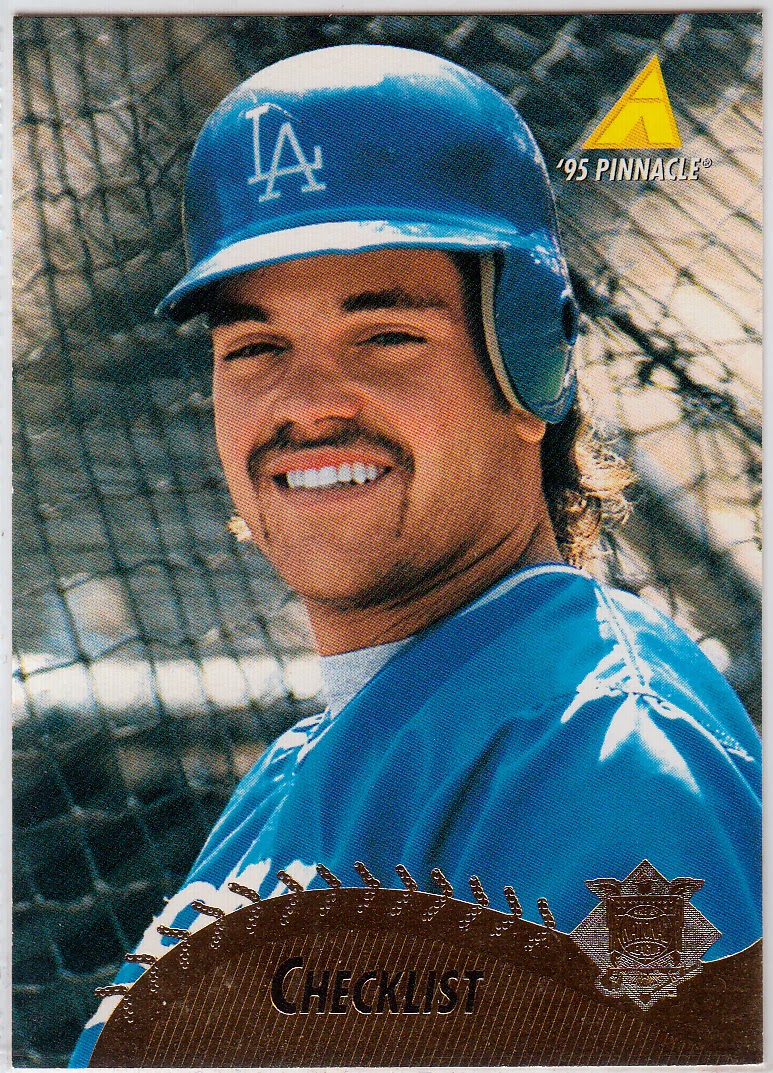 Back in the day, Pinnacle did checklists that were just as nice as the base cards.  Such was the case with this '95 NL checklist. 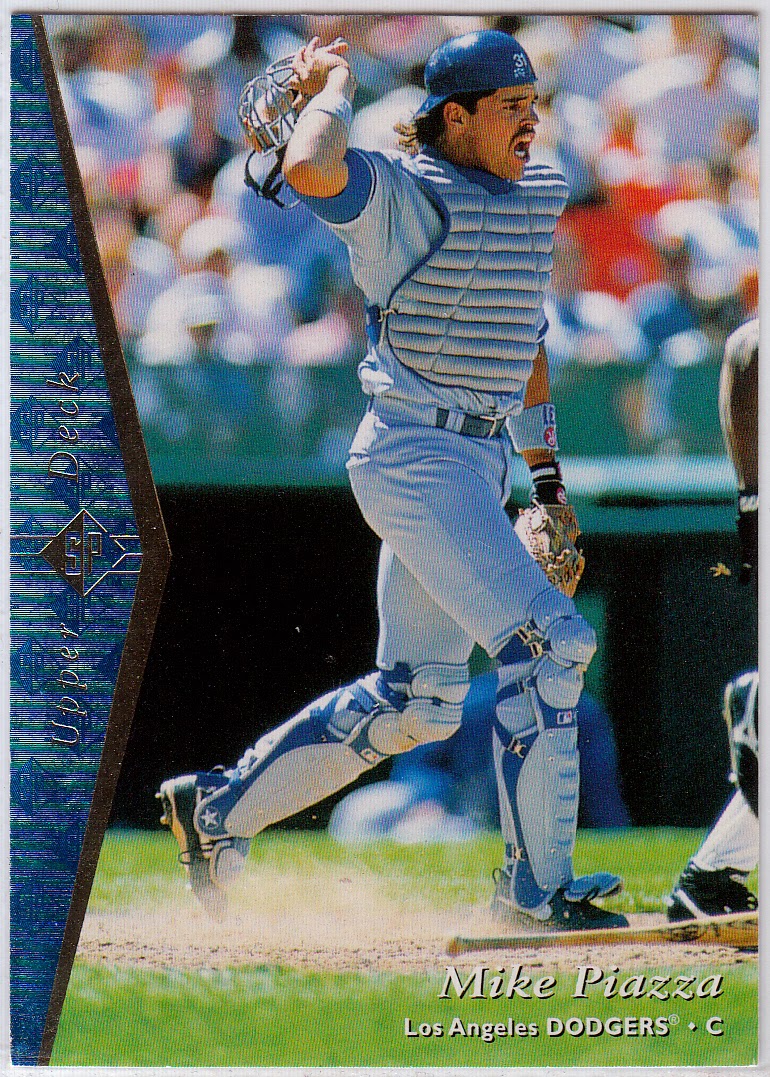 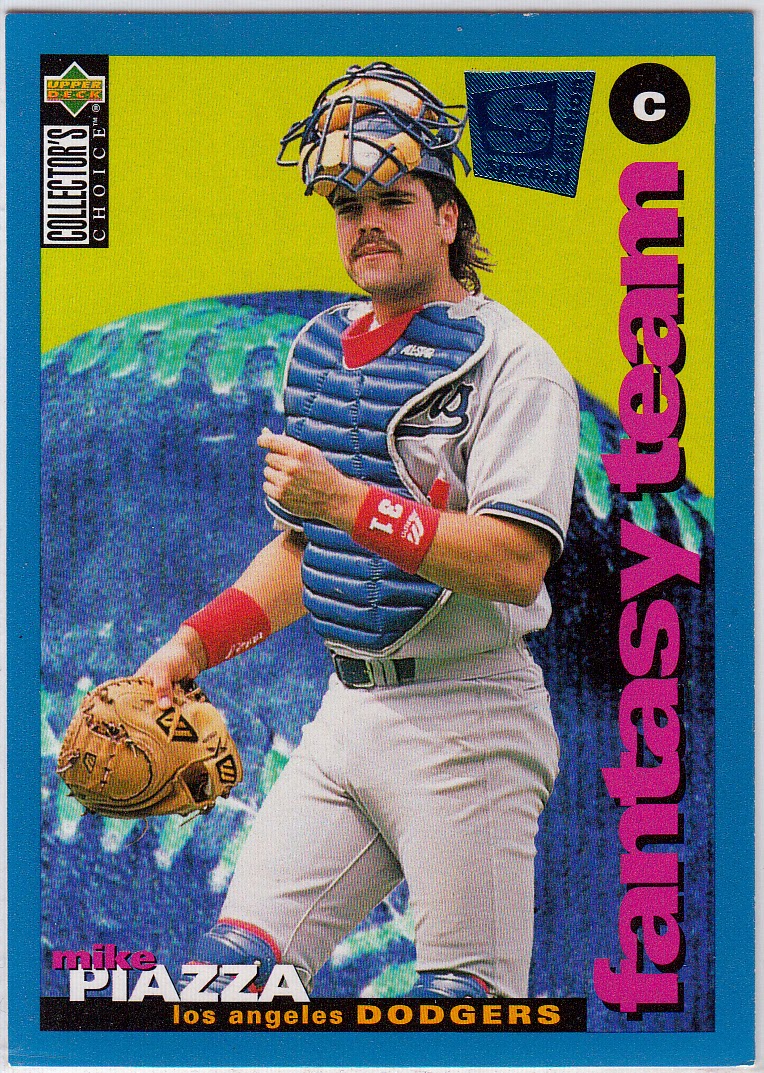 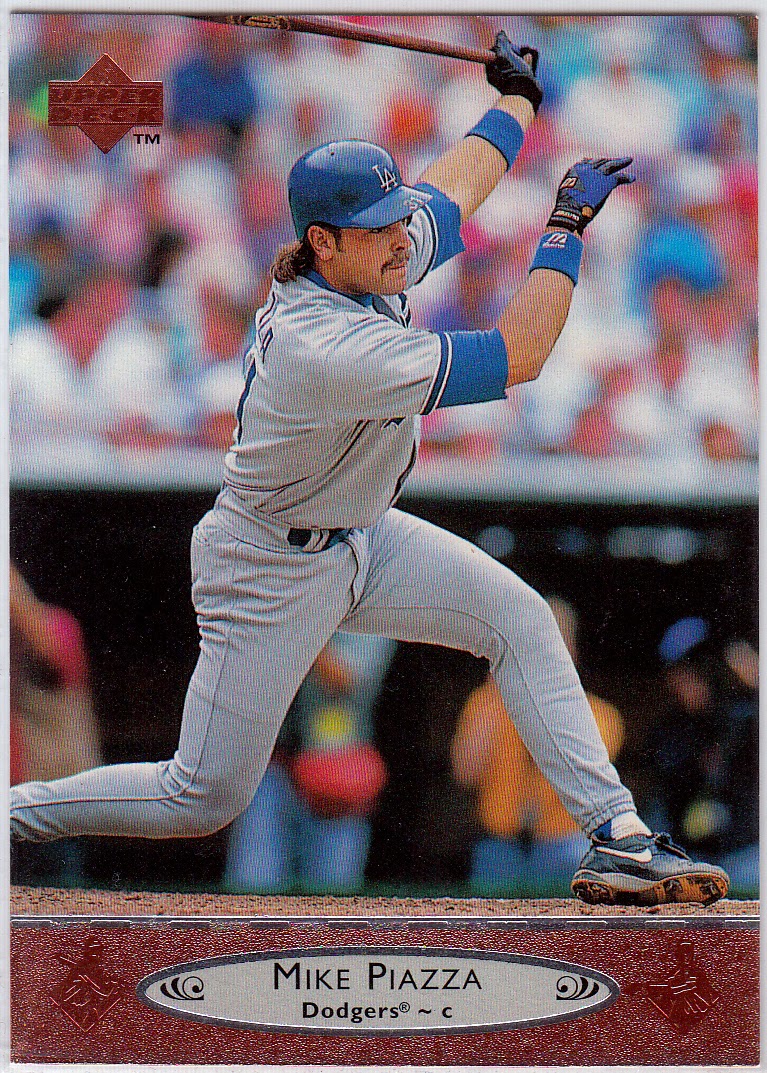 Lots to like about 1996 Upper Deck's base design.  Very classy.  At least I think so. 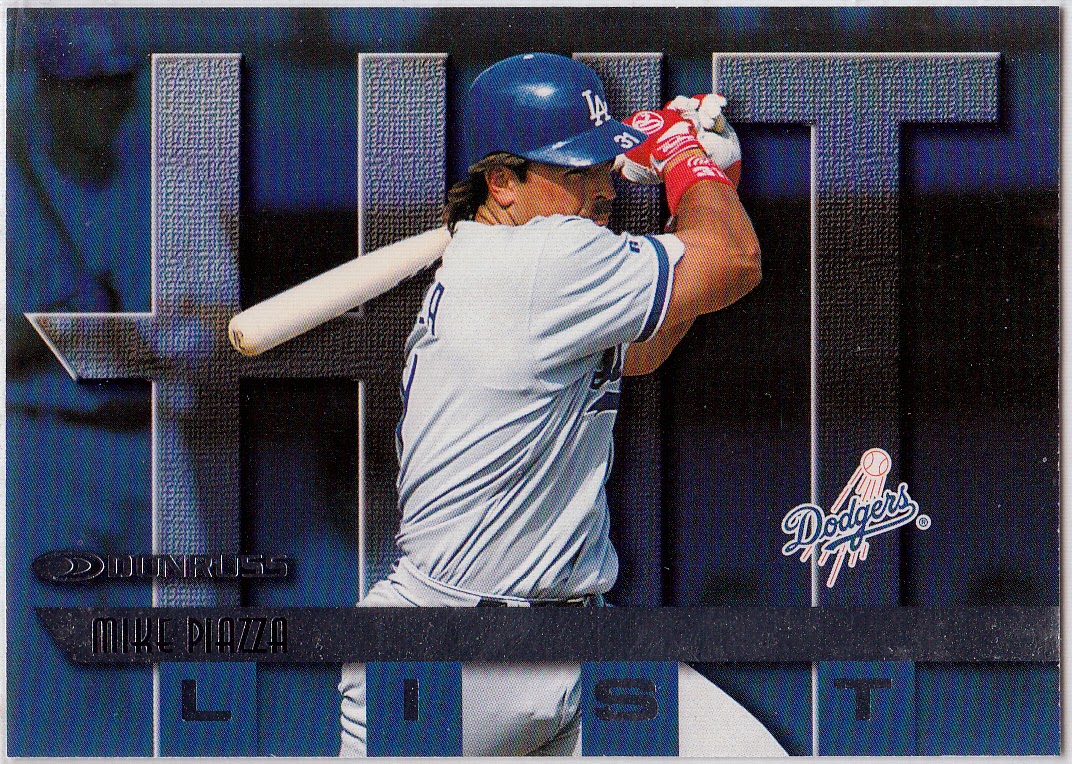 The back of this '97 Doruss Hit List card informs us that Piazza finished fourth among major leaguers in BA in 1996 (.326). 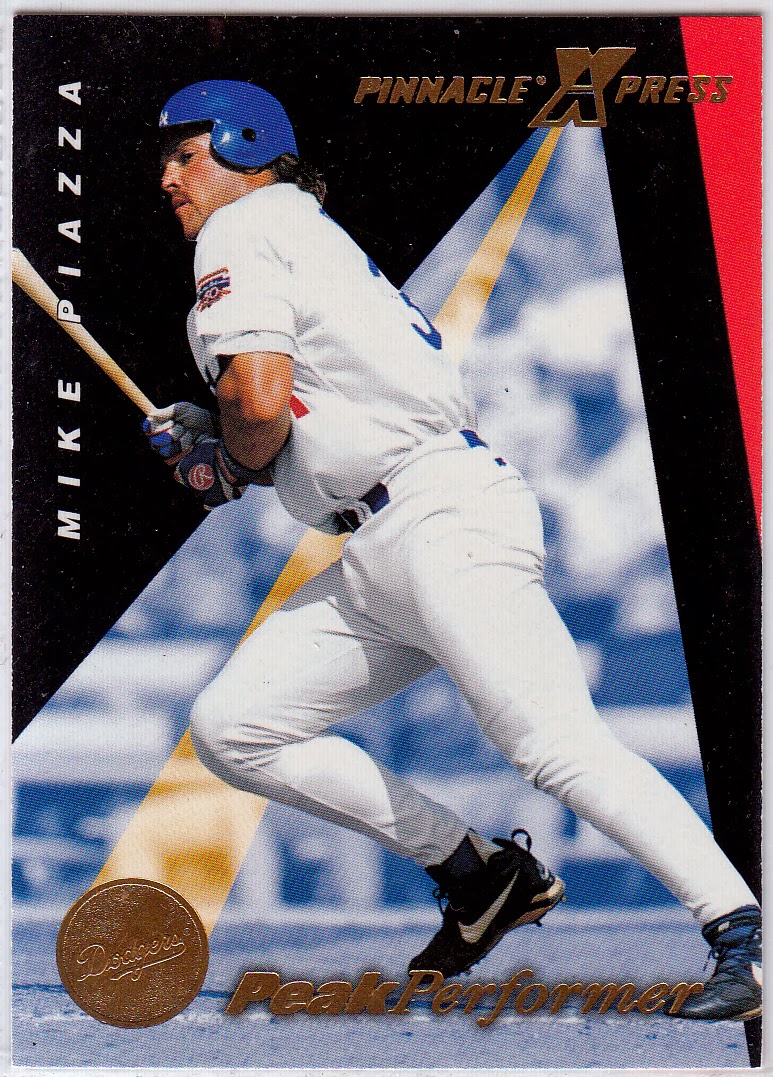 Lots of stuff happening on this one from 1997 Pinnacle Xpress.  I like how the "X" doubles as a spotlight.  And, apparently, it's also a laser that can shoot a gold embossed Dodgers emblem.  Rad! 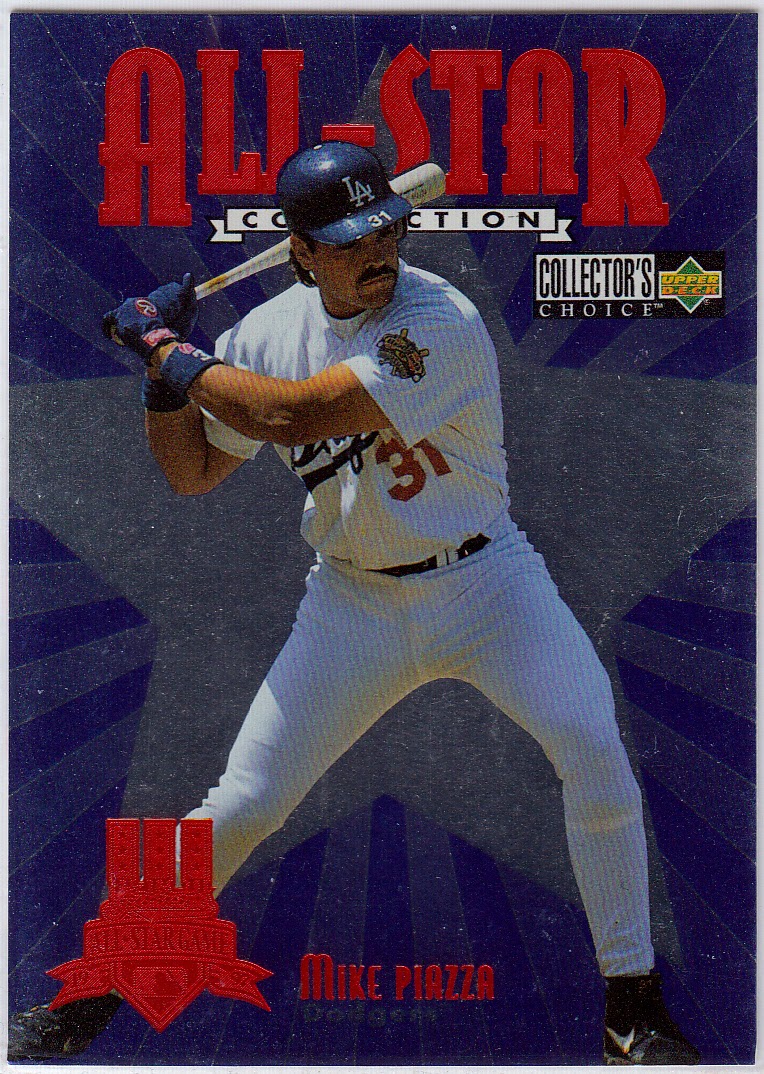 Mike turned the 1996 All-Star Game at Philadelphia's Veterans Stadium into a triumphant homecoming.  A native of the Philly burbs, Piazza homered and had an RBI double in the NL's 6-0 victory, earning him MVP honors.  These two '97 cards -- from Topps and Collector's Choice -- both celebrate his All-Star heroics. 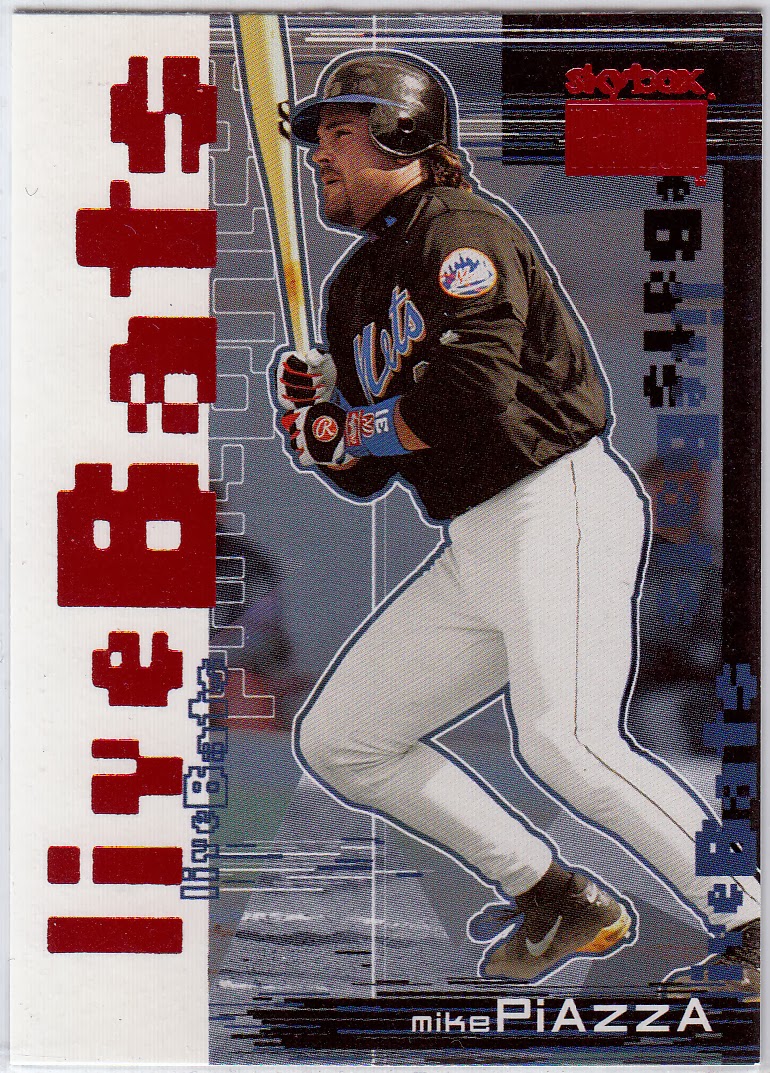 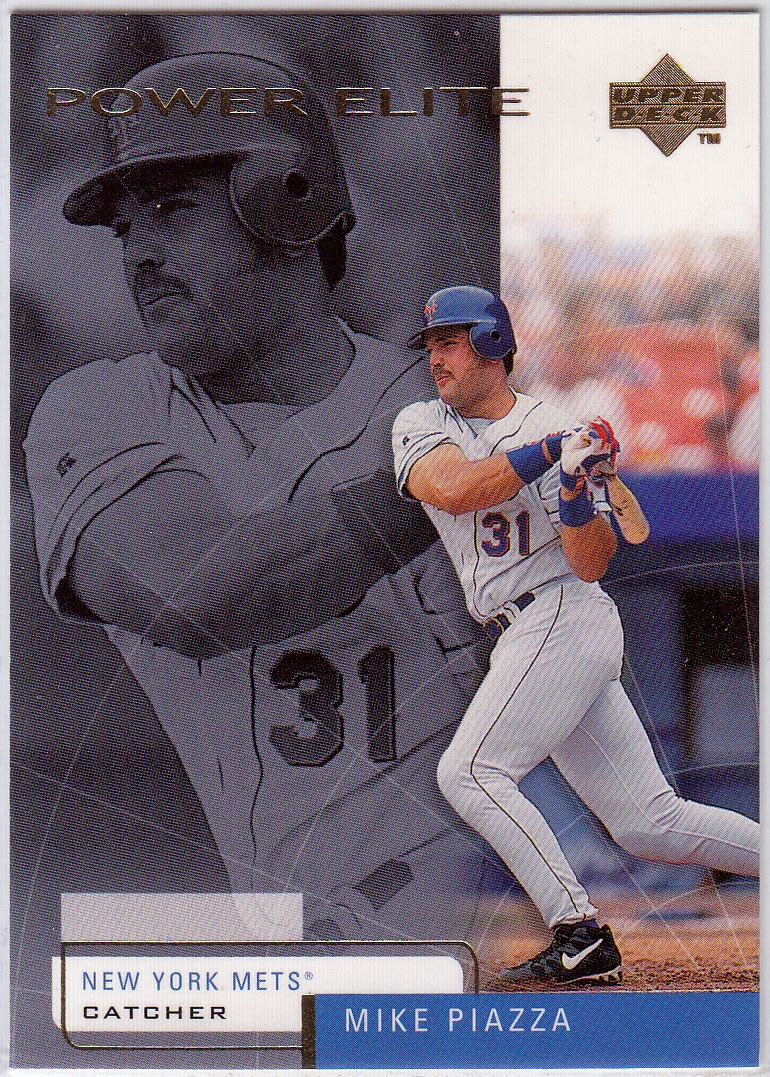 This pair of cards surfaced in 1999, which was Piazza's first full season as a Met.  Thanks to Mike's power stroke, the Mets made the playoffs in both '99 and 2000, reaching the World Series in the latter campaign. 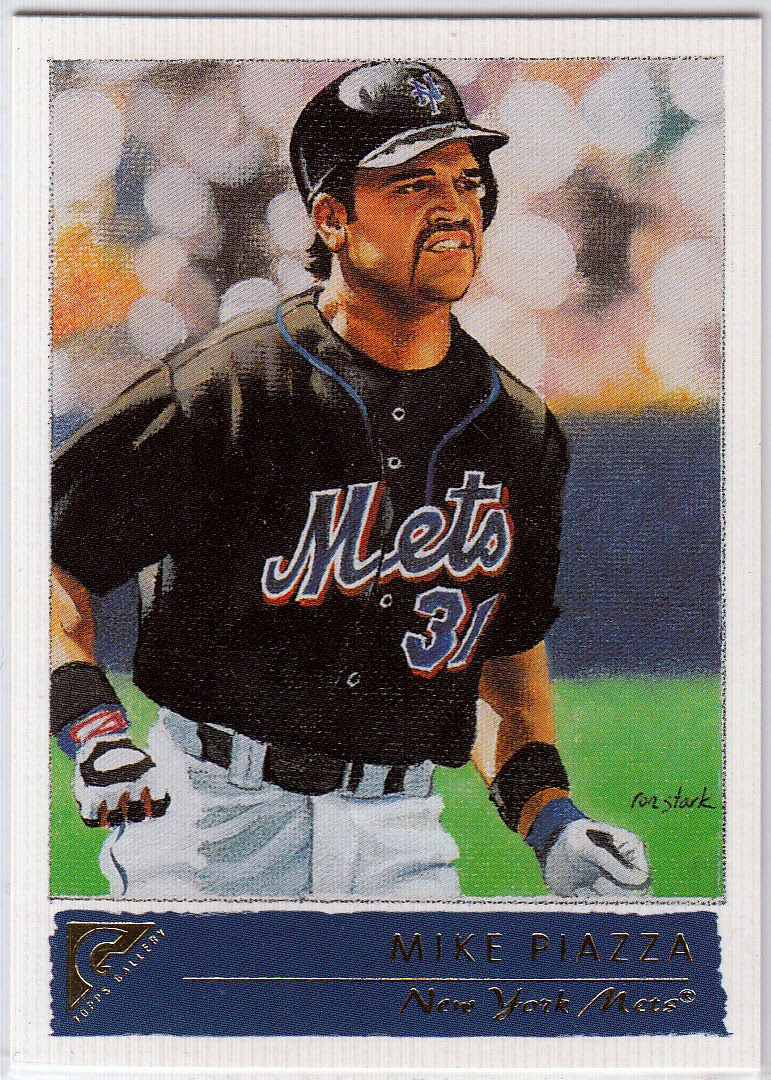 Topps Gallery was a pretty novel idea, and the 2001 Gallery set produced this sharp Piazza card.  I like how the backs of the cards include a little blurb on the artist. 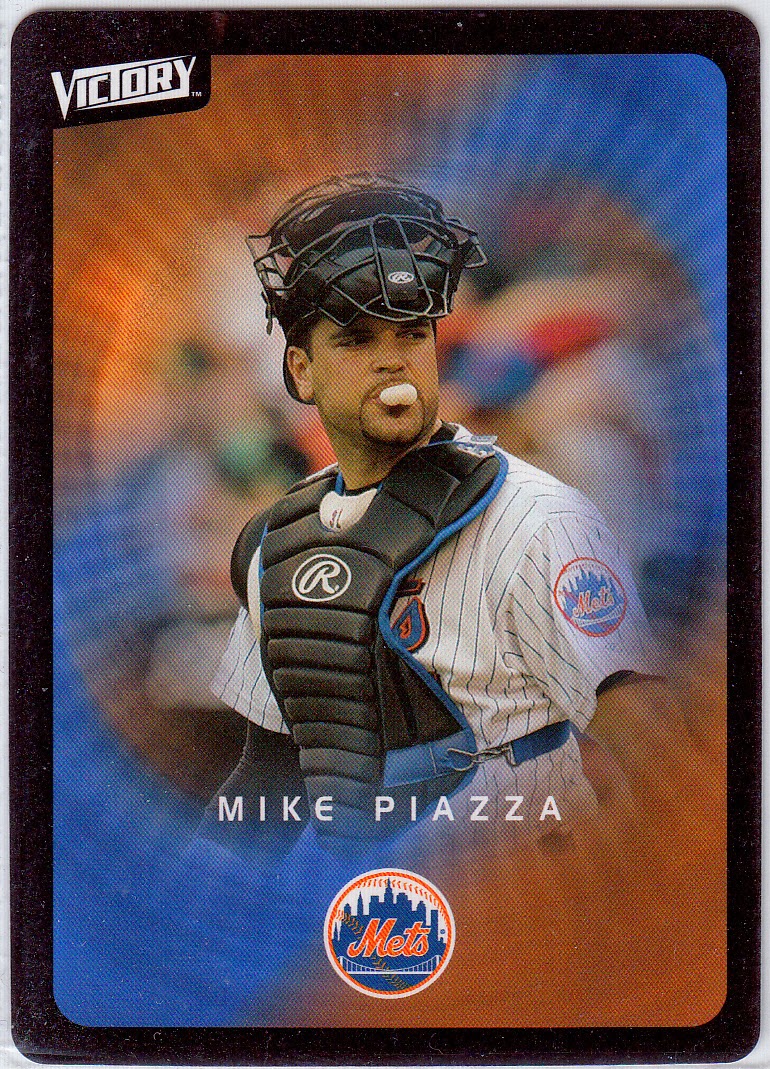 Upper Deck Victory in 2003 looked more like playing cards than trading cards.  Nonetheless, you can't tell me this card isn't terrific in a psychedelic and bubble-popping sorta way. 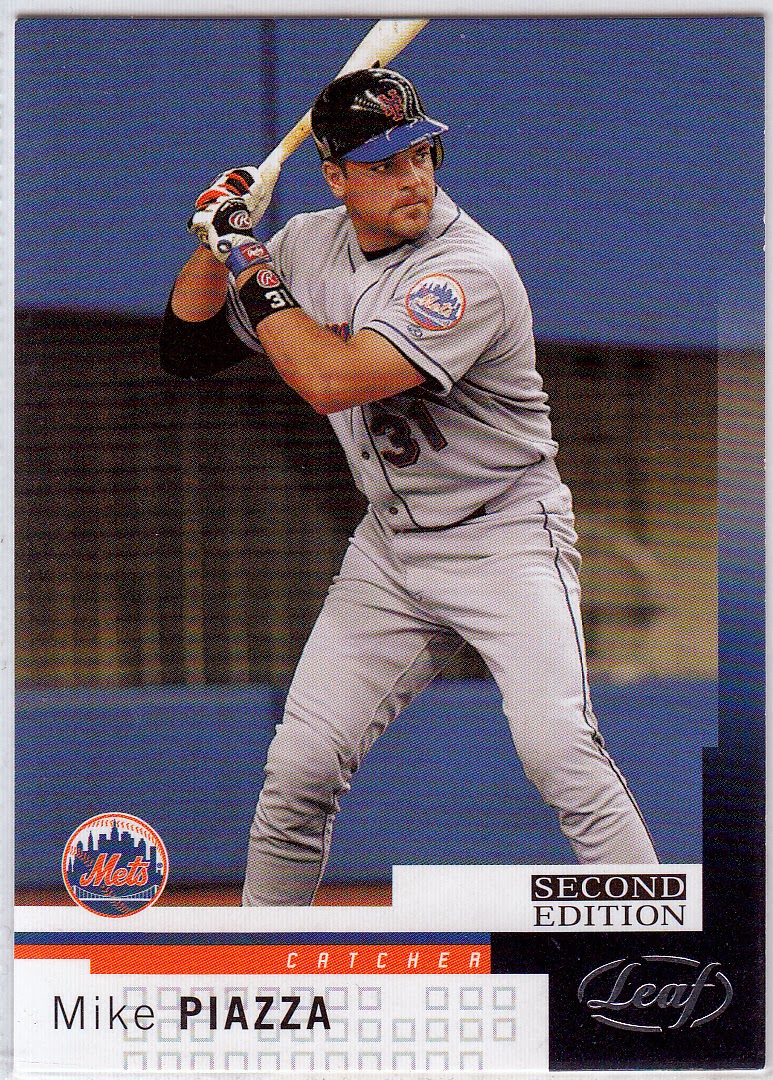 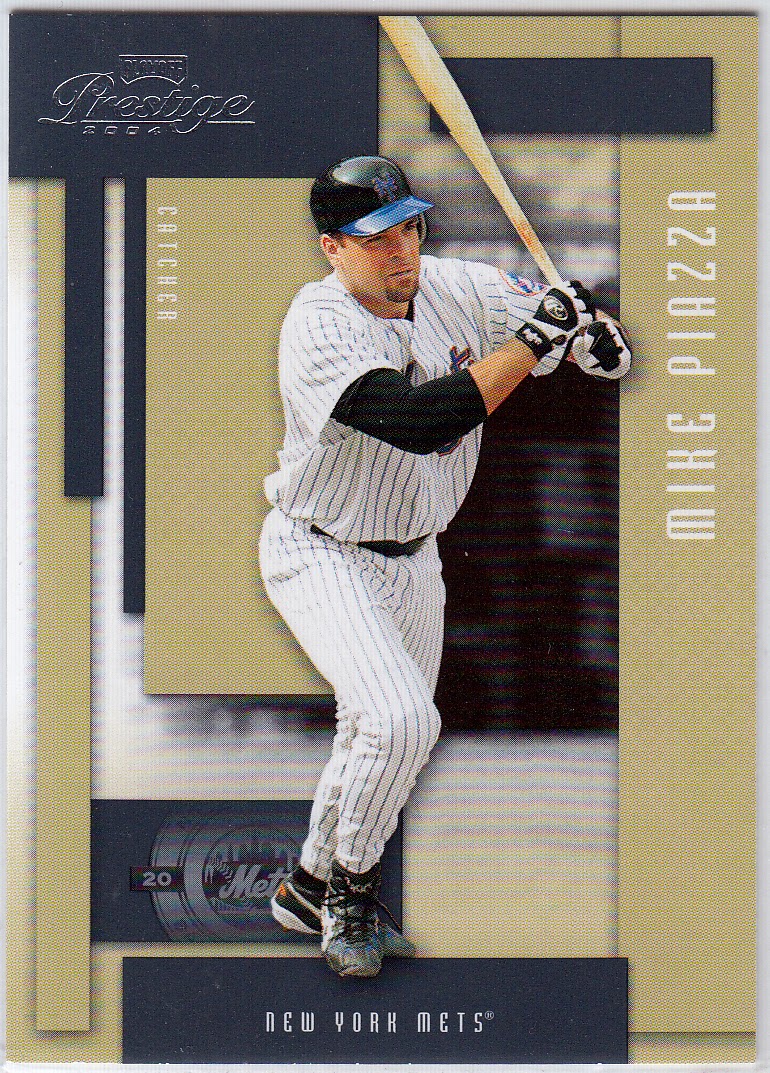 Two from 2004.  I like the Leaf card on the left mostly because of the old Olympic Stadium backdrop.  On the right, Mike is recoiling from a mighty cut.  Both of these cards rock! 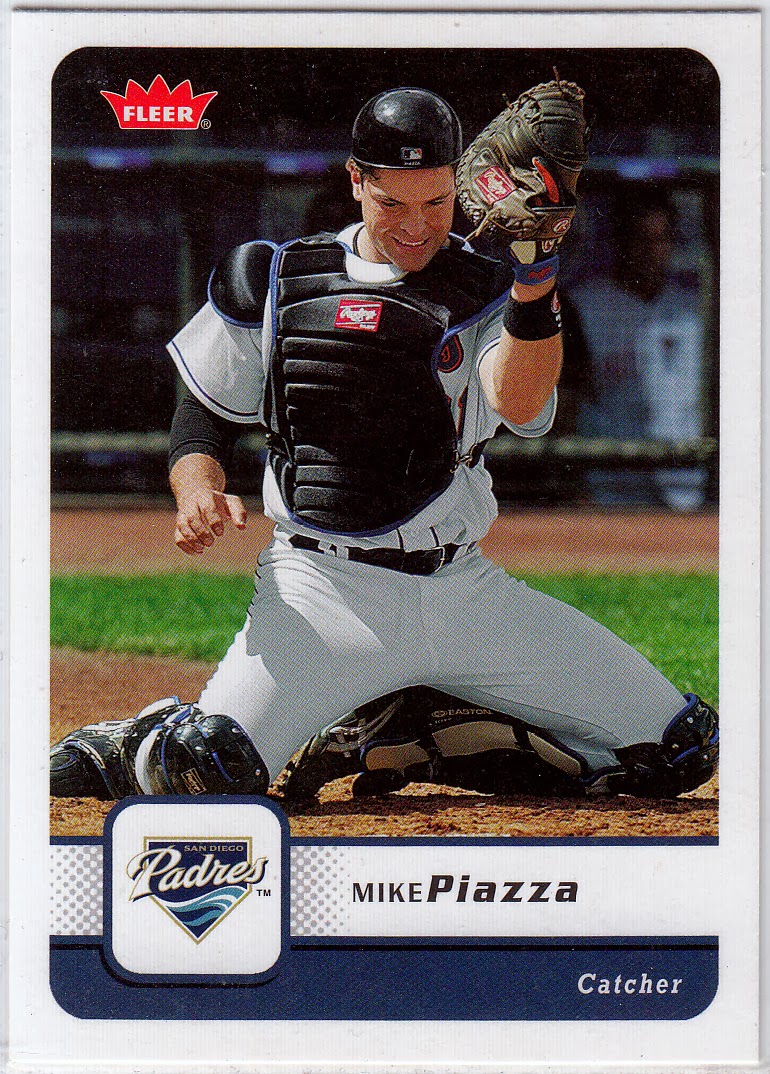 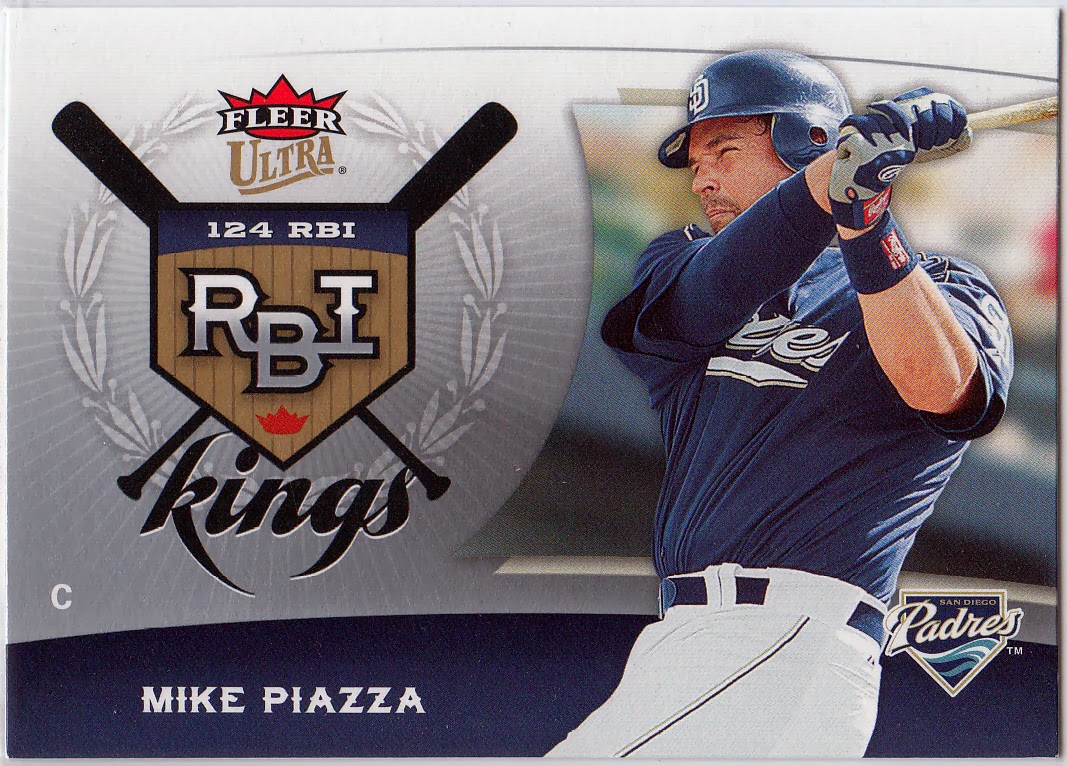 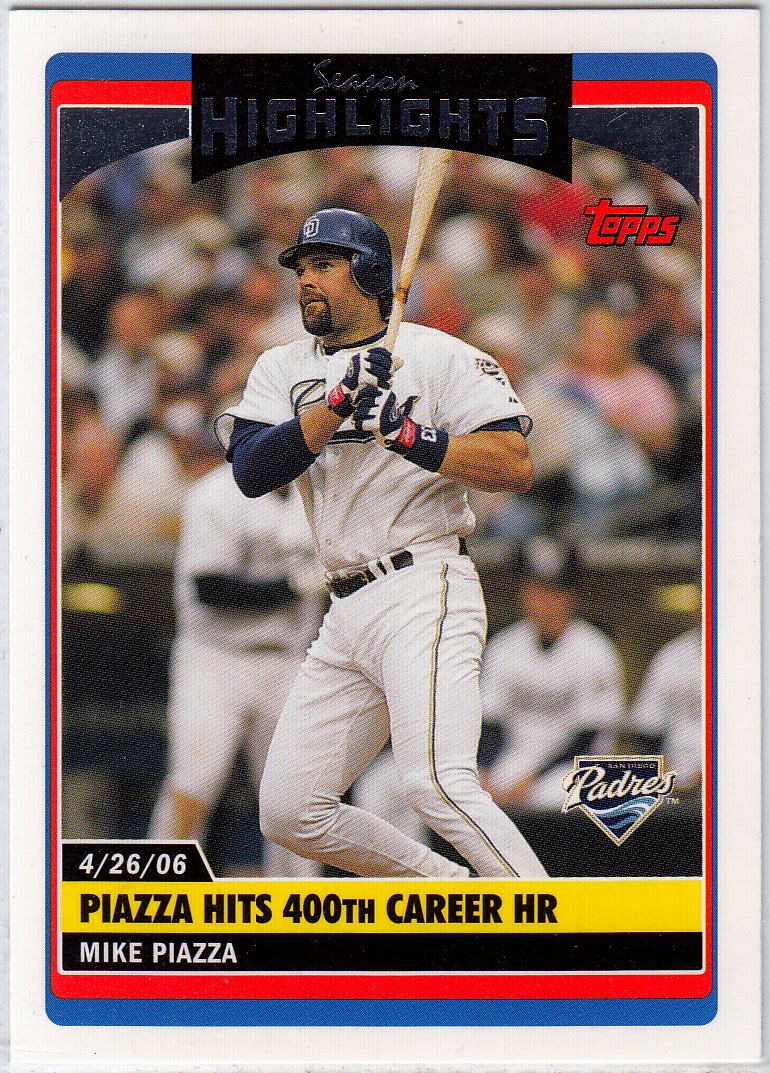 From 2006 Topps Update and Highlights: A very fitting conclusion to this parade of Piazzas.  Mike cracked 22 homers for San Diego in 2006, including No. 400 of his career.  The decorated backstop finished his career with 427 round-trippers.

Joe, thanks for pumping up my Piazza collection with these great additions!