A Little Help from my Friend 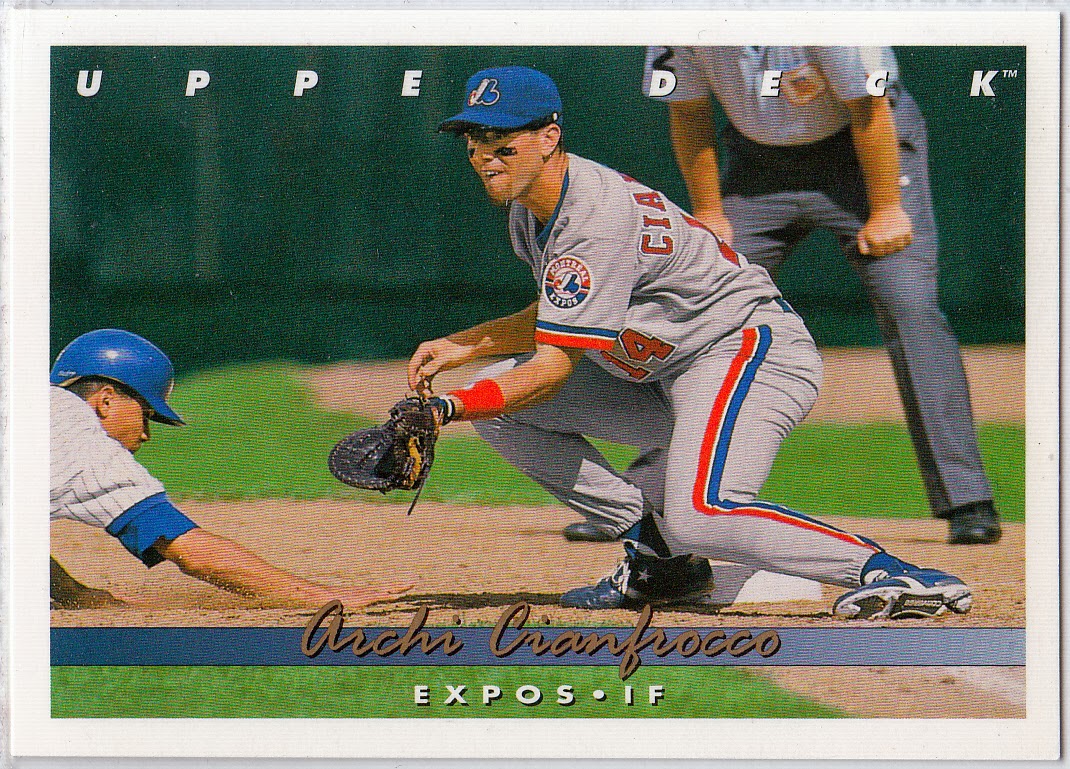 Who in the blog universe could have sent me an Archi Cianfrocco card?  The list of usual suspects can be counted on one...well...finger.  None other than the Marcus of Backstop Cards, of course!

If you follow the baseball card blogs, you know Marcus and you likely know that he collects cards of the one-time Expo and Padre.  And this undoubtedly is one of his spares.  It came in a bountiful bundle of cards my good buddy shipped to Delaware this past week.

The note included in the package informed me that Marcus was on board with my Horizontal Heroes frankenset project, so much so that he went out of his way to comb through his cards to find some candidates for inclusion. And, well, he did a bang-up job -- as he always does.

Not only that, but he even dipped into his very own Padres binder to pluck out a few gems for my venture.  That, my dear reader, is the sign of a true blue pal.  Furthermore, what's that odd breakfast anecdote that former Texas Tech football coach Mike Leach recited a few years ago?  Something about the chicken being involved, but the pig being dedicated?  No, no, I'm not calling Marcus a pig, for God's sake!  I'm saying he's a dedicated dude, and a guy I'm proud to know (at least through email!).

So let's take a peek at what else Marcus dug up, shall we?  Okay, well, I'll split the cards up into three subcategories: Padres Cards, Other Teams, and Player Collection Needs. 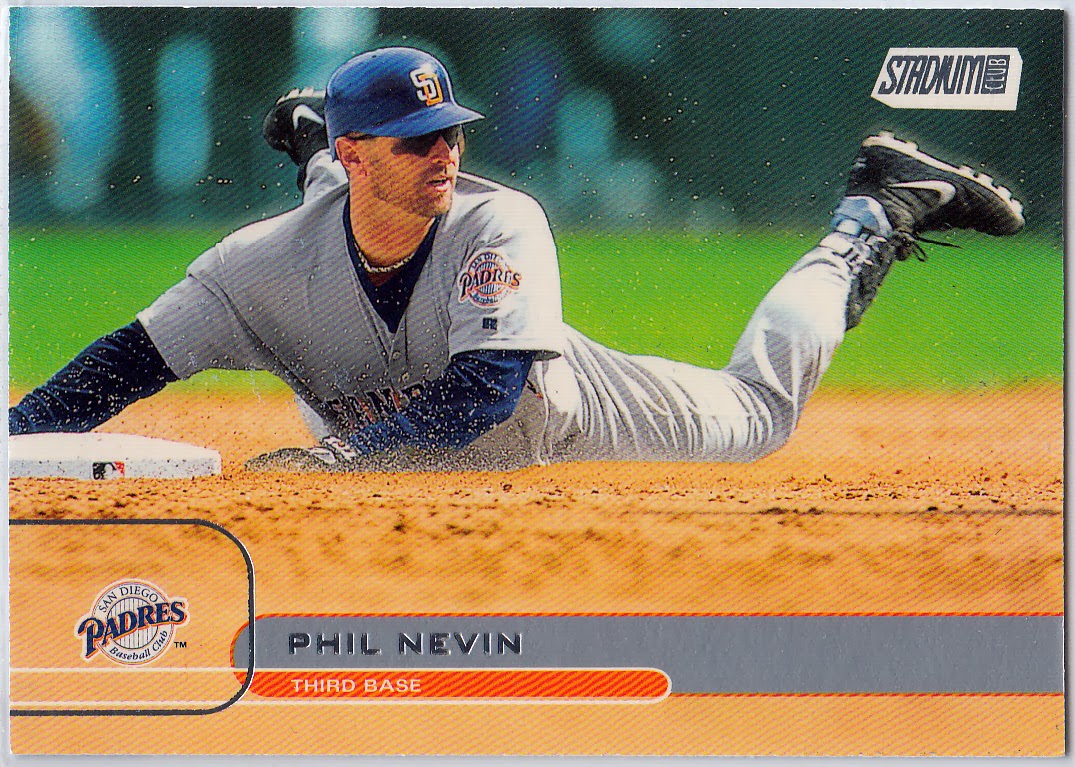 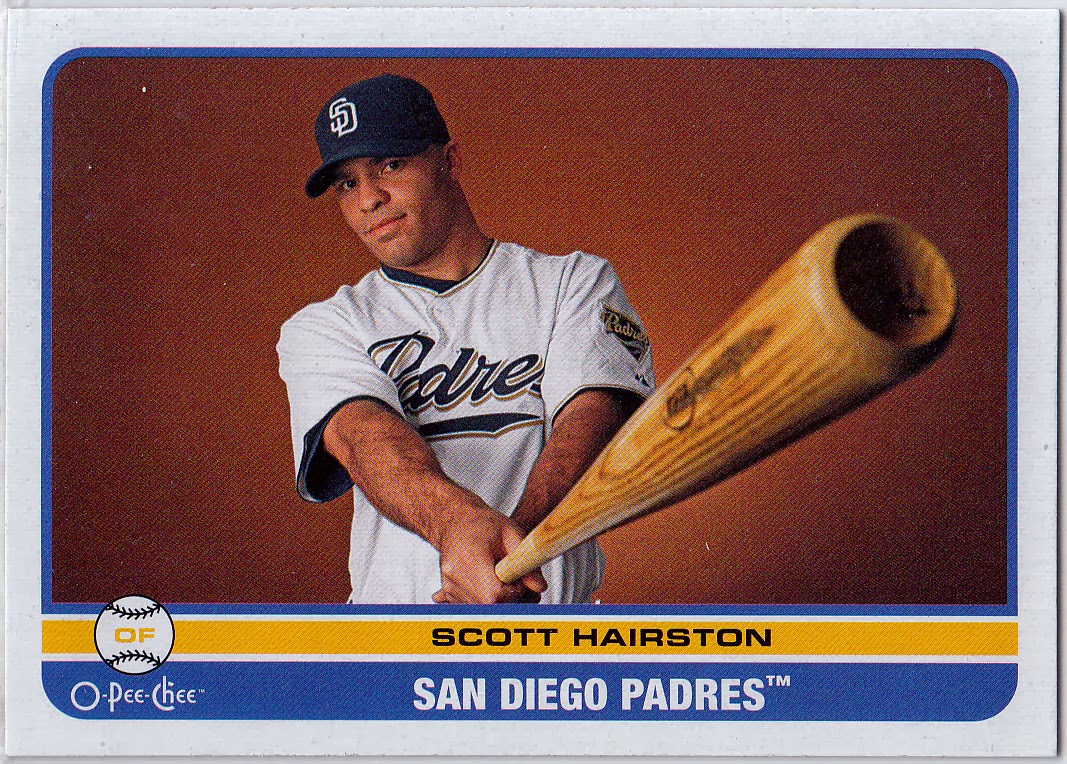 I loved this card immediately.  I'm a Scott Hairston fan thanks to his time in Flushing.  Beyond that, just look at this thing!  A true keeper at slot No. 296! 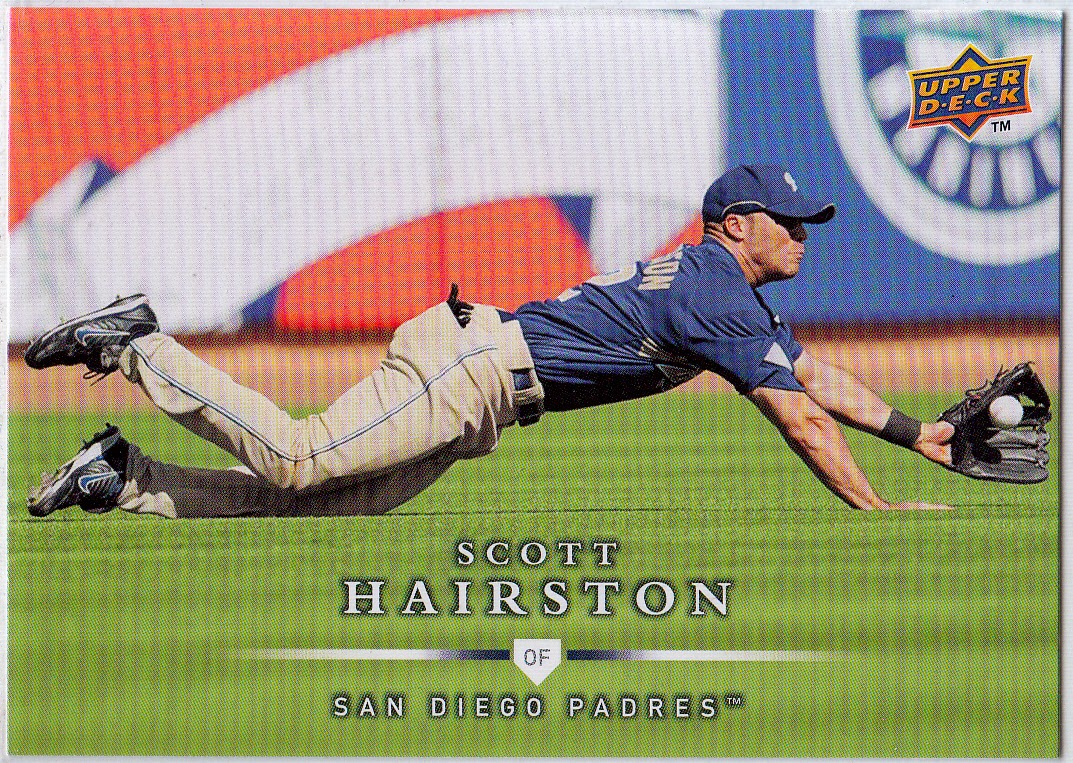 More Hairston isn't a bad thing.  There's no rule about the same player appearing twice in this particular frankenset project.  However, he's currently being blocked by another candidate (1994 UD Ben McDonald).  But, nothing is set in granite! 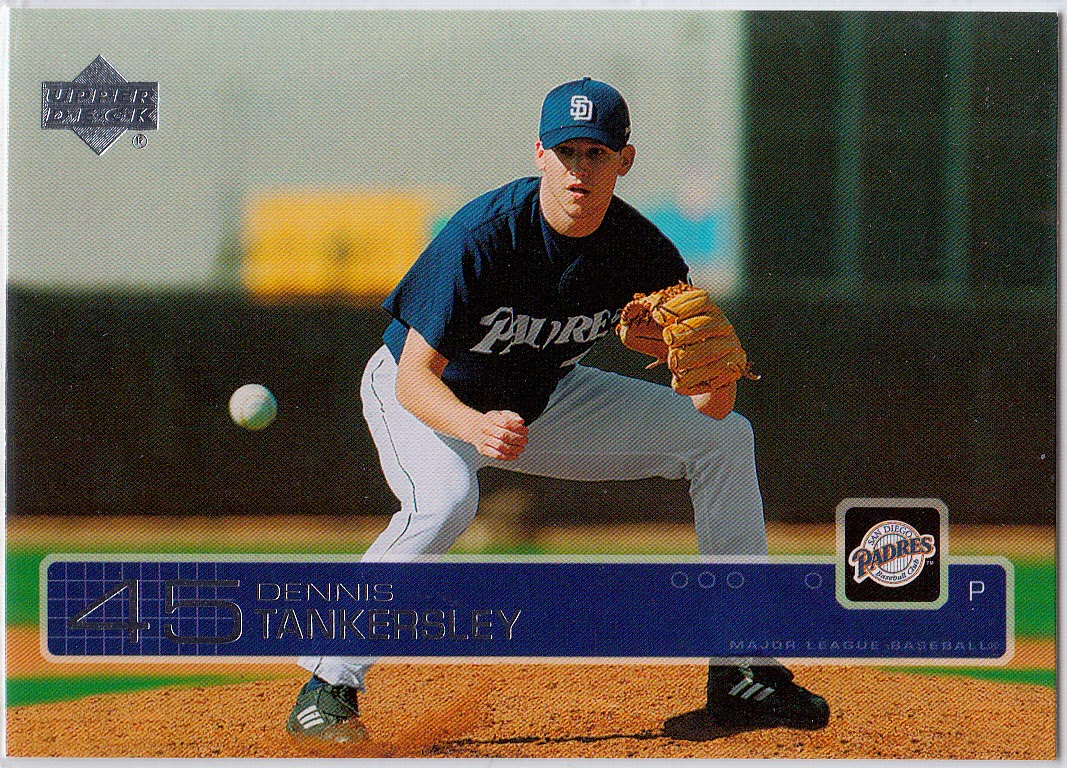 At card No. 470, this is the only card of a pitcher fielding his position currently in the Horizontal Hereos checklist.  I really like this one. I used to collect Brian Giles cards back in the day, but it didn't last long.  That certainly frees this card up for inclusion among its horizontal peers!  Presently occupying slot No. 372. 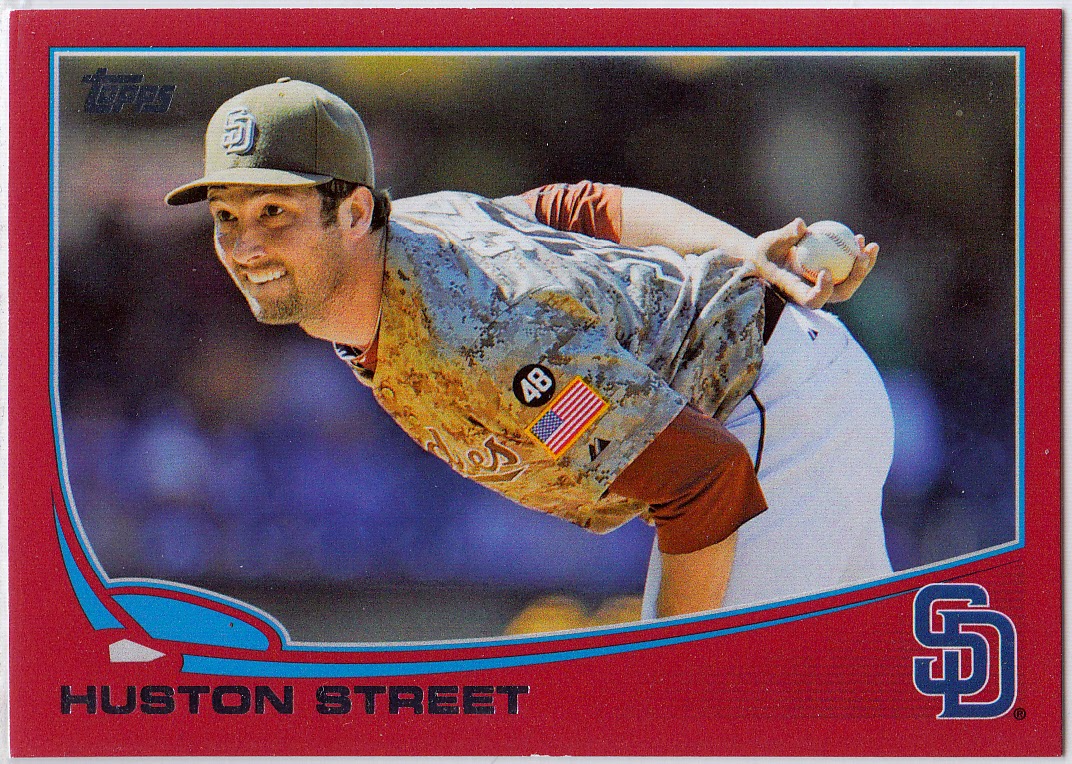 I like this one an awful lot for a lot of obvious reasons, and the fact that it's a Target parallel gives it an even bigger boost.  It's not a slam dunk for inclusion yet, but Mr. Street most likely will wrestle spot No. 549 away from the 1994 Bowman Pat Kelly card that currently holds that space.

Okay, now onto players from some other teams... 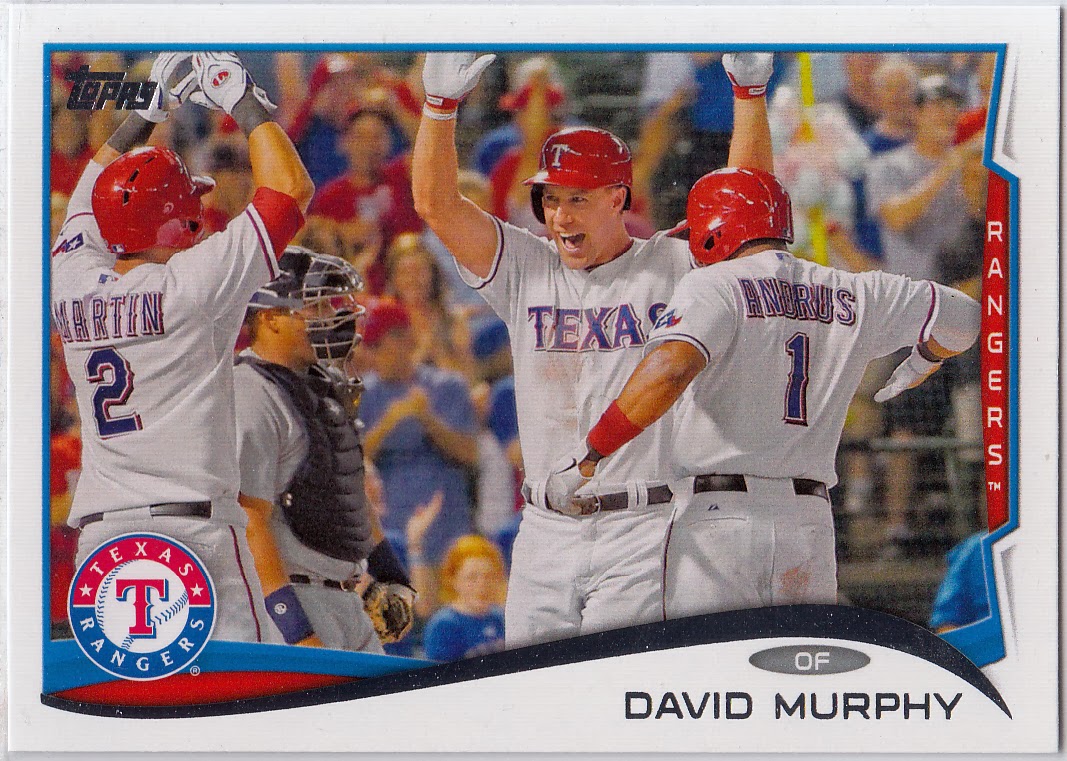 One of the cool things about not buying much 2014 Topps is that I can receive cards like this in the mail and actually enjoy seeing them for the first time.  This is a great addition at slot No. 39. 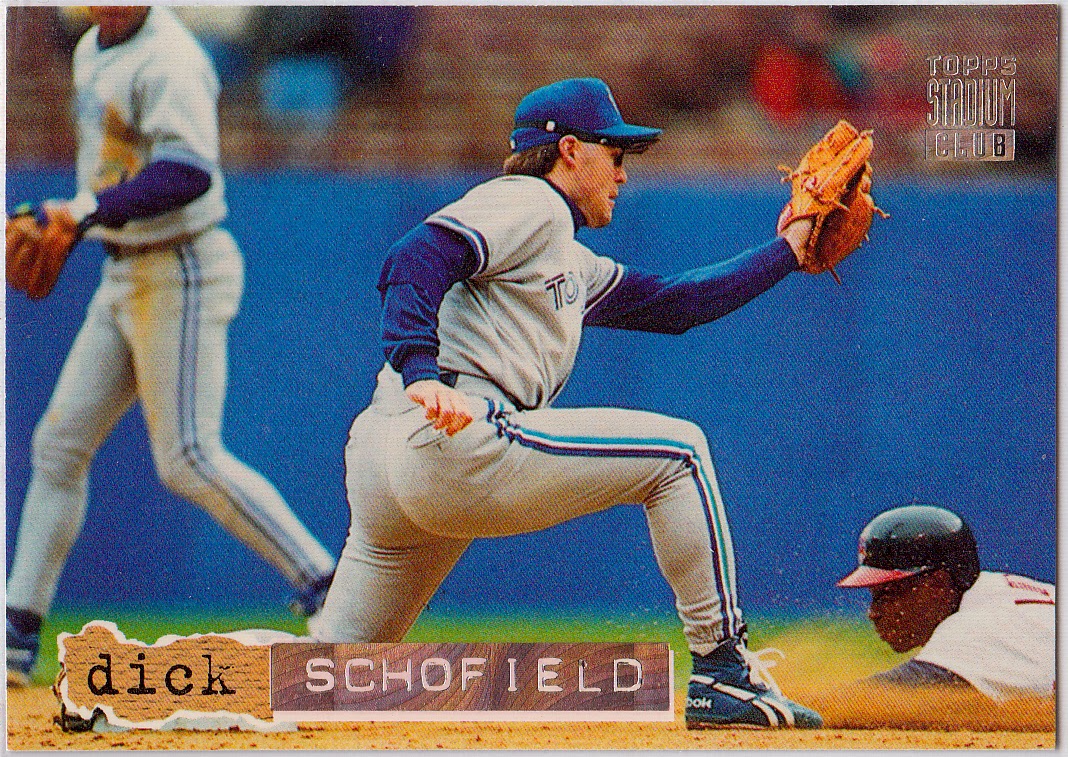 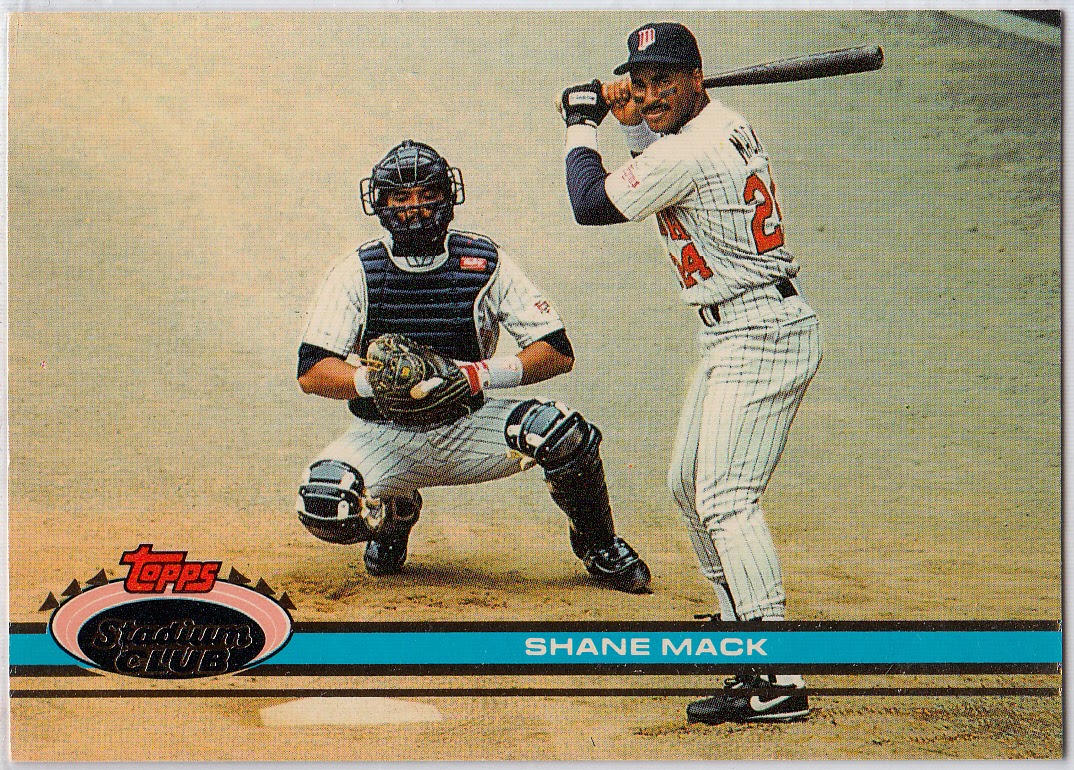 One of the quirkier cards you'll ever come across, for sure.  Where are they?  Why are they?  Don't know, and don't care, because this is a keeper at spot No. 259. 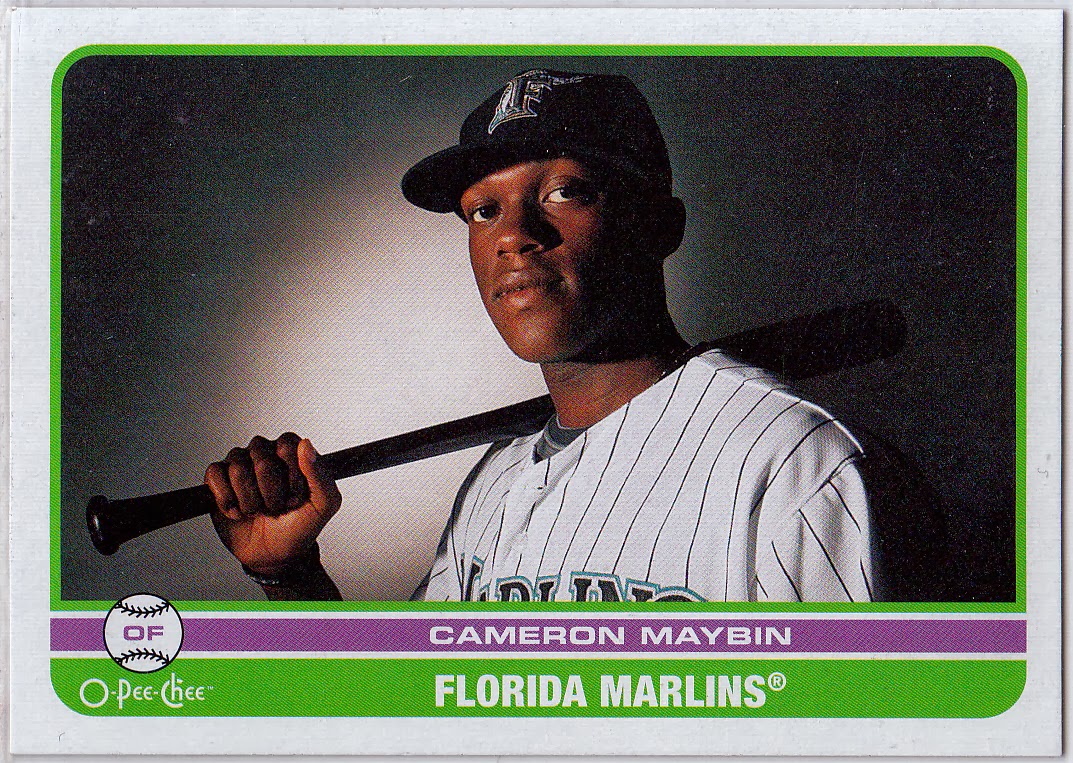 The 2009 O-Pee-Chee set is one of those that I'd love to chase down some day.  For now, I'm all about enjoying a few individual pieces such as this Cameron Maybin gem.  He makes the cut at No. 495. 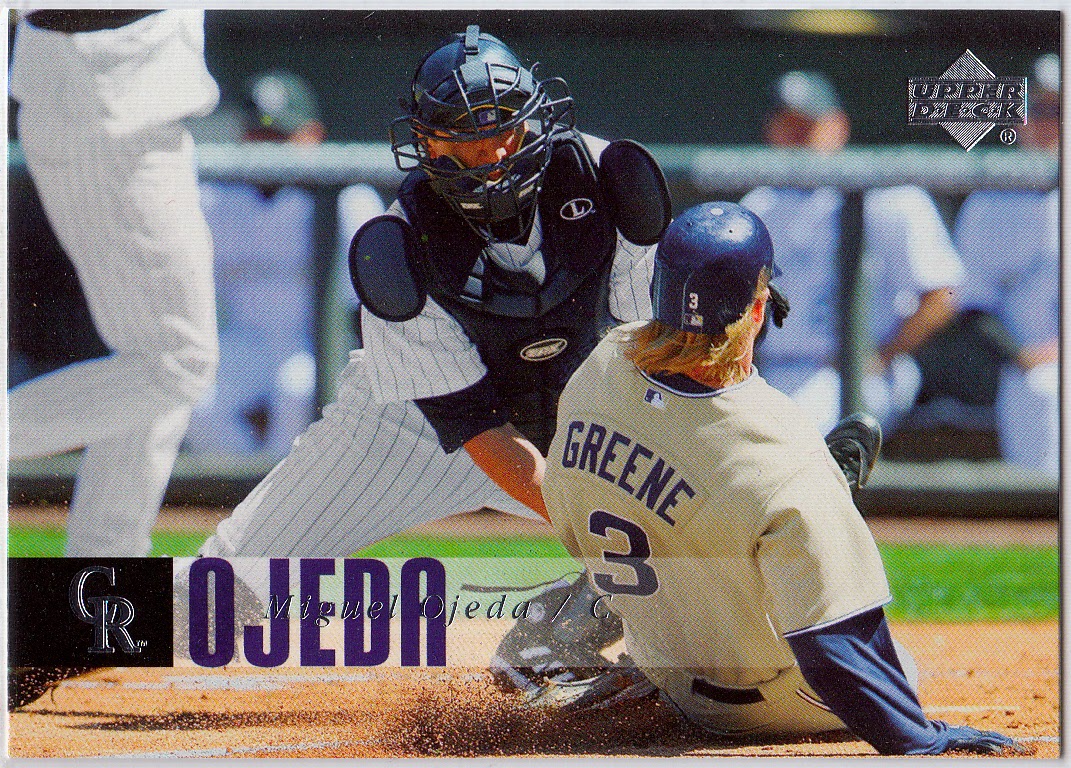 Uh oh.  Isn't this a conflict of interest for Marcus?  Helping me out, yes, but at the expense of Khalil Greene getting tagged out at home?  What was the chicken/pig thing again?  You're a trooper, Backstop.  Ojeda makes the dance at the prestigious No. 600 slot. 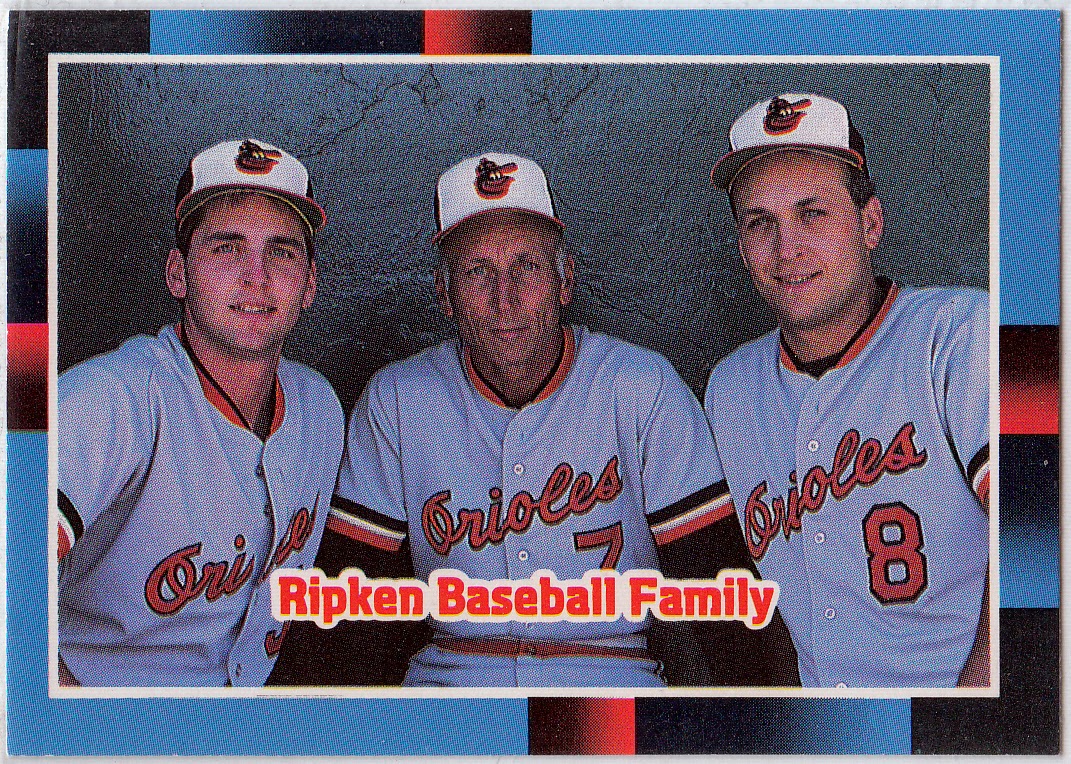 When I decided to go ahead with this frankenset, probably the last thing I would've imagined is that a card from '88 Donruss would be a factor.  After all, there aren't any horizontal cards, right?  Meet card No. 625.  It's a Teflon inclusion into my set!

And, now a fine grouping of cards that absolutely meet the criteria for Horizontal Heroes inclusion, yet I can't bear to keep them from my player collections box. 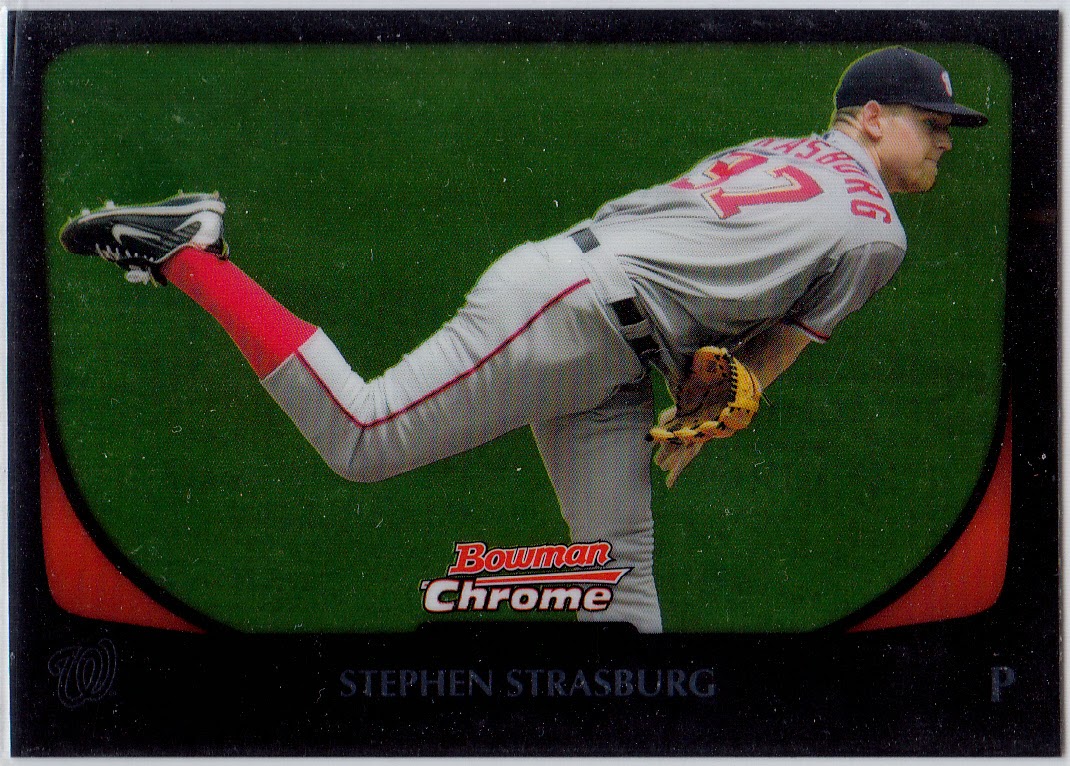 The Stras!  And Chrome, too! 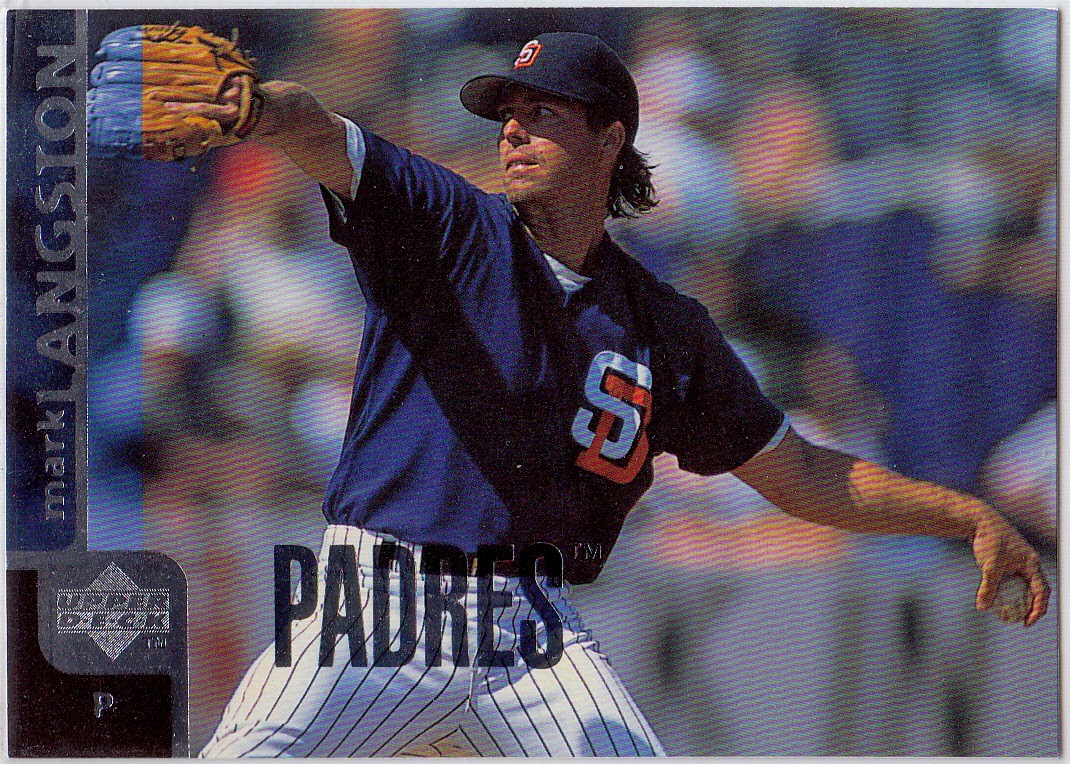 Gotta be honest here, I had no recollection of Langston pitching for the Pads.  I have a small collection of his cards, but a collection nonetheless.  And this is an awesome addition! Eventually, I will need to break down and get an extra copy of this one for the frankenset.  For now, Mo 2014 goes into a penny sleeve and into the box with the rest of his cardboard cousins. 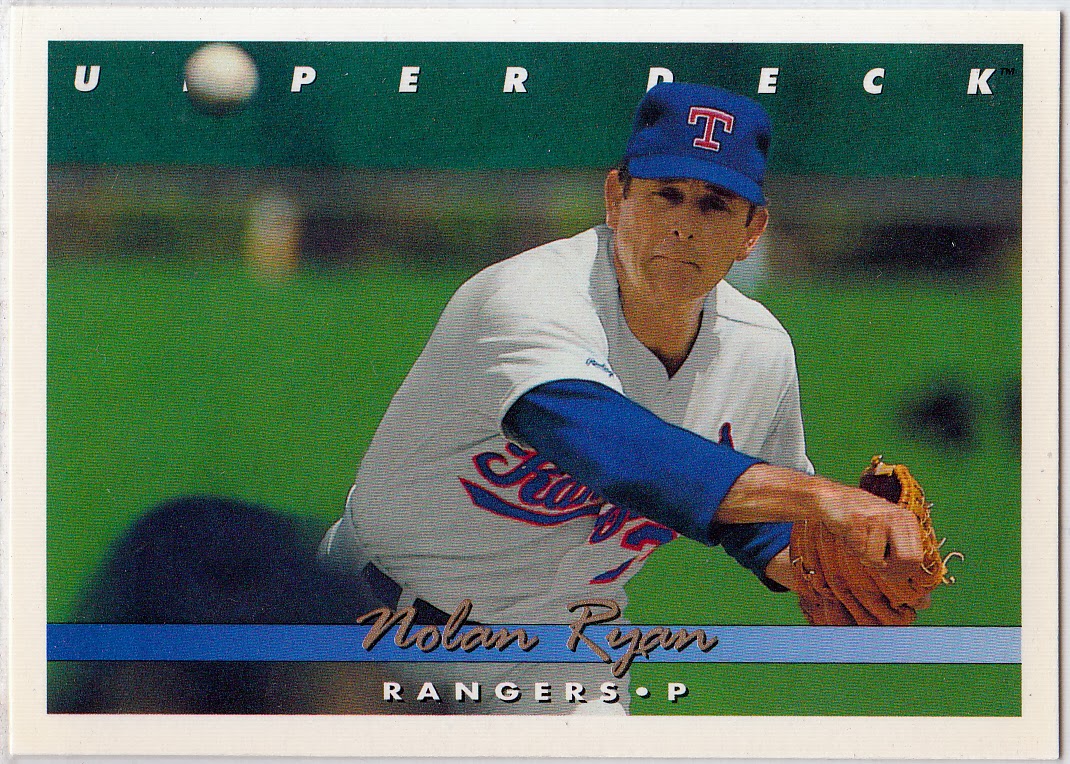 I dread the day that I'll no longer see a '93 Upper Deck card previously unbeknownst to me.  But, yeah, I've never seen this card of the Strikeout King before.  What a cool discovery! 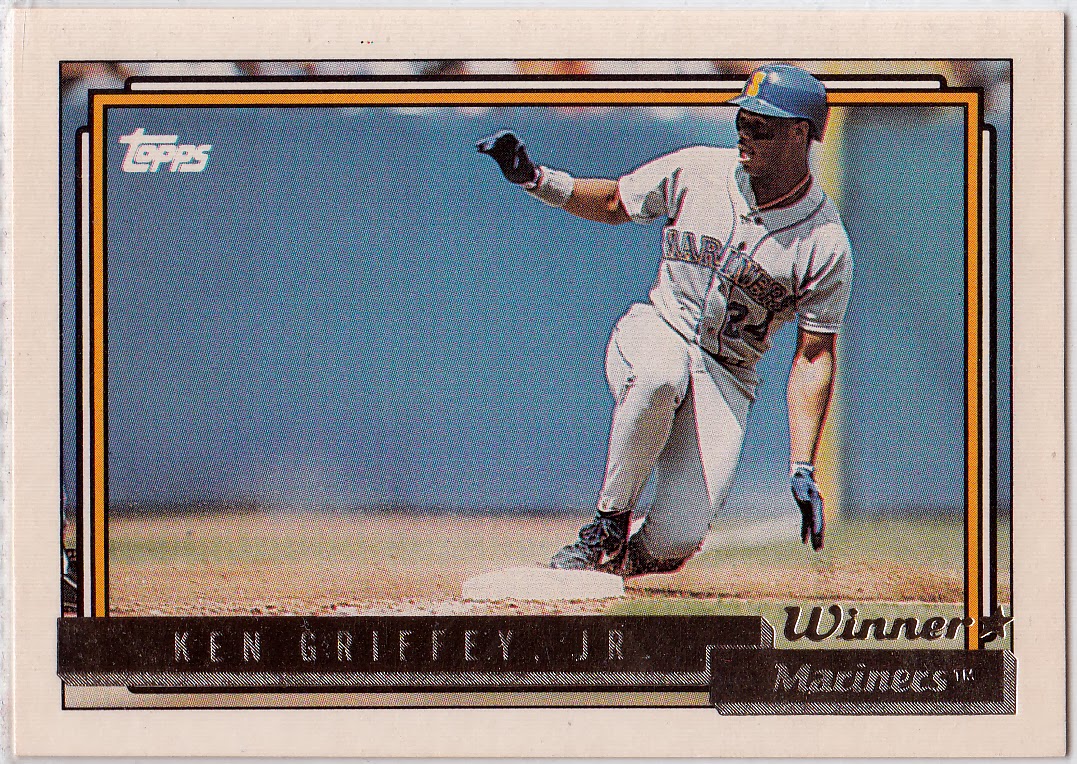 I woulda done cartwheels to have owned this card as a 12 year old in 1992.  The non-gold Winner version was one of my favorite cards of that year. 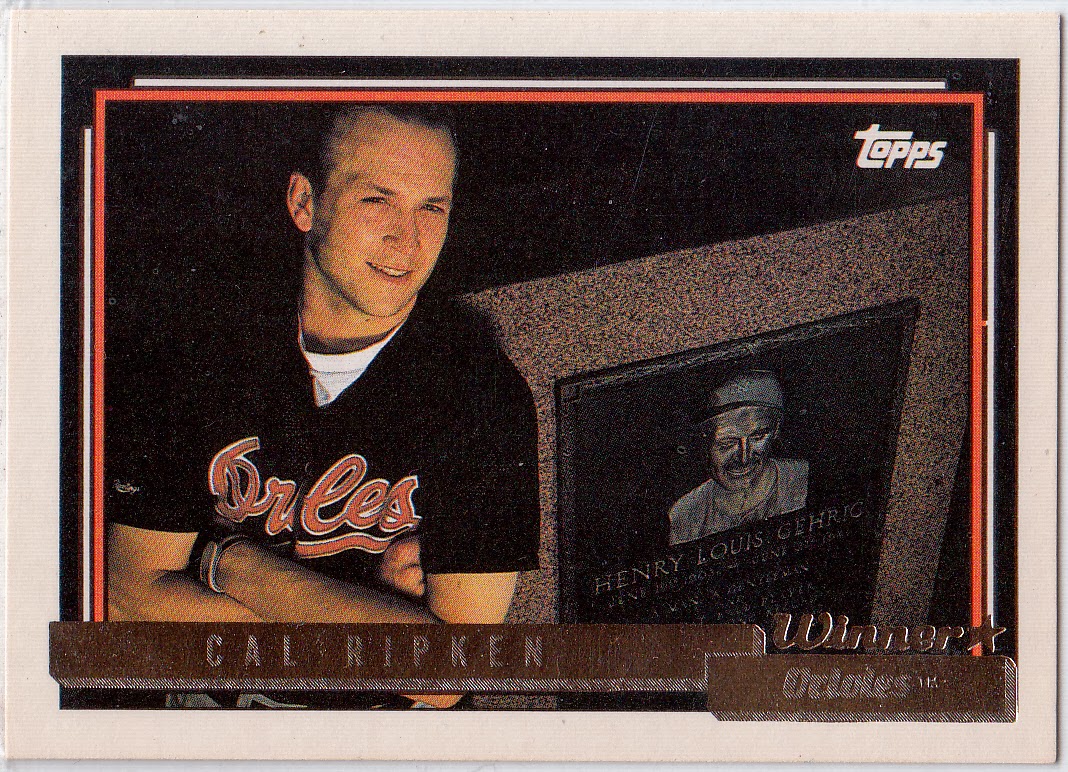 Is this not one of the greatest cards Topps ever conceived?  It's practically perfect in design and execution. Happy to have a golden version of it now for my Cal collection.

And beyond all this horizontal and frankenset stuff, my buddy Marcus also included this Amazin' card: 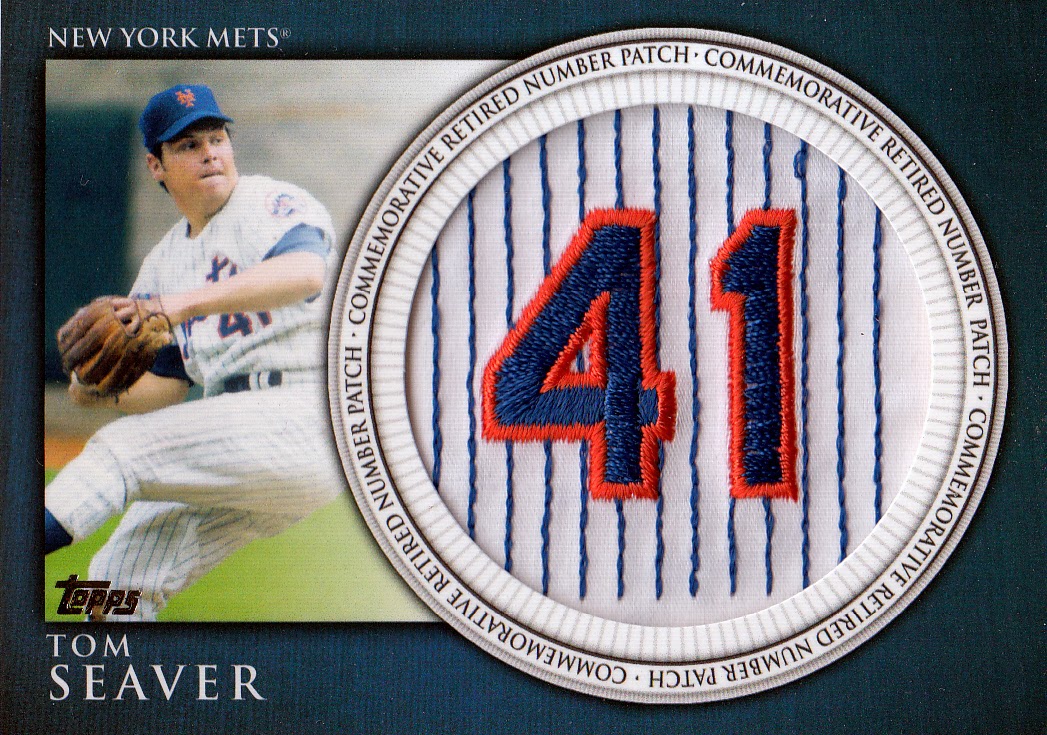 Love it!  From 2012 Topps, the retired numbers manu-patch of the greatest Met of them all, George Thomas Seaver.  Still the only player to have his jersey number retired by the team.  I'm hoping they add Mike Piazza's 31 to the list, but for now, it's just Tom Terrific.

Oh, and in case you're wondering about the Archi card from the top of the post, he sadly won't make the frankenset.  A true victim of numbers, as it were.  Brilliant as it is, Cianfrocco's '93 Upper Deck card is No. 736, which does not fall within the 1-660 range of my project.  But, for a card so good, maybe I'll have to consider adding a "High Numbers" extension onto the set somewhere down the line.

Anyhow, thank you for going above and beyond, Marcus.  Collecting cards with a little help from your friends is a wonderful thing!