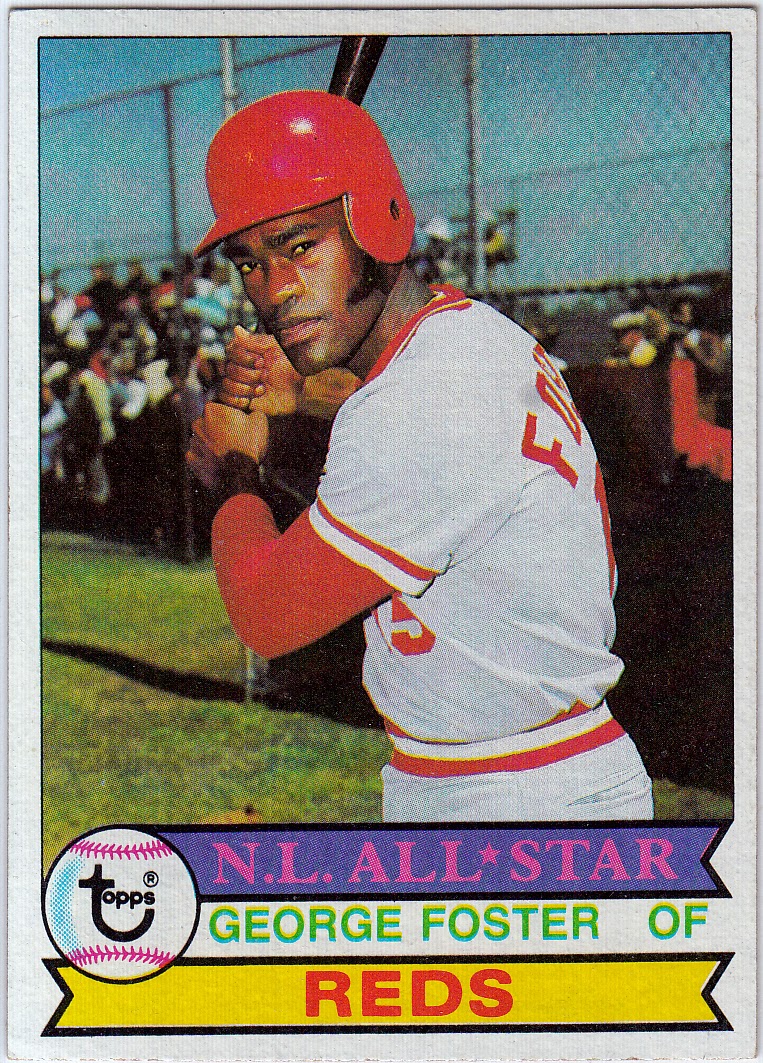 Time to crack open another five-dollar, 400-card special from my local hobby shop.  Again, yes, I should be squirreling my money aside for when Heritage arrives, since I plan on doing a cannonball into the deep end on that set, as usual.  But, I'm a weak little man, what can I say?

This '79 Foster was the oldest card of the batch, and it's also my favorite from the box.  Anyone know the story about the airbrushed batting helmet?  Where's the Cincinnati logo?  Well, who cares anyway; look at those wicked cool sideburns and that trademark scowl!

Section 1: Some Players I Collect 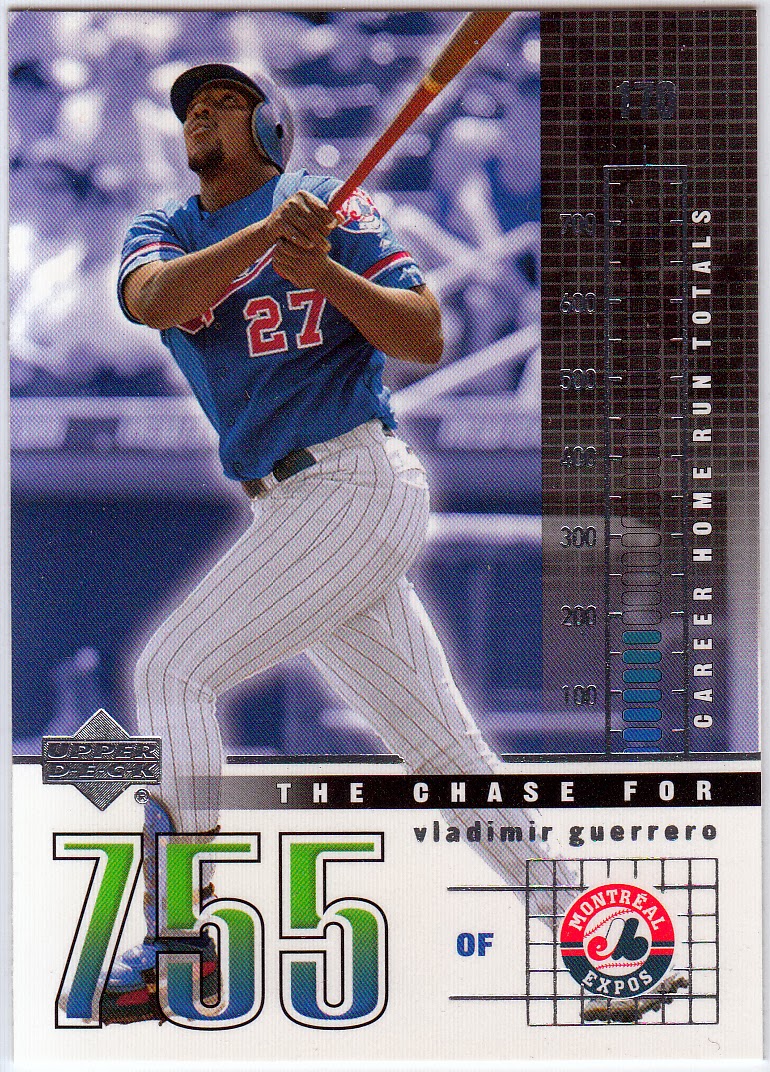 There must be 10 million Vladimir Guerrero cards in existence.  Yet, I still act surprised when I come across one I've not seen. 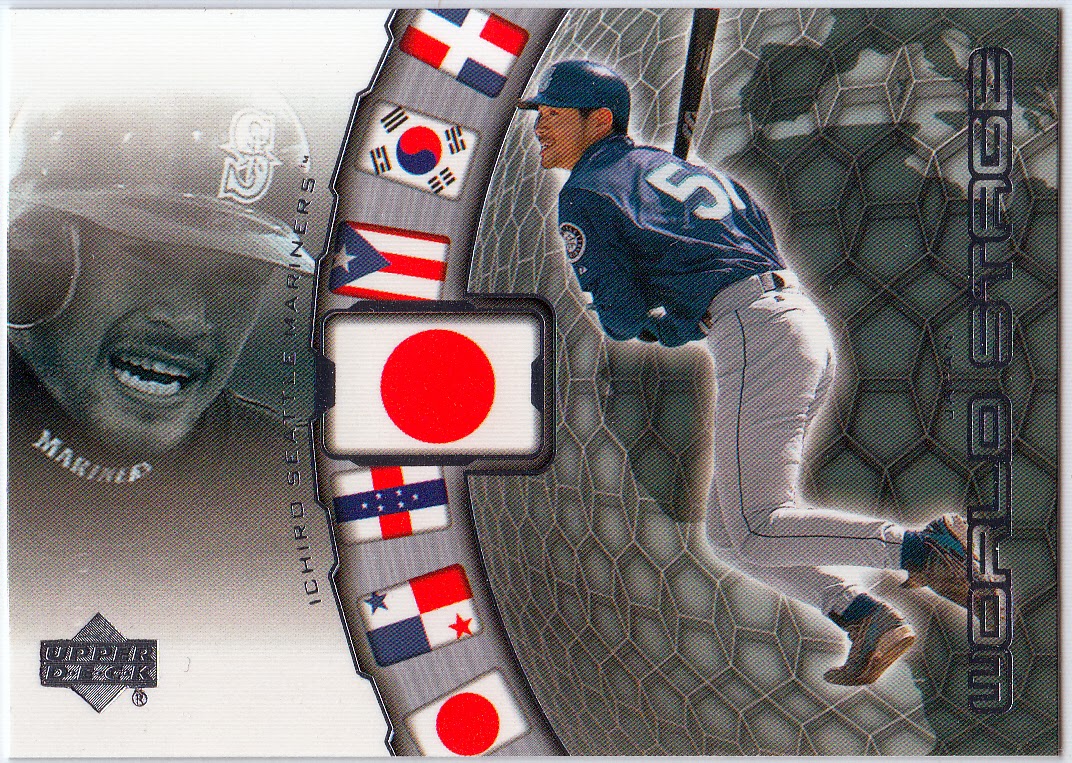 Another neat subset card from Upper Deck.  The back of the card informs us that Ichiro was the leading vote-getter for the 2001 All-Star Game, thanks largely to his adoring Japanese fanbase. 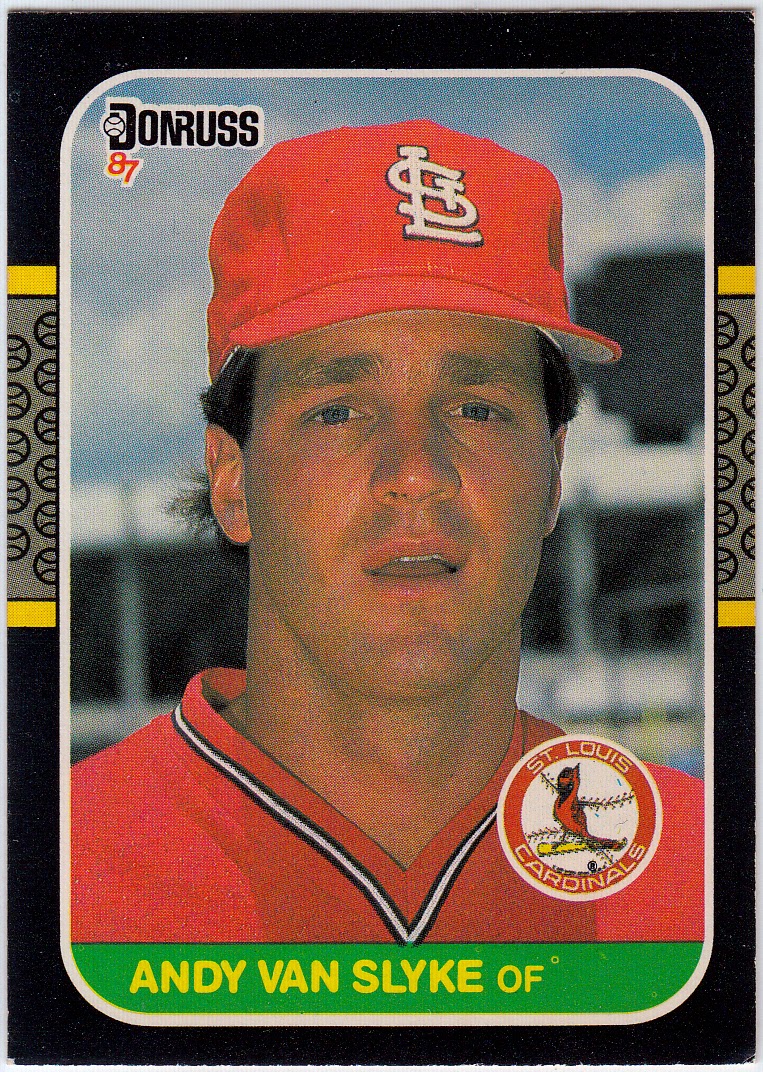 I see so many emotions in Van Slyke's face:  Surprise, fear, apathy, regret, anger, confusion.  Just to name a few.  Hard to believe this is the photo they chose.  Well, at least it's memorable. 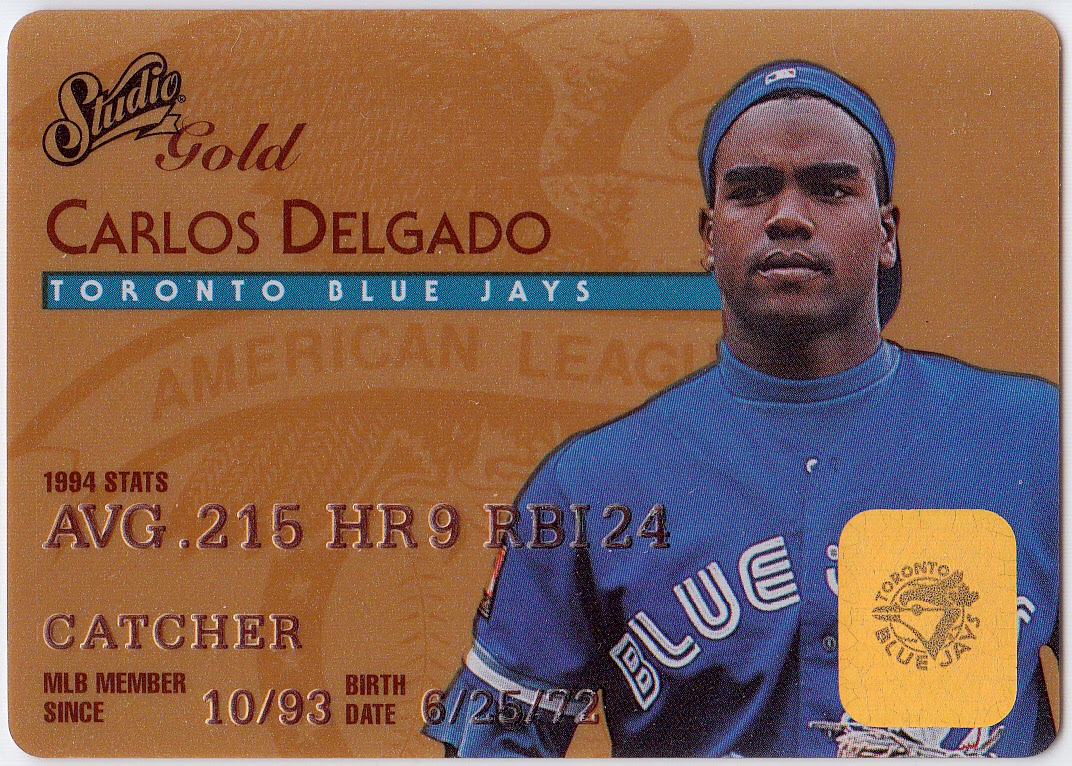 Move over Diner's Club and AmEx, and hello Studio Gold Card!  Never leave home without it... 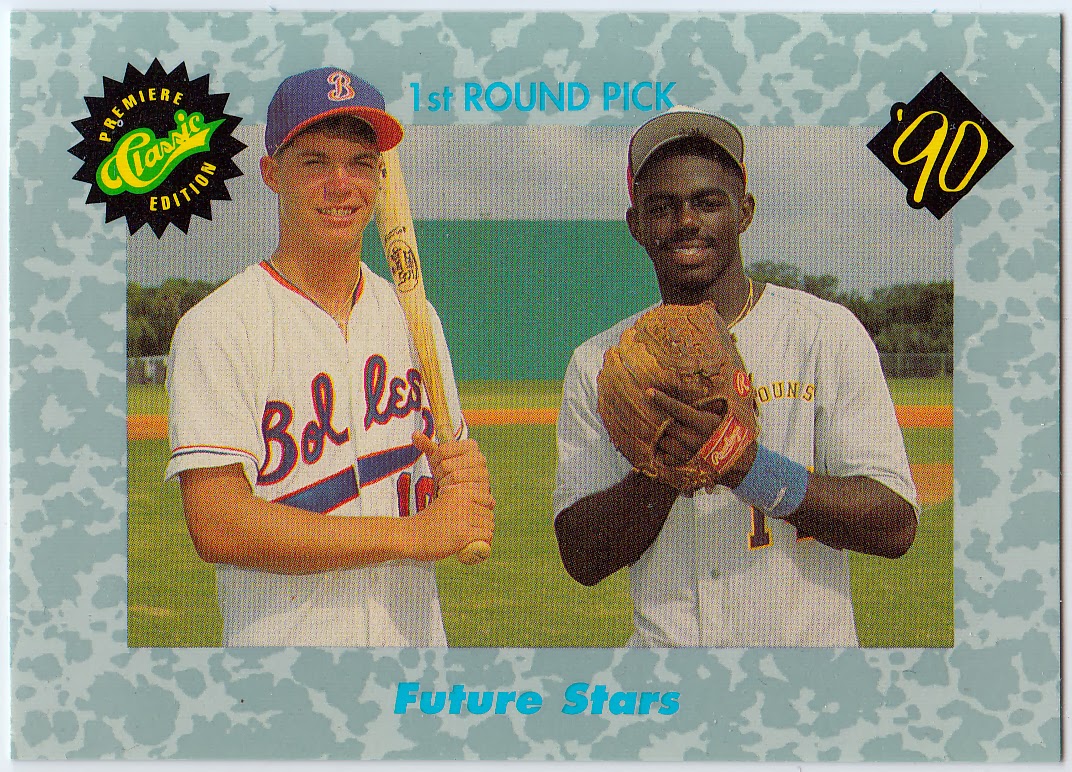 Man, I thought I saw a young looking Chipper on his '91 Topps card, but this one takes it to a new level.  Looks like he and his friend (who is that guy, anyways?) just got down whitewashing the fence and now they're ready to play some ball!

Section 2: I Don't Collect These Guys, But These are Great Cards 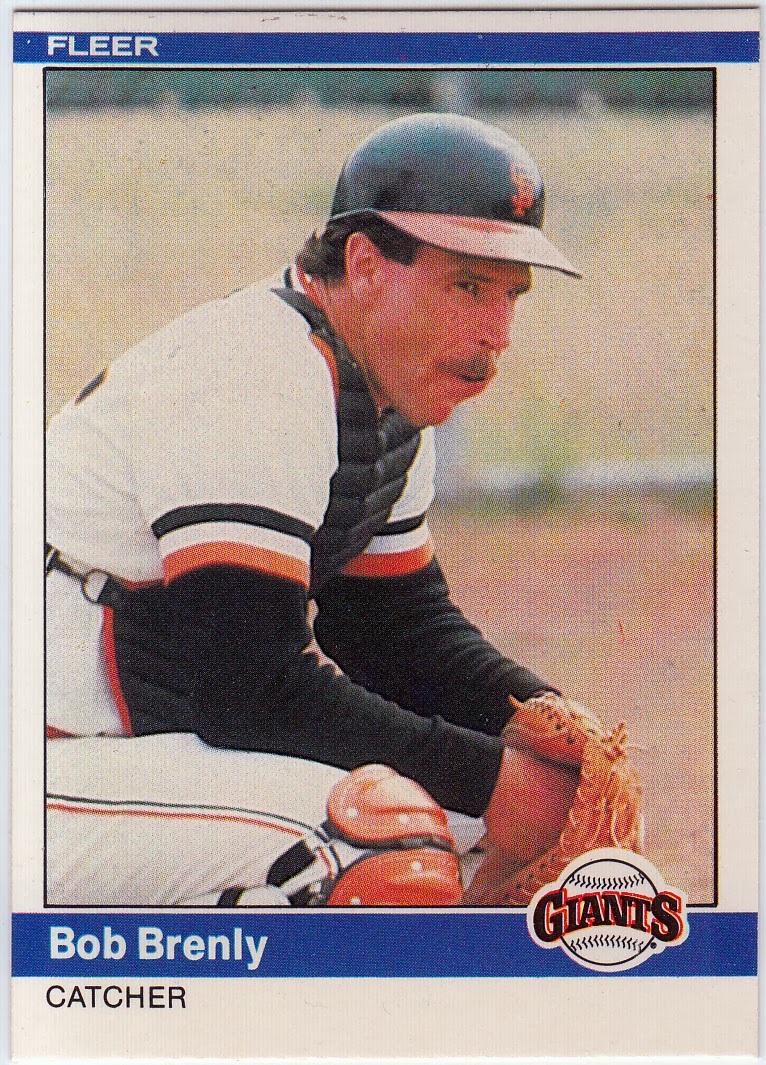 Here, Brenly looks like every actor who was ever cast to play a broken-down old catcher in a baseball movie. Either that, or he looks like Capt. Stottlemeyer from Monk.  Both work for me. 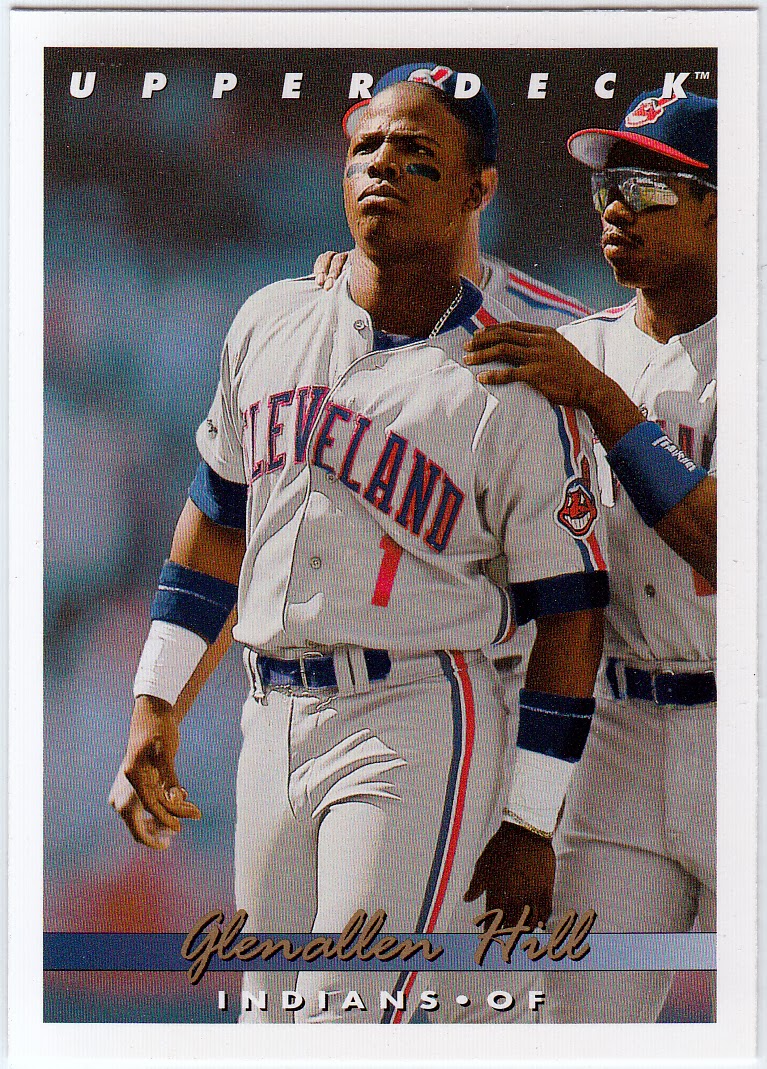 I can't get enough Glenallen Hill these days.  Just so intense, always.  Here, he's either getting a pat on the back for a walk-off hit of some variety, or his teammate (is that Lofton? Alex Cole?) is doing his best to calm G-Hill down before he rips someone's head off.  Love it!

"Your bat, sir."  Girardi has some pretty decent cards to his name, but this has got to be one of the best, right? 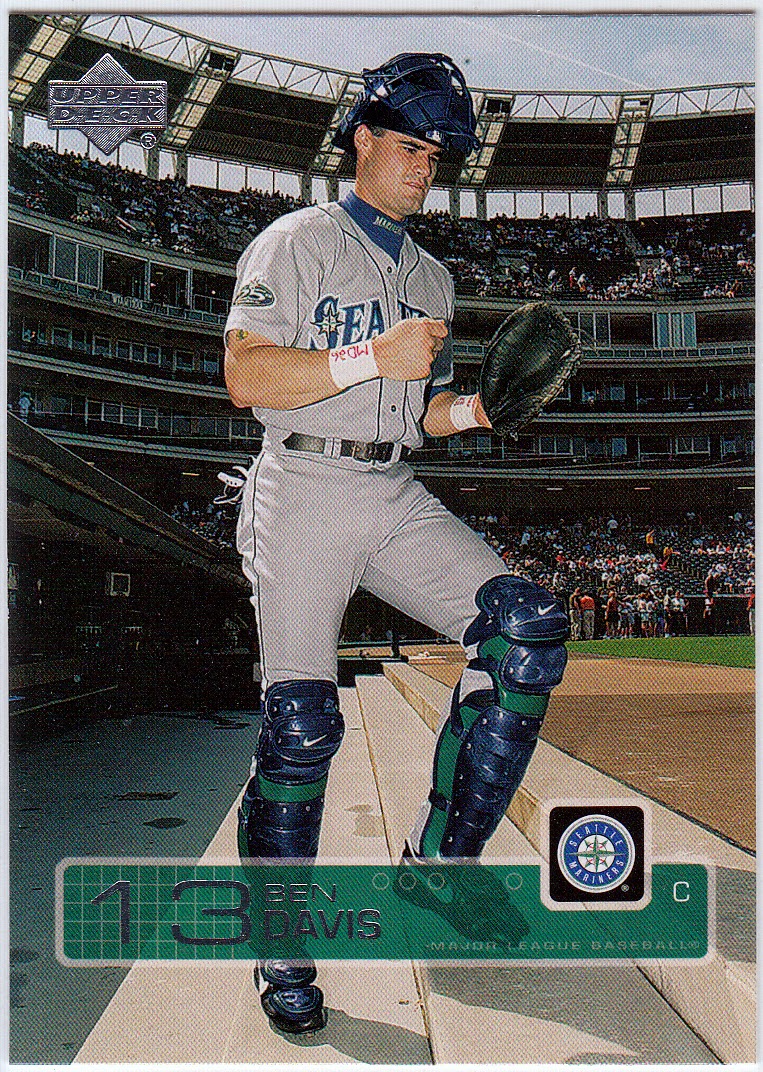 This isn't a baseball card; it's art!  You know you've got something special when even Oakland Memorial Colosseum (or whatever it's called today) looks beautiful. 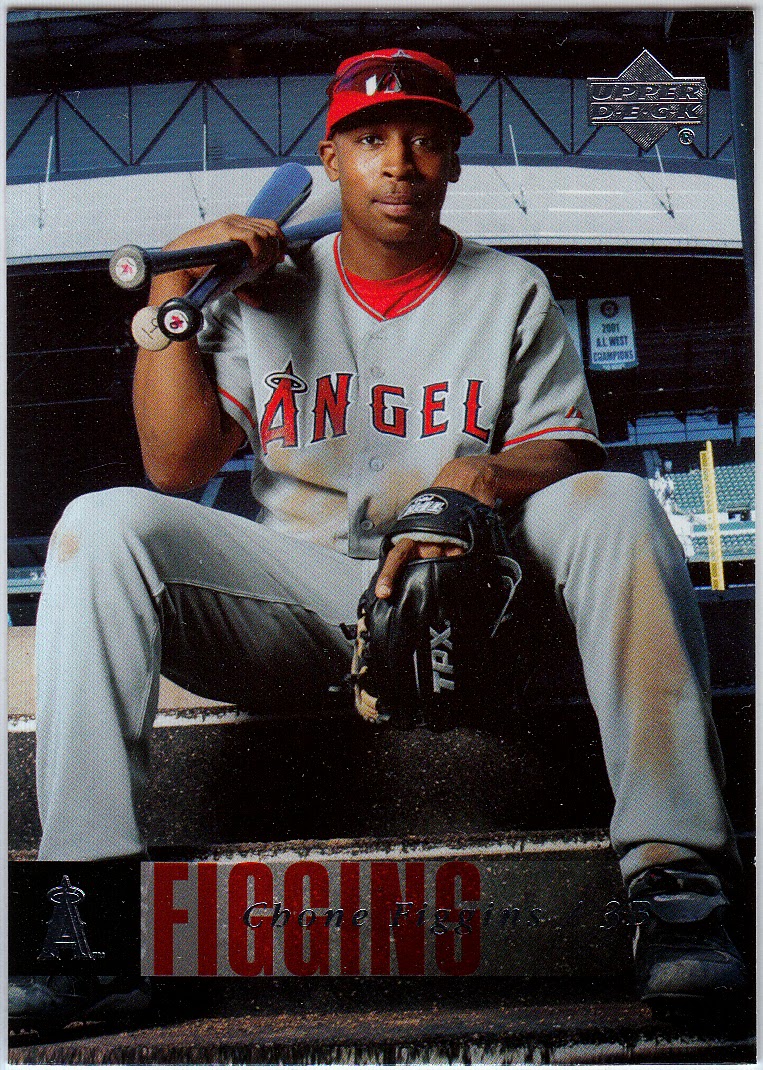 Now this is a baseball player.  Pant leg already dirty, mitt in hand, trio of bats over shoulder, shades atop his cap.  This is a really great card of a pretty nifty player. 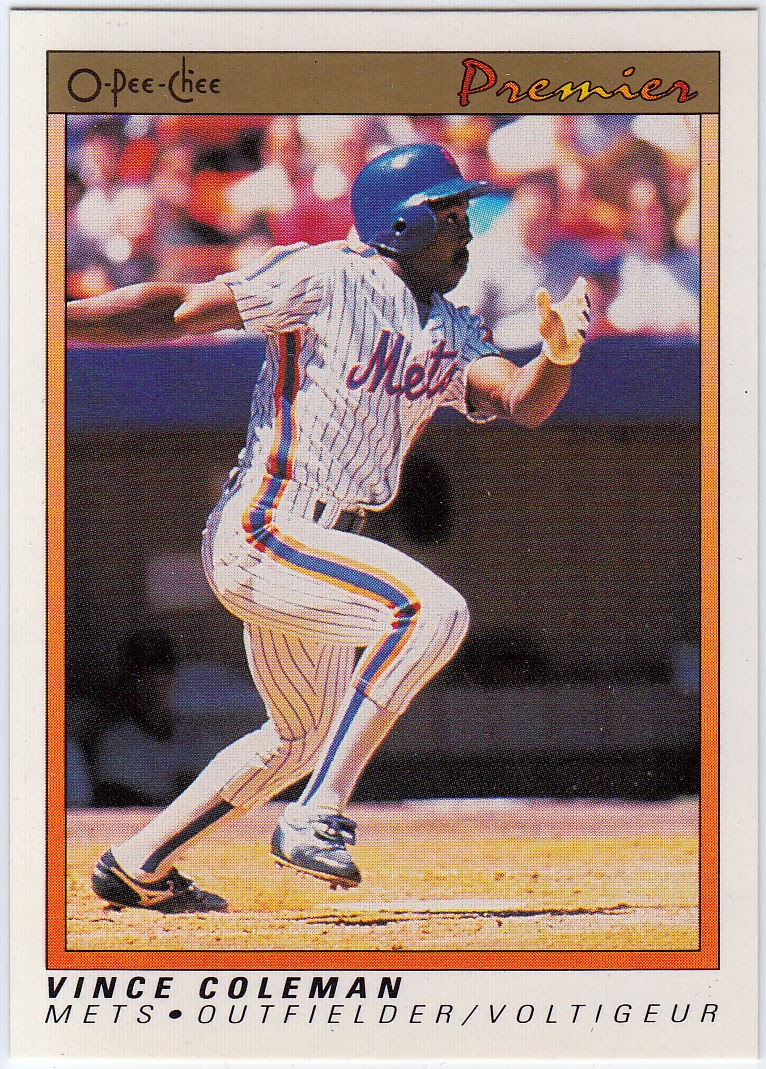 This is 1991 O-Pee-Chee, right?  Kind of an uninspiring design.  They shoulda kept copying the Topps template from the same year.  Other than that, I kinda dig this card of ol' Vince. 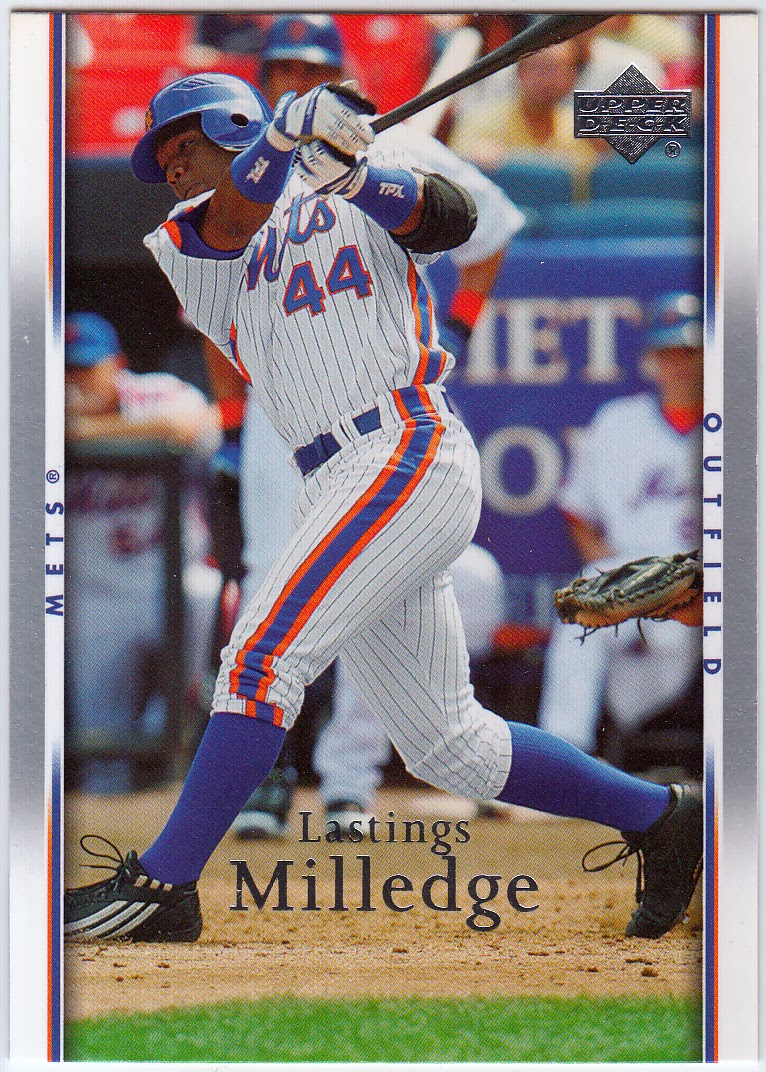 Former top prospect Lasting Milledge is rockin' the 1986 throwbacks on this '07 Upper Deck card.  The Mets wore these unis for one weekend -- I believe -- in 2006 as part of the 30th anniversary celebration of the '86 champs. 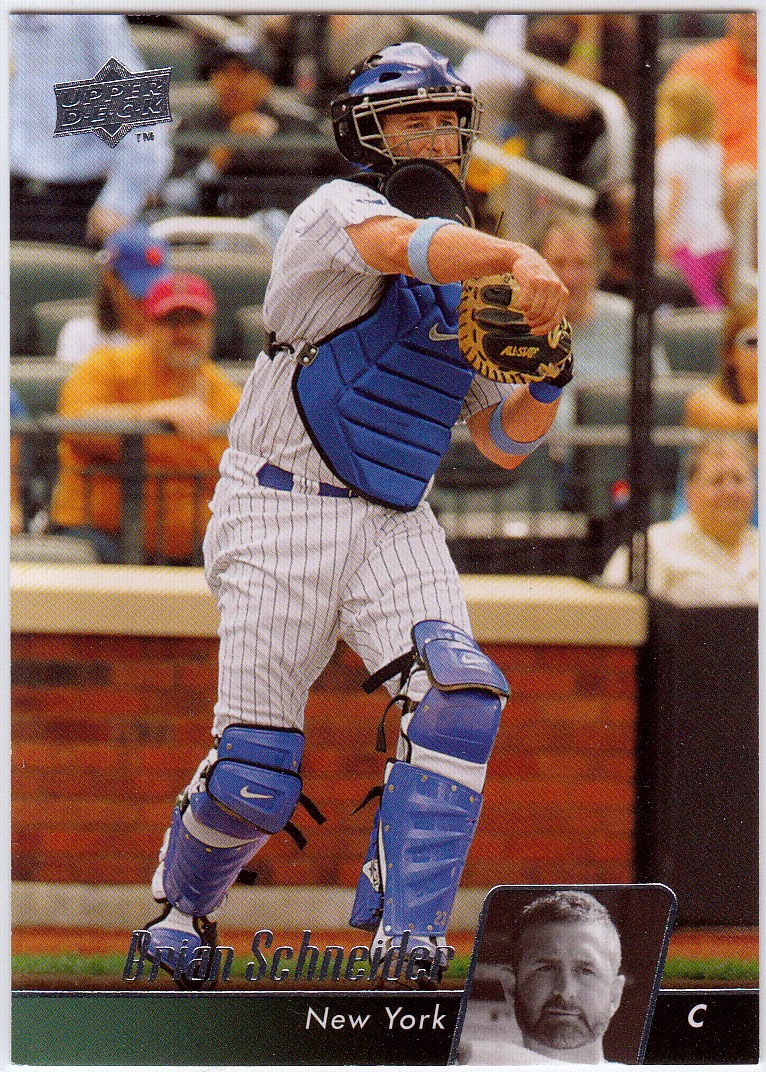 Brian Schneider has a few cards in which he's wearing the goalie-style catcher's mask.  I think this one might need to be included in my All-Time Mets Project.

Section 4: These Will Join the Horizontal Heroes Frankenset 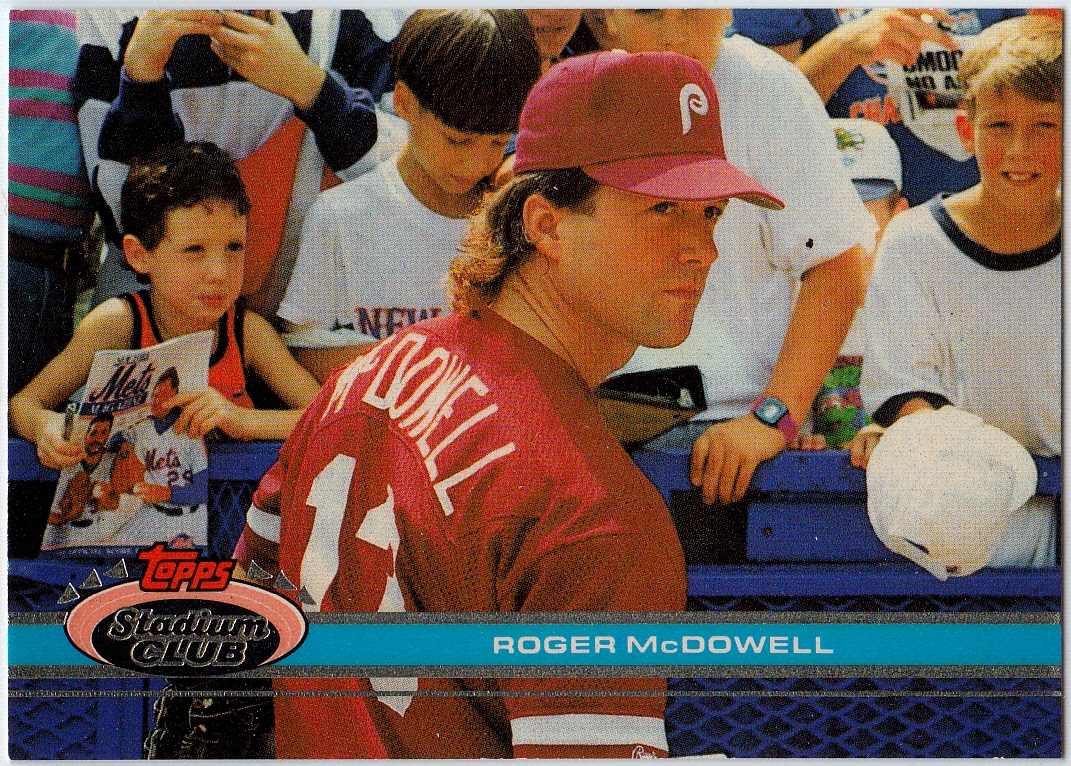 Gotta love the kid with the pencil-thin arms on the left, steadfastly clutching to his edition of Mets Magazine, hoping that 'Rawjah' will sign it for him. 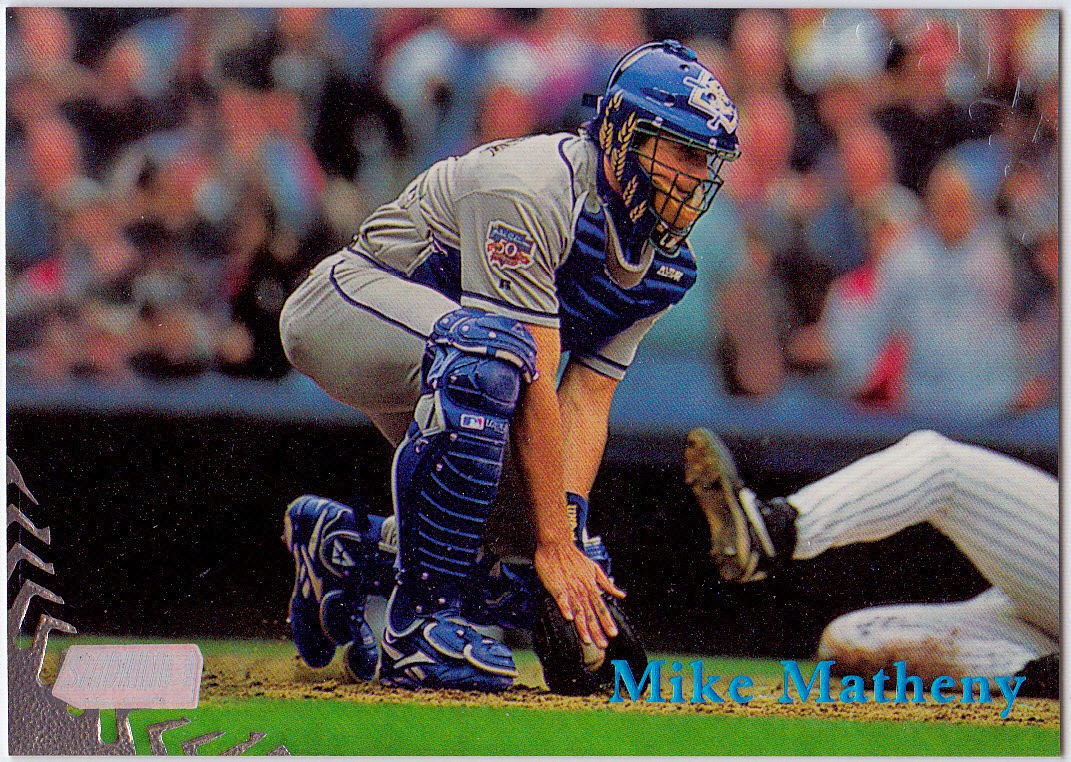 Another one from Stadium Club -- big surprise, right?  Matheny is nicely centered on this play-at-the-plate card. We see a pair of pinstriped legs, but nothing more of the sliding enemy. 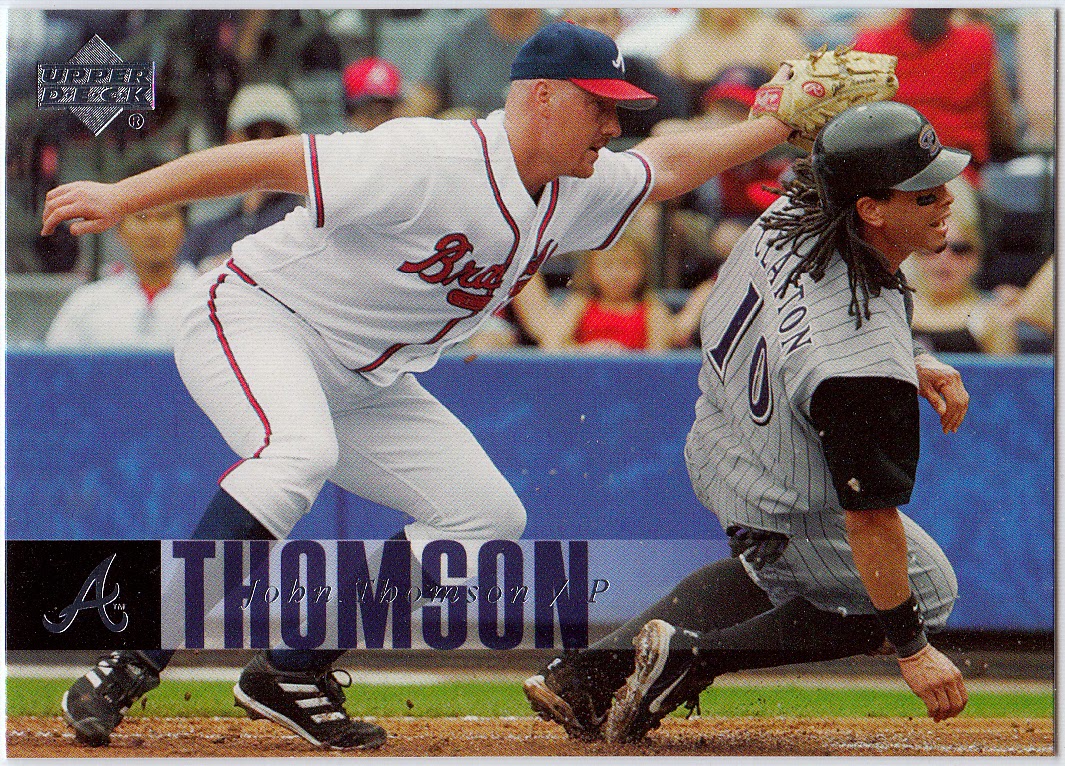 You don't see too many of these types of confrontations on cards, do you?  I guess this is technically a play at the plate, right?  Could that be Royce Clayton that Thomson is tagging?  Was he even still in the league in 2005?  Many questions, but one certainty: This card is a winner!

Oh, and if you've read any of my other write ups about these 400-card boxes, you know they include a relic or auto card.

Here's what I got: 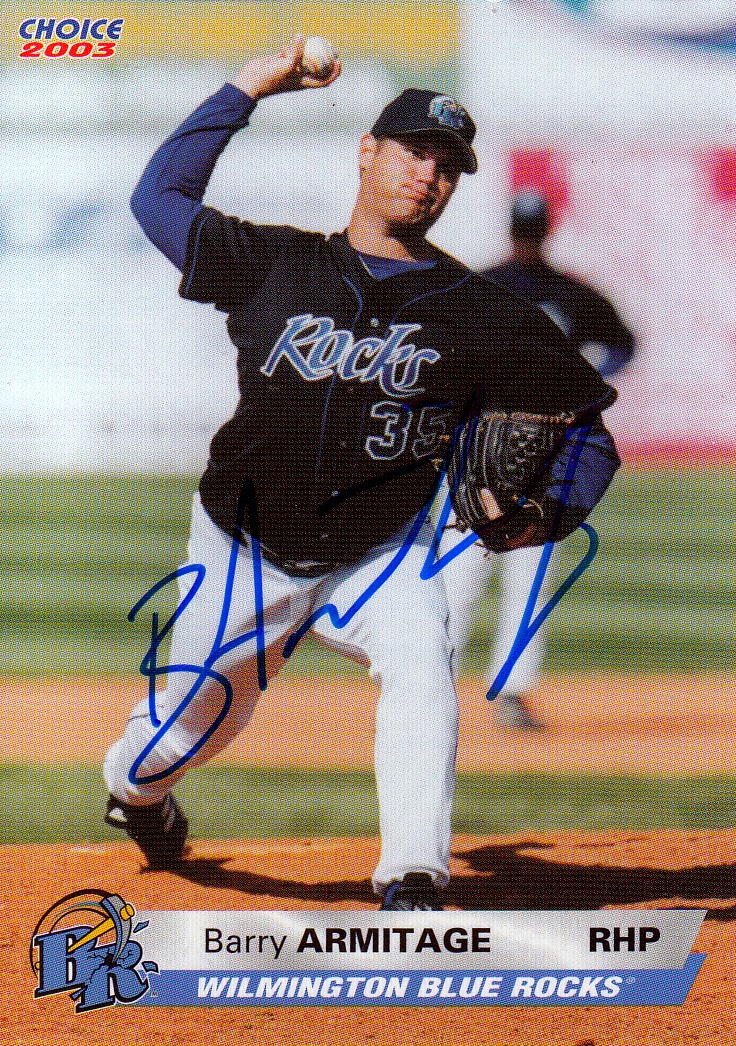 Lame.  First, let me establish that I used to work for the Blue Rocks, and I regularly saw 48-year-old guys with tight shirts and fat bellies push their way past little kids lined up at the railing (go back to the McDowell card if you're having trouble painting a mental picture) in order to shove a pen and a three-ring binder of cards in some unnamed player's face.

And, that's all I can think of when I see a Choice Blue Rocks card that's been autographed.  That's probably a bit too far and quite jaded, but that's what it is.  Anyhow, if anyone wants this thing, I'll happily slap it in an envelope and mail it to you.

Sorry to end on a sour note there.  It was a pretty great box, otherwise.

Happy weekend to all!