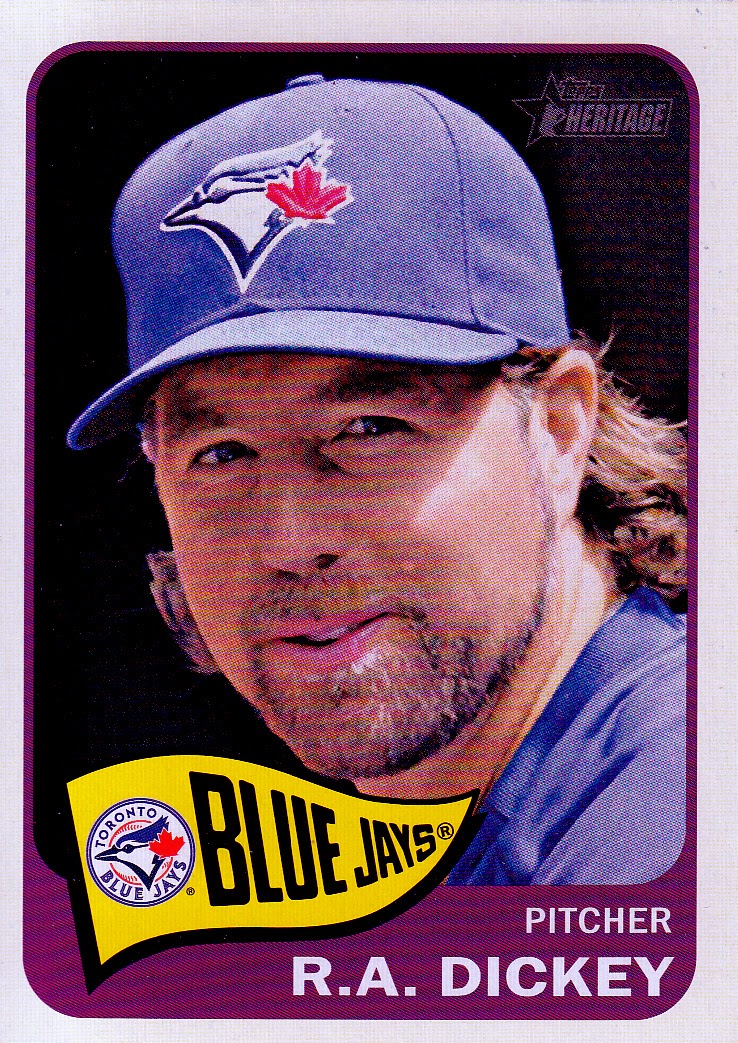 I have four Walmart stores within reasonable driving distance of me.  The first three were all duds, but my trip to the fourth on Sunday afternoon was not in vain.  There were four rack packs left in an otherwise depleted card section, and I swiped them up lickety split.

And let me say, I couldn't be more pleased with the cards.  Other than the fact that four rack packs only netted me on lousy short print--ugh!--the cards are really beautiful.  Beyond the visual appeal that the '65 design offers, the most exciting thing about this year's product is the fact that Topps has allowed the Heritage brand to return to the nice thick card stock--a Heritage hallmark--after a one year hiatus in 2013.  These things are not flimsy, and that's how we collectors like 'em!

The first card I set my eyes on was actually one of those split-player rookies, but I can't begin the 2014 Heritage season with one of those.  So, my first solo player card was the 2012 NL Cy Young winner, R.A. Dickey.  A pretty great way to start!  The former Met was a short print last year, but he's among the regular 425-card base set this time around.

Other cards from the base set that caught my eye: 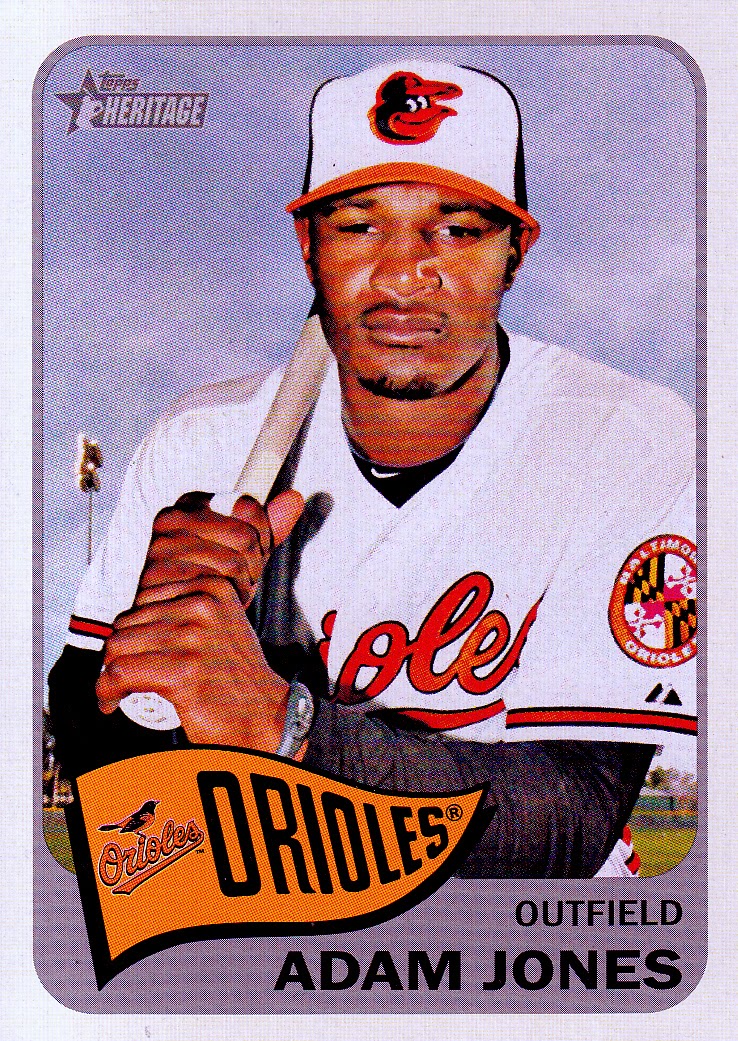 I was originally excited when I saw each of these guys because I assumed--wrongly--that they were SPs.  I guess I forgot that Topps actually put a few star players in the regular checklist this time around. 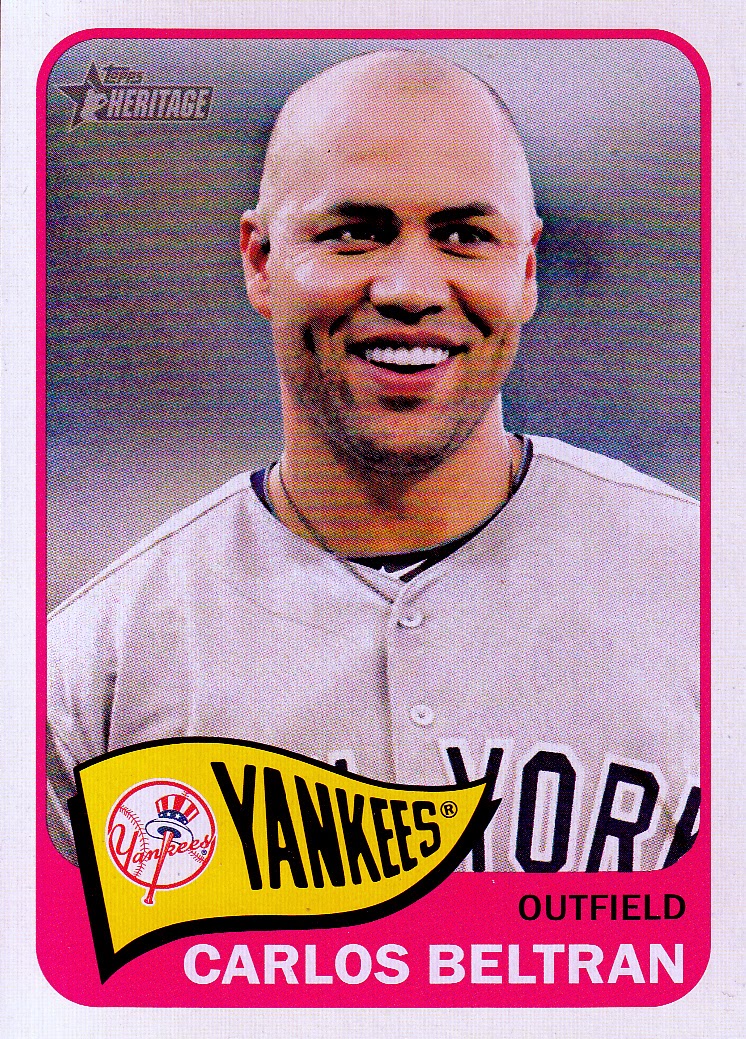 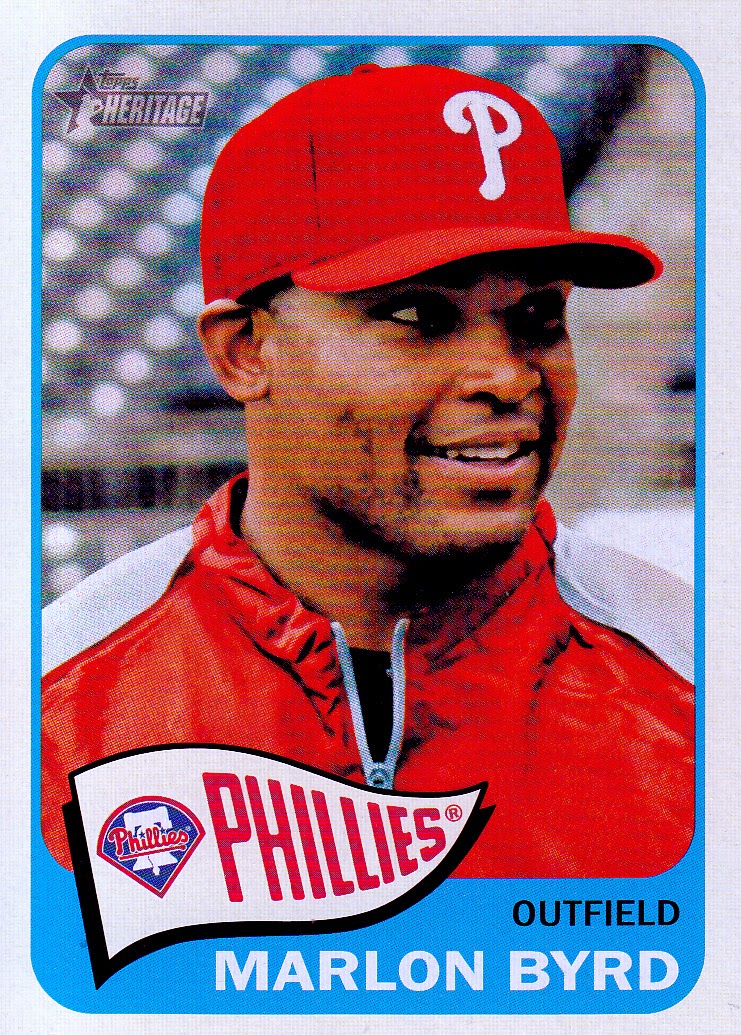 Some airbrushed players.  It's kinda funny that Marlon Byrd cracks the checklist this year when he didn't even get a sniff in the 100-card High Numbers box in 2013.  Well, good for him; I have nothing against Marlon. Moreover, I became a fan of his from his half-season in Queens last year. 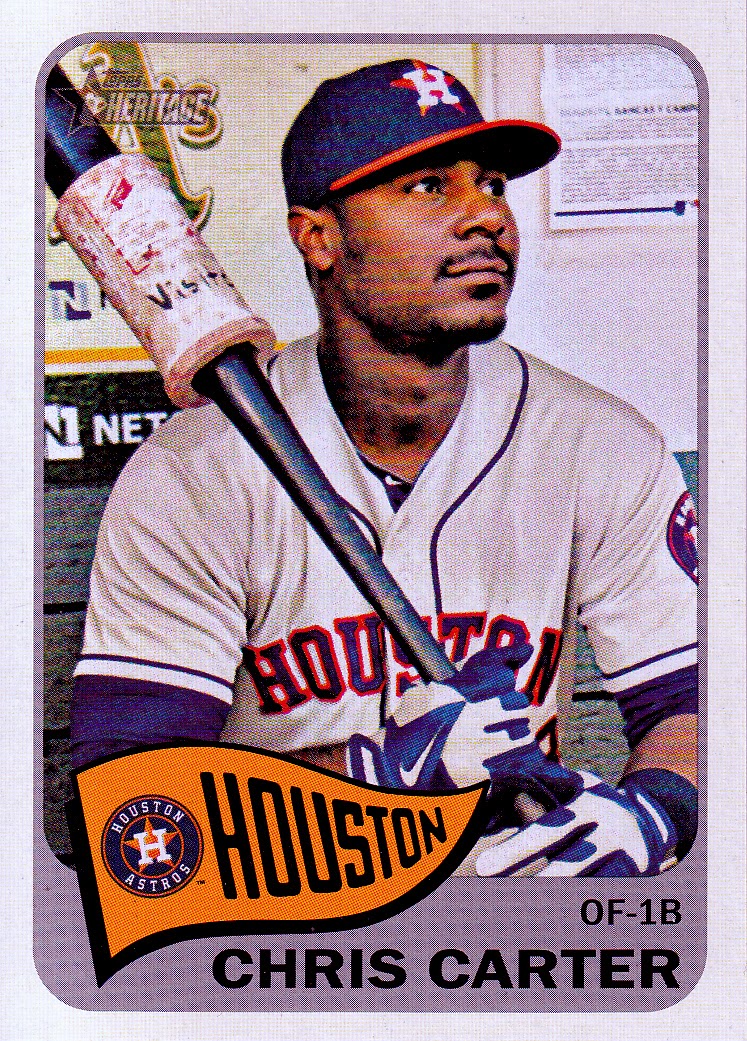 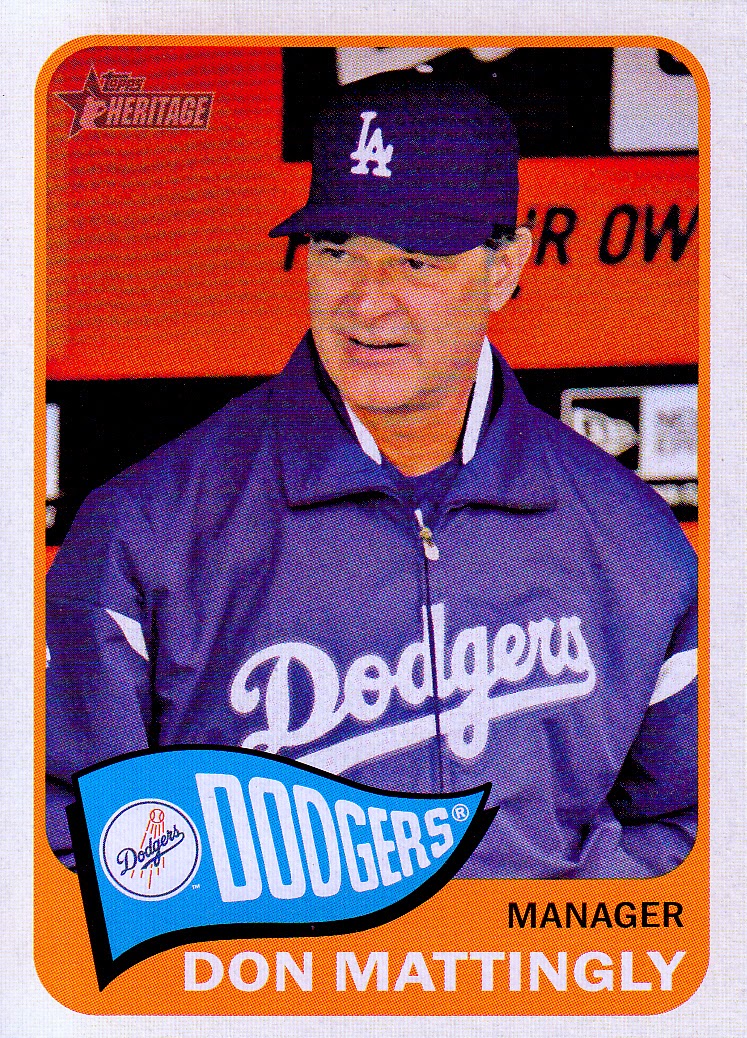 There aren't enough "sitting in the dugout with bat slung over the shoulder...oh yeah, did we mention the batting donut?" cards these days.  So, I definitely like Chris Carter's card.  Also, you may number me among those who prefer to bring back manager cards.  I mean, why not?  When has an extra Don Mattingly card ever hurt anybody? 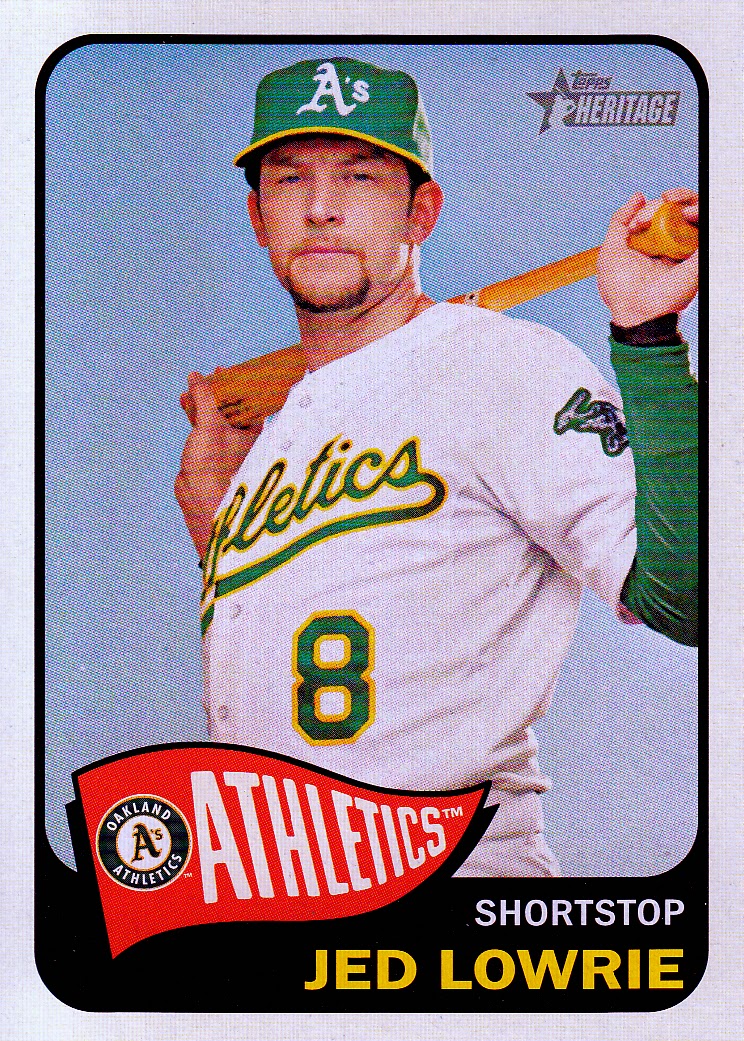 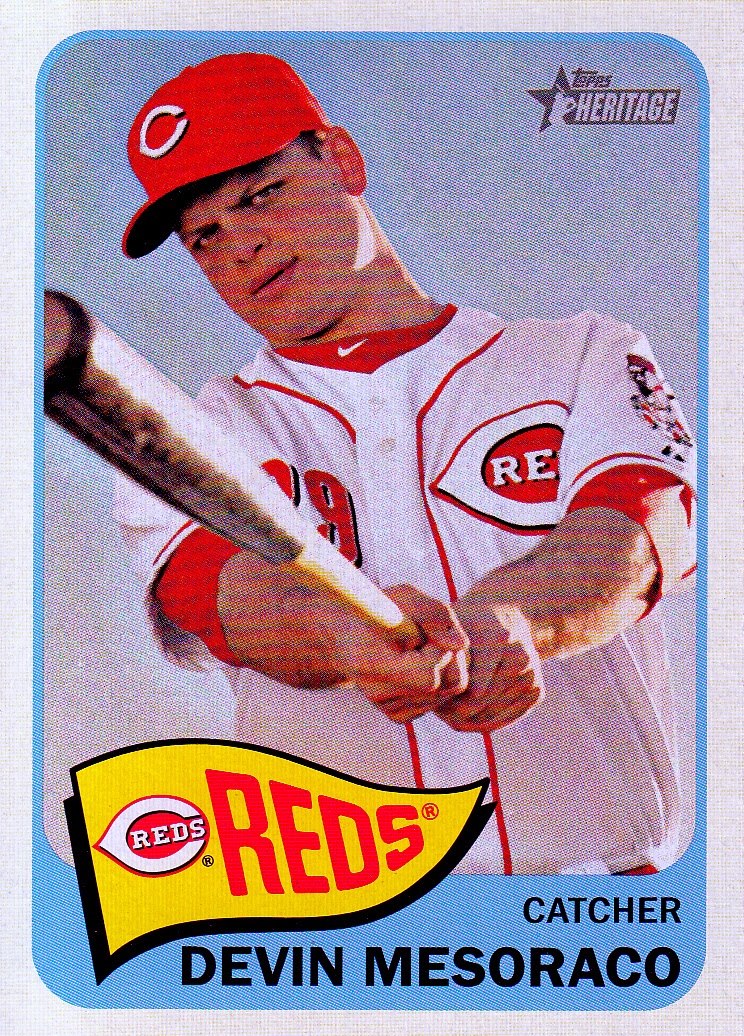 Plenty of blue sky and old-school posed photos with the bat.  Such an old formula, but it still looks as good today as it did all those years ago. 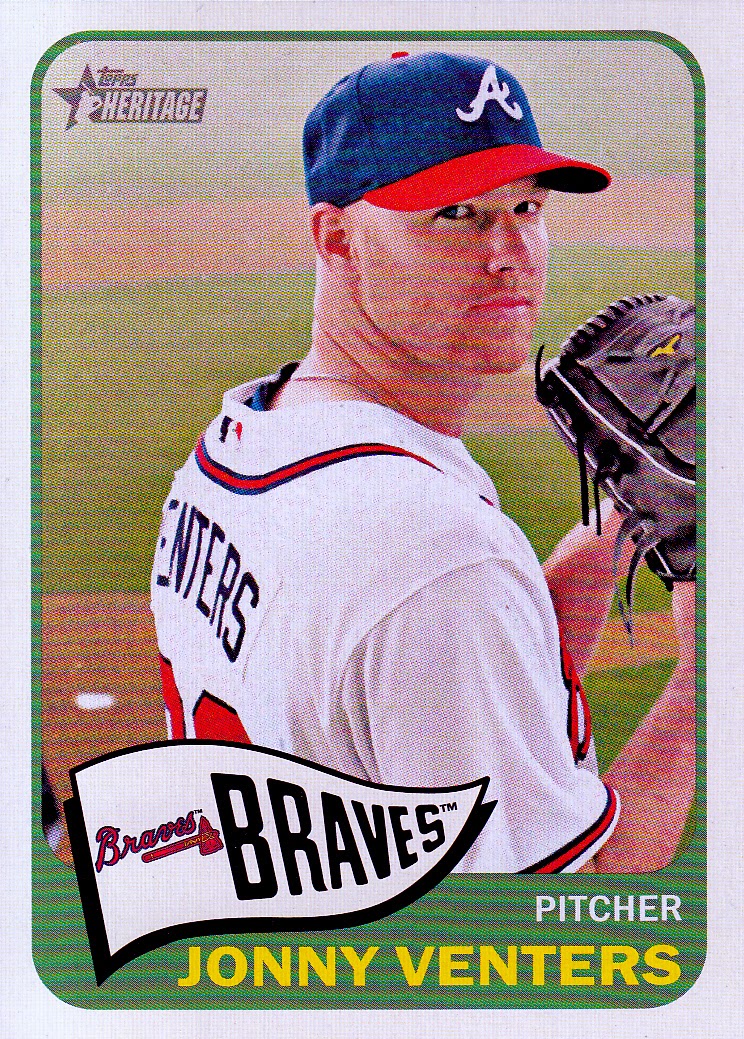 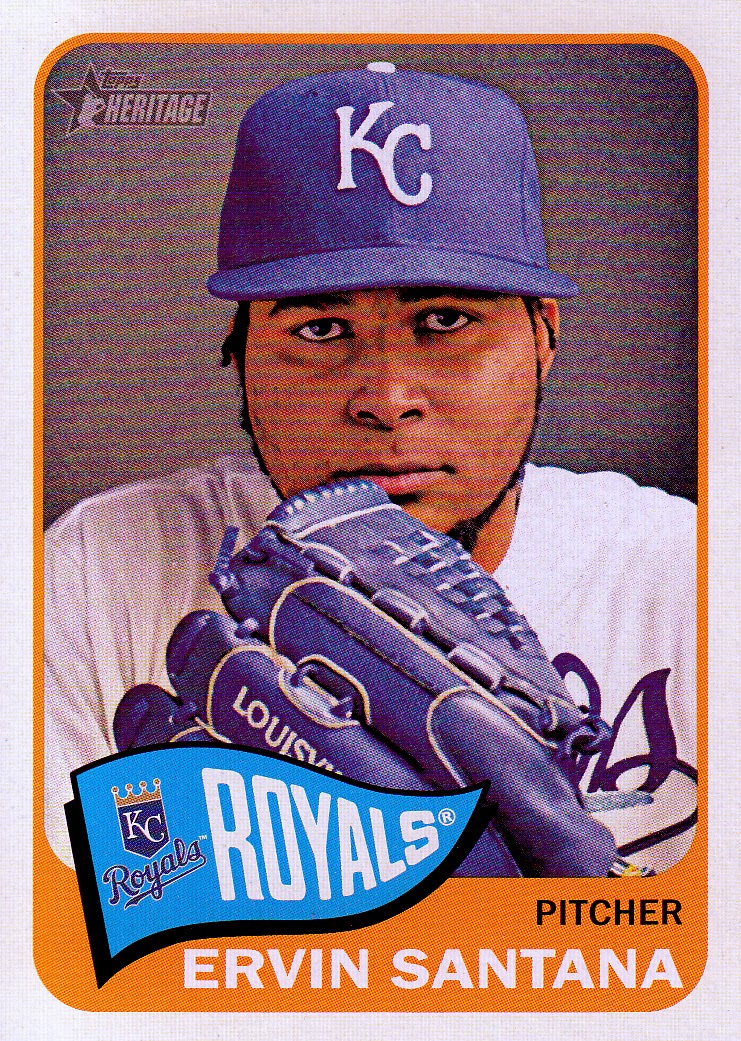 I'm happy to see that the personality and sense of humor that Topps allowed to seep into '13 Heritage has carried over into some of the photo choices for this year's edition.  Why can't we still have cards like this in the flagship set? 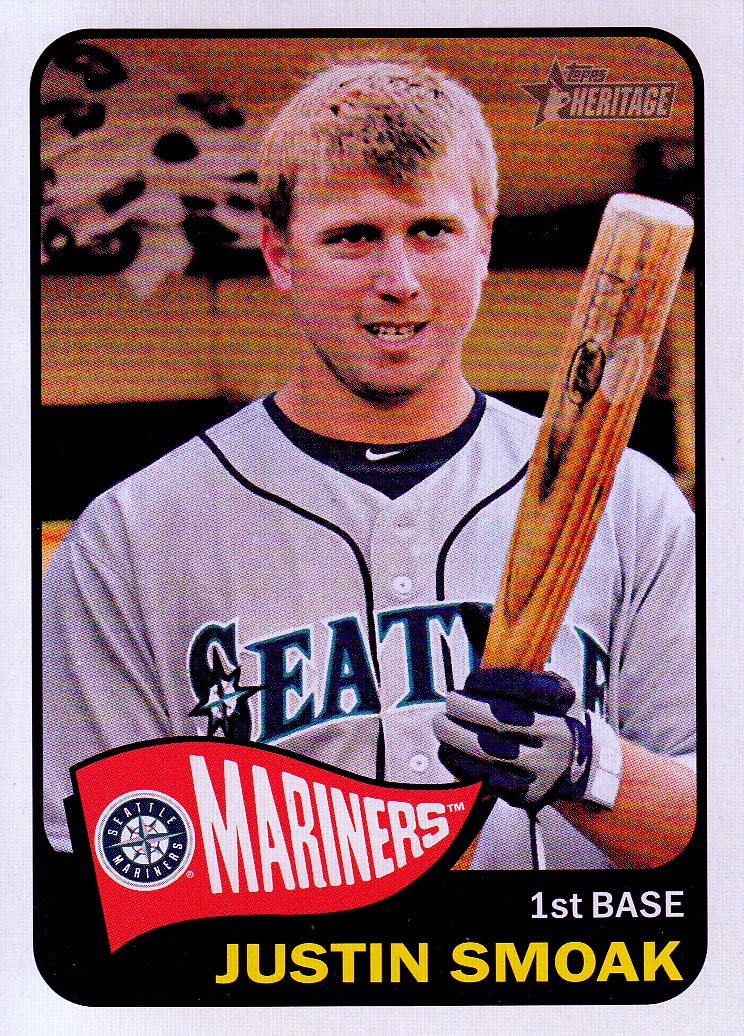 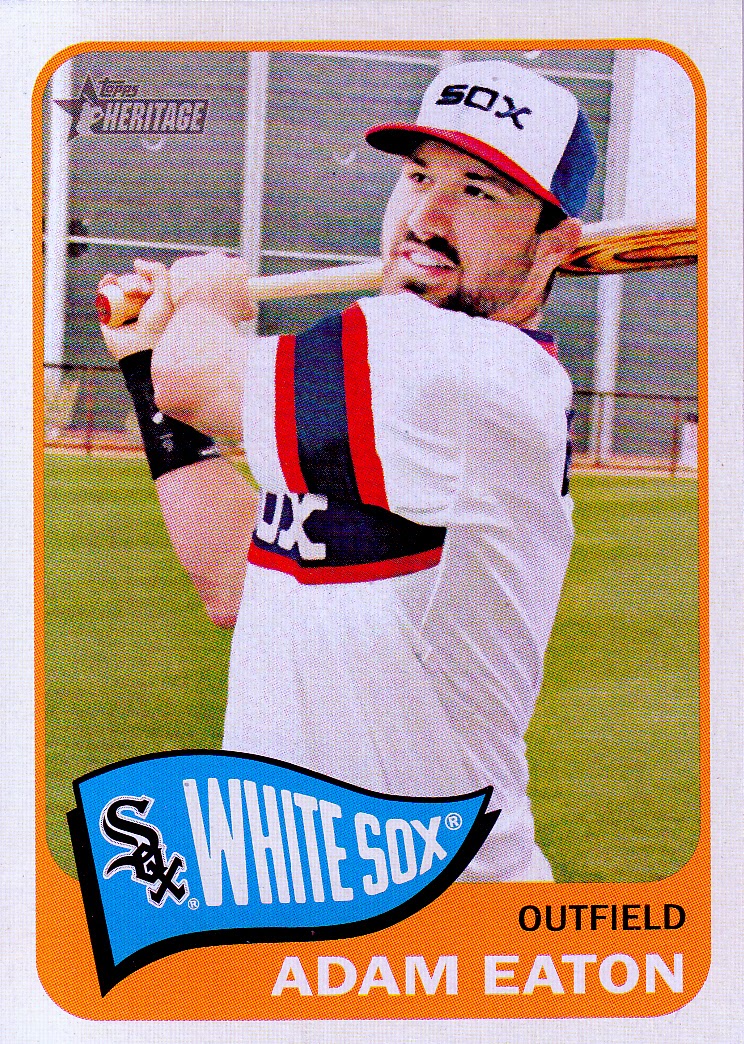 Whether it's a grown man making a monster movie face or a totally '80s throwback jersey, you're bound to find something in this year's Heritage that'll make you smile. 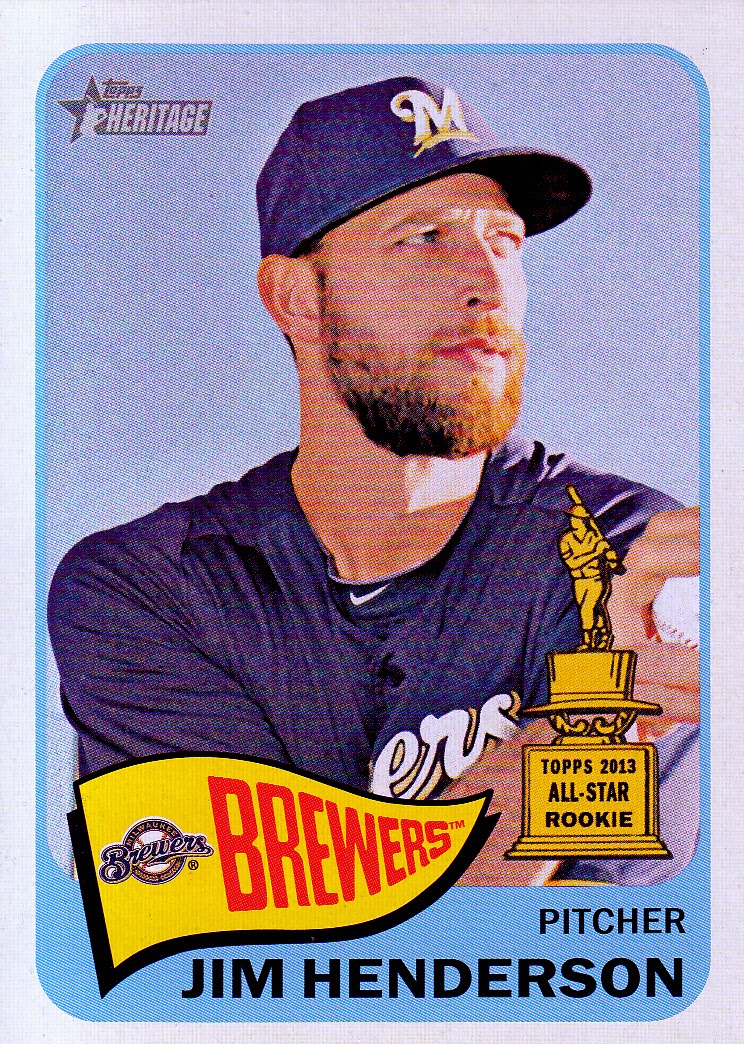 My only All-Star Rookie card from this pack break.  The old-style trophy looks ever snazzier on the '65 design. Man, these cards are great! 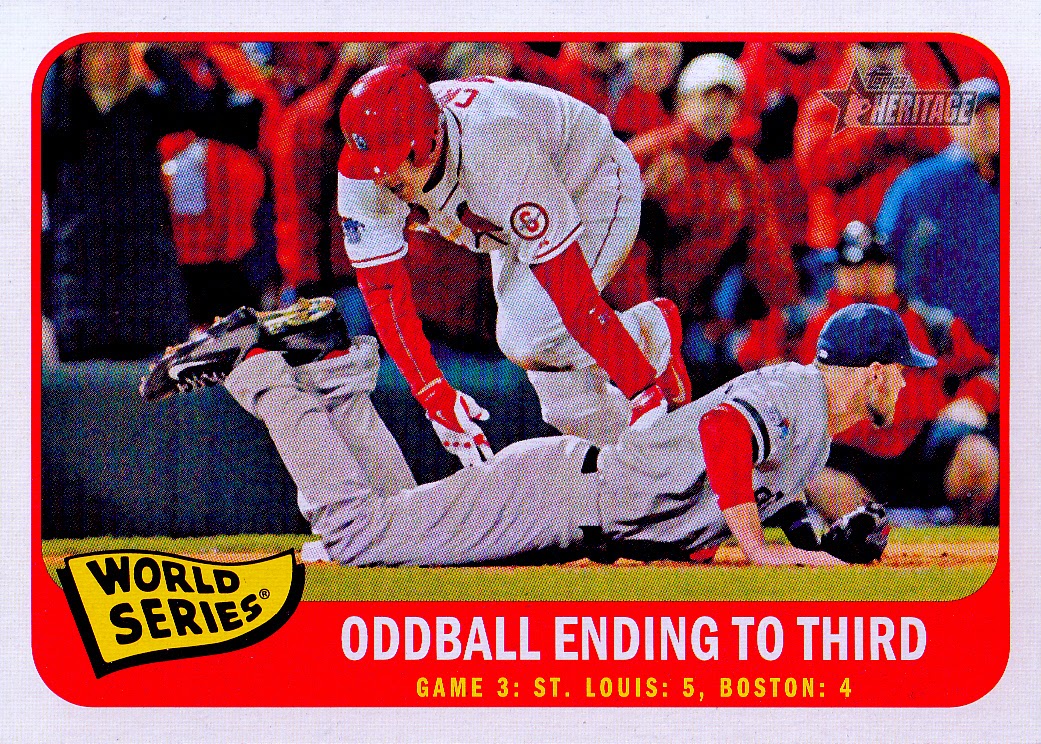 World Series recap cards remain a part of the base checklist, just as they were in 1965.  This is photographic perfection from Game 3 of last year's Fall Classic.  One of the strangest endings to a ballgame, for sure. 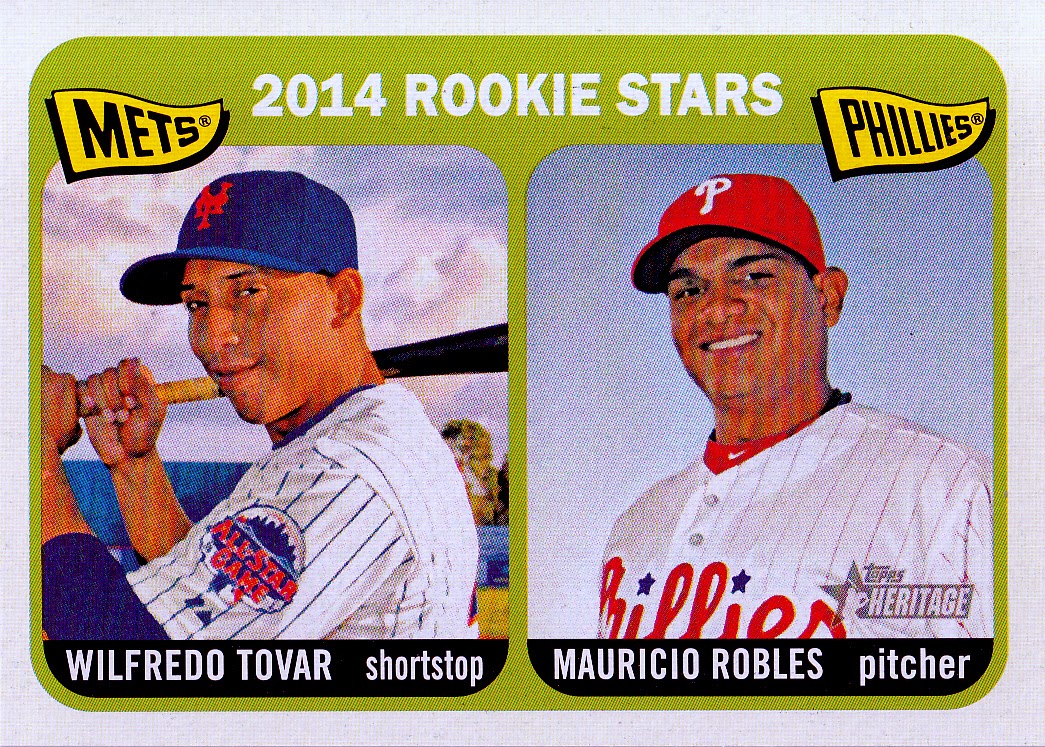 Oh, and this was my only Mets card, if you wanna call it that.  A shame that Wilfredo Tovar's rookie is littered with some Phillies-colored smudge on the right half of the card.  Blech! 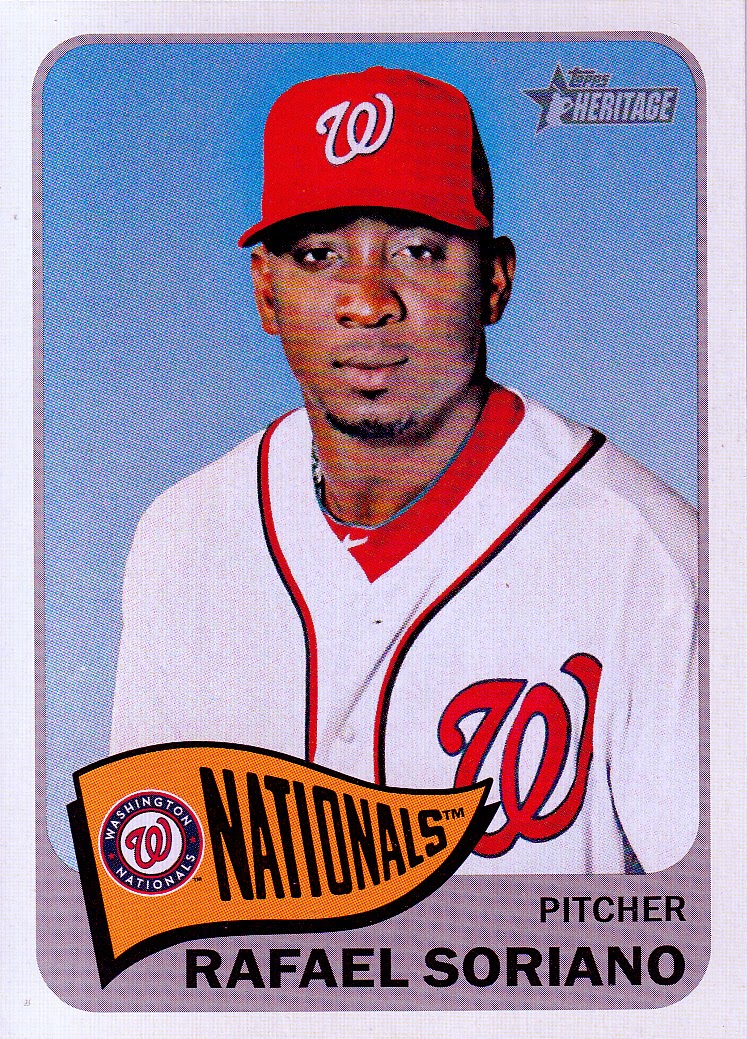 My only short print over four packs was this one, Rafael Soriano.  The stated odds indicated I should have gotten two, but what are ya gonna do?  I should have the luck of this guy, who made out like a bandit on the SP front.

But, considering I was a Grumpy Gus over the past two days without any Heritage, I'm not going to spend a moment bemoaning my luck with odds and inserts and such.  Just happy to have the stuff at last! 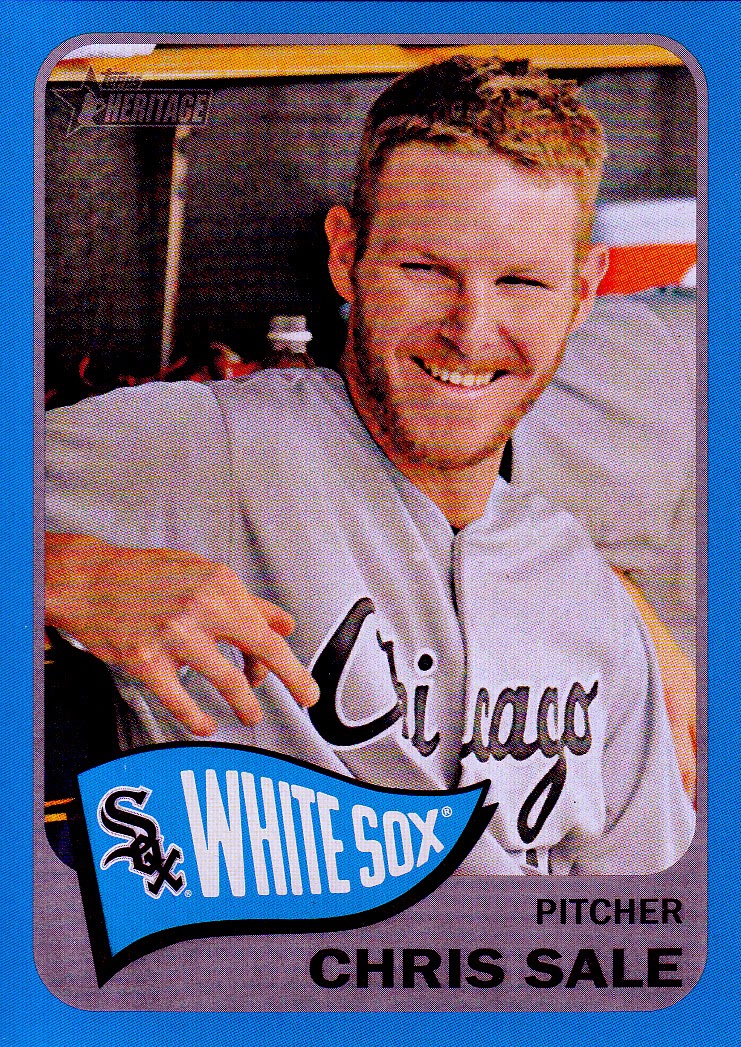 My lone blue parallel.  Right on the odds with this one, as they are seeded one in four packs.  Kind of a kooky picture of the ChiSox ace.  And that is certainly not a bad thing! 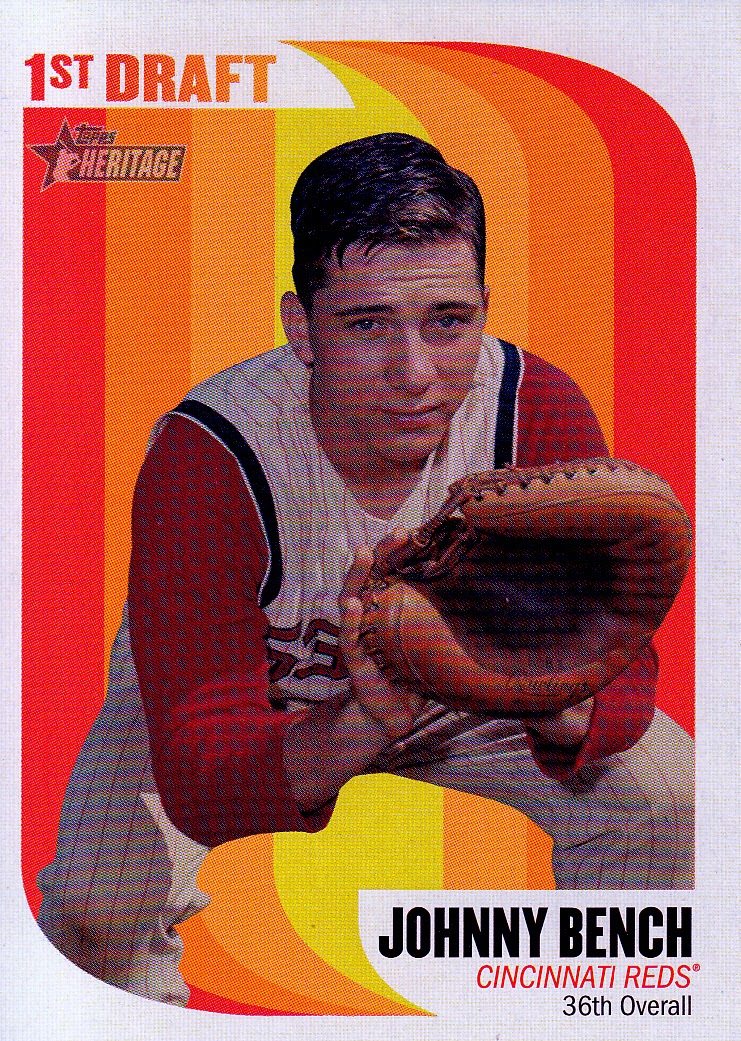 I also managed one of those "1st Draft" cards.  I probably won't spend a lot of time chasing after these, but it's still a pretty neat concept. 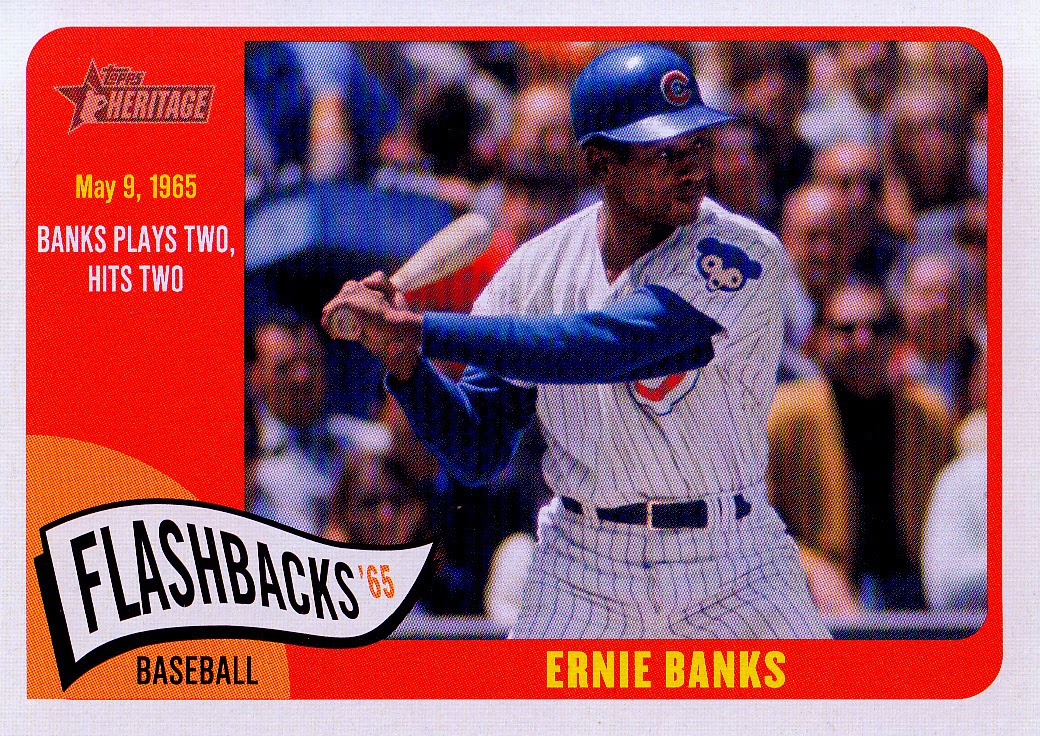 My packs also netted me a pair of Baseball Flashbacks, which have a nice horizontal look to them this year. And they even retain of the lil' pennant that the base cards boast.  Gotta like that!

I didn't score any New Age Performers inserts which was a minor bummer.  I was really looking forward to getting a first-hand look at one of those bad boys.  From what I've seen 'round the blogs and on various other sites, this year's NAP cards are pretty awesome.

But, on the flip side, four rack packs yielded only three dupes.  Considering the poor track record of collation Topps has carried for some time, that's no feat to be taken lightly.

So, we're off and running with the '14 Heritage marathon.  And I'm not the least bit disappointed in the quality of the cards, from their appearance to the way they feel.  It's a home run all around.

Now if only we can get all these freakin' stores fully stocked with stuff!