Small Wonders and Other Delights 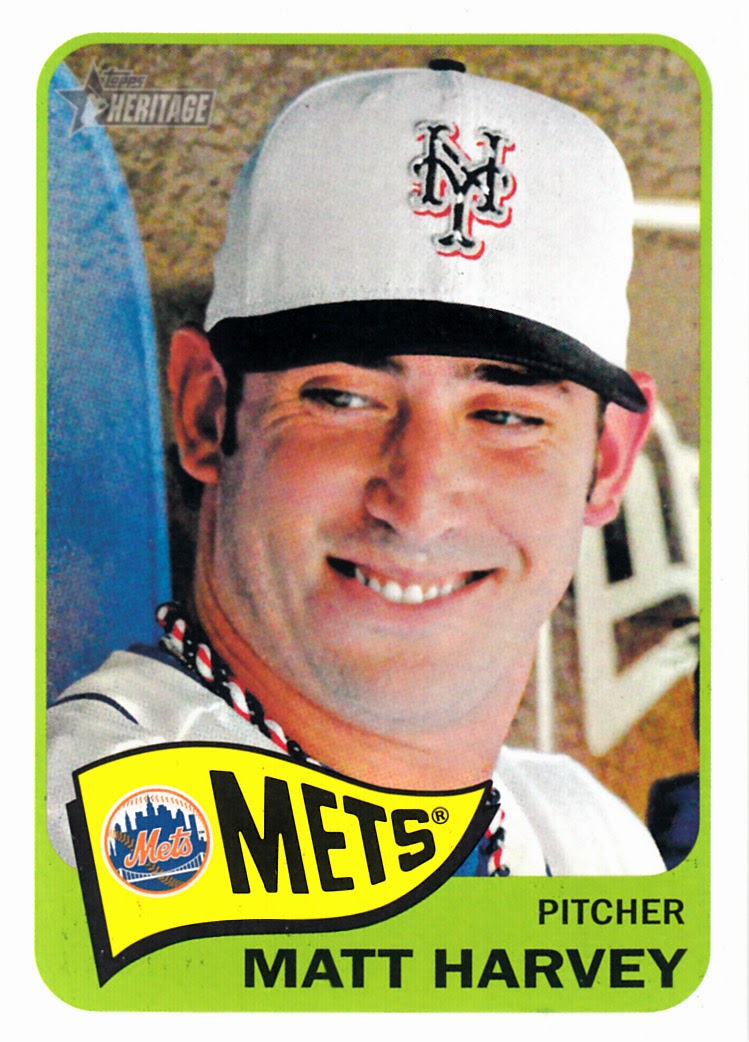 Big shocker, I picked up a few more rack packs of 2014 Heritage yesterday.  Three more to be exact.  The newsworthy item in this case is that these packs came from Target.  It was the first time I saw the new Heritage cards at the Bullseye store.  And, just like their blue-themed cousins, Target only had rack packs; no blasters or loose packs, etc.  Kinda strange if you ask me.

Among the marquee-worthy items from this latest pack break is the above SP of Matt Harvey.  It's the lone short print that my trio of packs netted, but, for this Mets fanatic, it's a damn good one to get!  Sure, it's Harvey, but can you beat that cap?  Great job by Topps! 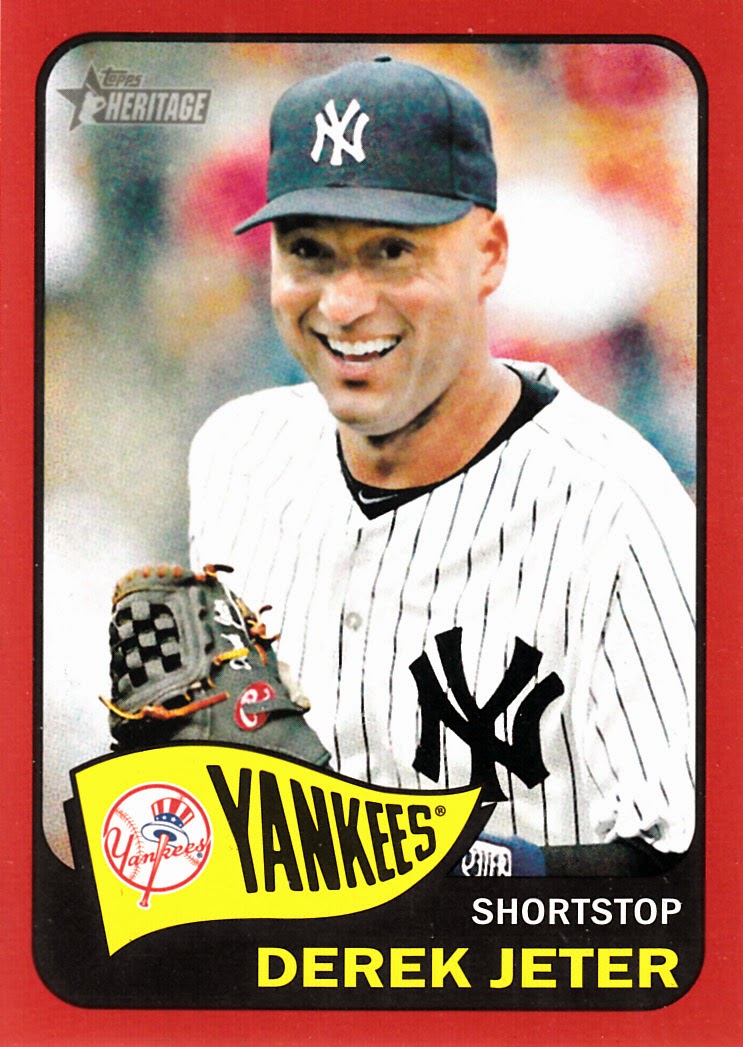 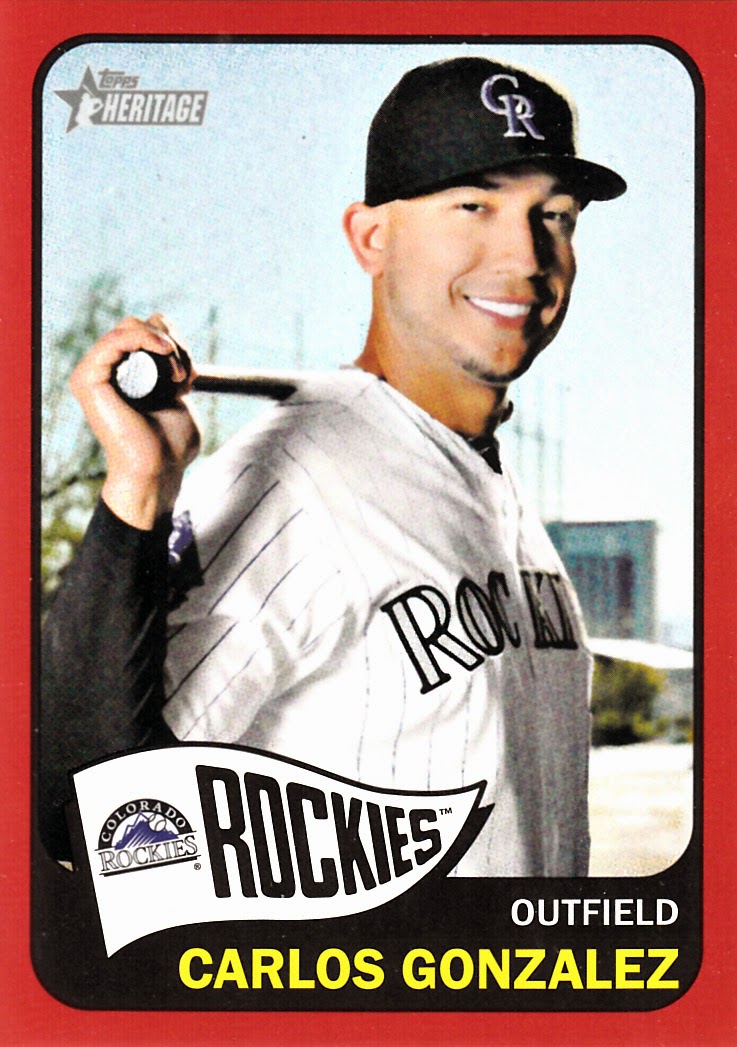 All right, now we're talkin'!  It's no secret that I'm nutty for the colored-bordered variations in Heritage.  Red, blue, black...whatever.  Lemme at 'em!  The odds for the red parallels are stated at 1:4 packs, but I nabbed two in three packs.  The Jeter was an especially satisfying pull since this season will be his swan song (in case you haven't heard a thousand-billion times).

You may be curious about the title of this post, specifically what "small wonders" we might be alluding to... 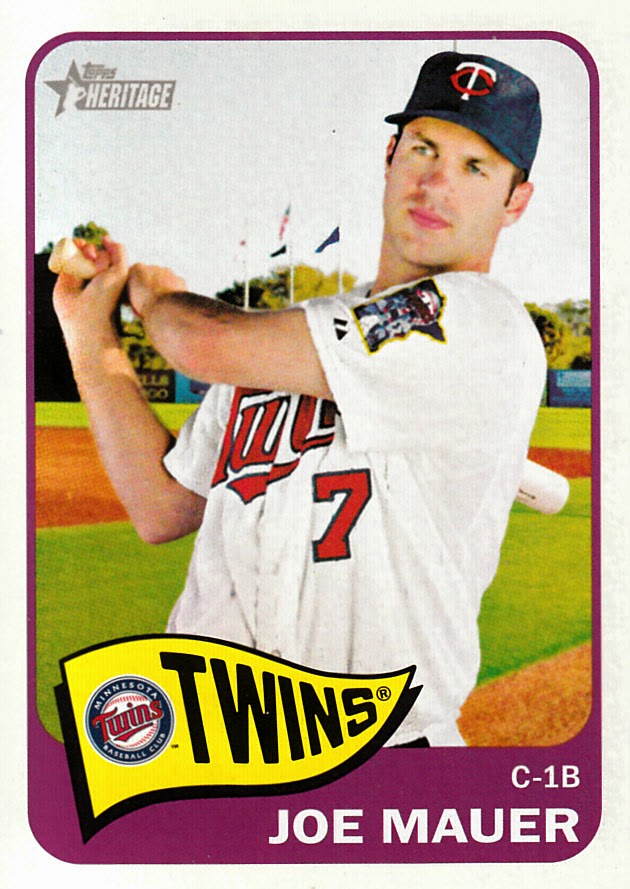 Well, this marks the first time I've been lucky enough to yank one of the "super rare" Heritage minis from a pack. The cards are numbered to 100, and this one is 027/100.  Stated odds of finding one of these in a random rack pack are 1:108. 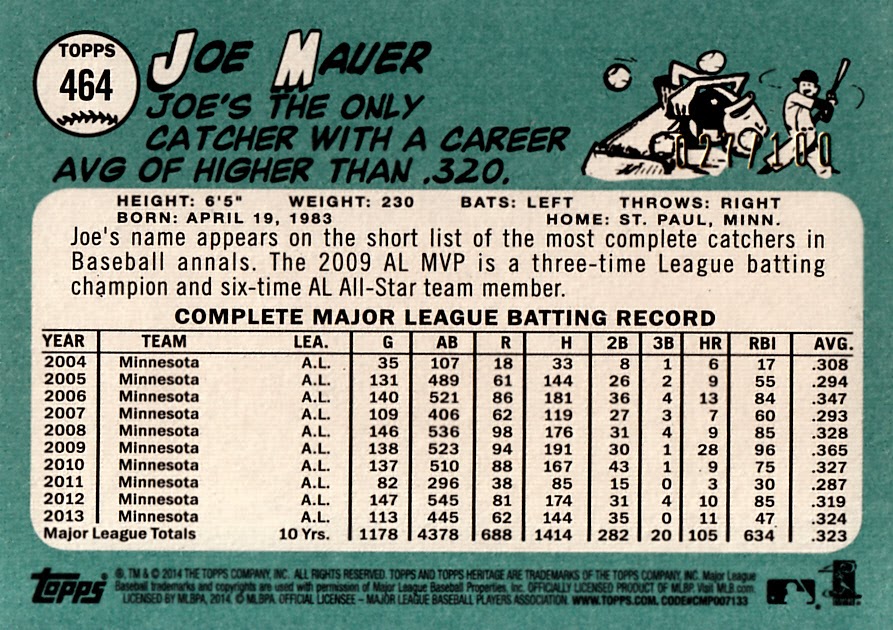 This mini Mauer was definitely a cool and most unexpected find, to say the least.

But, this wasn't even the smallest card from this particular pack rip! 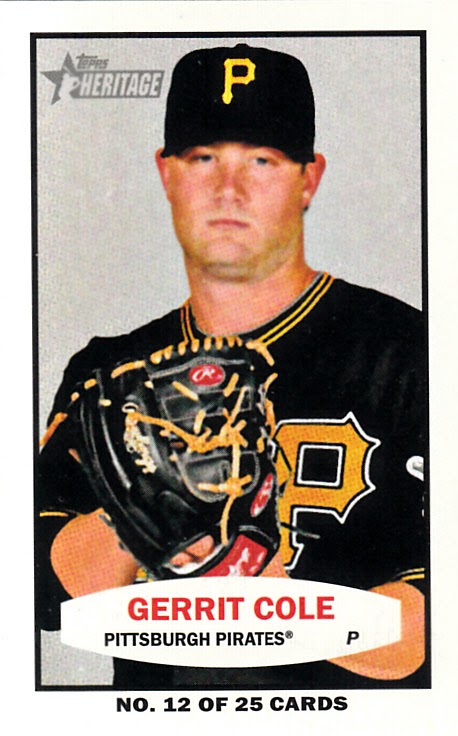 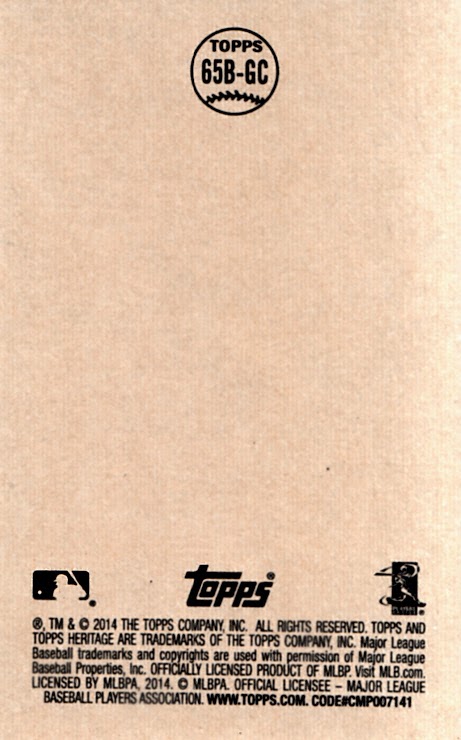 Another pretty tough pull are these '65 Bazooka minis, seeded 1:104 'jumbo' packs.  The 25-card checklist is loaded with all the usual stars as well as the trendy up-and-comers.  I guess Cole would fall into the latter category.  Not the sexiest name I coulda drawn, but Cole does have the tools to be a superstar.

Aside from the three packs, I also did a little bit of eBay shopping.  I was trying to get a Puig short print on the cheap.  I, of course, failed because I refused to cross a certain price threshold.  But, from the same seller, I wound up with a couple pretty good consolation prizes. 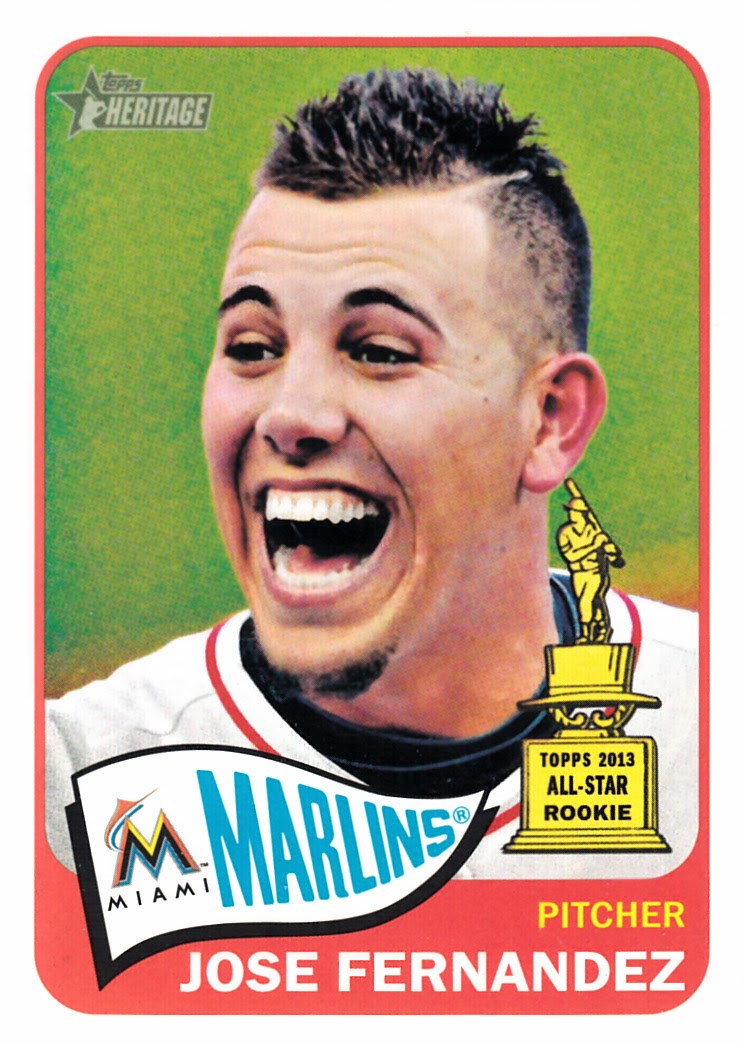 I love this card.  Might be my favorite from all the cards I've seen thus far from '14 Heritage.  The goofy photo choice does a great job of capturing the essence of this young ace's personality.  Plus, it's a rookie cup card and a short print.

And, well, the other recent pick up... 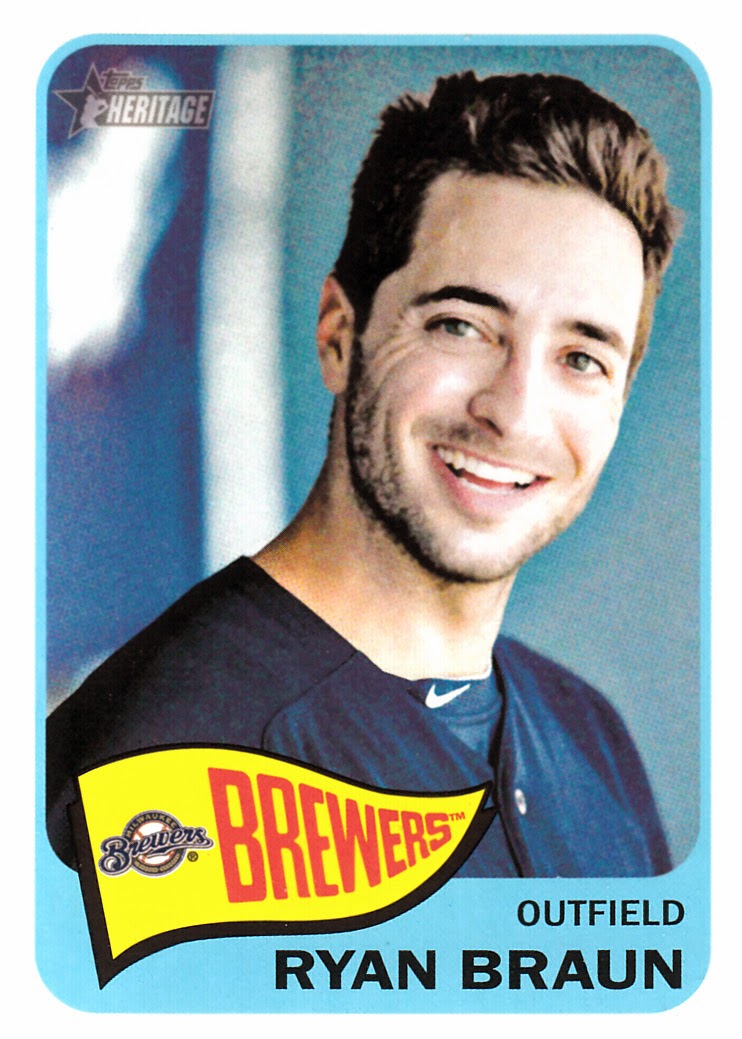 Braun's a piece of the checklist, so I have no choice.  Could Topps have exhibited the decency and better judgment not to put such a person in the short-print checklist?  Yes.  Yes, they could have.  But, it is what it is. At least I don't have to bother chasing after it anymore.