So, you'll note that I've strayed from the "Card Show-Offs" themed title in favor of "Card Show and Tell."  I've come to learn that Dustin from the Vealtones blog has been operating something nearly identical to that for some time already, summing up his card show findings.  He was nice enough to offer the title on a shared basis, but fair is fair.  Plus, I don't like ripping off other people's ingenuity, even if it wasn't intended.

Hopefully, no one is genius enough to have drummed up "Card Show and Tell."  I'd wager against it, since it's a pretty goopy play on words.  But, it has potential.

Anyhow, let's get on with it.  More cards from this past weekend's show.  Time time, I'll focus on a bunch of really neat 1997 Score cards that I came across.  I especially miss Score when I find cards like the ones I'm about to show.  Each set me back a nifty nickel. 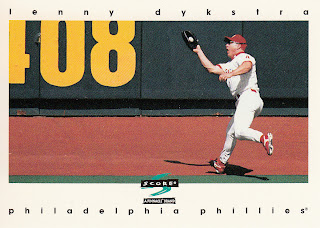 Score's baseball card output from the mid-to-late '90s sure produced some real gems, and the '97 set is a prime example.  Like this Lenny Dykstra card, for instance.  A really fantastic action shot of Nails tracking down a deep fly at the old Vet. 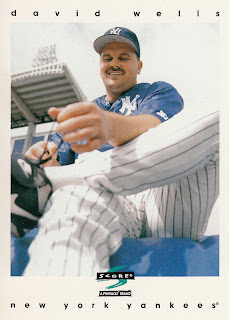 Score was always good for capturing players doing some rather mundane, yet unusually entertaining things.  I can't think of any other cards with a chunky southpaw knotting his laces, can you?  (Well, I'll bet some of you can, but I sure can't!) 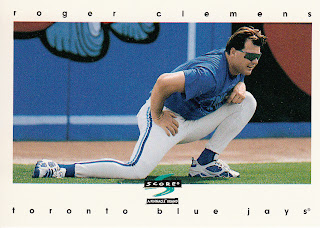 See what I mean about  mundane, yet kooky things?  You don't see a whole lot of pregame stretching activity captured on baseball cards anymore.  It sometimes served well to humanize even the gruffest (or jerkiest) of players.  I hate Clemens and haven't really collected his cards for a while now, but this card was tough to pass. 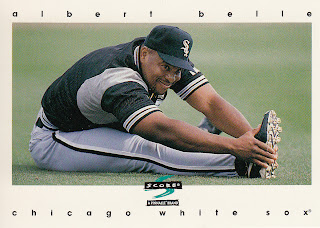 Albert Belle, on the other hand, is a guy I truly enjoy collecting.  So to find an unusual card of the feared slugger is always a plus.  And, for that, you could always count on Score.

I guess what I liked the most about Score is that they didn't seem to take the business of baseball cards too seriously.  That's not to say they didn't care about putting out a good product; rather they weren't afraid to have some fun with it. 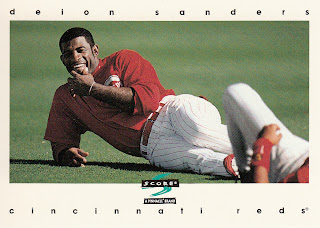 Has a more appropriate Primetime card ever been produced?  Perhaps one that featured him dousing Tim McCarver with ice water would be a more intimate portrait of the man, but this is pretty darn good, too.  Stylin' and profilin'! 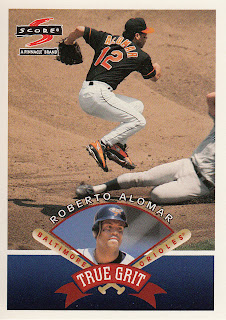 I came across a bunch of these True Grit cards in the nickel box, and this was by far the most attractive.  Great action of Robbie in flight, but perhaps more notable is the classic stirrup and sock combo of the fella trying to break up the double play. 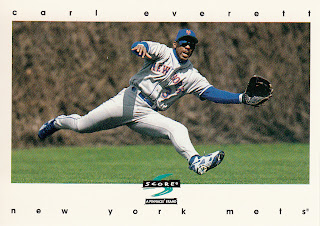 My main man Carl Everett!  I enjoy most any Carl Everett card, but those featuring him in the Blue and Orange are particularly appealing to me.  And this card is cool for a bunch of reasons.  Everett's sprawling attempt at a Sportscenter-worthy catch is nicely centered on the card, but probably the best feature is the drab early-season ivy in the background.  Can you beat Wrigley shots? 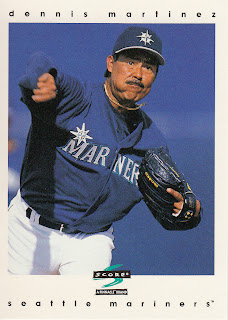 I love me some Denny Martinez.  In a Mariners uniform, to boot!  I don't believe I have any El Presidente cards in Seattle duds. 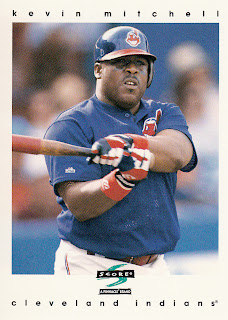 I think this card of the hefty former NL MVP falls into the same category as the Martinez card.  I can't recall any Mitchell cards in my collection in which he's wearing the semblance of Chief Wahoo.

And, now for the pick of the litter.  Truly saving the best for last... 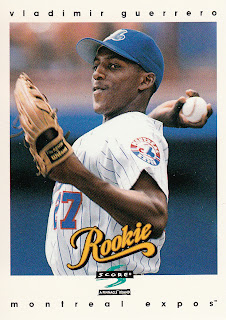 You just can't beat a Vlad Guerrero rookie for 5-cents, can you?  A simple card with a simple design and a simple photo.  But it all makes for an outstanding card.  Then again, I'm biased!

Finding gobs or Score baseball cards from the late '90s at a hobby show is certainly a treat.  To me, anyhow.  It's the type of thing that isn't necessarily on your checklist of things to scout for at a show, but to come across them is a real pleasant and fun surprise.