I'm still in the process of dissecting last weekend's card show purchases, so bear with me for another post or two.

This time around, a bunch of cards from the Topps product that everyone loves to hate... 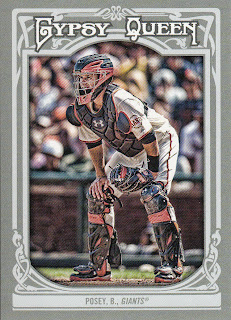 I haven't bought any of the stuff, although I meant to around the time of its immediate release.  Trouble is my local Target didn't have any of the new packs and, well, the urge has passed me since.  I figured I'd be able to take a taste and get my fill and all that jazz at the next card show I attended.  So that's what I did.

Lots of fellow bloggers and collectors don't seem to be huge fans of this card set.  I understand why, but I don't really share a lot of the same venom.  Granted, the design for this year's edition is pretty tough to digest at first look.  And second, and possibly third, too.

But, to me, I view this set like A&G without having to deal with cards of Fuzzy Zoeller, John Stamos and Charles Krauthammer (love ya, Chuck!), and inserts titled "Dudes in Tube Socks".  [Ed. Note: Yes, I took artistic liberty.]  Sure, the design is more obtrusive and drab, but the artistic presentation of the card's subjects is still pretty great.

The Buster Posey specimen above is a good example.  From what I've seen, I have to say this is the best-looking card in the set.  Who doesn't love catcher cards, after all. 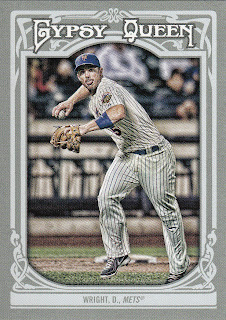 With Michael Jordan tongue action and everything.  Yeah, yeah, it's lots of gray and white and washed out and such.  Still, a great photo that's nicely framed. 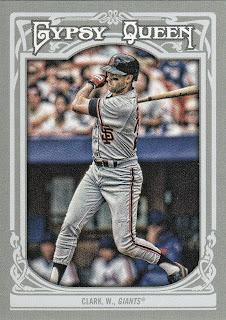 Verrrry nice.  Wiliam N. Clark, hacking away at Shea Stadium back in the day.  I'm plenty happy that The Thrill continues to show up in latter day Topps releases. 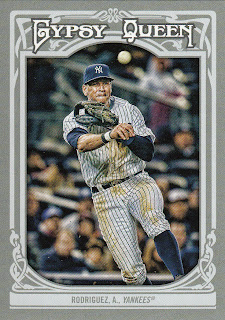 Okay, I understand that you, the guy next to you, and your grandmom all hate A-Rod, but I still collect his cards. I do well to block out all the PED nonsense, weirdo personality issues, and off-the-field circus antics, and try to just enjoy the man's career.  Cos it's pretty amazing to sit back and look at his career stats year by year.  And he does cut a nice baseball card more times than not. 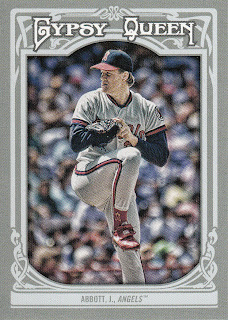 Much respect to Topps for getting Abbott into some of their mixed-generation sets.  The way I see it, he's one of the funnest players to collect in the hobby. 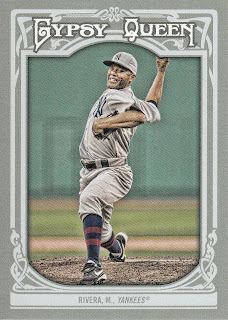 The greatest relief pitcher in baseball history presented to us in some throwback threads, with the Monster looming in the background.  Along with Posey, this has to be in the top five of best GQ cards this year. Amiright?

And we'll finish up with an irresistible card of the greatest fiend in baseball history... 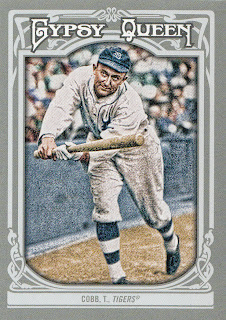 I'm quite certain this picture has been used in other recent Topps releases.  Nonetheless,this photo of this player creates nearly perfect chemistry when fitted within that ill-conceived GQ frame.  Seems fitting.  Perhaps only someone as miserable and misunderstood as Cobb could find beauty in this set?

On second though... Nah!