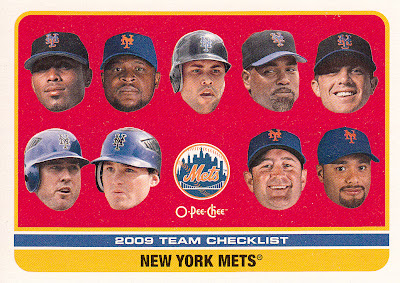 This swell O-Pee-Chee '09 Mets Checklist card comes to us courtesy of a trade with Jeff at 2x3 Heroes.  It was just one of the many terrific surprises included in the yellow  mailer that arrived at the Kaz domicile on Saturday.

Originally, Jeff was going to send me a few 2013 Topps Wal-Mart parallels to help me towards my goal of set completion.  And he certainly followed through with that, chipping me nine Blues (seven of which were new to me), including a pair of good young southpaws: 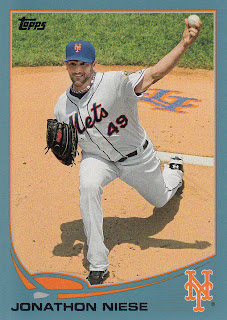 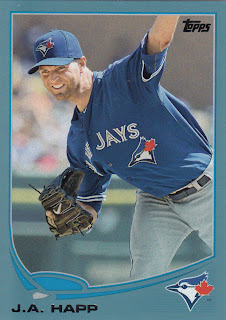 But, these blue parallels were just one piece of the pie, as Jeff treated me to a bevy of fantastic cards for my assorted player collections. 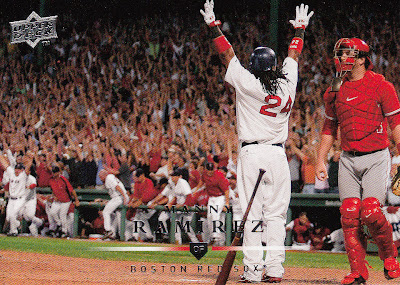 I thought I had already seen the best of the best from 2008 Upper Deck.  Well, I was clearly wrong.  This might be the most amazing base card for any player that I've ever seen.  From any set, from any manufacturer.  Talk about capturing a moment of extreme triumph; of mass jubilation; of...well...Manny being Manny.  Wow! 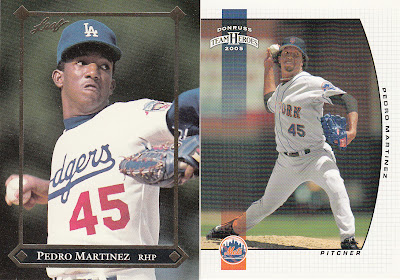 Young Pedro and Veteran Pedro.  The hair changed, as did the uniform, but the jersey number and the blue glove stood the test of time for this future HOFer.  I think the 1992 Gold Leaf Rookies were among the nicest looking rookie inserts of the era. 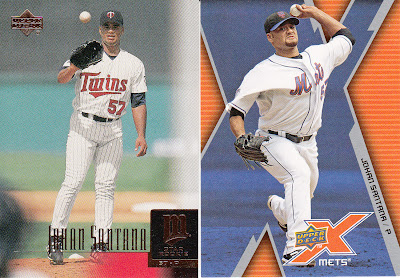 Young Johan and Veteran Johan.  Other than adding a little weight, not much difference between 2001 and 2008 Santana in the appearance department  Certainly not as drastic as Messr. Martinez.  I know Upper Deck X is kind of a weird product, but I can't deny that I love how the orange and blue looks in tandem with the photo on this card. 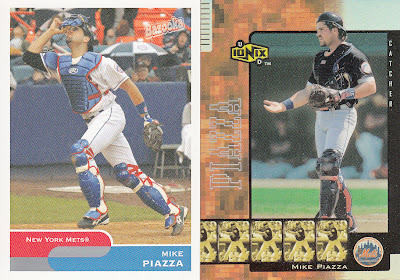 The greatest offensive producer ever to don the catcher's gear.  I sure do miss the Piazza era of Mets baseball. Yes, most of his immortal years occurred as a Dodger, he had a run of three or four epic years in Queens, and helped the Amazins to a 2000 NL Pennant. 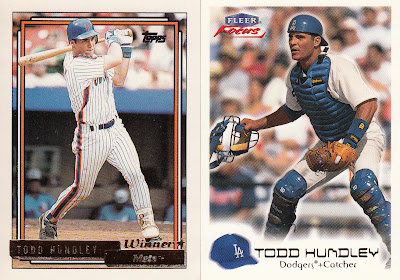 The guy Piazza supplanted in Flushing.  Todd Hundley will always be a favorite of mine, PEDs or not.  He was one tough hombre.  In 1992, Topps introduced us all to the "gold" subset.  I think they broke the mold after this one.  In my opinion, the '92 golds are the best.  This Hundley is from a mail-in redemption type of deal, if I'm not mistaken.  Thus the "Winner" designation. 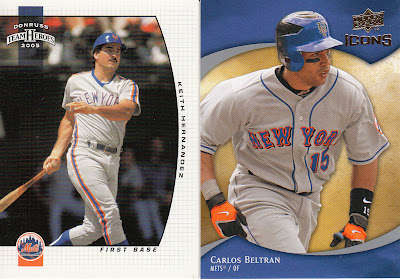 A pair of cornerstones on two of the best Mets teams of all-time.  Keith Hernandez, of course, was an essential piece to the '86 World Champs, becoming the first "captain" in team history in 1987.  Beltran, meanwhile, was an irreplaceable cog in the 2006 Mets, a team that seemed destined for a championship, but ran into Tony LaRussa's Cardinals in the NLCS. 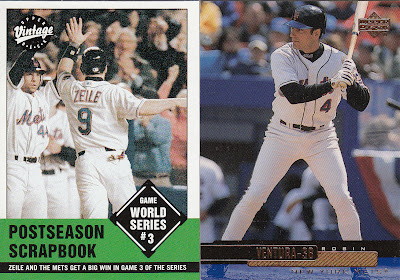 The corner infield of the 2000 NL champs, Todd Zeile and Robin Ventura.  Zeile had some pretty big shoes to fill when John Olerud left for Seattle, but he did a pretty decent job.  As this UD Vintage card reminds us, Zeile was an essential player in the Mets' Game 3 win over the hated Yanks.

A very fun and varied trade package from Jeff, and I'm very grateful for all the goodies.  Our first trade in the books, and hopefully not our last!