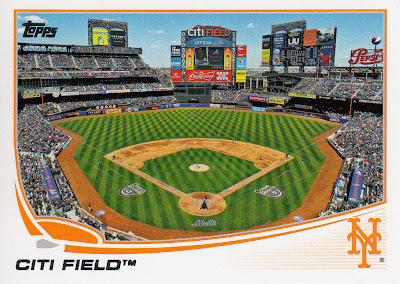 Over the weekend, my travels led me back near my home town, which falls safely into Mets (and, yes, Yankees) territory. En route, I stopped at a normally reliable Modell's Sporting Goods store and picked up the 2013 Topps Mets Team Set.  Strangely, this Mo's location had two rows of the 17-card Mets set and zero of the Yankees.  I guess it makes up -- at least in part -- for the fact that the apparel section was grossly overstocked with every piece of Bronx Bummers paraphernalia you can dream of, while there was barely a Mets cap to be found.  Go figure.

Anyhow, I thought tonight would be a great night to ogle the cards, since the Mets' last two games have been snowed out.  [Ed. Note: To the cities of Minneapolis and Denver: Get a freakin' dome!]

These sets are really great because they A.) feature cards of players not selected for the regular Topps base set or Update set, and/or B.) have alternate photos of some players.

So, away we go with this year's checklist... 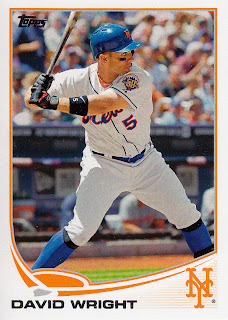 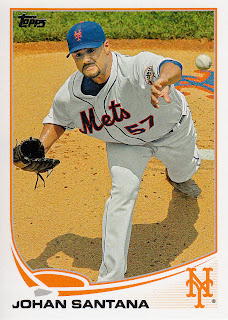 Cards NYM-1 and NYM-2 are respectively assigned to the two figureheads of the team, so to speak.  Neither of these guys has a base card in Series 1, though you might recognize the Santana photo.  It's essentially the same one used for card No. 89, which is a checklist.  Wright, normally a staple in Series 1 Topps, will have to wait for the second series to make his flagship footprint.  Though, he did have a short-print appearance in S1 with one of those Out of Bounds deals.


Boy it feels strange to type this, but John Buck is one of the NL's hottest and most potent hitters on this young season.  Six homers and 19 ribbies for a guy who most considered a throw-in from Toronto in the R.A. Dickey trade.  The photoshopped Buck did not appear in Series 1, but I would have to assume we'll see him in S2. Worst case scenario is a placement in Update.  We shall see.

Both of those cards are identical to their Series 1 counterparts, so I'll spare you the images.


Same deal with the zany Valdespin; he'll most likely appear in the upcoming series.  Jordany made his Topps debut in 2012's Update release. 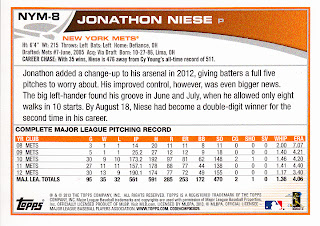 Niese's card is exactly the same as the Series 1 cousin, but I figured I'd at least show the back of one of the cards.  As you can see, the number in the top left is specific for the team set.


Ah, here's a card that is sure to excite the Mets collector, or any collector of fantastic young players.  Harvey is a spiffy 3-0, allowing just six base-hits over 22 innings thus far.  Citi Field might be virtually empty for many a game this summer, but Harvey's home starts are sure to spark some buzz.  Matt's flagship card will surely find it's way into S2 Topps.


I don't know that we'll see Mejia in Series 2 or not, but I'd like to profusely thank Topps for opting to include a card of the prospect Mejia in this set as opposed to a wretched retread like Frank Francisco.


Platoon outfielder Mike Baxter first appeared in 2012 Update, and we'll probably see him in Series 2.  Just a guess,though.  Baxter will best be remembered for his tremendous catch to preserve Johan's no-no last season.

Two more members of the no-name Mets outfield.  Both cards mirror those found in Series 1.


Justin Turner has perhaps the coolest picture of all the Mets players.  A recipient of a Series 1 card in 2012, I have to believe Turner will find a spot in this year's S2 checklist.  Whether or not it'll be this photo will be interesting to find out.

The Citi Field card at the head of this post is NYM-17.

For those keeping score, the following players had Series 1 cards in Mets unis, but are not to be found in this factory set:  R.A. Dickey, Jason Bay, Jeurys Familia, Jon Rauch and Scott Hairston.  All but Familia are in different organizations presently.  Familia, meanwhile, is down on the farm.

Topps, if you're reading , may I make a suggestion?  How about throwing us an 18th card and featuring the team mascot?  Or a HOF player.  Or the manager.  Or anything to allow this set to fully occupy two nine-pocket pages.  Throw us a frickin' bone here, will ya!

Anyways, I'm happy to have found this set, as it's become part of my annual collecting ritual.