A Trip Back Through Time in a Trade 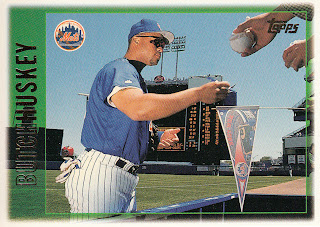 [Ed. Note: Sometimes I astound myself.  I was ready to click "Publish" for a trade post I had just written when my eyes scanned downwards on the list of past posts.  I was aghast to find the italicized word "Draft" electronically jotted next to the very post that you may venture to read below.  For a reason known only to the gods of blogging, I never published this post for others to see  As a result, I must beg Nick for forgiveness.  I don't enjoy standing up fellow bloggers who take the time and care to send me nice baseball card-like things.  So, dear reader, consider this my long-winded way of telling you the following post is well past due.  And, to that I might add, "Whoops!"]

Wellp, he's done it again.  Nick from Illinois (you know him from his terrific Dime Boxes blog) has come through with a insanely perfect trade package.  At once, it hits on a bunch of my collecting weaknesses and also transports me throughout the colorful timeline of my favorite club, the New York Mets.  I've been trading cards with Nick for a while now, and I cherish every opportunity to do so.  Thus, I'm never surprised  by his generosity and thoughtfulness, but I'm always humbled by it.

Okay, sorry about all the schmaltz, but this is a very good group of cards and, well, sometimes I can't help myself.  I'm a pretty emotional guy, what can I say?

Of course, the above Butch Huskey card is a real highlight.  Big Butch signing some baseballs and pennants on a sunshiney day in Flushing.  The hulking, iconic Shea Stadium scoreboard in the background.  You can even see the old Home Run Apple right above Butchie's extra-round fanny.  Buttocks aside, this card captures all those good feelings of baseball and springtime and growing up loving your favorite ballclub. 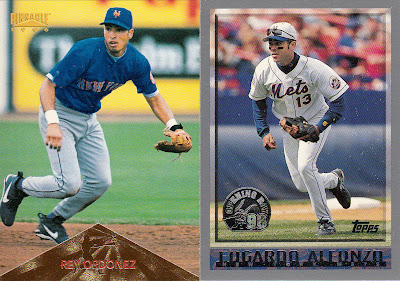 These two guys played with Butch on the mid-90s Mets, eventually forming the best double-play combo Queens has ever seen.  Ordonez's career was way too short, at least as a Met.  I don't know when I'll ever see another player in blue and orange who is as exciting a defender.  The Alfonzo card is brilliant because it features the very rare white alternate cap, which the Mets wore on select matinee home dates in 1997.  One of my great regrets in life (well, baseball life anyways) was not buying one of these caps when they were sold at the ballpark and Sports Authority and every other sports retailer in the NY-metro area.  Woulda been a cool collector's piece. 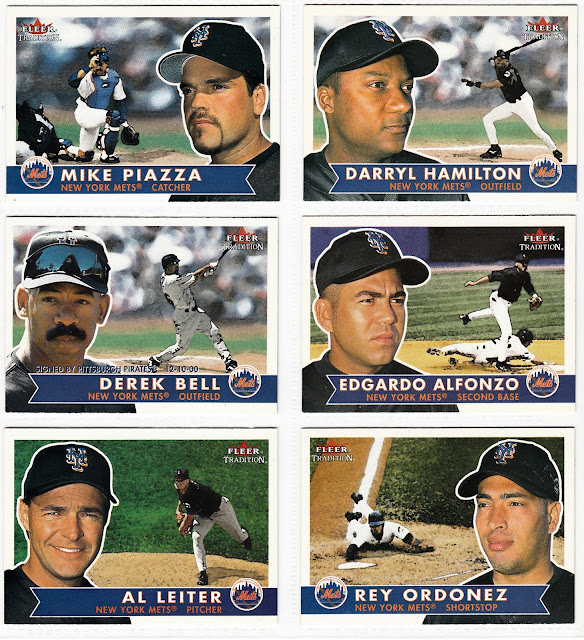 Fonzie and Rey Rey were a couple of vital players helping to bridge the gap from mediocrity to contention in the late '90s and early '00s.  Of course, the trade acquisitions of Piazza and Leiter during the '98 calendar year were immeasurable scores, as well.  They finally put it all together in 2000 to win the NL pennant. These 2001 Fleer Tradition cards are nifty mementos of that '00 year.  I especially dig the backdrop photo on the Rey-O card! 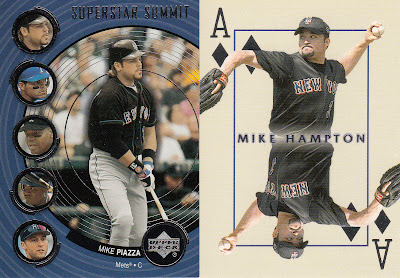 Many of us Mets fans will never forget where we were when news of Mike Piazza trade hit the airwaves and the AP wire.  It was the equivalent of winning the baseball lottery.  Man, to bottle and preserve a feeling like that... Meanwhile, the acquisition of Mike Hamtpon during the '99-'00 offseason was important but perhaps not met with equal fanfare of Piazza's in-season arrival.  Hampton pitched just one year as a Met, yet secured his place in Amazins history with an NLCS MVP in 2000. 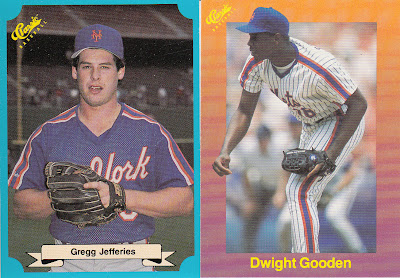 Hope you had the safety belt fastened, because I kinda jerked the time machine abruptly back a dozen or so years from the start of the new millennium.  To the days when Doc was king and Jefferies was thought of as the next Mets superstar to take up the torch.  I always welcome Classic trading cards into the fold, since I didn't really have too many of them while growing up.  I kinda shunned the brand back then, actually, since they weren't Topps (my dad's influence!).  Looking back, Classic kinda epitomized the "overproduction" or "junk wax" era.  Everyone was trying to get a piece of the pie and cash in on the baseball card craze.  Nonetheless, the present-day version of me enjoys these. 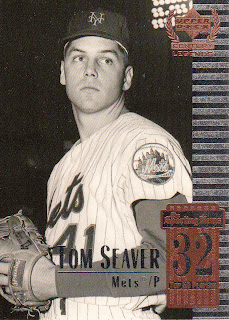 Oh boy, here we go.  When you see Tom Terrific, you know the trip backwards in time is about to get very fun!  To the days when the Mets took the world by storm, rocking the baseball landscape with the most improbable World Series title in history. 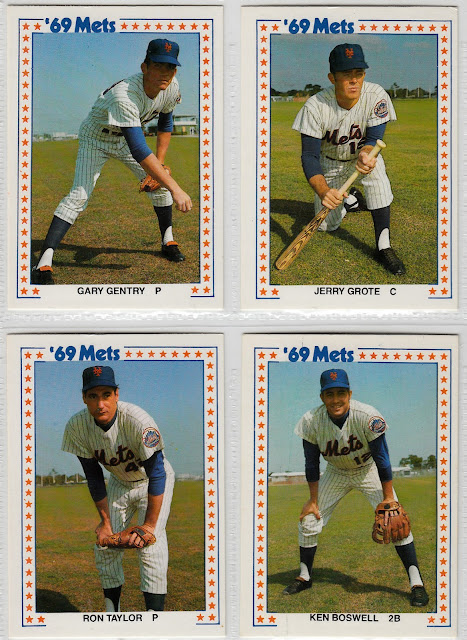 The '69 Mets, I guess, can only truly be appreciated by those who lived through it.  I was born 11 years in the aftermath, so I can't be counted in that category.  Thus, reliving the time and the games through video, stories from my dad, and, of course, baseball cards is as close as I'll ever get.  And ya know what?  It's still almost too unbelievable!  The above are from a 1987 product called TCMA.  I found a couple similar cards at a show earlier this year, but Nick has filled in the blanks with some more outstanding pieces from the set.  Sure, most of us know about Seaver and Koosman and manager Hodges, but the Miracle Mets were a TEAM in the truest sense.  Thus it's extremely cool when some others get well-deserved limelight.

These three panels are from a 1993 set Upper Deck produced in conjunction with B.A.T., or the Baseball Assistance Team, which aided members of the baseball family (former players, coaches, umps, team employees) in need.  Pretty great cause.  And super cards, to boot!  I have never ever seen these elongated cards before, but man they are freakin' awesome!  The absolute stunner of the group is the Agee up top, as we see him in full-sprawl to make one of the biggest catches in Series history vs. Baltimore in 1969.

Allow me to push our time travel back to present-day, will you?  And one final -- and tremendously important -- piece of the Mets franchise fabric. 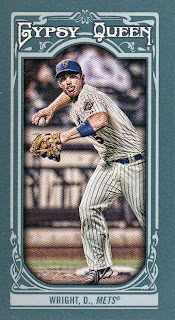 My first GQ mini of the 2013 collecting season!  The captain, David Wright.

Before we part company, I should mention that Nick's card selections weren't limited to just Mets... 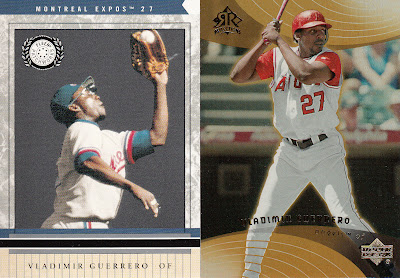 I don't know if anyone has more Vlad Guerrero cards than Nick.  The upside of that as it pertains to me is that he gifts me a good number of his extras.  And I happily accept them into my growing collection of Vlad's cardboard. 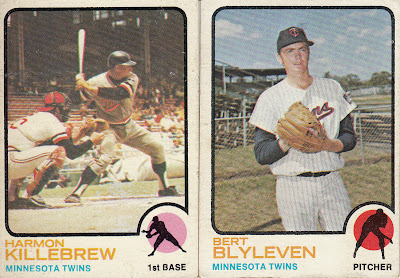 Two outstanding pieces from the '73 Topps set.  Previously Nick hooked me up with a beautiful Lefty Carlton card from this set, and now this pair of legends.  The more I see of '73 Topps, the more and more I love it.

I can't thank you enough for all these wonderful additions, Nicks.  Clearly, I benefited from your flea market and card show travels of late.  Thanks for keeping me in mind!