No Archives, No Problem 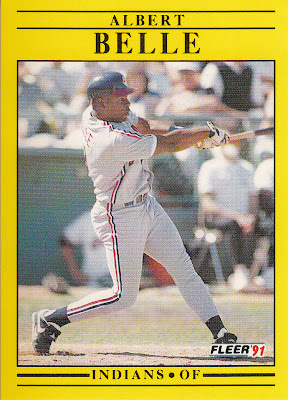 My wife is a saint.  I dragged her along to two different Wal-Marts and a Target looking for a damn blaster of 2013 Heritage this evening.  Naturally -- unbelievably -- I came up empty.  Three strikes and yer out, I guess, right?  I was not a happy camper to say the least.

But, what can you do?  Either sulk all night or pick yourself off the mat and blog about the stuff ya already got. Lord knows there is plenty of it that has gone horribly neglected.  So, I chose the latter route.

At a recent card show I snagged the 1991 Fleer Update box set for a cool two bucks.  Some might say I paid $1.75 too much, but I admit I'm a weirdo because I happen to like '91 Fleer.  Plus, there are plenty of cool players in this set that made me want to own it.

Take Mr. Belle above.  He wasn't featured in the regular Fleer base set, but here he is in the Update offering. This happens to be Belle's first Fleer card in which he's 'Albert' instead of 'Joey' (as he was in '89 Update and the '90 base set).  This card was actually a pleasant surprise to me, as I wasn't even aware the fearsome slugger was included in this set.

As for the rest of the best, I split the cards into two categories: rookies and veterans with new clubs.  Let's take a gander at the five best -- in my opinion, at least -- from each faction. 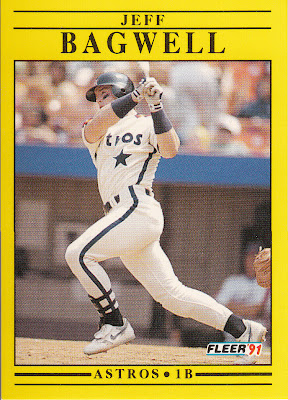 Perhaps the most important card from this set?  You certainly wouldn't be called out for thinking so.  Bagwell hacks away at Shea Stadium here. 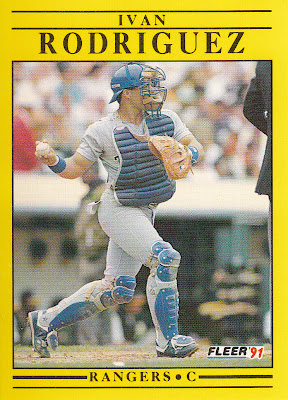 If you don't think Bags is the keystone card of the lot, then most likely you're casting your vote for this Pudge Rodriguez rookie.  Again, nobody's coming to flog you for believing such. 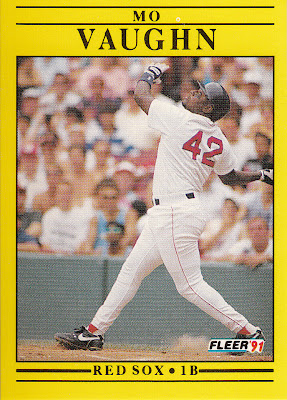 Quite a few of the cards in my box were miscut, condemning them to a life of off-balance vertical centering. Such was life in the junk wax era.  Fitting, then, that the photo Fleer chose for big Mo's card is, well, kinda off-center.  Still...it's got personality, and I like that. 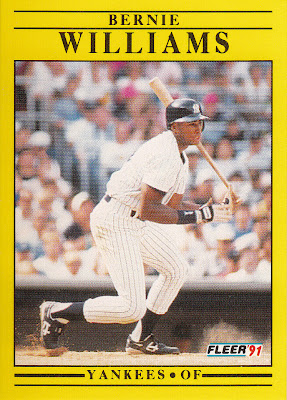 Unlike Topps, Donruss and Score, Fleer didn't include Bernie Baseball in their flagship set in 1990, thus this is Williams' Fleer rookie. 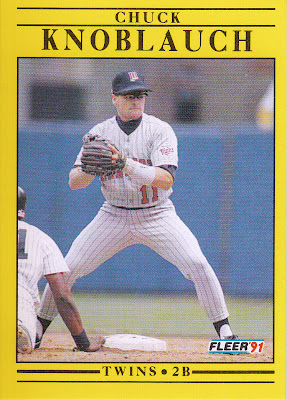 Knoblauch's rookies were a pretty big deal at the time.  And, in fairness, the guy carved out a pretty nice career for himself.  Unfortunately, many will only recall his time as a Yankee when he developed "issues" throwing the ball to first base.

Okay, how about the vets? 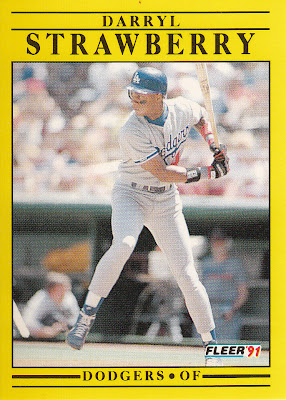 Would there be any doubt that Straw would find his way into my top five of familiar faces in new places?  Darryl's regular '91 Fleer card shows the lanky slugger in the midst of the Home Run Derby at Wrigley Field.  It's one of my favorite Strawberry cards from his entire catalog.  This one isn't exactly ugly either, though the uniform is slightly less attractive. 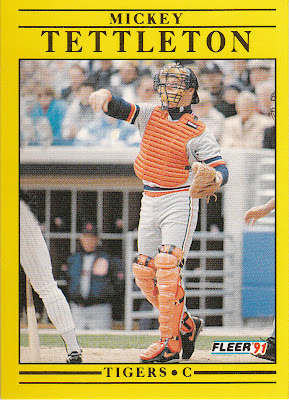 Mickey in action, sporting the brightly-colored catching gear of the Detroit Tigers.  Big fan of this card. 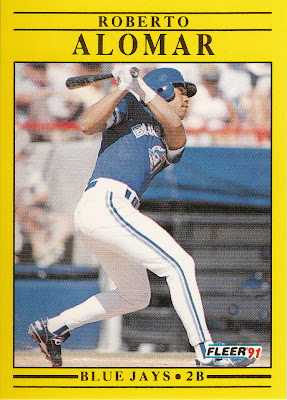 A nice big photo of Robbie Alomar here.  Though, it makes it seem like Alomar is scrunching himself up in an attempt to fit into the wild yellow frame. 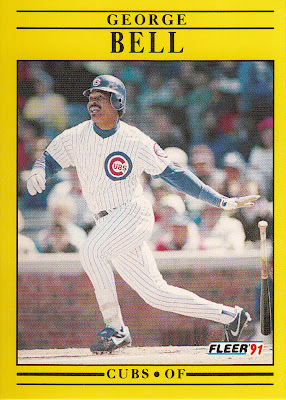 Just a wonderfully framed photo of the former MVP.  It would take a particularly concentrated effort to create an ugly baseball card when you're snapping pictures of a Cubbie on a sunny day at the Friendly Confines. 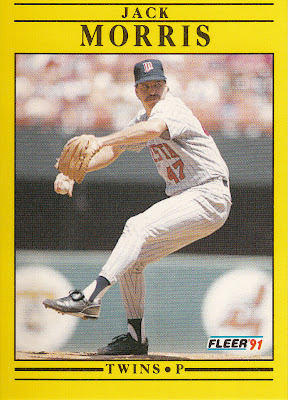 I've now showed 11 cards and this is the first pitcher.  And it's miscut, to boot.  No matter, World Series hero Jack Morris looks to be in fine form here.  You can miscut his cards, but you can't stop the man!

Wellp, it's not exactly the exciting 2013 Archives post I was hoping to write on this Friday night, but the failure of multiple retailers in New Castle County at least granted me the opening to flaunt these retina-burning beauties.

However, I may not be as forgiving if I don't see a blaster box of the new stuff on my next sojourn!