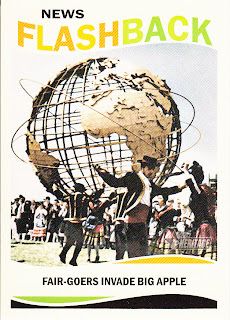 So, I'll admit it: I've gotten lazy with mailing out cards that I should be mailing to my fellow blogger pals.  In fairness, though, it's not like I had all the padded mailers sitting about and I was just neglecting to put two and two together.  Now that would be lazy.  Instead, I was all out of those yellow sunofaguns and hadn't found the time to mosey on over to Wal-Mart recently to restock

Thus, it came to pass, I motivated myself to swing by Sam's retail giant on my way home from work Monday get a 10-pack of mailers.  And, you know, since I was at Wal-Mart and they have a sports card section, I might has well swing by and...

Talk about barren.  When I tell you the card section was bare-boned, I ain't exaggeratin'.  It was about 75% empty, and the remaining boxes and packs scattered about were those annoying Japanese pokey-things and Magic: The Gathering decks.  What the hell, mate?!  Yes, they did have a few random blasters of '13 Topps and Heritage, but I wasn't in a blaster kinda mood.  I wanted a rack pack of some sort.  And there wasn't a one to be seen.

Oh well, anyways, I got the mailers and I got busy over the past couple days packaging and labeling.  Basically getting my act together.  Thus, I am happy to report that packages were mailed out today to the following states:  Pennsylvania, Illinois, Texas, Oregon and California.  If you happen to live in on of those states, you might be receiving something from me by the weekend.  Oh joy!

Well, not really.  I still had that annoying itch to purchase packs and rip 'em open.  It wasn't relieved Monday, which meant Tuesday arrived and a visit to Target was in order.  On the agenda, one of my go-to products: the Heritage blister (you call it a rack?) pack.

You know the drill, three packs of 2013 Heritage plus three black-bordered cards.  The latter being the main attraction, of course.  I'm a grade-A sap for the parallels, especially when it comes to Heritage, my favorite brand.

As you already saw, the '64 World's Fair card from the "News Flashback" insert set was among the cards I received.  Pretty cool, I might say.  The year 1964 is all right by a Mets fan's account, since it's the year Shea Stadium not only opened for business, but also hosted the Midsummer Classic.  To top it off, the World's Fair was hosted that year a stone's throw away from the (formerly) big stadium in Queens.  Thus, the Unisphere has become a monolith that one associates with the neighborhood of Flushing and the Amazin' Mets.

Speaking of the Mets... 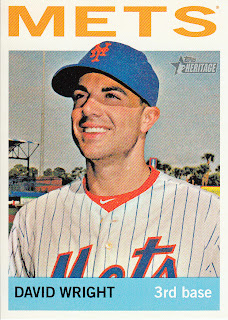 Already I have this splendid card of the New York third-sacker, but that one belongs to my Heritage set and will eventually take it's place in the 2013 Heritage binder.  For the first time, I had a Wright SP from Heritage to place among my DW collection.  Which, obviously, is terrific!

This was the lone SP from the three packs, but I also netted another of those attractive "New Age Performers" inserts. 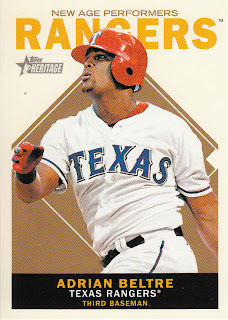 Not the most exciting player in my books, but an important cog to the Texas ball club.  Plus, I'd like to complete a page of these NAP cards for the aforementioned binder.  So every card counts!

Finally, the centerpieces of the package: 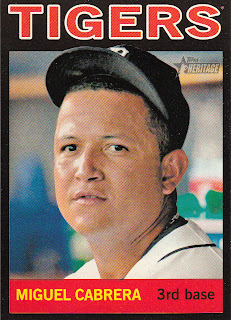 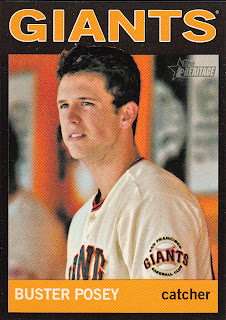 What a great trio!  The 2012 MVPs from the respective leagues -- Messrs. Cabrera and Posey -- and exciting young Cubs shortstop Starlin Castro.  Sure, I'd be lying if I said I wasn't crossing my fingers, toes and eyes hoping that Bryce Harper would find his way into this particular blister, but I'll absolutely take these three cards all day, every day.  I now have 17 of these black beauties; just one shy of two complete pages.  My binder goal for these black parallels is at least three pages.  So far, so good!

That's all for now, friends.  Thanks for checking in!