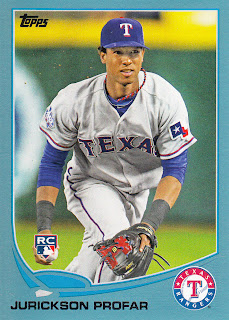 A big ol' Clubhouse "thanks!" to Kyle from a Long Beach, a reader of this very blog, for a PWE that was received over the weekend.

A nice grouping of cards, headlined by the above centerpiece -- the 2013 Wal-Mart blue parallel of recently called-up mega-prospect Jurickson Profar.  Along with Mike Trout's rookie cup card, this Profar rookie was surely going to be one of the toughest pieces to lasso of the remaining '13 Series One blues.  But, I can now happily cross it off my checklist.

Coincidence that he was called up the same weekend that I received this card?  Umm...yes.  But, no less impressive, I might add. 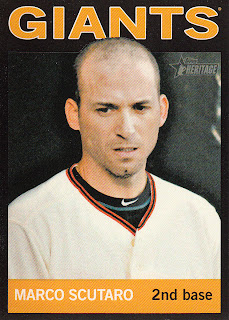 Blue isn't the only hue on my parallel-lusting radar, as 2013 Heritage black-bordered parallels also have my collecting fancy these days.  Scutaro, the 2012 Fall Classic MVP is a nice addition.  And, if I'm not mistaken, I think I'm up to 18 of these black parallels, or two binder pages.  I'd love to complete three, if not four (or five or six or seven) black pages for my eventual 2013 Heritage binder.

While we're on the topic of Heritage and chasing sets and whatnot...

It's been a while since I added any new cards to my 2011 Heritage count, so I'm glad to receive these.  In case anyone should wonder, I need just 45 cards to knock out the base set and one-too-many SPs to put that particular quest to bed.

If you'd like to help out with any of the aforementioned sets, feel free to drop me a line.  I'm sure we can work out a trade!

Last but not least, a couple of bonus cards were in the envelope.  The five above were the principles, but Kyle was good enough to throw in a Johan Santana "Topps 60" insert (not pictured) as well as this snazzy card of one of my absolute favorites: 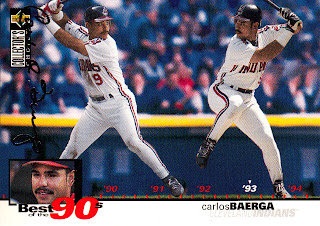 A silver-foil signature along the left border makes this ultra-cool card even better.  Ya gotta love Collector's Choice, amiright?  Baerga's impact may not have endured for the entire span of the '90s, but he was a freakin' wrecking ball of greatness for the Tribe in the early portion of the decade.

A nice, tidy trade.  Kyle, thanks for reading the blog and, of course, thanks for swapping cardboard with me. Let's do it again soon!