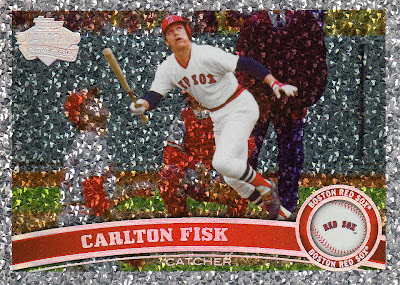 I went to my local card shop on Friday to pick up some penny sleeves (I swear, it was just for penny sleeves!). Buuut, since I hadn't been to the place in quite some time, I figured I ought to comb over the 50-cent bin.  Half a buck isn't the best deal known to man for most cards, but every once in a while I find cards in there that I'd pay quite a bit more for.

The above Carlton Fisk sparkly SP is a prime example.  I nearly yelped with joy when I found this thing. Understand, I have long been pining for this card in one of its forms -- regular stock, silver sparkle or cognac. I've almost pulled the trigger for it on COMC on various occasions.  And now I don't have to!

Is that not one of the best photos ever used on a baseball card?  As equally artistic as it is historic, I think you'd probably have to choose this image from the '75 World Series if you could only choose one moment to memorialized Pudge's HOF career.

I'm just thrilled to add this Fisk card to my collection! 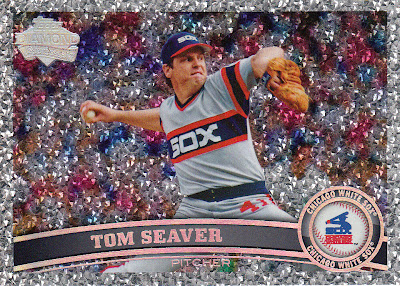 Another short-printed sparkly!  Finding cards like this totally make the hunt through a half-buck box totally worth it.  Tom Terrific will always be first and foremost a Metropolitan, but it's cool to see him in a Sox uni from time to time.  These are some of ugliest uniforms from a decade populated with atrocious fashion.  But, if anyone can make it look kinda bad (bad, as in good, like the kids used to say), it's George Thomas Seaver.

A touch of silver now leads us to taste of cognac... 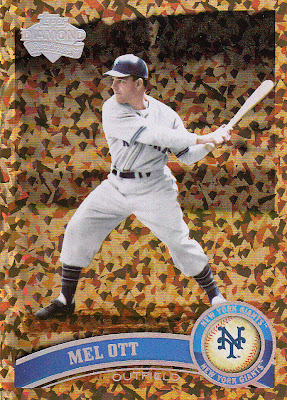 I'm really surprised the card shop guys didn't pluck these SPs and put 'em inside the glass cases with an inflated price tag.  Hey, I'm not complaining, but it's curious.  Especially considering this is the same store where they try to hawk a 2013 Topps Ryan Howard base card for a buck-fifty.  Instead, little treasures like this Mel Ott lay side-by-side with a 2011 Topps gold card of Pedro Beato and a "Cards Your Mom Threw Out" issue of Evan Longoria.  Like I said, I'm not complaining! 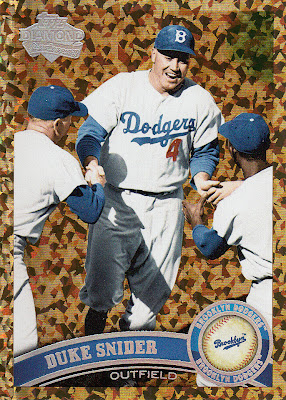 And one more cognac Diamond Anniversary legend.  I'd be lying if I said I didn't basically turn the box upside down looking for another silver or cognac HOFer, but settling for four isn't a bad day's work.  I absolutely love this photo Topps selected for the Duke of Flatbush.  I really hope Topps continues to produce these legend variation cards.  I know they did it last year, but I'm not sure if it carried over for this year.  Anyone know? 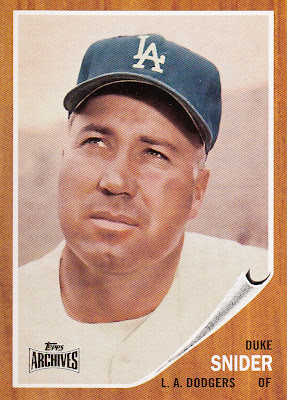 I also found some of the Archives reprints from the 2012 Archives set.  I wanted to grab 'em all (there were about six), but I settled on the Snider.  [Ed. Note: Two Dukes is better than one, right?]  Maybe my next trip will produce another one or two of these reprints. 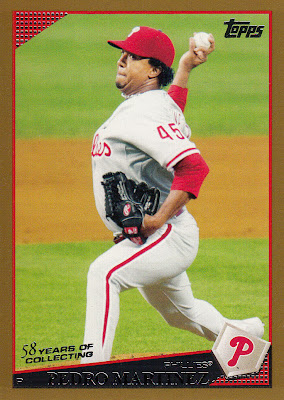 Nick of Dime Boxes fame likes to refer to cards of this ilk as "sunset" issues, and I kinda like that term.  My favorite pitcher of my lifetime is Pedro Martinez, and finding a gold parallel of his sunset card is a pretty special occasion. 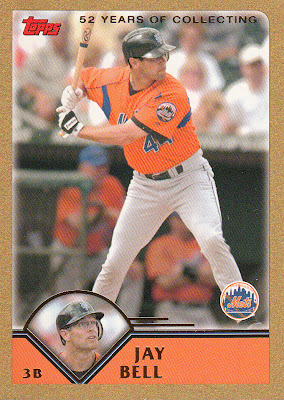 While Jay Bell isn't exactly on the same pedestal as Pedro Martinez, he's still a player I've always admired.  And I was very happy when he became a Met, even though he didn't have much left in the tank by that point. Regardless, I'm a collector of his cards and have long sought a copy of his 2003 Traded sunset card.  It's also one of the only cards (the only?) to feature Bell in a Mets uniform.  Well, in this instance, I had to "settle" for the gold variation.  A pretty good concession, I think. 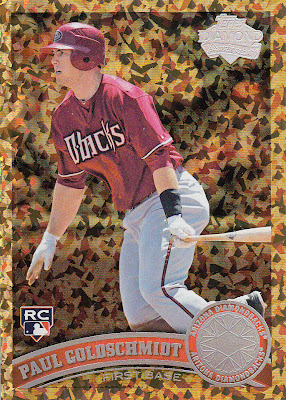 Back to the cognac for a second, and a pretty nice rookie card to have of Paul Goldschmidt.  Not to mention a great addition to my cognac collection.

Finally, a card that's probably not worth a 50-cent price tag, but it's one of my favorite action shots from this year's Topps set.  So... 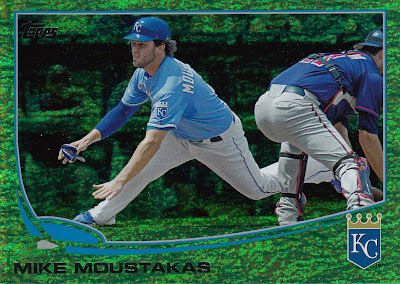 Ya know, you can barely find a can of soda for 50-cents anymore, so I'm not gonna feel bad about giving into my urge to snag this emerald variant.  Moustakas is having a pretty wretched year, but at least his ballcard is pretty.

All in all, one of the more satisfying trips to my local hobby shop.  And, yes, I even remembered to buy those gosh-darn penny sleeves!