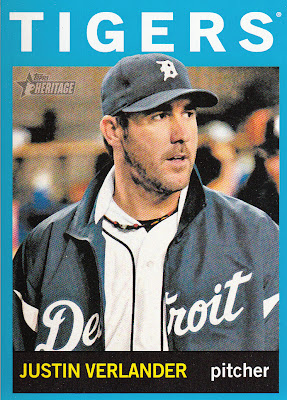 My eBay voyeurism of late had me looking for the three shades of parallels from 2013 Heritage -- my favorite Topps product of the day.  I've been pretty candid about my appreciation for the black-bordered cards that are found three-per-pack in the Target blister packs.  However, I'm also fond of the blue and red-bordered specials that Wal-Mart and Target feature, respectively.  But, at just one parallel per blaster, the red and blues aren't as easy to muster.

And that's why we have eBay, amiright?

For less than a buck per card, I found a nine-card lot of the Wal-Mart parallels.  Mr. Verlander was one of the inclusions, but here's a look at the entire haul: 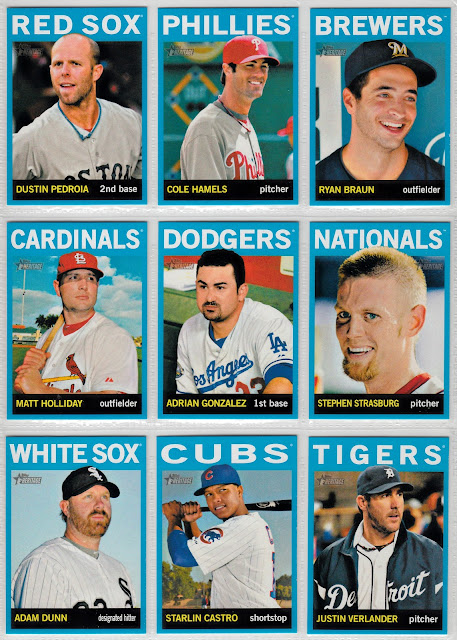 Only the Pedroia is a duplicate, and I can live with that since it's already earmarked for another blogger.

As with the black-bordered cards, I'd like to construct a page or two of just these blue cards for my upcoming 2013 Heritage binder.  The cards above plus the three I already owned means I have 11 unique Wal-Mart parallels out of the 25-card checklist.  Which also means I'm shy seven cards for two full pages.  Ugh.  Either that or I just settle for one complete page, shuffling a couple of these directly to my player collection box.  But what fun is that, I ask?

Hey, if you have any spare color-bordered parallels from '13 Heritage cluttering up your space, give me a shout and we'll work out a deal!  Take a look at my updated "Wanted" page to see what I've already got and what I need.

Thanks for checking in!