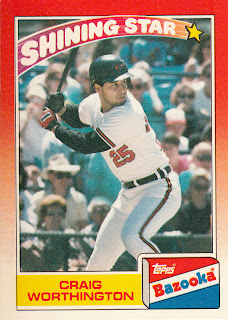 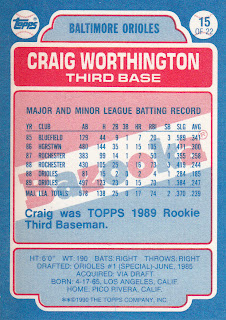 I've caught the eBay bug recently, scouring the world's favorite online auction site in an attempt to fatten up certain areas of the ol' collection.  Among those areas are oddball sets from the late '80s and early '90s.  I guess unearthing my oddball collection recently and starting up this spotlight feature kinda re-ignited my longing for all cardboard odd and hokey.

The 1990 Bazooka "Shining Star" set consists of 22 cards, split into very distinct factions.  The first nine cards of the checklist feature a who's who from the 1989 season, including both league's MVPs, Cy Young winners, batting champs, home run kings, and stolen bases leaders.  [Ed. Note:  Kevin Mitchell was both NL MVP and the league home run champ, thus the odd number of cards.]  The latter 13 cards are dedicated to the game's up-and-comers.  Ten of those slots belong to the Topps All-Star Rookie crop (aka the Rookie Cup cards) from the '90 Topps flagship set.  Included in that mix is Baltimore's Craig Worthington who, as you can read above, was Topps' choice among third basemen.

Two of the three remaining cards are Baltimore Orioles, meaning three cards among the 22-card set are Birds.  [Ed. Note: For those wondering, the non-Oriole of the trio is Todd Zeile, who had a "Future Star" card in the '90 Topps set.]  No other team was represented by more than two cards. 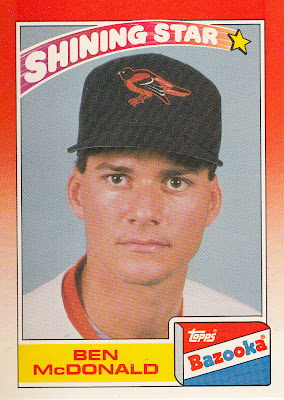 Ben McDonald was the top overall selection of the '89 amateur draft and, fittingly, had a Draft Pick card in the '90 flagship set.  He had a quick taste of minor league ball before hustling his was to Baltimore by season's end in 1989.  If you collected cards around this time, you remember how much fanfare surrounded McDonald and his cards. 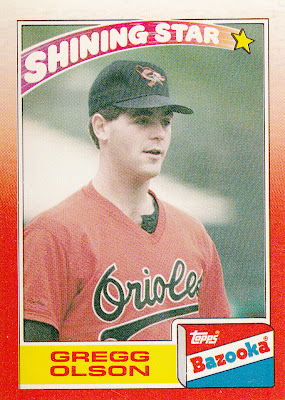 Likewise, Gregg Olson was a pretty hot commodity in 'nem days.  His 27 saves during the '89 campaign set a new benchmark for rookie closers.  He not only snagged AL ROY honors, but even finished fourth in Cy Young voting.

Boy, at the time, if you were a fan of the O's you had to be loving life.  Not only did your club already have one of the elite performers in baseball -- you may have heard of Cal Ripken? -- but they had a good-looking young third-bagger plus a duo of pitchers who projected to dominate the start and finish of ballgames for many years.

However, life is never that easy, is it?  Though Olson ran off a string of quality seasons as Baltimore's closer, McDonald won but 78 games over a nine-year career in the majors and Worthington fizzled in a big way after a 15-homer performance in '89 (he only had 16 more homers for the duration of this big-league time).

Okay, so maybe these three didn't produce greatness for the denizens of the Old Line State, but they sure gave us collectors something to buzz about.  And even all these years later, it's fun to think back on this period, especially for someone like me, who was a lad just 10 years old.  The baseball card mags and assorted publications of the time showcased these guys, the pitchers especially, like crazy, so I couldn't help but lust for as many of their cards as possible.

And ya know what?  I still get excited about seeing a Ben McDonald card from 1990 because, somewhere deep down, the 10-year-old me is still at the controls.  And he's still hoping that Big Ben delivers the goods thus paving the way for my untold fortunes when his baseball cards skyrocket in price and rarity.  [Ed. Note: Phooey to reality!]

I like this Bazooka set a lot, and I was really happy to snag it for $1.99, plus a couple bucks for shipping.  The memories alone are worth the price.  Plus, I am devoutly partial to cards and card sets from 1989 or '90.  What can I say; baseball cards impacted my life like religion when I was nine.

I'll likely show off a few more of the cards from this set in the near future.  It's a neat player list with some pleasing Topps photography.  Not too shabby for a series that was issued one-card-per-box of Bazooka gum.

An understatement to say this is a satisfactory edition to my oddball vault.  Orioles fan or not...