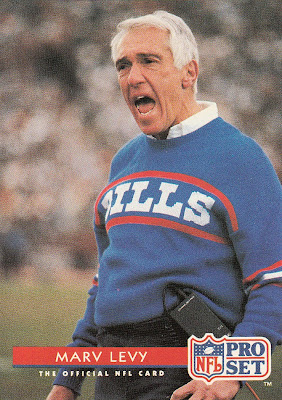 I was a lot angrier and much more animated in the aftermath of last week's Bills loss to the Falcons than Mr. Levy appears to be on this 1992 Pro Set card.  I even contemplated throwing a glass of root beer through the television...and I was at a restaurant, so I guess it's a good thing I didn't.

But, more so than for his facial contortions, I posted this card of the greatest coach in Buffalo Bills history because of the sweater.  Yep, the sweater!  See, we here in the Northeast and Mid-Atlantic are about to have our first encounters with winter weather today.  For me and the rest of folks in the Philly-Baltimore-DC strip of the map, we're mostly going to deal with a "wintry mix" of snow, sleet and freezing rain, while points further north will get a decent amount of snow.

And, while the Bills will be playing down in splendid Tampa, Fla. this afternoon, I felt it appropriate to post a few cards of players braving varying degrees of Old Man Winter.

Coach Levy had the right idea with the comfy, cozy sweater.  But, someone ought to explain to Jim Kelly that the ol' hockey 'sweater' isn't exactly the same thing... 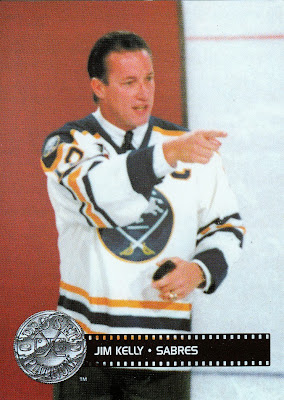 Of course, a sweater or jacket is appropriate to keep your arms and your core warm, but don't forget your dome! 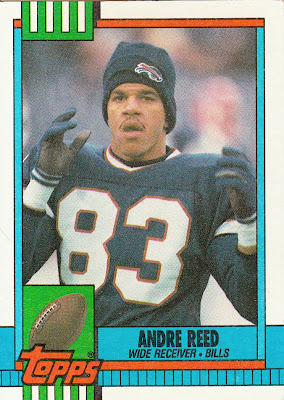 But, weather--cold weather particularly--is a prickly pear sometimes.  And even though you cover your body and the top of your head, the conditions will still find a way to get at you. 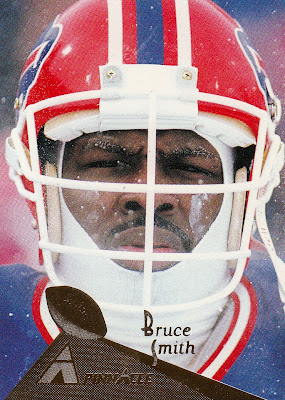 I don't know about you, but those are just about the frostiest cheeks and eyebrows I've ever seen.  This photo was taken during the 1993 season, either from the late-season home game against the Jets or the Divisional playoff round at Rich Stadium versus the Raiders, which ranks as the coldest game in Buffalo Bills history.  I'd wager it was the latter.

Anyhow, if you're in a place that's getting a wintry blast today, I hope you find a nice, warm spot preferably in front of a television showing football.  (Wings and beer wouldn't be a terrible idea, either!)

As for the terribly maddening 2013 Buffalo Bills, last Sunday's odious loss to the Atlanta Falcons in the drab and dreary Rogers Centre in Toronto pretty much sent the Bills to the NFL graveyard for yet another season.  While technically they're still alive in the playoff chase, it's going to take an act of God for them to weasel their way into the postseason.

Buffalo stands at 4-8, meaning the best they can do is finish at .500 for the season,  Might that be good enough to qualify for the AFC's second Wild Card?  It's not impossible given the collective quality of the teams chasing that spot.  But, before any of us dreamy fans think about Buffalo winning out to end the season, the Bills must first prove they can A.) win a road game with EJ Manuel at the helm, and B.) win consecutive games in any denomination.

Heck, let's start with proving they can beat a subpar team.  It didn't happen last Sunday with Atlanta, and today they are playing against a 3-9 Tampa Bay side that had won three straight before running into the Carolina Panthers buzz saw last Sunday.  So it's not like the Bucs are a bunch of chumps waiting to get smacked around.  The Bills will really need to perform well in all phases to eke this one out, and that includes taking care of the football (Stevie Johnson *cough* Scott Chandler *cough, cough*).

Mike Glennon and EJ Manuel were both QBs selected in this past year's draft, so that's one interesting angle for this game (and there aren't many interesting angles to the game if you're not a fan of either team).

Above all else, I'm interested in seeing how this group of Bills bounces back after snatching defeat from the jaws of victory last week.  Had they won, Buffalo would have been sitting in a good position, just one game out of the final playoff spot.  That specter will be hanging over the team as they hit the field today; to what degree will be key.  This is a mostly young team, with virtually none of the players having played an important December NFL game.

Translation: I ain't too confident!

My Week 14 Picks:  My Week 13 picks were nearly as poopie as the Bills'  performance in Toronto.  Let's hope we both bounce back today!  Lemme get the Patriots (-10) to roll up a pretty sizable win against the Browns; the Seahawks (+2.5) to nip the Niners; and the Saints (-3.5) to end Carolina's winning streak.