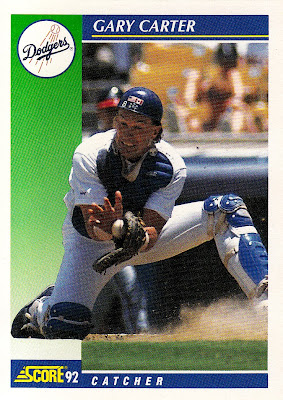 At the last card show I attended, I found some cards of my all-time favorite catchers to add to my player collections.  I mean, who doesn't love catcher cards?

The above Gary Carter was one on my radar for quite some time.  I can't believe it took me so long to track down a copy of this awesome card of the Kid during his Dodger days.  While it isn't necessarily in the conversation of my favorite junk wax-era sets, 1992 Score churned out some pretty incredible cards.  Especially of the "catchers in action" variety.  The Todd Hundley from this set also springs to mind, as it's probably my favorite card of Hundley. 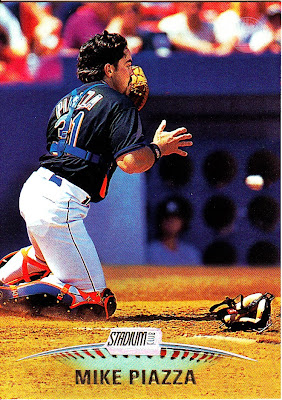 Mike Piazza's name doesn't readily bring to mind visions of excellence behind the plate.  No one will ever confuse Piazza's defensive abilities with that of a Johnny Bench or Ivan Rodriguez, after all.  Rather, Mike produced shock and awe at the dish with a bat in his hand, and many of his cards feature Piazza in the throes of such activity.  Here, TSC gives us a glimpse of Piazza getting down and dirty in the catcher's gear. 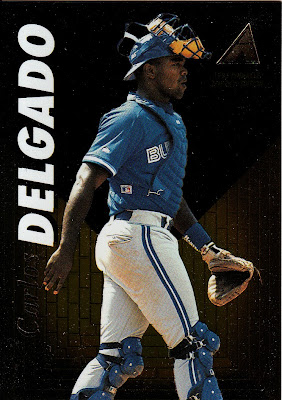 Carlos Delgado was a catcher for a hot second in the big leagues before wisely being shifted 90 feet away to his permanent home at the first base bag.  A good number of Carlos' early cards still feature the Puerto Rican slugger in the shinguards and chest protector. 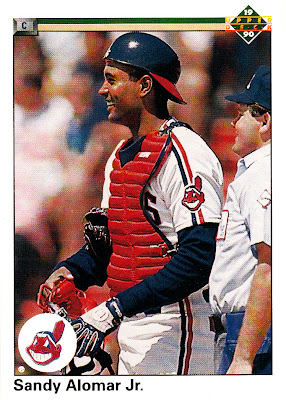 It would appear Sandy Alomar Jr. and the home plate umpire are sharing a light-hearted moment here.  This is one of two cards of Sandy in the 1990 UD set, with this one falling within the High Numbers portion of the checklist.  The other features Alomar in Padres duds. 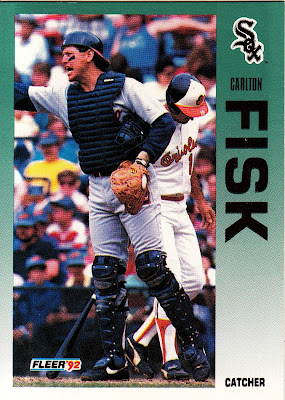 Lastly, Fleer did a super job of capturing a badass moment of competitive greatness.  The demonstrative Pudge Fisk looks pretty heated here, perhaps announcing to his fielders the number of outs after tagging out an unfortunate Oriole at home plate.