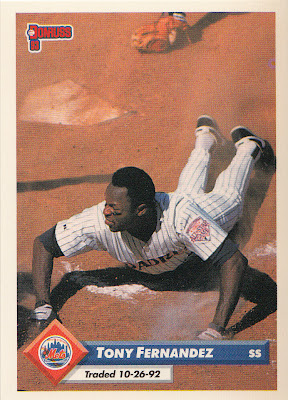 A pair of parcels arrived this past week from Bert Y., the good soul who operates Swing and a Pop-Up way up New Hampshire way.  That's right, not one but two pieces of mail.  In the same week.  He's a quick worker, what can I say?

The first was a bubble mailer that had a nice little stack of assorted player collection needs, but also some past Mets favorites (and not-so-favorites) from the last couple of decades.

This '93 Donruss Tony Fernandez has always been one of my favorite cards, not because of who's on it but because of the epic photo choice.  At first glance you might be tempted to think that Fernandez is wearing a Mets uniform, but it's actually the Padres uniform that he donned for the '92 season.  Thus, the "Traded 10-26-92" info bar at the bottom of the card.  Hey, I'll take that any day of the week over a poor Photoshop or airbrush job.

As for Tony, he played but 48 games as a Met, putting together a whopping .225 average over 173 at-bats. He was mercifully traded to Canada in June '93, where he went on to help the Blue Jays win the Series a few months later.  Good for him, I suppose. 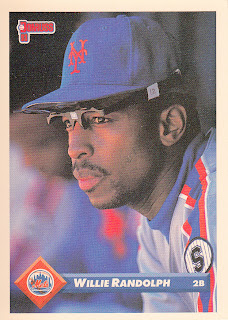 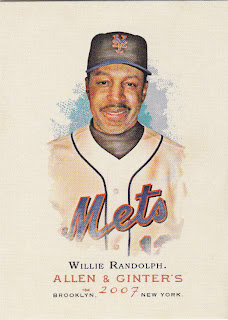 I've also always liked Willie Randolph's 1993 Donruss card, mostly because it gave you a close-up look at the Bill Shea commemorative patch that the Mets wore for the '92 season.  Shea was an area lawyer who was largely responsible for helping bring N.L. baseball back to New York City.  God Bless him.  He passed in October of '91.

Instead, let's focus on something uplifting, like some handsome cards from 2003 Upper Deck.  Shall we? 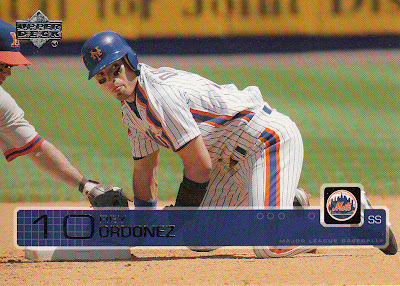 An incredible card of Rey Ordonez, one I have never seen before.  Obviously a throwback jersey day at Shea during the summer of 2002.  But check the threads on the fielder.  Who in sam hill are the Mets playing?  Looks like the Durham Bulls' color scheme to me, but I believe this to be the then-Florida Marlins donning the uniforms of a one-time professional (perhaps minor league?) ball team that used to play in Miami.  I only vaguely remember this game, and I tried some Googling, but gave up after about five minutes. 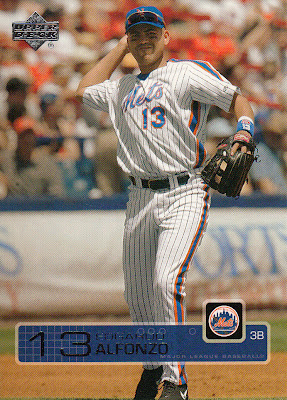 Same sunny day at Shea, but this time we find Edgardo Alfonzo in the midst of a warm-up throw to first base.  I didn't love the Mets unis that had the thick blue and orange piping down the sides -- I much prefer the classic Met look -- but every time the the occasion arises that these duds should be resurrected I enjoy them. 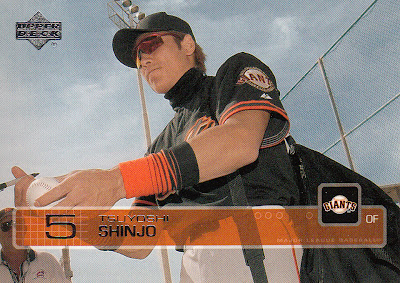 Shinjo!  This guy was a lot of fun to watch, and he's nearly as fun to collect.  He wasn't a superstar like Ichiro, but he played the game with flair of a rock 'n roll front man, and I liked that.  I would certainly be among the anxious throngs lined up to grab some ink from Tsuyoshi.

Okay, so those were a few of my favorites from the yellow mailer from Bert.

But, earlier today a PWE with a familiar New Hampshire postmark arrived... 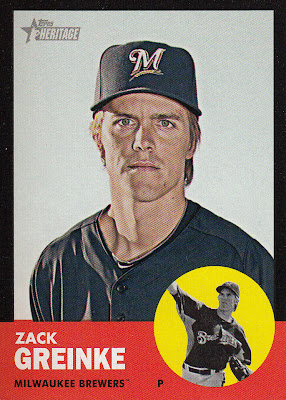 Yesss!  Bert pulled this from a repack he cracked open recently.  And, naturally, I made sure I was first in line to beg for it.  Not that I'm a Greinke or a Brewers collector, but it's a 2012 Heritage variation.  You must know by now I kinda have a fetish for all things 2012 Heritage, especially the colored-border parallels.  I have three full pages (one-sided) of these Target retail parallels, and I guess I'll be trying to finish a fourth now.  Hey, I have no problem with that, as I'm in no hurry to close the book on this set!  [Ed. Note: Besides, Mark's lazy butt is still five SPs short of a full deck anyhow.]

Muchos gracias for the cool cards, Bert!  I look forward to swapping some Archives cards with ya this summer!